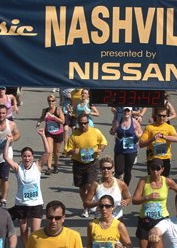 Me rocking the double fist pump at the finish line

There are so many things about the day of the half marathon that I want to document forever. Like how I almost cried because I got stuck in a traffic jam the morning of and how I was mean to my husband in lieu of, or in addition to, crying. But five minutes before the traffic jam I was so happy and endorphin filled that I was rocking out to country music in my car (it's a great day to be alive, you know the sun's still shining when I close my eyes, there's some hard times in the neighborhood, but why can't every day be just this good). And I was really believing in the lyrics until I came to a complete stop on the interstate and it took me an hour to drive four miles.

The stress was all for naught because I made it in plenty of time to walk around aimlessly looking for food because I could have sworn there would be some there, stand in line for twenty minutes to use the dirtiest port-a-potty ever known to man and woman, retie my jacket around my waist six times to make sure it wouldn't fall off, and make five new friends in my corral as we pushed to the starting line.

The running part was great too. The funny thing is that I am sore in really weird places today, and I am trying to trace them back to the race.

Sore spot #1, my jaw. I was chewing gum, the only "food" available in my car. But I chew gum a lot, so I thought that the sore jaw might also be related to something else, like smiling at all of the spectators on the roadside. They were so friendly, except the frowny, bored-looking group between miles 9 and 10. Maybe they didn't realize how long they would have to wait for their friends to run by? Conclusion: we should initiate a gum chewing, smiling marathon. It is apparently even more taxing than the running.

Sore spot #2, upper back. My low back gets sore a lot when I run, probably because of some poor posture issues, but my upper back is always fine. Today, it feels like I was in a rowing event. Possible explanation: all of the high fives and fist pumps. Every single kid that had their hand out for a high five got one from me. Also, I think I did more fist pumping than necessary whenever there was a large group of people cheering. I wanted to give something back to let them know they were appreciated. Conclusion: I just need to be in the middle of a large cheering crowd to get a really strong face and upper back. Or move to the Jersey shore.

Sore spot #3, left foot, middle toe. Not even worth considering why.

Oh, and my legs kill, but I expected that.

My favorite parts of the course were the shaded neighborhoods. I kept thinking that I would see someone I knew standing in their yard. You know how you go back to your childhood home and expect to walk into the store and bump into people you know. It rarely happens, but I like to be mentally prepared for unexpected reunions, which makes them expected, but whatever. And, no, I didn't spot anyone familiar, but I saw some very funny signs, which made the race so much less boring. Running sometimes equals boring for me, but running with funny signs to read equals awesome. And I heard about some even better ones after the race from our friends who ran. Examples: "Worst parade EVER" and "If this were easy, it would be called 'your mom.'" You know I like your-mom jokes. Thanks, Nashvillians.

Oh, and the hills! I was so nervous about tackling the dreaded hills, but if you are from Birmingham and have run outside, don't sweat the hills of Nashville. Since we live in Vestavia Hills (note the Hills in that name), I should have figured that I would be prepared. The worst hill for me was at the very end. I was saturated with physical and mental exhaustion, and that hill felt longer than the rest of the race combined.

And the bling! I'm not sure why, but I wasn't expecting bling at the end of the race. I thought you only got a medal if you were top three, but for this race, they gave you a seriously blingy medal for crossing the finish line. This was the closest I've ever felt to an olympian. Bring on the podium and the national anthem.