It took a discount to make me sign up for my first marathon. I had contemplated it. Thought about how sore and awkward it would make me. Pictured the finish line with my family cheering me on with a makeshift sign (or not making it in time, or making it to the opposite side of the divided road). Hoped for delicious treats at the end and lots of fluids and ice chips handed to me (with minimal spills) by volunteers. Wondered if anyone would be holding a sign funny enough that I could remember to blog about it afterwards. Contemplated wearing very colorful socks.

In the end, there was a sale on National Running Day, and I couldn't pass it up. With the sale, it was cheaper to run the full marathon than the half.

The first time I knew I could do it was when I finished the half marathon in Nashville, and I went out to the parking lot. I was alone and called my friend who I severely missed to tell her about everything. For some reason, even though I had just made it through the biggest physical challenge of my life and should be super happy and endorphin-filled, I couldn't stop crying. During the race, I had worn a shirt I made in honor of Evan, my friend's son who drowned two and a half years ago just before his second birthday. My friend was going to run with me, wearing her shirt too, but she got injured. So I was running for both of us and for Evan. During the run, I felt that I needed to run harder to pass more people so they could see his sweet face and know that protecting little people from accidents is important. There were other times during the race that I looked up to the sky and thought about the glorious gift we are given to live on this earth, even if our time is short (bur preferably as long as possible). Endorphins have a way of making you feel closer to heaven. After talking through some of this with my friend, I dried up the tears and started out of the parking lot. 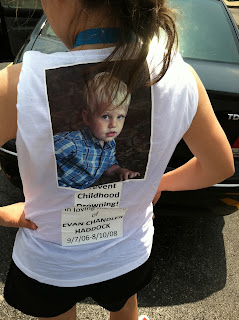 That's when I saw him -- a man at least 25 years older than me who had just finished the full marathon. His only sign of pain was double knee bands, but he otherwise looked happy and extremely healthy -- and tan. So in the time that it took me to grab some snacks and cry in the parking lot, he had run another 13.1 miles. That was the moment I knew. If this guy, who has lived almost twice my life span (this is a broad estimate generated to make me feel younger), just finished the full marathon, then I will too one day. Isn't it interesting the effect that a random elderly gentleman can have on you? He will never know that he was the deciding factor. 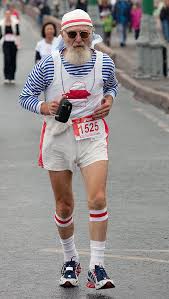 Source
Possibly the same man, minus the tan

Then later I questioned that decision when I overheard two race participants say a man collapsed (and possibly died, but I don't think that part of their story was true) in front of them at mile 9.

But it's done. Payment made, waiver signed. November 5th in Savannah. For now, this is it. I plan to do one marathon and go back to regular living after that. Unless you count next year's intercontinental marathon in Istanbul. Let's just say sometimes I like to set my eye on a prize that Amory thinks is partially ludicrous.
Posted by Yo Momma Runs at 2:32 PM