In the midst of training for my marathon, J (my bro) asked me if I wanted to run the Go Commando half marathon in Clarksville, TN, on Oct. 15th. Where 13.1 miles at one time felt like an eternity of outer darkness to me, it now seemed like he was asking me to skip along a rose-lined path. That's what happens when numbers like 18, 19 and 20 crop up on your Saturday long runs.

I'm not saying this came easy. This came with a lot of awkward moments of wetting myself a little when I had to go really badly but no bathroom was available. (I'm putting that out there on the world wide interweb to keep it real) It came with other moments of getting lost in someone's yard trying to find a sidewalk connection, only to then accidentally run in front of that person's car as they were trying to exit their driveway. Police may have been called. Not least, it came with hundreds of miles put in at a crappy little indoor gym track (for the sake of babysitting) that would drive most people loco. I'm about as close to that as I am to the marathon, which means I just got back from crazy. And it was a fun trip. 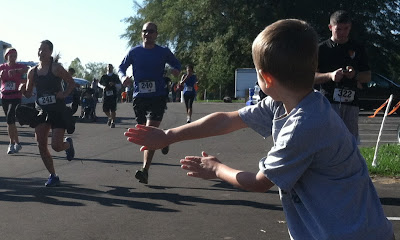 This was the first year for the Go Commando race, and about 450 people ran the half marathon. Our official time was 1:45:59, and we came in 121st and 122nd. Even though our times were the same, I was the one who came in 122nd. I demand a recount! I have one deceiving picture (above) that makes it look like I could possibly run faster than J, but that is very untrue. Occasionally I would find enough oxygen to eek out that we needed to slow down our pace, but for the most part, the run felt great. Running with J definitely forces me to up my running ante.

Despite the race description saying that the course was flat, there were lots of hills in the beginning, but then it flattened out towards the end. There was an occasional spectator who looked like he/she just happened to accidentally walk outside and wonder what the heck a bunch of people were doing running down the street. Sometimes we waved with no response from the onlooker, indicating that disturbing them in their native habitat might not be welcomed. There were several groups, like lady steppers and cheerleaders, who came out to cheer us on, and there was only once incident of a guy yelling really loudly at law enforcement that he had places to be when he couldn't get through a blocked intersection.

The course had some weird zig zags in the beginning around the park, and we had to double back at the end, which wasn't super exciting, but the country roads and bridge that we ran in the beginning of the race were really a perfect slice of southern scenery. 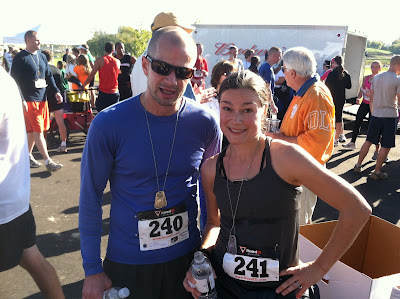 This race was full of super fit military people, one of whom ran the entire race in a gas mask for team RWB. He was trying to set the record for the fastest half marathon time in a gas mask. I'm guessing there isn't  a ton of competition in that category.

In summary, definitely run a race with a sibling or friend. It takes away a ton of the anxiety of race day.