Now that I can walk again, I thought it would be a good time to sit. And post something. If you ever want to have the best weekend of your life, just run a marathon. It hurts so good. Finishing was almost identical to finally pushing your baby out of darkness into the light of your hospital room. It's so painful, and you are almost positive that it will never end, but when it does, it's hard to remember what just happened. All you know is that you have a medal, or a baby, and all of those endorphins your body produced to cover the full-body pain are now just hanging around wanting to make you a nice person to your family again. That's fortunate because some people get really crabby leading up to races because they are anxious and fail to sleep soundly. Some husband's may mention this to their crabby spouses, which could increase crabbiness, if you are like that. I am a firm believer that anything I say or do will be totally forgotten by me and my loved ones when replaced by an awesome medal, I mean baby.

The deets:
We left around 9 on Saturday morning, figuring that with the six-hour drive and hour added for time change, we would have plenty of time to make it to the expo closing at 7 p.m. Except that it took us much longer than that because of wrecks and general interstate messiness south of Atlanta. Luckily, the expo people extended the hours until 8 p.m. We made it just a smudge before 7 to pick up my race packet, but it was nice to know that there was that extra hour in case traffic got crazier. Traffic leading out to the expo was similar to what we had seen all day, backed up and slow, so we weren't that shocked by it. Judging by Facebook comments, a lot of people were annoyed by the expo traffic. I was just annoyed that we had been in the car all day with four whiny small people, so the expo felt like a huge, stretch-your-legs relief. I was also sad that the actual expo part of the expo closed at 7, so no shopping for over-priced running gear. Super bummer!

We stayed with a friend, which made race morning ultra low stress (which is good because I had a hard time sleeping the night before). They knew the city and routes well and dropped us off a couple blocks front the start around 6:45 a.m. I had plenty of time to meander, use the port-a-potty, freeze, and get in my corral. I shed my donation shirt and pants a few minutes before 7:30, and we were good to go.

Miles 1-14
My pace was averaging 8:30. For the most part, I was silent and focused on weaving through folks. I don't know a lot of running manners, but I just tried not to get too close to people and pass when my elbows wouldn't hit theirs. It seemed to work out ok. Since I was running by myself, I would find people to follow. If I liked your pace, I would follow you for a while. It gave me something to focus on. Around mile 10, I met some people from AL, and that helped distract me for a mile or so until the half/full marathon split. I finished the half in 1:49. I knew my family was planning on meeting me at mile 14, so I was happy until I didn't see them there.

Mile 14-18
Starting to wonder if I will see my family. Decided to look at my phone and saw that they messaged that they kept missing me, so I gave myself permission to slow down a smidge and told myself that I would get a little break when I saw them and stopped to take pictures. Finally, they were at mile 18. I've never been happier to see them. Ever. 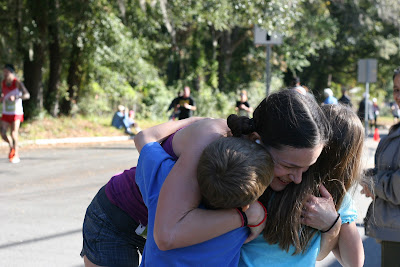 Mile 18-20
Really starting to feel the burn. Mentally it got hard here because I knew that I had never passed 19 miles in training (I missed my 20-miler because of the a foot injury).

Mile 20-26.2
I slowed way down because of cramping, but I got one final morale boost from the family at 21.5. I almost threw myself on the ground beside them and refused to get up, but Amory kept yelling at me to run. Easy for him to say, right? We had to run a lot of this mileage on a lonely, uphill interstate with no people to prod us on. Also, there was a strongish headwind to make it more fun. This is where I saw a lot of people vomiting. They may have been vomiting earlier, but there were places to hide. On the interstate, there was lots of vomiting right in front of you. Because my legs and feet were cramping so bad, I moved to a walk/run model that hurt my time a lot, but at this point, my only goal was to finish. I would run until the muscles were so tight that I couldn't stand it any more, and then I would walk until they loosened up. I tried to run on the side of the road so that I wouldn't get in the way of other people. This also meant that I had to dodge more vomit piles. Did I mention if you are nauseated, don't read this segment?

I was in a daze as I crossed the finish line. My family and friends were yelling at me and giving me high fives, but I didn't even notice who they were. I was so happy to be finished so that I could stretch for a long time! I'm not sure if it was missing some of my training runs or not eating enough bananas or what, but my muscles were so cramped. I finished in 4:03, which I feel like is a great start for the marathon phase of my life. Immediately after crossing the finish line, I decided three things.

1. I have to run another marathon. Part of me wants to prove that I can even out the time of my first and second halves of the marathon. I want to run the same speed for both halves. Or not have to walk so much, or at all, at the end. Another part of me just wants to feel that great again. Although I was so dazed that I didn't recognize that I was high-fiving my family and friends leading up to the finish line, I still felt amazing inside because I had finished. Next possible stops on the marathon train: Ocala Marathon (Florida) and the Martian Marathon (Michigan), both places where we can visit people and race in the same weekend.

2. I am now ok with putting a 26.2 sticker on my car. I have laughed at those stickers for as long as I knew what they meant (which is just this year), but it took me four hours and three minutes to change my mind. You have earned the darn sticker, and you better put it on your car. They gave us some in our swag bag, and that bad boy is on my car right now.

3. Uhhhh, wait. Ummm, let me see. There were three things. Ummmm, uhhh, I know what one and two are but...ummm (Rick Perry joke for anyone who watched the Republican debate this week).

No really, #3 is that running without my family is a no-go. For a long time, it was the plan for me to go to the marathon by myself, while my family stayed in AL. The week of the race, we decided to all go together, and now I realize that the previous plan would not have worked. I saw them at mile 18 and 21.5. They saw me (when I didn't see them) at mile 23 (they were on a bridge looking down) and at the finish line. Just knowing that I could look forward to seeing them was so motivating. By mile 18, I was basically just living to see them. I can't remember a time I felt happier to see their sweet faces. In the challenging final miles, their support pushed each heavy footstep, and I realized that I don't want to race without them again.

Overall, I liked that the race took us through a lot of different parts of town. Some people were disappointed that we had to run through poorer areas of town. Give me a break, snobby runner people. In every neighborhood, people were out on the sidewalks cheering us on, which is especially helpful when you are running solo and trying to stay motivated. The most motivating crowds were at Savannah State University. I didn't like running the interstate because all I could hear was vomiting and the strained this-could-be-my-last-breath-before-I-pass-out breathing.

Staying with Savannah natives helped us miss out on a lot of the traffic problems others had, so I will definitely consider this race again next year. I also loved how easy it was to find my family after the race. The park at the end was a perfect setting to hang out with them and relax (and stretch!) before we were ready to grab a bite to eat.

Recovery went pretty well. I was very sore for two days, and the third day, I ran a couple of miles and eased back into regular activity. The only lingering issue is a toenail that will probably come off. I wore new CEP compression socks, and they had some fabric bunching at the toe. I didn't realize until near the end that the way it was rubbing my toe was hurting my toenail (so many other things were hurting worse). I probably could have prevented it by adjusting the socks, although I think that they are just sort of bulky on my foot no matter what. Note to self: don't try something for the first time on race day.
Posted by Unknown at 3:31 PM