Sometimes I like to do things backwards, like run a marathon before running a 5K. Thanks to an awesome group of healthy ladies, I ran my first 5K a couple of weeks ago. We just picked the race weekend that worked best for the most people who wanted to run and went with it. That put us running Shades of Vestavia on Nov. 19th. 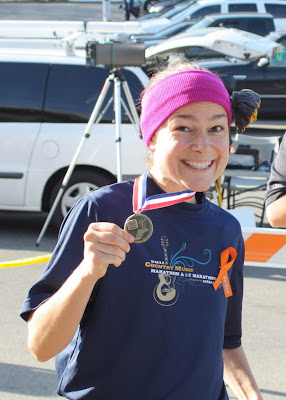 This race was to benefit the community by raising money to replace trees that had been ripped down in the tornadoes earlier this year. You would think there is no shortage of trees in Alabama, so why the heck do we need a fundraiser to buy more? That's what we thought. Then we drove to the race site, passing houses and trees that had been demolished in the storm, and after seeing the path of destruction, the idea made a lot more sense. The areas where the tornadoes came through left empty gaps in the skyline, and where green curtains of leafy trees used to stand, snapped trees now looked more like flimsy, broken toothpicks than 50-year-old oaks.

The race was sponsored by our local police department, which meant that we had awesome road support. For such a small race (maybe 60 participants?), I was surprised that we had chip timing, police at every turn blocking traffic from streets and even from coming out of parking lots onto the course, and race day registration (of which I took advantage) that still included a t-shirt. They also offered every participant a free tree to plant in their yard. Sorry, earth, but I declined. We are already raking our arms off with our existing trees. 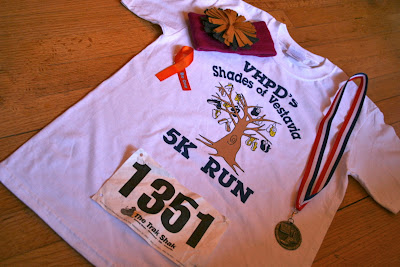 Some things they didn't have were post-run snacks. Boo! And they divided the ages groups into 15-24 and 25-40. Weirdly wide age ranges. There may have been another category, but I know about these two because I got third place in my age group with a time of 24:00:07. After already giving me my medal, the announcer called me up to ask me how old I was because he had accidentally given me the 15-24 medal. I didn't notice until then that the age group was engraved on the back of the medal. Thank you, Mr. Police Officer for mistaking my age range. Or maybe he also didn't notice the engravings on the back. Either way, that young filly now has the appropriate medal.

The highlight of the race was running with lots of awesome ladies (one who was four months pregnant!) who have enough panache to wear bright pink headbands with giant felt flowers attached. Nothing unifies a group like giant headbands. We also wore orange ribbons for our friend Janette who was recently diagnosed with leukemia. If you made it this far in the post, take a second to pray for her and her family. Seriously, do it! 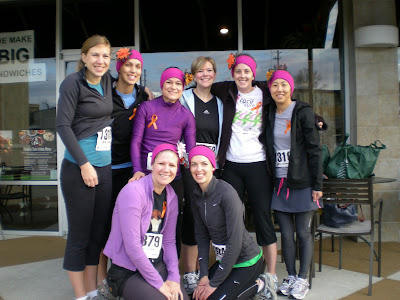 Most of us agreed that we want to tackle another race in the beginning of the new year. I say we commit now to even bigger headbands! If you can still see my face, it's not big enough.

Also, I committed to my next marathon today. The tiny Ocala Marathon on January 22nd, 2012. It's in Ocala, FL, where my mom lives, which is my main motivation to run it. We'll be able to visit our friends in FL and get in a great run on some rolling hills in horse country. Sounds perfect! I'm trying out the Hanson brothers training plan, which includes a ton more miles during the week than my previous plan but has shorter long runs. The maximum mileage before the race is 16, but it is supposed to set you up so that your legs are so fatigued from the running throughout the week that it's like you are running the last 16 miles of the marathon. I had to skip ahead in the plan because I only had ten weeks to train before the race, so we'll see what ten weeks (minus one sickly Thanksgiving week) of Hanson can accomplish.

Also, during the 11-11-11 Rock-n-Roll sale, I signed up for the Nashville marathon on April 28, 2012. So if the Hanson training doesn't work out, I have a few months to get something else started. Remember that time I said that I was only running one marathon, ever, and I mentioned several times that I hated running. Looks like I changed my mind.
Posted by Yo Momma Runs at 3:39 PM