Our local track club set up a really cool New Year's trail run. Reasons I had to run it: free run, free food, a new park that has not previously been open to the public, options from 3 to 10 miles, hopefully lots of local runners turning out. Another huge one is that I had already signed up to do a virtual Resolution Run with Run to the Finish. Perfect, my virtual and real worlds collide.

From the grapevine of runners on site, the turnout of a couple hundred runners was major for the Birmingham Track Club's annual Resolution Run. Maybe they finally caught on to the little secret that if you tell people there will be free food, they come running (oh man, the puns are flowing). My church figured that out a long time ago, the food not the puns. 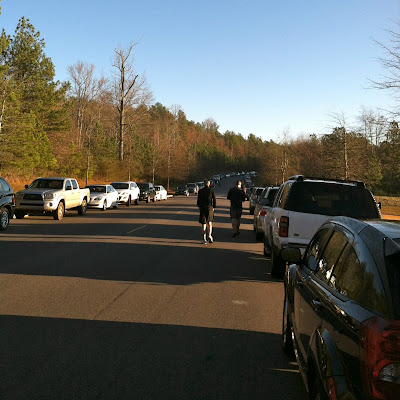 The view on the way up. Lots of cars!

Red Mountain Park, the site of the run, has a pretty cool history as a mining site. Lots of iron ore was found in this mountain and basically launched Birmingham from an empty field into a city. A few years ago, U.S. Steel sold 1,100 acres of the former mining grounds for the creation of the park. The mines haven't been active for almost fifty years, so there is guaranteed to be some cool stuff lurking in this 1,100 acres. Several boy scouts completed their eagle projects out on the trails, by demolishing old bridges and building new ones, and a lot of other volunteers helped to dig the trails. 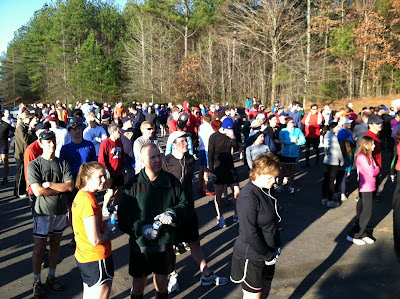 Runners waiting to get moving. We're pretty wimpy about slightly cool temps in the South. 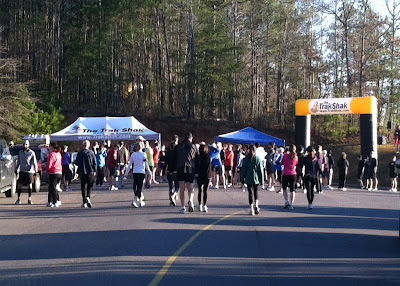 We opted for the 10-mile run, which was actually two 5-mile loops. The trails were very, very fresh in some spots, meaning lots of tripping opportunities on stray roots and sharp rocks for me. I thought I was home free at about 9.5 miles, but I managed to trip in the last half mile. I'm getting really good at rolling out of my trips since I've had so much practice lately, and I managed to pop up unhurt but slightly dirtier. My brother noted that the best way to pack your trails down is to get a couple of hundred people to run on them, so maybe we helped prevent some future falls.

Because there were so many runners on skinny, steep trails, I took zero pictures of the really cool parts of the trail, but I managed to eek out one shot of a steady incline that we faced on an actual gravel road of some sort. I can imagine that strip will be gorgeous in the summer when the trees are in full-leaf effect. 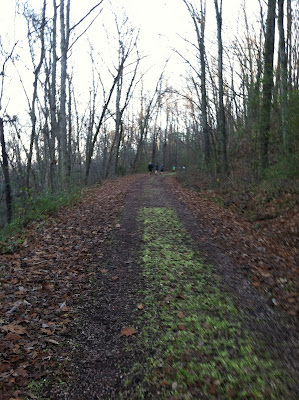 Pinky swear that this hill was steeper than it looks.

Let me say again that the trails were gorgeous! On our run, there were lots of twists and turns, and plenty of steep inclines and descents to make it interesting. It had rained a couple days before so a lot of the fresh trails were muddy, but over time as leaves build up on the trail that will probably be less of a problem. The mountain also lives up to its name with lots of red mud. Don't wear your fancy shoes and white shorts out to this joint. Black tights are perfect for camouflaging red mud splatters.

Another fun part was navigating the trails. The volunteers had clearly marked most turning points with arrows, but one trail ended with arrows pointing in both directions. How's that for equal opportunity running? Using our children-of-a-truck-driver sense of direction, we chose the left and made it to the right path.

Because we opted for the longest mileage option, the food was gone when we got back. Sadness. Jim N Nicks, a local barbecue joint, sponsored the eats, so maybe they weren't planning on such a large turnout. Who wants greasy, delicious breakfast biscuits after a long run anyway? Oh, right, me...and two hundred other people.

This was my long-run day, so I had 6 more miles to go. I went solo out to some flat terrain to avoid any more falling. It felt great to finish those 16 miles and bring in the new year year with a long run.

Thanks, Run to the Finish and Birmingham Track Club, for making those 16 miles feel a little more doable. One of my resolutions for the year is to make my running more social, like running with friends and volunteering in our local track club. So this run was a perfect start to a more social running year!
Posted by Unknown at 8:06 PM