Opened the day with a 5 mile track run which I didn't time. Just shaking everything loose.

The Mercedes Marathon Expo started at Boutwell Auditorium today and goes through Saturday. Because they have a 5K tomorrow, Friday is usually a busy expo day for them, so I waited until after the kids got out of school to head downtown. At one point I thought it would be a good idea to take all of my kids to let them experience the race vibe at the expo, but a genius friend suggested I just drop them off at her house to play. This turned out to be the best idea because my original plan involved a double stroller for the twins, and when I walked into the auditorium, thankfully sans kids, I was greeted with this giant set of stairs. Nothing says "not kid friendly" like a large staircase. 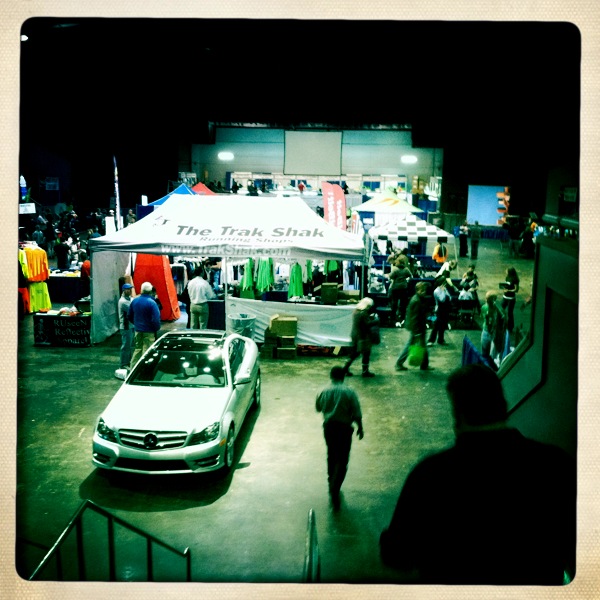 I guess they expect runners to be able to navigate stairs, which seems to generally be the case. Although I can run a marathon, but walking up my stairs with a laundry basket takes ten minutes of recovery for me. Seriously, that junk is not messing around.

Back to the expo, Trak Shak, a local running store, is obviously making a statement here. They were the hub of the expo, and various other vendors lined both walls as well. Trak Shak was selling tons of gear for half off and GUs for $1. Of course I found something to buy, even though officially I am on a spending freeze this week, but I justified it. The usual running clothes justification: it would cost a butt load of money if I bought this somewhere else. I bought another Nike Pacer skirt like the one I wore at the Ocala Marathon, so I knew how it would fit without trying it on. The colors were fun, and the god of running clothes must have been watching over me because when I came home I realized that it perfectly matches a shirt I already have. Race day outfit, done. Except this might mess up my whole wanting to dress like my brother thing. Unless he gets the same skirt. Once in high school we told him we would pay him five dollars to put on my dress. When he did it, we acted like we didn't know what he was talking about when he said he wanted his five dollars. For some reason, that is a stand-out hilarious moment of my life. So he probably won't listen to any of my outfit advice if it involves a skirt or dress.

Packet pickup was easy. They let me pick up my brother's packet too with no hassle. As you left the packet pickup, you crossed a mat that activated all of the chips you picked up. Not sure why they do this at the expo. Just to verify you got it? The bags had our shirts and a pair of gloves along with a million brochures for other races and a couple of samples. The shirts ran a little small or were just cut a little weird for me. I don't like shirts that cut in too much in the gut region, but otherwise I really liked the color (light blue, which is hard to tell in this picture) and art. If you look to the left on the shirt, you can see the silhouette of the Vulcan, god of fire and forge, which is our city's equivalent of the Statue of Liberty. It's a giant statue on a hill, which looks really cool all lit up at night, and bonus, he's naked in the back. Our kids think it is hilarious that the statue has an apron on that doesn't cover the bum region. But(t) I seriously love this statue, naked bum and all, so I was excited for it to be included in the shirt art.

I also snagged a few coupons for free kiddy snacks from the grocery, which I will most definitely redeem, and some type of supplement-y drink sample that I am afraid to try. They promised me that it would work great to drink it before my next marathon, but I couldn't understand half the words they said to me when they were explaining how it worked. Also, the drink tasted like battery acid meets NyQuil. It sounds good in theory, but...

Another bonus today -- my gym friend gave me a good luck bracelet for the race. It's to help me win, which would require more than a large miracle, but it's nice to know that the gym regulars are rooting us on too. 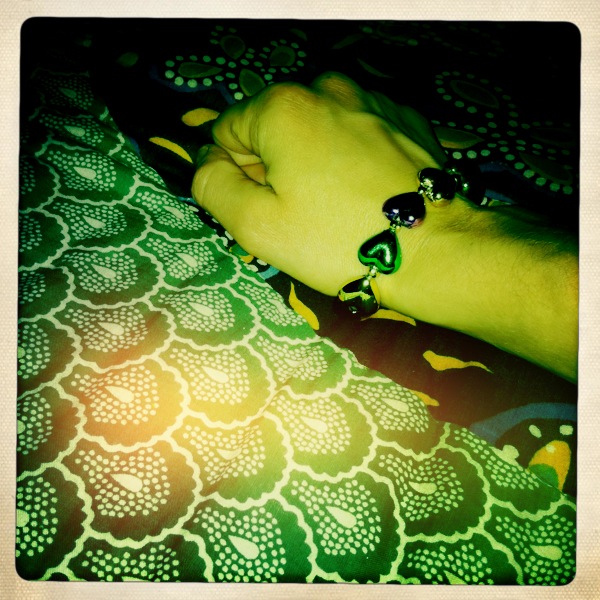 And in case you were wondering what the worst idea ever for a child's toy is, this is it. Let's teach our two year old how to bust out of ALL the locks in the house. We have enough escape artist-y behavior to worry about without the help of Melissa and Doug. 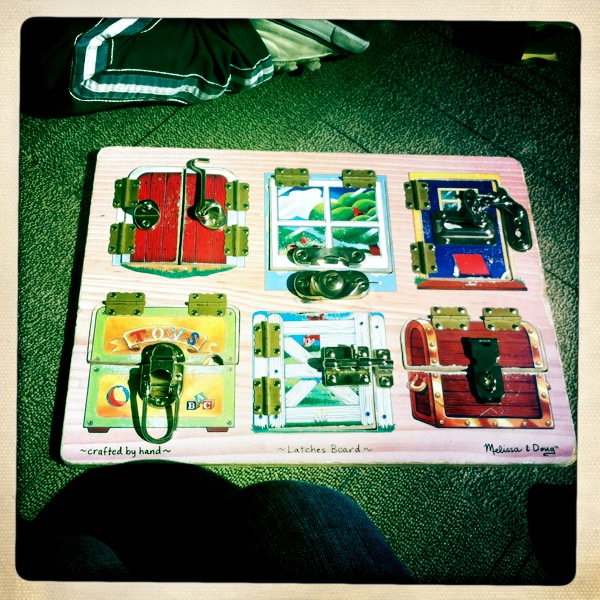