Today's run: 3 miles in 24:10 then 3 miles in 22:56. Both runs were back-to-back on the track. I split it into two times because I wanted to see if I could get a negative split. It worked! During my (two) marathons, I have yet to negative split, and I figure that if I want it to happen during the race, I better start practicing. Maybe it was the marathon two weeks ago or the almost week long break from running, but my legs are feeling better and stronger than they have in a while. I followed up the run with 50 minutes of walking the track and talking on the phone, my second favorite gym activity (the first is perfectly timing bathroom visits).

For the negative splits, I wore my fresh-from-the-box Karhus today without my usual Powerstep orthotics. The orthotics were very stinky from their residence in my previous pair of Karhus, so I decided to wash them before I violated the pristine new-shoe environment with them. Running without the orthotics felt like I was running barefoot. You know, I have arches the size of mickey d's -- that means high. I could feel my arches stretching and pulling the entire run, and I'm curious if they'll be sore tomorrow. I think I just officially became against barefoot running for myself.

In other news, my stash of Trader Joe chocolate has vanished like snow flurries on a hot skillet. Ever since my marathon, I've gone back to dessert eating. After the three week hiatus, the 80% dark chocolate that normally seems like clotted dirt in my mouth tastes like heaven. But with the pica and everything, maybe I'm just partial to dirt now. So after a week and a half of getting sugar hangovers every afternoon, I decided to be done. Again. Just until after February 19th. I can't have sugar bringing me down for marathon numero three. The downside: I can't blame poor performance on a sugar hangover. Maybe I should rethink this. It's always nice to have a silent scapegoat in your back pocket.


E, the oldest son, came home from school with a bag full of papers, and amongst the mass of glue and construction paper, I found this little gem. "in 2012 i want to do more Yoga." When we lived in Florida, they went to a charter school called Healthy Learning Academy, where they did yoga every morning before school and ate salad from the school garden. I miss that place. Looks like E is missing it too, or his tight hamstrings have been nagging him again. 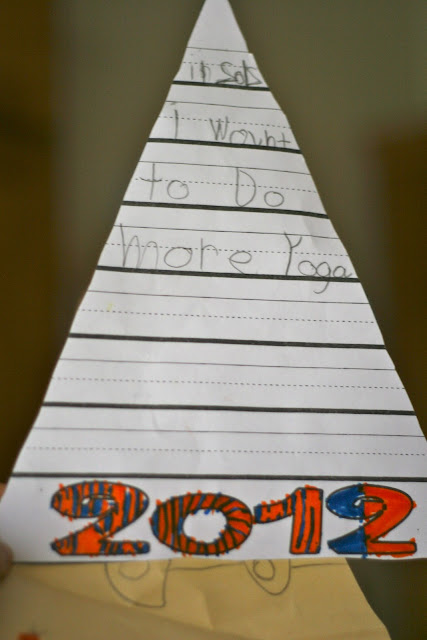 Do you wear orthotics?


Does your town have charter schools?
No, but Alabama is considering allowing charter schools. Please, Alabama. I mean, it can't get much worse, statistically speaking.