Here's my jam from the thrift store this week. 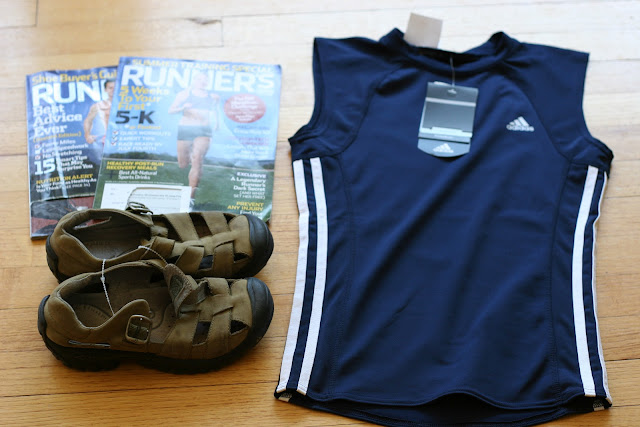 The shirt is technically a man's shirt, but the thrift store workers (and me) thought it looked lady enough for the lady section. Also, I just learned last week that navy blue is my color. Not from the years of color analysis that my mom, an aesthetician, forced on me as an uncaring preteen to teenager who always wanted to wear orange and yellow, especially when my mom said it looked perfectly hideous. I just happened randomly upon a navy blue shirt at the store, and when I tried it on, I appreciated all those bossy years of my mom telling me what colors look best on me. She was right. Navy blue does make me look less haggardly than orange. If only she were on the interwebs to hear me shout her praises. Mom, you are so right! Does it matter if shoes are not in your color realm?

I was not totally sold on the Keens because I imagined someone's sweaty feet in there in the 100-degree, 100%-humidity summers of the south. But then I decided that I'm cheap enough to not care about that, so I'll sanitize them and try them out. For under three bucks it was worth a little trial to see if I liked them for hiking around in the woods. Have you ever used them for trail running? Is that a bad idea? My Karhus are too delicate for the trails. They get beat up pretty fast if one twig touches them. My last pair started to disintegrate after one long weekend of trail running.

The husband is pretty good at finding sweet deals too, but he could care less about running. He's more into motorbiking. 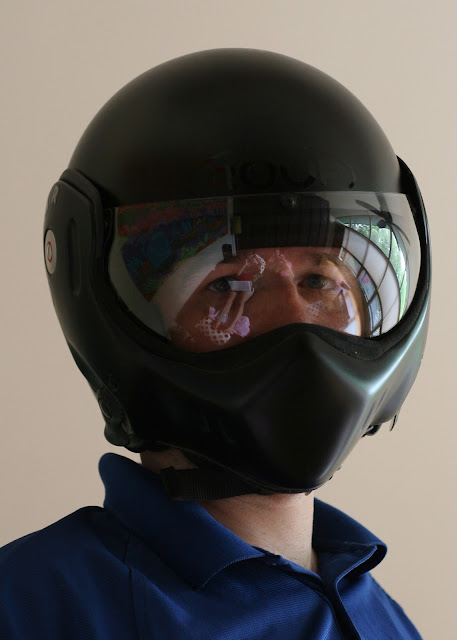 This is his sweet deal on a French helmet that he has had his eye on for five years. He's willing to hold out for the best deal. This one he scored on an ebay auction. Do people still use that site? If it were up to me, he would buy an entire suit made of the same material. So basically, he would be a giant robot with a tiny man inside.

If you look in the reflection of his face plate, you can spy me blogging and icing.

Have you scored any good deals lately?

Are you OK with motorbike riding? Too scary or not scary enough?

Do you know anyone with a sidecar? We have one in our garage right now! Like this one.