For this race, you park at the end and shuttle to the start. A bus pulled up right as we got there, so shuttling was no problem. We had plenty of time to mill around the gas station beside the start line. They had four packed port-o-potties in the gas station lot, and people were lined up at the McDonald's bathroom next door as well.


Finally we heard someone with a megaphone directing us to the start. This race wasn't chip timed, and there was only a tiny sign that noted the race start -- so the start was a little vague. Also, I couldn't hear a preview to the starting horn. One second I was standing there, and then I heard the horn and took off with the horde of people. Maybe the people in the front row had warning.

The start is on a steep downhill with an almost immediate left turn. The craziest start I've ever had because you come out blazing down that hill and have to navigate a sharp turn in the first five seconds.

I couldn't find an elevation chart for this race online, so here it is for you future S2S runners out there.

And here is what I accomplished. 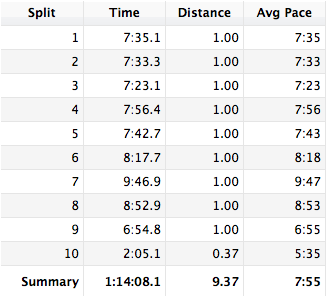 Miles 1-3 were as expected. During mile 4, I was reserving energy for the upcoming hill, but then it didn't come until mile 6. There was some walking in mile 7 to 8 because of the hills. My stride is so short that running just felt like wasting energy when I could power walk with a longer stride and possibly get up the hill faster. Though if I run it again next year, my goal will be to power through that hill, and I would go out and practice it before race day.

While the word we got from the race directors was that miles 5-7 were hilly with a 2-mile descent at the end, the hills started almost right at mile 6, and it was the last 1.5 miles that were downhill. It doesn't seem like that extra half mile of downhill they promised at the end would make a difference, but when it didn't come, I almost melted down Charlie Sheen style.

Here is a sample of what my thoughts were like for that half mile: "Keep moving legs, keep moving legs, where is the downhill, around this corner, no, I can't breathe, why am I still going uphill, why does that guy look like he's breathing when that is impossible because there is no air, can't breathe, is my garmin wrong, is that another hill, my legs are burning, do i have to pee, where the heck is that downhill, what's 9.3 minus 2, something with a 6 or 7, if I see another hill I will crap my pants, another hill, I hate you, I hate everyone, how am I still alive because I still can't breathe."

At the finish line, I forgot about ripping my tag off of my bib for timing. It's been a while since I've had to do that in a race. Even the tiniest 5K I did last year had chip timing. I think I caused the volunteers stress because I didn't know what I was doing with the bib. Sorry, guys.

After the finish, you had to walk a little piece over to get water. They set up tents in front of the animal shelter, and they had some animals out. Of course, my daughter soon confessed that all she had ever wanted for her birthday was a dog. Along with the animals, they had hot dogs, chips, cookies, drinks, and a trash can of beer. I didn't realize what it was at first, and I was thinking that it was the longest line for a trash can that I had ever seen.

The best part was the bounce house. Perfect for my kids to just jump forever while we waited for results. I was hoping for top three in my age group, but I was really shocked that I got first place. To celebrate, I stayed until the awards ceremony where they gave us our awards (ribbons) in tidy little envelopes. When I first got the envelope, I was thinking gift card! No gift card, but the medal was pretty cool. 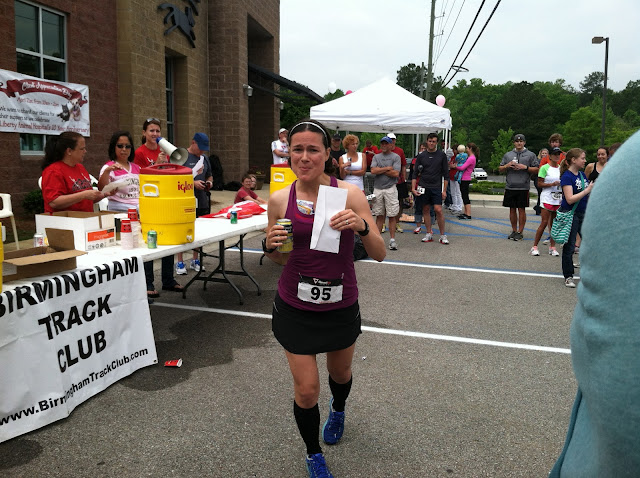 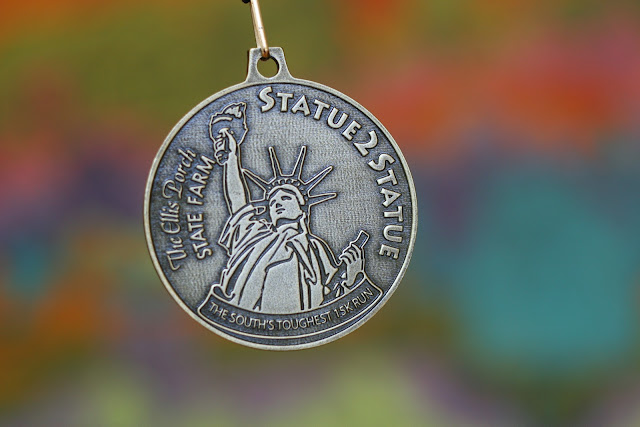 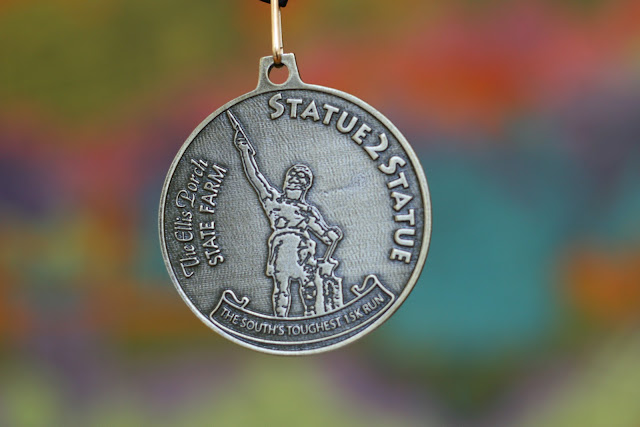 You can see on the medal that they've dubbed this the South's toughest 15K. We were joking that it was the only 15K, but afterwards, I feel like I could agree with their assessment. Even if there are others, could they possibly be as hard as this one?

If you've ever run this race, you know what I'm talking about when I say my feet are still recovering from the downhill. I guess some people get sore quads running downhill. Not me. My feet take the beating from the jamming of my foot into the front of my shoe. I've worn compression socks every day since the race, and they are stills sore. Hopefully they recover before the big race on Saturday, and hopefully the hilliness of Statue to Statue was a good training run for Nashville

We needed one picture actually near a statue since even though the race is statue to statue, you don't actually see them on any part of the course.

Here's one last shot of the race goods. I'm pretty sure this shirt design has been around for several years. We saw lots of runners from previous years who had basically the same shirt only a different color and a different date. If I were redesigning it, I would make the statues more prominent (like on the medals), and I would add lady sizes. These run large, ladies, so order a size down. 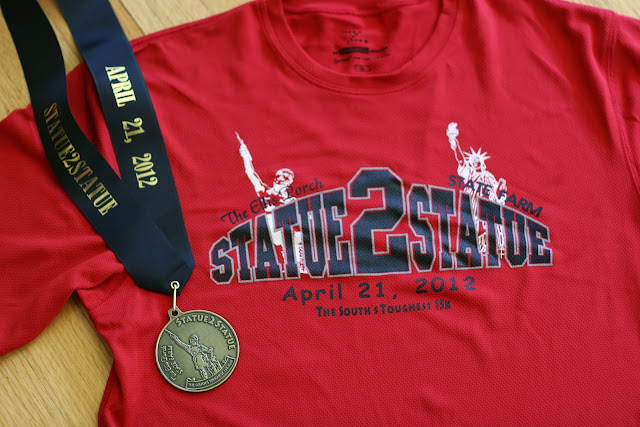 Yes, I would definitely do this race again because of tough the course, the friendly volunteers, and the community feel. It's also not too expensive, only $25 with early registration. The best part is getting to mill around with a smallish group of local runners after the race. Also, I am determined to conquer those uphill climbs next year.
Posted by Unknown at 1:38 PM