Scoping out age-group competition. Do you?

This weekend was like run heaven for me, and there's so darn much to write about that I can't squeeze it all into one post. If you are like me, you probably have about .2 seconds to read this post in between wiping poop off the floor and putting someone in time out, so I'm gonna split the goodness up. Plus I only have .2 seconds to actually write it in between the excrement cleaning and such. Did I mention we are potty training twins? Lots of feces on the brain. You're welcome.

First, I have to catch you up on how training went at the end of the week.

Friday: I ran 10 miles on the gym track in 1:17:14. I was really excited about trying to run faster and faster miles 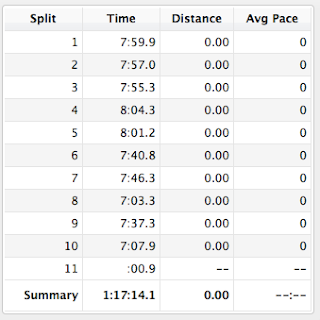 These are the splits. I have to count my own laps and press the lap button after each mile (nine laps), and I may have messed up on mile 8 because it seems out-of-place fast. My average heart rate was 156, and the highest was 173 with my sprint to the end. I need to figure out my maximum heart rate, but just from monitoring my rates with no scale to judge them against, if I hit 160s with my heart rate, I'm starting to work pretty hard. If I'm in the 170s, I'm hauling, for me. You know how speed is all relative.

Saturday: my main goal was to get in a trail run. Preferably a 10 miler, but I wasn't sure where we were going and what the trails would be like. We picked Red Mountain Park because it's newly opened, and we were slightly familiar with it from the Birmingham Track Club's Resolution Run. We got about 7.5 miles done in the park, and I ran down the street to try and get an even 8. My brother said he'd drive down to meet me at the end of the street, which made 8.12. I was tempted to have him drive .88 more to even it out again, but that made me feel kind of like a creepy running type A-er. Instead, I tried deep breaths and letting that uneven training number evaporate with each exhale. I almost had to bust out a shavasana right there in the street.


The pace was super easy at Red Mountain. My watch said we took 1:35 to finish the mileage. My brother's Runmeter app that auto-detects stops and pauses for you said 1:06, which means we stopped a lot to look at signs and take pictures and recover from falling on the flattest parts of the trail (that would be me).

So my two highest mileage days would obviously lead to a half marathon the next day, right? No rest for the crazy.

Monday: my workout was putting on super tight compression shorts and sucking in all day. And a BodyFlow class. And an unknown amount of walking on the track, until I got called down to the kids' club for an incident. You guessed it. It involves poop ... and walls. The sweet gym ladies told me that he was trying to wipe with a postage stamp of toilet paper. 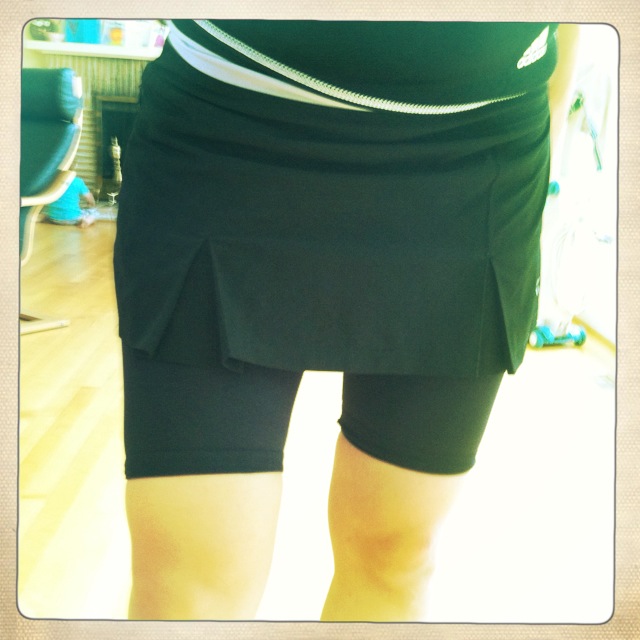 But enough about training numbers and really tight shorts (and hopefully poop). This weekend at the trail run something interesting happened to me that I'd never had happen before this race. I was coming in on the home stretch, and a girl beside me asked how old I was. When she found out I was in a different age group, we both laughed when she said jokingly that I could go ahead. Another friend at the race said something similar happened to her that day as well. Again, kind of interesting.

So usually in a huge race, like any Rock n' Roll race, I never pay attention to how old people are around me. Plus, with the different start times/waves, you could bust your butt racing someone to the finish who started twenty minutes ahead of you. So really, it makes no difference. In smaller races, I tend to wonder slightly more about age groups of people because there is always a higher chance of winning an award, but I'm not sure if I would ever ask someone during a race how old they were to see if I should try and haul it to pass them. Would you? Have you? Would you ask straight up or would you try to slyly get the info out of them? Like by asking what year they graduated from high school to see if you have any mutual friends (wink, wink). Or by asking them what their favorite cartoons were when they were kids. If they say Gummi Bears, the race is on like Donkey Kong.

Just wondering how competitive this blog audience is during a race.

Have you ever been asked how old you are (by someone trying to figure out if you're in the same age group) while racing?
Posted by Unknown at 11:52 PM