Trail racing on the fly and last day to enter giveaway

This weekend I pulled off some new stuff.

Like running a race that I only mentally confirmed I was doing ten minutes before I left my house. It was an option in my mind for about two days before that. Thanks, Neon Blonde Runner, for the inspiration to race on the fly.

This doesn't mean that I'm fully converted to last-minute racing, but let me tell you why I loved it.

1. SLEEP! I come from a family of self-confessed night owls. When we get together for our yearly reunions, it is a sign of weakness to be the first one to go to sleep. Not officially or anything, but I never want to be the first one to go to bed because if I hear a cool story about what happened after I went to bed, I will completely regret those extra couple of snoozing hours. Unfortunately, most of the time it's just a lot of jokes that don't make sense because we are tired and not on our top joking game. After we call it quits around 4 a.m., we see each other at lunch the next day. We may or may not have been sleeping that entire time. We've all got kids and jobs and such that prevent us from doing this (in its extreme form) in our everyday lives, so I think staying up insanely late is our gift to ourselves at reunion time. And the in-laws are amazingly supportive of this crazy habit. After the first couple of years when my husband thought it was ludicrous, he got into the routine. Take the kids to bed, go to sleep, and let Yo Momma sleep in. Simple and effective. The whole point of this is that on top of being a late-to-bedder anyway, I can't sleep on race nights because I'm so darn nervous. This weekend I learned that if I'm not for sure if I'm doing a race, I sleep fine and somehow manage more sleep than most other nights. Sold.

2. Less pressure. Please tell me that I'm not the only runner out there that puts too much performance pressure on themselves because, heck, I just spent four months training for this darn thing. Plus I took extra time to carefully taper and hydrate and eat less crappily than normal. I spent months putting tiny slash marks on a paper training calendar and writing miniature split times in the margins. Plus all of the info I input into RunKeeper and upload from my Garmin. How do I track thee, training? Let me count the ways. So I am annoyed and whiny when things don't end up how I imagined or hoped. No real training, no pressure. Especially if you go ahead and run whatever you want the week, and day, before the race. If I suck it up, at least I didn't sacrifice anything in the makings of a crudster outcome.

Yes, you need to have maintained some kind of fitness to be able to pick up a last-minute race, but I'm starting to like the idea of always being ready in case a half marathon pops up. Marathon -- now that's another story.

This weekend's on-the-fly race was the Xterra Oak Mountain 19K (21K). Their site says 19K, and our bibs said 21K. Not sure which it actually was. My first trail race, and once again, I loved getting out and meeting people from my hometown running community. That's why it's so hard to pass up these local races.

And I had my first stand on a legit podium. 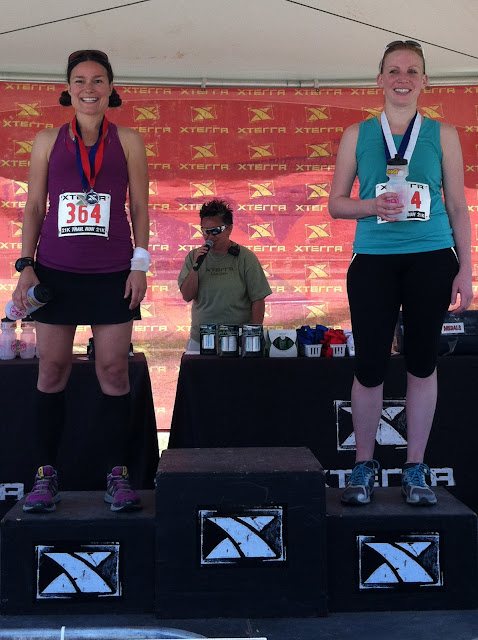 First place was Lesley Paterson who won the 2012 ITU Cross Triathlon World Championship the day before this race, NBD. She flew out right after the race (so the MC said), and she wasn't there for the awards. The podium looks slightly sad without the top filled out. Look how close the next few slots are. I barely scraped by a second place (age group) in that tighty tight race. Basically, we were all in a train on the narrow trail, and the final numbers came down to the sprint to the finish. Good work, ladies!

Last day to enter to win some awesome socks from Proud Runner! Go here to enter.
Posted by Unknown at 5:33 PM