This is how yesterday started out. 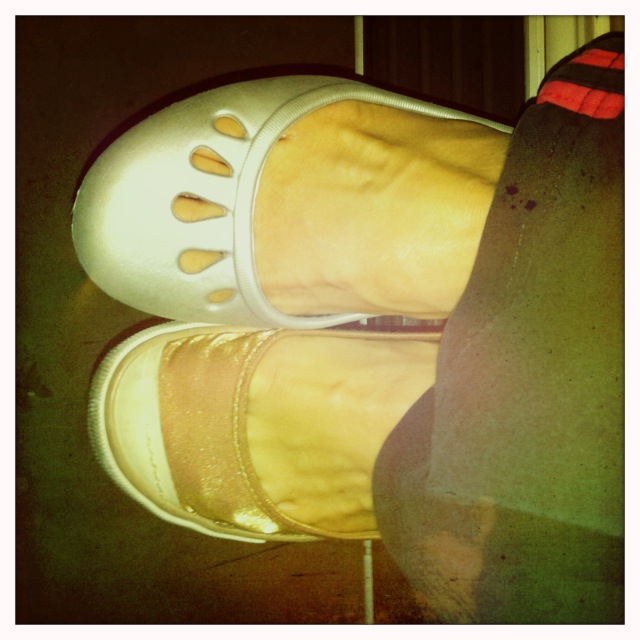 Later I decided to organize the shoe pile. I used to have tons and tons of shoes, and when we moved a year and a half ago, I purged a lot of shoes that I had been holding onto since high school. That was 15 years ago for me, so it was time. I've been able to maintain a relatively small (meaning holy-crap huge for normal people, small for someone who should be on hoarders) shoe collection until this running business. I have a problem with letting go of old running shoes because I didn't even wear them for six months before it was time (in running shoe miles) to put them down. For me that means 500 miles are on them, but I usually sneak in a bit more. Then I convince myself that I might need those shoes for mowing the lawn or walking down the street. I may not want to run in those shoes, but I can walk everywhere in them. And those ones were cute, and these ones were the most comfortable. And I can chew gum and jump in this pair. And what if I need to balance on one foot while reading an almanac. What if the other shoes won't work for that? And the list goes on of excuses for why I need to keep every old pair of shoes.

How do you convince yourself to get rid of old running shoes? I need your e-help on this one.

Wednesday, I was all rock and roll and going to bust out 10 miles because there is a chance that I won't get a long run in tomorrow. It was a hot mess, meaning that I felt horrible the entire time. I finished in 1:24 (avg. pace 8:28). Afterwards I should have asked to borrow a mop from the custodian because the amount of sweat on the floor beside my treadmill was unreal. Small children could have bathed in it. A couple gym friends came to talk to me while I was running, and I'm surprised the flying sweat did not deter them. But they helped make a couple miles disappear without my notice, so I'll take it.

After the run, I was just feeling weird and shivery and thought that maybe I should have been drinking Gatorade instead of just water to keep my electrolytes in check. Then my daughter's teacher called and said she had just vomited on the school field trip. I never vomited, but I felt awful for about five hours. Was it dehydration? Was it a virus? Whatever it was, we were all just lying around feeling like someone dropped a sick bomb on us.

Thursday, I felt better but decided to just do a BodyFlow class and walk around the track to rest. During this track time I had time to contemplate a hip soreness I've been having for a while now. Last month I had a myofascial massage from this guy. If you live near Birmingham, it is worth a trip to see him. My neck had been popping for weeks if I leaned it to the right or left. After this visit, no more popping.

He also told me that I was tight up the entire left side of my body and asked if anything was happening on that side. That was the leg that I suspected had the start of a stress fracture. At that time, it was still pretty painful. Then at the very end of the appointment, he told me that my left leg was also shorter than my right, and that it may be because of the muscle tension on that side. He told me to come back so that he could hopefully fix that. Of course, I skimped and didn't. But ever since then I have been noticing a slightly progressing soreness in my hip. It was so small at first that I though nothing of it, but this week, it had gotten so bad after runs that it was hard to stand up from sitting. It didn't hurt during runs, just if I had been resting and tried to use it again.

I read up on all sorts of hip issues, and I had all but convinced myself I might have to have hip replacement surgery until I read Running with Spatulas' post about upslips. It was like the gates of heavenly (or runnerly) wisdom opened up, and I knew that was what was happening with my hip. Thanks, Running with Spatulas!

An Upslip of half of the pelvis is an extremely common injury for athletes.  It involves half of the pelvis (usually the left side) moving upward relative to the opposing side.  This has a ripple effect on the rest of the lower body.  It can change leg length, place a stretch on specific muscles, and provide an altered neurological feedback loop.  All of this will impact you or your athlete's ability to run, jump, land, compete, and stay injury free. Source

Running with Spatulas tells you all about what to avoid (most importantly any dance moves from the 80's or 90's) to prevent upslips.

So I did what any person in pain would do, I asked my husband to pull my leg. Don't try this at home. Definitely get a professional to check out your leg. But when I woke up this morning, for the first time in several days, I felt no pain and had no need to limp when I stood up. Just a slight soreness in that area.

This morning I did five easy track miles and average an 8:03 pace. I really focused on keeping it to a pace that felt easy because I want to have legs that are ready to fire for the Girls on the Run 5K tomorrow. I'm volunteering and racing! Double combo big money no whammy awesome. Can't wait.

I will be wearing these to pump up jam. 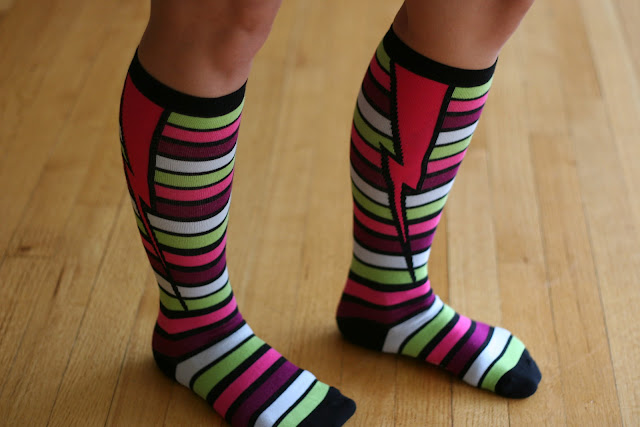 Are you racing this weekend?


Every had a myofascial massage?
Posted by Yo Momma Runs at 11:34 PM