Since I've waited almost a full week to write about this race, some of the little details, like whether I tripped 17 or 217 times, may have faded, but I know for sure that I loved my first trail race, XTERRA Oak Mountain 21K.

One of the stand-out parts of the race was the camaraderie between the racers. Every single time I tripped (yup, it was more than several), all people within seeing distance asked if I was OK or encouraged me when I got back to solid footing. People talked, laughed and joked the whole run. I even found a buddy at the start line who stuck with me the whole race. He helped me at lots of points by talking and getting my mind off the race, and I might have even helped him at some point. I've just never experienced anything like all of that during a road race. Part of that may be because I normally wear headphones for at least part of my road races. I go headphone-free when I run with my brother, but otherwise I have them on after about mile 6 of a longer race or from the start of a short race. When I have music with me, I know it's my backup motivation, so I don't work as hard to make race friends.

Being a local race, I left my house after the sun came up. Now that puts a check mark in the This Race Rocks column.

Because this was a spontaneous race decision, I drove to the Oak Mountain State Park hoping that they would have spots left. I don't know that they even limit race entry, but not being sure had me a smidge worried. They had a little outdoor expo set up right by the start line. I actually didn't look around at the booths at all because I beelined for the registration booth. There was a waiting line for registration with about twenty minutes before the deadline for entry, so it looks like I wasn't the only one with the last-minute racing idea. After I registered, I tried to eat and drink some and of course visit the utilities just shy of a million times. They had port-o-potties and park restrooms to use, so there was never a very long line when I went. 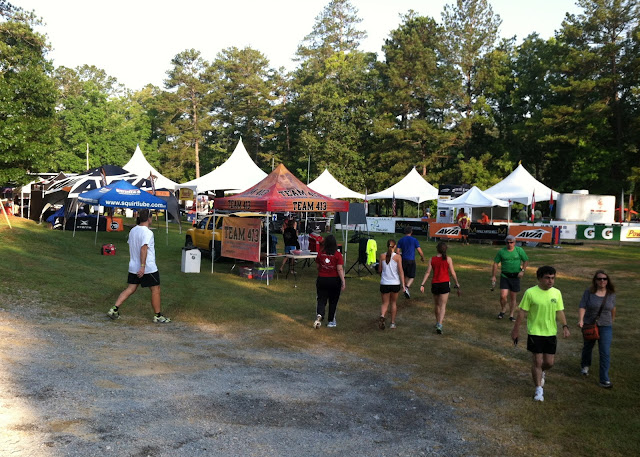 In the expo area, they made announcements and had some prayer meetings before the marathon and the half marathon (and maybe for the 10Kers and 5Kers, but they started after us). This is also the area where they announced that you aren't allowed to wear headphones. That made the decision of whether or not to wear them easier, but I still saw several sets of them out on the course.

During my bathroom trips, I got to check out some of the park scenery. Oak Mountain State Park has a $3/person entry fee, but look at some of the coolness you'll get for the monetary equivalent of a corn dog at the flea market. The beach isn't the most exciting (and I have a HUGE fear of water moccasins and floating poop, both things I saw in lake water as a child), but holy green trees. From a distance, Alabama tree and hill combos look like giant bunches of broccoli. Take a bit outta that. 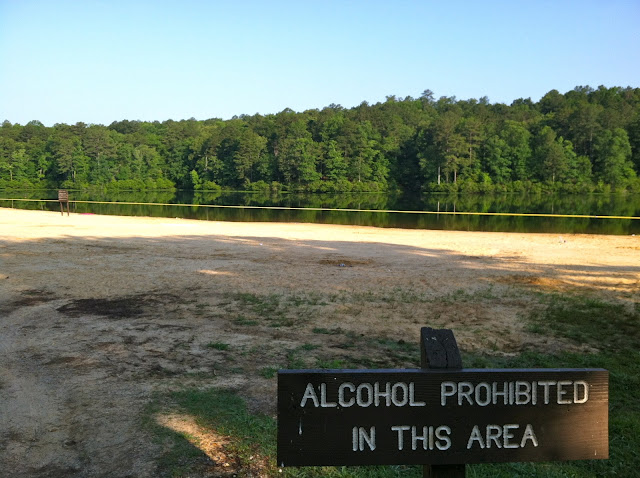 The start line was two steps away from the expo. I like the obvious, blow-up arch start lines because I tend to lose my ability to think when I'm nervous. Because I was milling around somewhat aimlessly before our 8:30 a.m. start, I got to witness the 8 a.m. marathon start. I did not envy the distance that morning. Normally I would, but I was already feeling toasty. 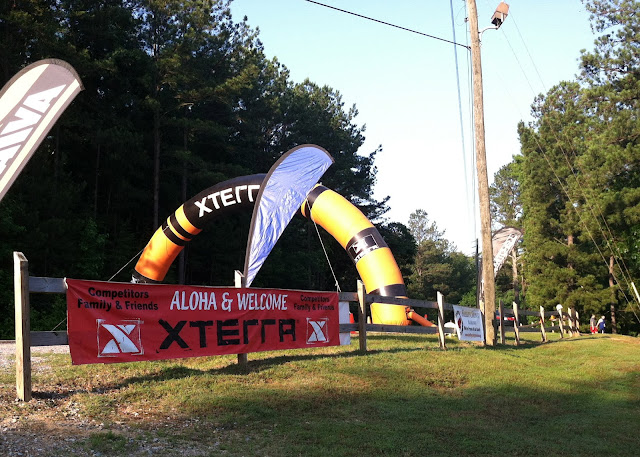 The leader in Trak Shak neon was the eventual 42K (marathon) winner with a 3:06. 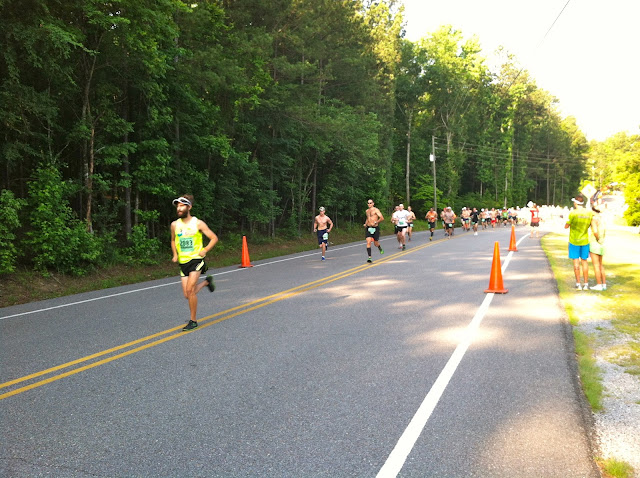 Earlier start times would have been nice to keep the heat at bay as long as possible. We lined up shortly after the marathon start, and while we were standing there talking, a gun went off. Those sudden starts are scary. I seriously need a national anthem to warn me that a gun is about to fire.

I attempted to take a couple of pictures, but see below to verify that trail racing and picture taking simultaneously is not my talent. Yet. The first picture is still on the street, so I really don't have an excuse there. 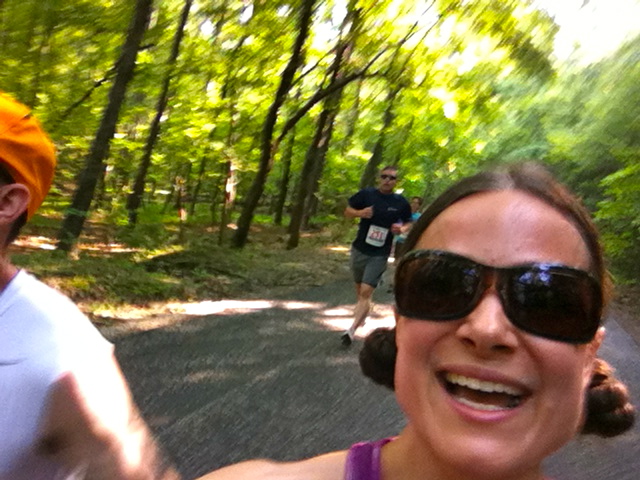 And while taking the one below, I had my first trip so that put an end to worrying about getting a picture for the blog. 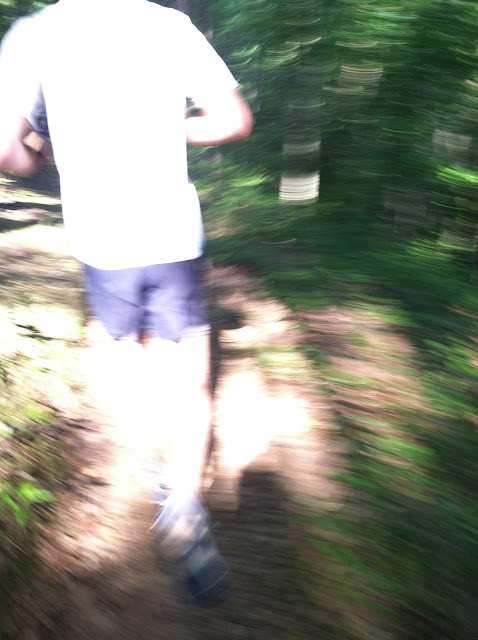 The course terrain wasn't too difficult. The paved road before we even got to the trails felt like it had the biggest hill. I kept reserving energy for hills later in the race, but they never came up. There were some small inclines but nothing serious.

Some people got lost at the first turn onto the trails because it forked and wasn't clearly marked. As we finished, the XTERRA folks were announcing that they would give free entries to people who went the wrong way on the course. I was running behind people who went the right way, which was left, so I followed them down the correct trail. I would easily have been lost too.

Luckily, I met a local runner friend before the race who advised me about passing etiquette while trail racing. He told me to not be afraid to pass, but I wish I could say that I followed his advice more closely. I'm completely happy with how the race turned out, but there were definitely times when I felt too nervous to pass. The trail was too narrow, or I didn't feel confident that if I passed I would be fast enough out in front of the person I passed. Somewhere around the halfway point, we hit a paved road for a section, and I tried to bust through that part as fast as I could. I figured if I could scoot past some people here, that would be less passing I would have to do on the trails that made me nervous. Did I mention that I tripped a lot?

The second half of the race included the Family Trail, if you're familiar with Oak Mountain. Lots of winding singletrack paths. Unfortunately, once we hit that section of trails, we didn't get any more aid stations, and even though the path was nice and shaded, we were all feeling the burden of running with no fluids in the heat. For fueling, I had a gel about 55 minutes into the race and drank some Gatorade from the stations when we had them. My last big fall about a mile from the finish was caused by my trying to eat a Power Bar gel while running and gagging (I'll call it ragging). I officially hate Power Bar gels. The same ragging happened to me during the IMS Arizona Marathon with those same gels. I thought it was the flavor, but it wasn't. It was definitely that craptastic gel. I dropped the gel packet when I fell and didn't pick it up. That felt really wrong, but I had to keep moving to avoid a domino effect of the people behind me.

I only had a vague idea of how far we had been (because I wasn't sure how well the Garmin was working), and I didn't want to bolt until I knew I could sustain some type of speed until the finish. I was third in a train that kept growing and growing along the trail. Eventually a few girls started to pass, and when I saw that the street was coming up, I decided it was time to put my game face on and kick. Nothing amazing happened, but it was a closer finish for my age group than I thought at the time. 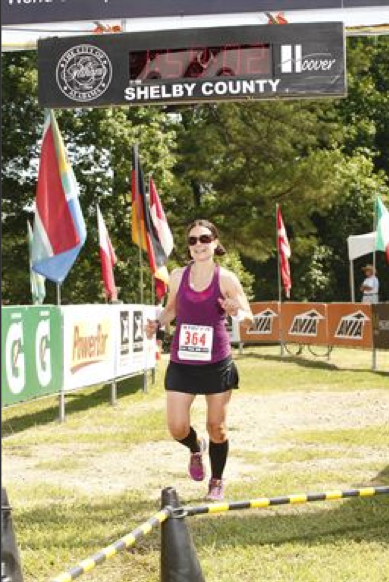 Out of 20 girls in my age group, five of us finished within 45 seconds of each other. This amazing girl finished 25 minutes before me, so at least I don't look back and think, "If only I had gone a little harder I could have had first place." That was just not gonna happen. I do feel like in general I could have worked a bit harder, but with it being my first trail race, I just didn't want to do anything too crazy and regret it two-thirds of the way through the run.

Here are the final stats. I liked that they gave out these little cards so you don't have to all crowd around a sheet of paper taped to the wall. 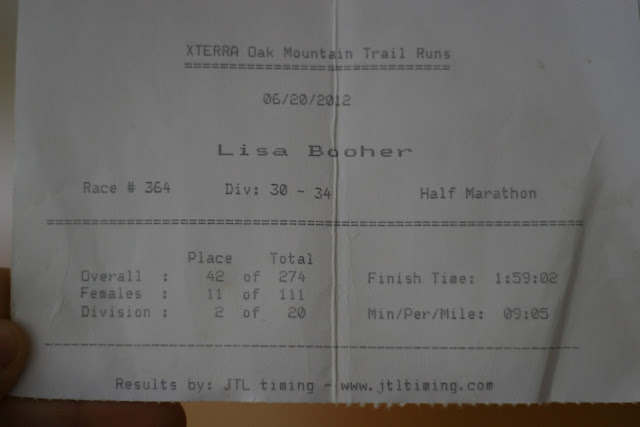 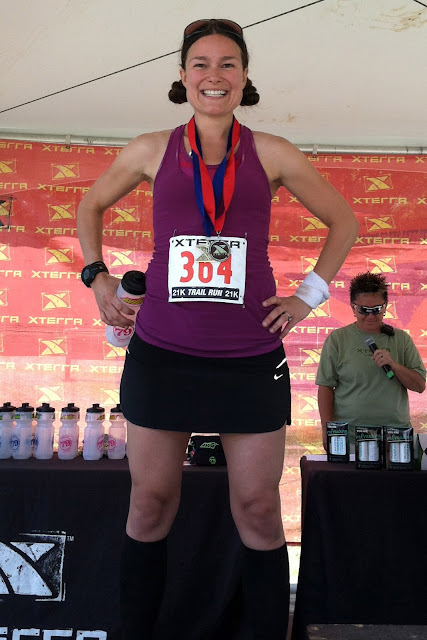 Here's the bling for winning age-group second place. The water bottle kind of made me laugh. First place got a ticket to a race in Hawaii. Second and third place got a water bottle. Same, same. 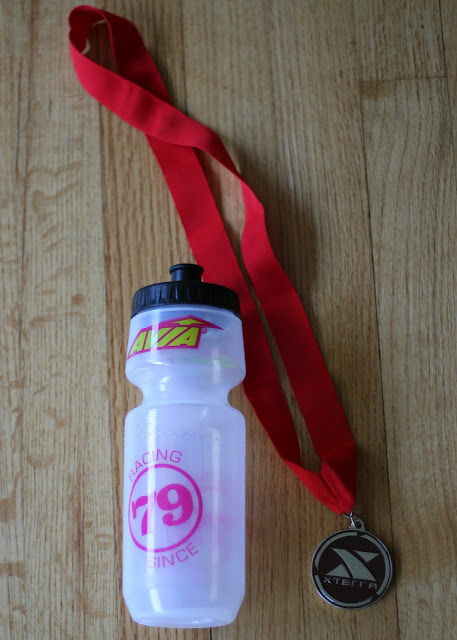 This is the general finisher/racer bling. I was hoping for girl-sized shirts. Insert frowny face. 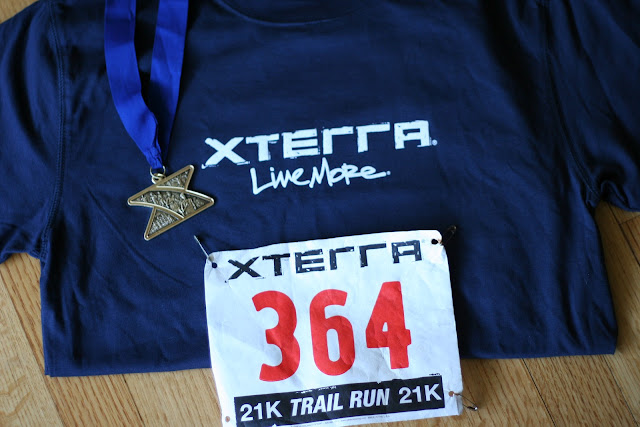 Here's a reminder of how twisty turny this race was. All but one of my safety pins were wedged so tight into the pin, that I couldn't force them out, and there's some dirt in there from when I bit it. 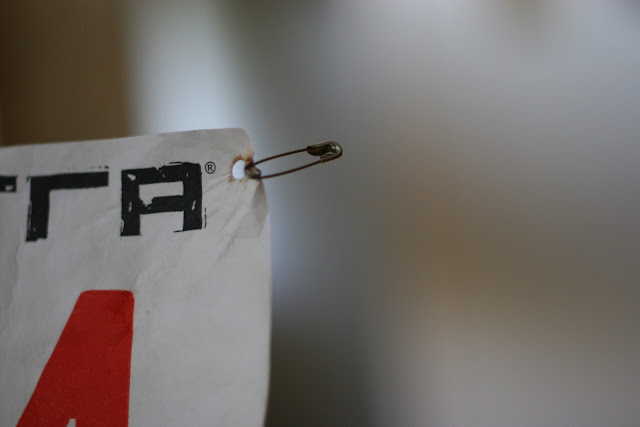 After the finish, there was plenty of food, of which I didn't eat a single bite. Eating sounded repulsive, but I drank a ton while I talked to the friendly trail racing people.

The great:
The bad:

With all of those cards on the table, I would still definitely run this one again. Done and done.