Going commando and race spectating (but not together)

Wow, I take two days off from blogging, and I'm already totally overwhelmed with how much I want to tell you, people of the interwebs.

1. My end-of-the-week workouts were pretty good. On Thursday, I ran four miles in 31:50, and afterwards I went for a free personal training session at the gym. The trainer scolded me a little bit for working out before my session. I thought it would be an awesome warm-up, but apparently that is not what he had in mind.

The previous night was pretty rough. I had gotten some really bad news about someone precious to me in our family, so I just really needed to run out my sadness. It worked only a little.

Back to the training session -- it was a killer. How many days later is this? Three and a half days later and I can still feel soreness with every move I make. Even when I raise my eyebrows in surprise. We used the TRX straps for most of the exercises. Holy crap and turds, that sucked.


I wish mine would have been hanging from a tree so that at least there would have been some joy, like seeing a river flow, as I contemplated never working out again because I might not ever recover from this workout. I asked the trainer if he made people do these exercises to prove to them how weak they are. He laughed, but in his possibly ice cold trainer heart, he knew it was true. You thought you were fit? Let me show you just how weak you are. It's a pretty good sales tactic.

Friday was an accidental rest day. I planned to go to the gym for an afternoon class, but I forgot that the kids' club closes at 1 on Fridays. Well, bite my biscuit, who would have guessed that I would yet again be annoyed by my gym? We even changed from our pajamas and drove the two miles over there, just to walk in and be told it was closed. Since my husband was out of town, that meant no workout for me.

Saturday was a make-up day. We went to the early yoga class, then I hopped on the treadmill for 9 miles in 1:11. I even threw in a .5 incline in there somewhere. Hardcore incline, I know. Then I topped it off with an hour-long yard mowing session. I am totally counting this because 1) our yard is a hill 2) we have a push mover 3) the push mower is not self propelled 4) sometimes I physically cannot push it up certain spots of the yard and have to take an alternate route instead. So it's a workout.

What other everyday chores do you count as workouts? Or is that a copout (instead of a workout -- I'm killing myself right now with the hilariousness)?

2. Bouffe e bambini is giving away some Swiftwick socks (remember, these are the socks I would marry if I didn't already have a cool dude). So you should definitely go check that out. Plus she is a mega inspiration with sticking to cross-training when she has a running injury. Check out the giveaway here.

3. I was looking into running the Go Commando Half again this year. It's a great little race in Clarksville, TN, where some of our friends live, and my brother would run it with me again. Score! Plus it's still my half PR, and maybe I have a chance of beating that this year if I don't already secure that at Lady Speed Stick Half (have you entered that giveaway yet?).

My only warning about this race is that the military people running it will kick your butt. For a small race, there is some stiff competition. On the upside, there may be people wearing kilts and gas masks, also not things you often see in a small hometown race.

So back to the main point, which is when I went to visit the race home page, I thought, hey, that guy in the picture looks like my brother. And, wait, that looks like me. And it was us! So now, as the unofficial web spokesperson for Go Commando, I pretty much have to run it. 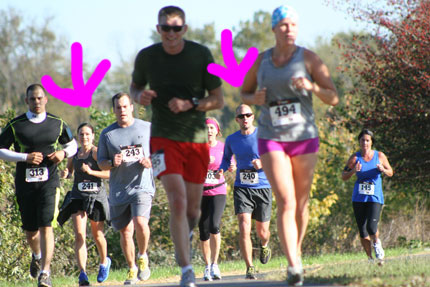 My brother is like my best friend, even though it looks like we don't know each other in this picture. Also, what the heck is my left foot doing there? I think that's a remnant of my soccer days and always running toes in. Kind of like this guy.


Why does David Beckham look 100 years old and like a wizard in this picture? Maybe he cast a love spell on the universe, which is why everyone and their mom loves his face.

4. One of the highlights of my weekend was coming home from the gym and realizing that there was a race in my neighborhood. What the?!! So I sped down the hill, threw the kids out of the car, and made them hike back up the hill with me so that we could cheer on racers. We were really slow walking up the hill with two wandering three year olds (looking back we should have just parked on the side of the road at the top), so by the time we made it, I was worried that all the runners would be finished. But just as we got to the top, a runner was getting some water and walk jogging down the hill. We clapped for her, and then she asked us which way to go from here. We had zero information for her, sadly, but then she told us it was her first race ever. So we (meaning I, because my kids were not nearly as into it as me) cheered even louder. As she ran by, the back of her shirt read, "You can make a change." It was so cool to be there for someone running their very first race and seeing them make a change.

Next, we saw a group of about seven people, young and old, walking. With them was a boy holding a stick that the woman in front of him held for him as a lead. Maybe he had muscular dystrophy because this race was the Steel Strides 5K, which raises money for the Muscular Dystrophy Association. I loved seeing a family, of all ages and abilities, come out and support each other.

And that was it. We only got to cheer twice, but it made my runner day. Every time I thought about that sweet girl running her first 5K and that family walking together, I wanted to cry. This is why I love races so much, they bring unlikely people together and help us prove to ourselves what is possible. They may have not been inspired at all by our cheering from the sidewalk, but I was definitely inspired by the guts and camaraderie I saw at the end of that race.

It also retaught me that it isn't just the people crossing the finish line first who are most inspirational. Every time you step out there on a course, you are teaching someone with your example.

Have you race spectated lately?


Who is your biggest running inspiration?
Posted by Unknown at 6:00 AM