Warning: any race with Navy in the title may require you to do pull-ups. The Navy Recruiting 5K/10K Challenge sure did have a pull-up bar to test your strength before the race (and maybe after, if you weren't vomiting on a grassy knoll), and they were giving out sunglasses to people who could do (or attempted) two pull-ups. Sunny day plus forgotten sunglasses equals my two racing friends doing pull-ups. 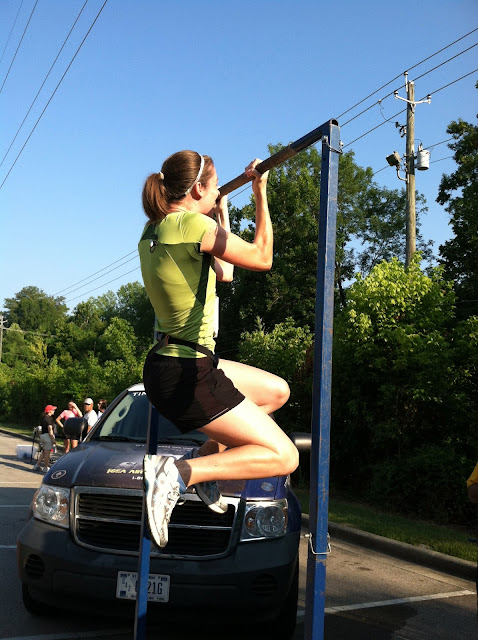 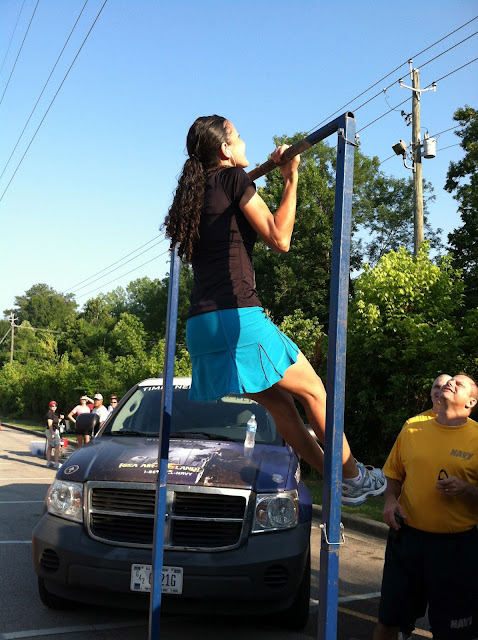 Thank goodness I remembered my sunglasses because I was all about conserving energy before this race. The high temp for the day was 97 degrees, and when I looked at weather.com later in the day it was 76% humidity. Ew, I hate everything about that sentence. Of course, it wasn't the full 97 degrees at our 7:45 race start, but it was hot enough that I had sweat running down body parts before the start of the race. I sweat a lot normally, but still, that's hot.

This race cost $25 with early registration and was part of an Alabama sports festival that had other events like gymnastics, BMX, crossfit, lacrosse, volleyball, wrestling, and basically anything else you have ever heard of. As I mentioned before, the race didn't have a packet pick-up, but it did have some type of opening ceremony for the athletes the night before the race. I guess that's where you go walk around and wave to the people. For some reason, I envisioned this for small children, but after the race, their director asked if I was able to attend. It really wasn't an option with our out-of-town guests, but he did mention winning scholarships if you were in attendance so I maybe could be talked into it if a friend was going (cause you know I'm not normally into self aggrandizement -- oh wait, except for this whole blog dedicated to me, me, me).

We got there at around 7 to pick up our numbers. There were three tents set up, and it was quite low key and simple. We asked a volunteer how many people were running the 10K, and she counted just over 30 registrants. The 5K and 10K started together, so there were about twice as many at the starting line. 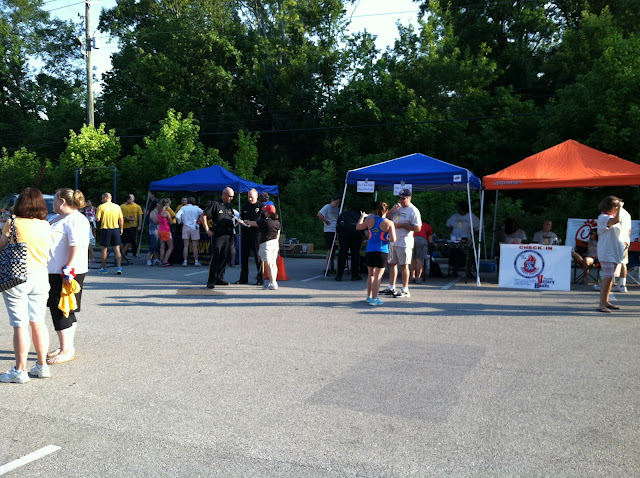 The port-o-potties were the cleanest I had ever used, and they were very well stocked with back-up toilet paper and a full hand-sanitizer dispenser. I thought the male/female signs were funny because no one really paid attention to them. We just used whichever one opened up first. Good try though. 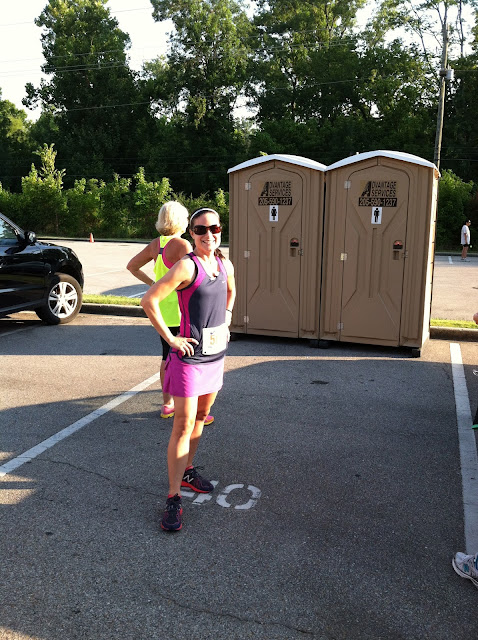 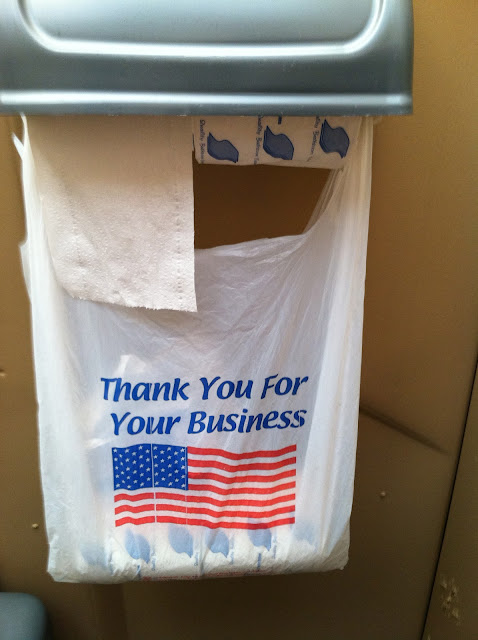 Because the race was small, we got to park right beside the registration and the course. The course followed the Lakeshore Trail, which is a really popular trail here in Birmingham. My only complaint about that is that at that time in the morning, the trail is somewhat crowded so we had to do a lot of weaving in and out of non-racers. The 5K was one loop with a pretty hefty hill at the end, and the 10K was that loop and that pesky hill twice. Aside from my time and pace goals, my impromptu on-course goal was to dominate that hill. I think the hill won, but I at least didn't stop on it. I would also much prefer not to loop twice for a 10K, but it was nice to know what was coming up ahead the second time around the loop.

Unfortunately on the first loop around, the hill wiped out my legs, so I was very tired running the second loop. The whole second half I felt exhausted. There was the whole being tired from running, plus I felt like if I closed my eyes for a split second I would fall into a deep sleep. It was the weirdest feeling to be running as hard as I could yet feel like I could almost fall asleep standing up. Change that to fall asleep standing up and running. It was not something I normally feel during racing or running. Maybe it was lack of sleep? Maybe it was heat? Not sure, but it was not normal.

Also, this 13-year-old guy was my major competition. Not joking. I followed him for a long time until about half way when I needed to pass him. Seriously, I think he was weave blocking me on purpose for a few minutes, or he was just as heat stroked as me and not running straight. So when there was an opening, I had to waste some energy to sprint past him. See, it's not just about trying to beat people in your age group (insert smiley face here). 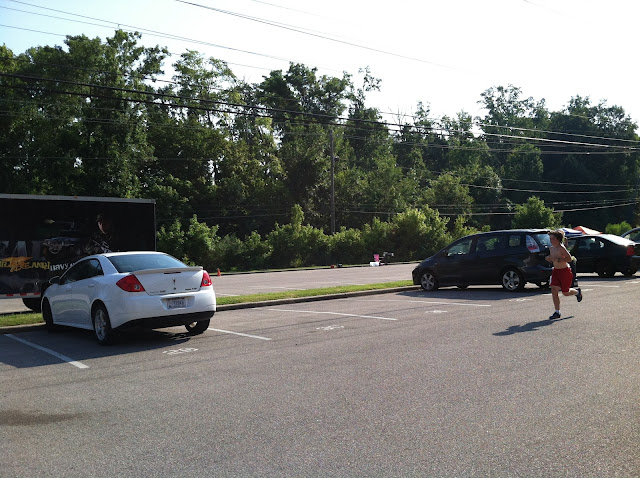 There was one water stop on the course, but the way the course looped, you passed it four times on the 10K, but the two times that you passed it during the loop were fairly close together. Because it was such a sizzling hot day, it would have been nice to have one additional water stop farther down the course. Also, it would have been nice to start an hour earlier to avoid a few sun rays. Runners are up early anyway, right?

The finish line also had drinks and fruit for the runners. I drank a ton, but food made me gag because of the heat.

So as for my performance, I officially met my goal of less than 45:49, but unofficially I didn't. That means that they clocked my time at 44:21:5, but my Garmin read that I only ran 5.9 miles. Apparently, I had no need to worry about weaving in and out of people because I was still 1/3 of a mile short of a full 10K.

My splits looked like a train wreck, in that they got slower and slower with each mile. I forgot to turn my Garmin off, so that last mile isn't correct. So perhaps I redeemed myself a little bit on the last mile. My heart rate average was 167, which means I was pushing it pretty hard. 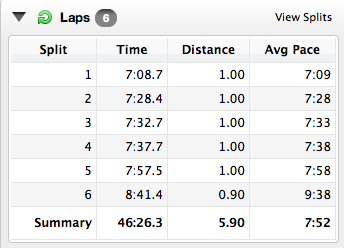 We stayed for the awards ceremony. This tiny girl rocked the 5K in something like 25 minutes. 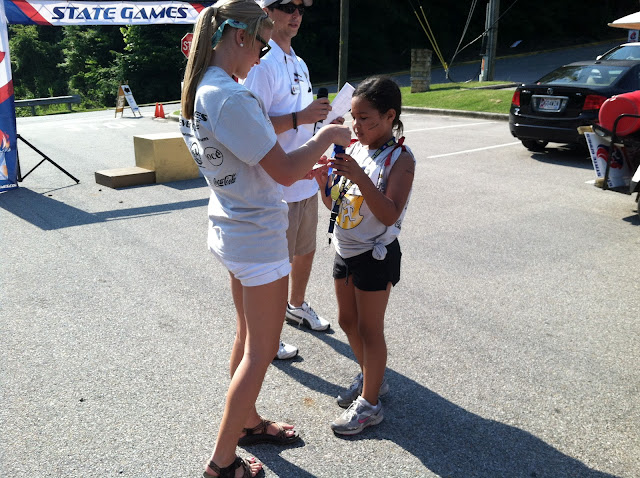 Because the race was small, our age group was 30-39, and out of five people, my friends and I took first, second and third. I was sixth overall. 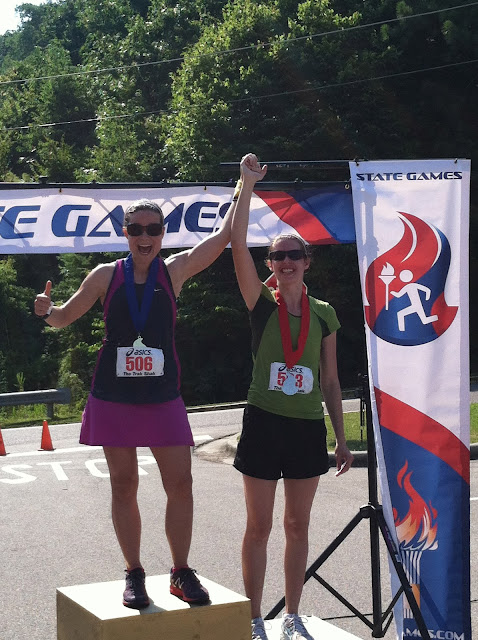 We had to deliver the third place medal because after rocking the 10K this girl had to run home to take care of her infant son. Seriously, e-people, she is hard core! 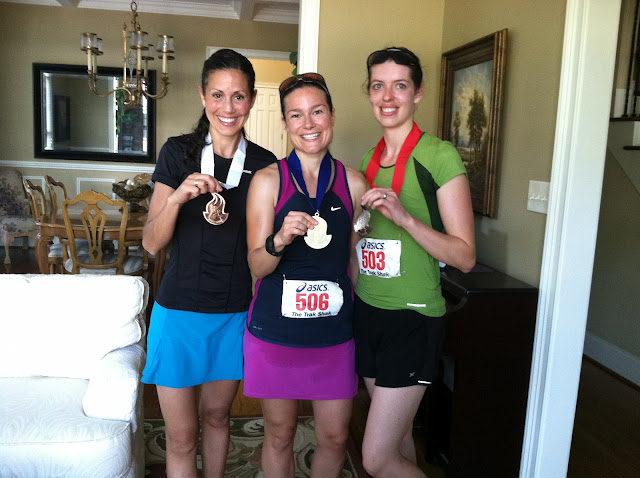 Big thanks to the great Navy volunteers who traveled from all over the southeast to be here. 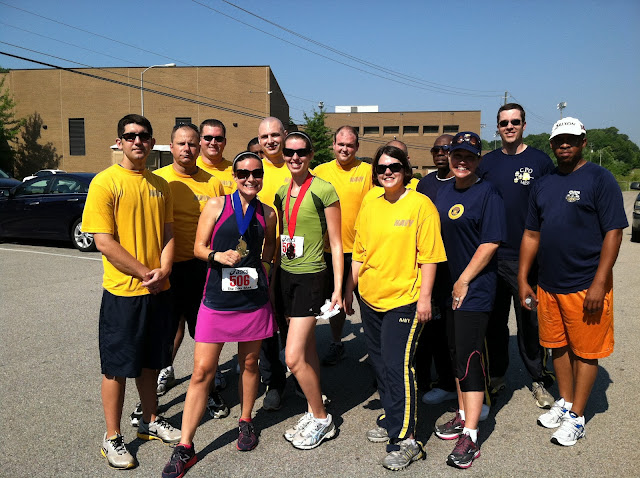 Let's play Where's Waldo for a minute. Does anyone see the volunteer below who looks like my brother? 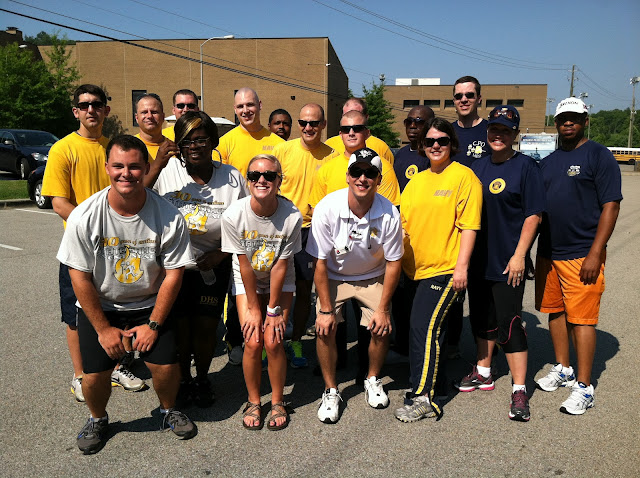 If you forgot what he looks like, here's a reminder. 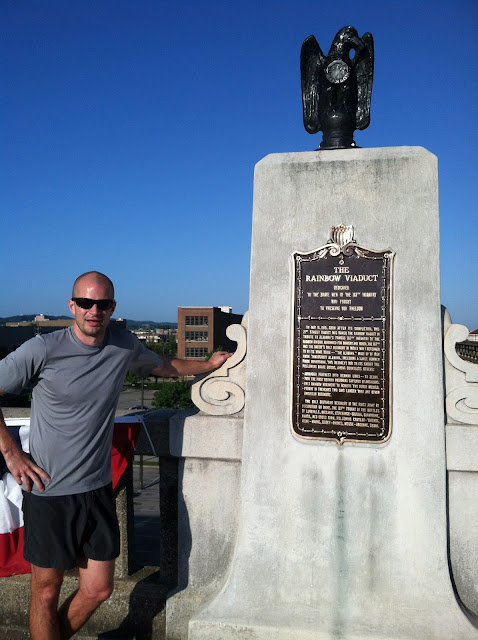 So did you see his twin?

Now on to the goods. I thought the medals were really nice -- chunky with thick ribbons. 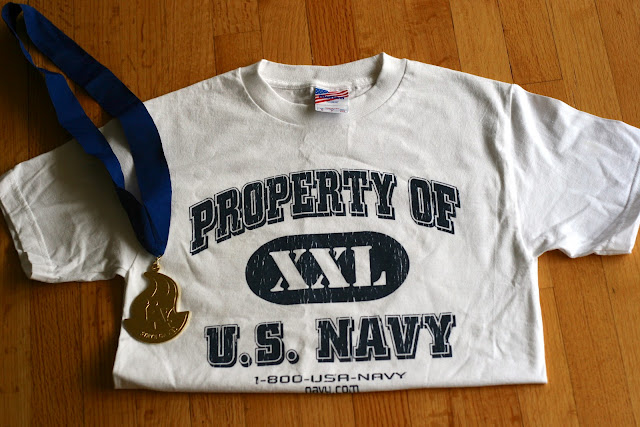 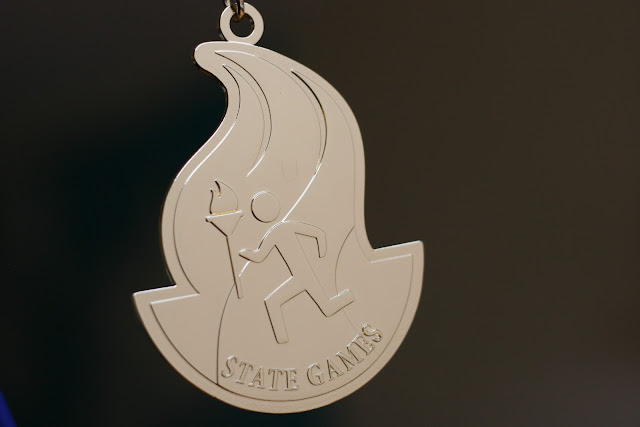 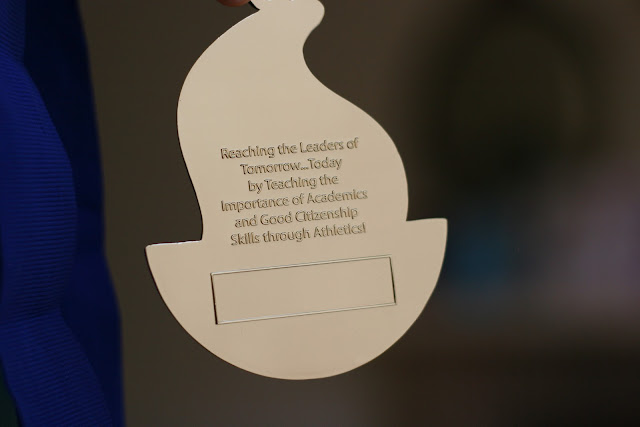 This was their first year adding this event to the Alabama State Games, so I hope that they carry it on into the next year for the people who want to run more than 400m. Hopefully their attendance will grow with each year because it was actually a really well organized event for the small number of people in attendance.
Posted by Unknown at 10:26 AM