Workouts: Monday's workout was seven miles with, get this, a partner (exclamation point) at the track. You read that correctly. I made a run date with a gym regular, turned friend. She missed her ten miler on Saturday because she was out partying down for her 50th birthday. Best excuse I can think of for missing your long run. We took it easy on the track, and the time passed so quickly because of some great conversation. I didn't even look at the clock once -- that's how great the run was.

Tuesday was a rest day, even though I meant to workout but instead cleaned my buns off to get ready for out-of-town visitors.

Wednesday we had another track date. This time for six miles, and we had a third partner join us. I think other runners at the gym are starting to get a little jealous of our track dates. We had two people ask to join us. They acted like they were joking, but I know they really wanted to. Seriously, it's so much more fun than running by yourself on the track. Plus, it gives me some good motivation to slow down and take it easy occasionally. Today's run took right at an hour, so 10:00 pace. Perfect! Then I threw in some stretching and a 2:00 plank. Dunzo.

Now time for some randoms.

1. I'm so glad that I took Tuesday to get the house in order. Even though I definitely procrastinate chores, I know that I will feel like a new person when things are clean and organized.

That means taking time to sort through closet contents and purge. Here's the aftermath of one closet reorganization. Looks like I still need to purge some polish. Weird because I barely ever paint my nails. 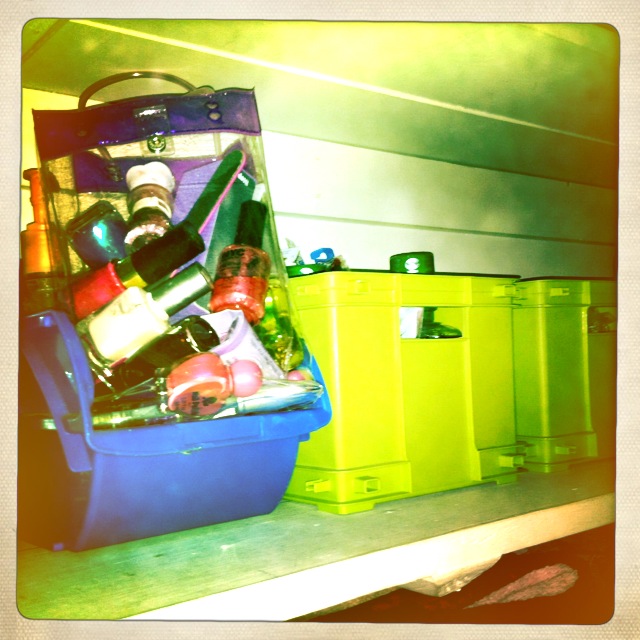 These plastic forks and spoons came out of a vent in the playroom. The twins prefer utensils to action figures. 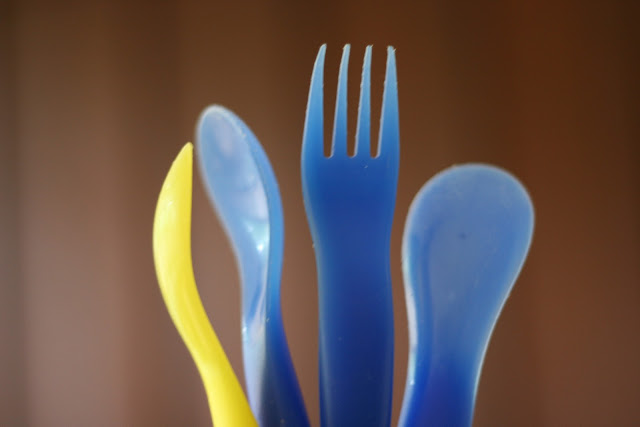 Once they told me that their bad guys were in the vent in their room, and when I reached down into the floor vent expecting to find some plastic army dudes, I instead found twelve plastic utensils. Twelve!

Part of any good clean-up is the giveaway. As much as I like to shop at thrift stores, I also like to give back. This haul was partially made up of toys that were being given away to "kids who will take care of them and pick them up when their mom asks." That's a direct quote from me. Yes, I give away toys as a consequence for not taking care of them. If you have kids, do you ever use that as a punishment? I love it because it helps keep the massiveness of the toy pile in check, and it motivates them to keep things picked up (sort of). Hopefully my kids never read this, but sometimes I sneak toys back out of the give-away-for-punishment pile for sentimental reasons, but I have to act hard and militant in front of the kids so that they don't suspect a parental slack, of which they would take full advantage immediately. 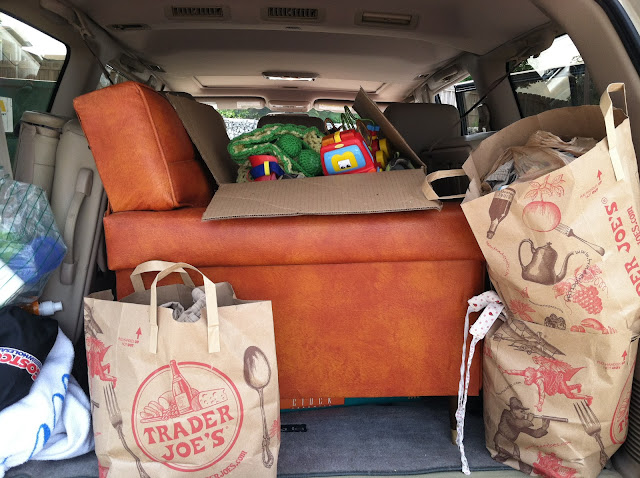 2. Having visitors motivates me to cook fuller meals. We are guilty of the snack dinner, meaning we kind of scrounge around the kitchen and eat easy foods when my husband won't be home for dinner, which is a lot. I'll scramble a few eggs for the kids. They eat some carrots, and I make a fruit shake. Not a total scrounge, but definitely not a meal that we sit down and eat together.

In honor of the scroungeless dinner week for our visitors, I even busted out my favorite apron made by my mother-in-law. This picture proves that taking a full-length picture of yourself with your cell phone is a pretty worthless idea. 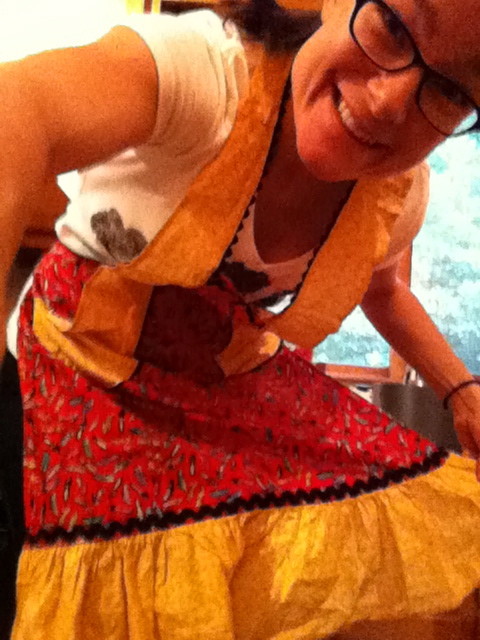 Is that more than one pot on the stove? Go big or go get a snack. You can also see the corner of my laptop because sometimes I watch period dramas while I cook. 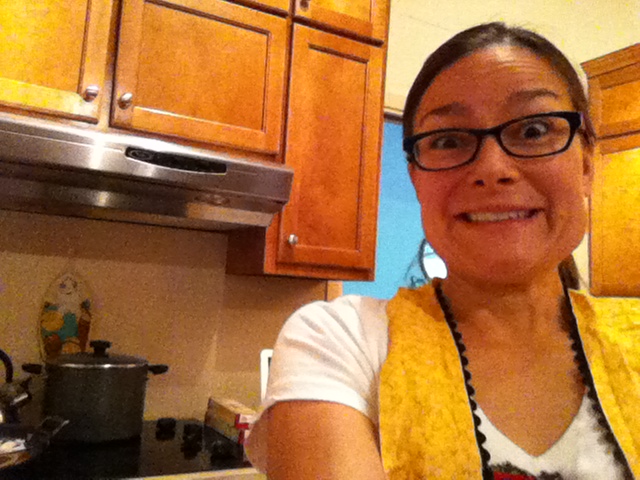 3. Yesterday was the twins' first theater visit as paying customers. It was pretty much just like I thought it would be, pointless. Good thing it was the dollar movie or those ten bathroom trips would have been even more annoying. 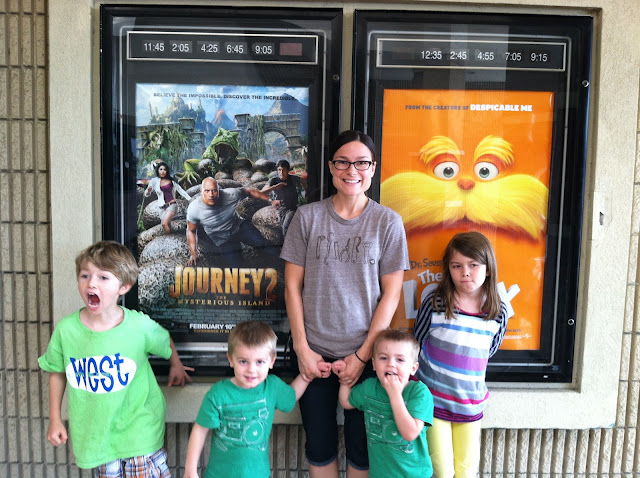 The grossest thing I can think of right now is that my son has his hand in his mouth after crawling on the dollar theater floor. On par with that, they kept taking their shoes off and walking through the sticky theater aisles. Obviously they were really into that movie.

This free playground is definitely more their speed, although we had a heart pounding escape-and-rescue mission. Don't ask how (because the story is too long), but at one point both twins simultaneously escaped and ran straight for the street. Good thing my heart is strong from running because it helped me save their lives as I sprinted up a hill to snatch them both from the paws of traffic. I may have slipped some swears out at that time. My heart was beating faster even thirty minutes later, and I had to keep reminding myself to breath. 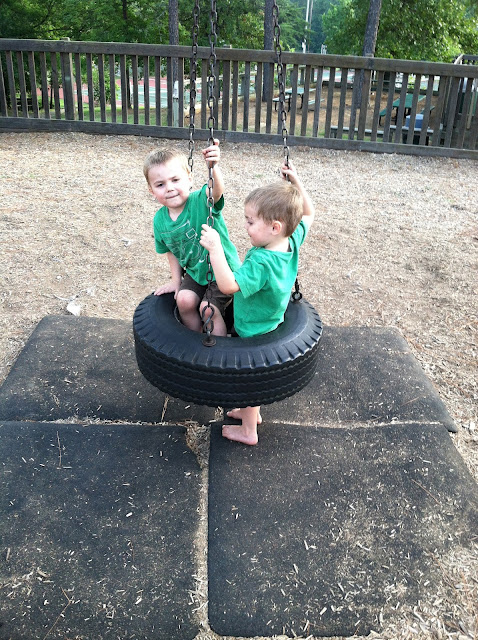 I will not be sad when they grow out of the bolting phase. Every time I think they are out of it, they prove they are not.

4. Best news of the day: I'm going to start running for Oiselle! If you haven't heard of them, they are a running clothing company, based in Seattle (so you know they ooze hip), designed by and for women. Read here about how their company got started. So basically they make super comfortable, functional clothes in simple, cool designs.

I'm obsessed with these arm warmers, even though it's not even winter yet.

Oh, and the shorts in the picture. See what I mean? Simple equals awesome. Comfortable equals even more awesome.

Did I mention I love everything orange?

Do you donate to the thrift store often? We constantly have a donation pile, but I only make it down there to drop it off about four times a year.

What's one thing that you need to get rid of but can't seem to do it? The orange chair was big on my list, until this week! I loved the style, but it was the most uncomfortable chair you can imagine. Think faux leather (before it was designed to feel good) and sitting on a hard plastic, slippery tarp.

Who makes your favorite running apparel?
Posted by Unknown at 6:00 AM