It's taken me a while to write about Run! by Dean Karnazes because unfortunately it didn't inspire a ton of writing from me. Reading a great book is like watching the Olympics for me. Every four years during my childhood, I decided that I was definitely going to become a professional gymnast, and after reading an amazing book, I habitually decide that writing a book is one of my dreams. Here's a secret: it's not really my dream. My real dream is to churn out daily, semi-tolerable blog posts for the world to ignore. You, e-world, are making my dreams come true. So after a good read, I come here and type my heart out.

While the book as a whole wasn't a stunner, there were a few parts that stood out as somewhat funny, crazy, or inspirational, but first let me tell you why I didn't like it. Most of the stories he told seemed like you were eavesdropping on the middle of a promising conversation only to find out that you missed the first part of the story so now you don't quite get it. Maybe if I had read Ultramarathon Man, his first book, I would get it, but I think the main problem was that the writing was just OK. The ideas might have come across more vividly if he had a pro helping him document his stories.

It also felt like most of the time we were intentionally only being given the parts of the story that glorified the author. We heard tons of little excerpts from his runs that turned out poorly (i.e. made him look tough), but when he talked about his family it was all roses and sunshine. We're all part of a family in some way, so we know that no family is perfect. It ain't all roses. So to portray your family as so ideal is not only boring but comes across as insincere. That insincerity led me to question the sincerity of other relationships and exploits in the book.

The one story that really left me hanging was his attempt at a Guinness record on the Regis and Kelly show when he implied that the person who set the record before him in some way cheated. He was trying to run the farthest on a treadmill in 48 hours, but he missed the record by a good bit. I was hoping for that story to take us somewhere, but again, he made some broad strokes at a story and then left us hanging wondering about the details. Did the record holder cheat? Was it even physically possible for the other guy, an untrained athlete but a professional Guinness record setter, to run that far in that amount of time. I really wanted to hear the full story on that one.

So now on to some of the tidbits I liked from the book.

Here are some funny spots: 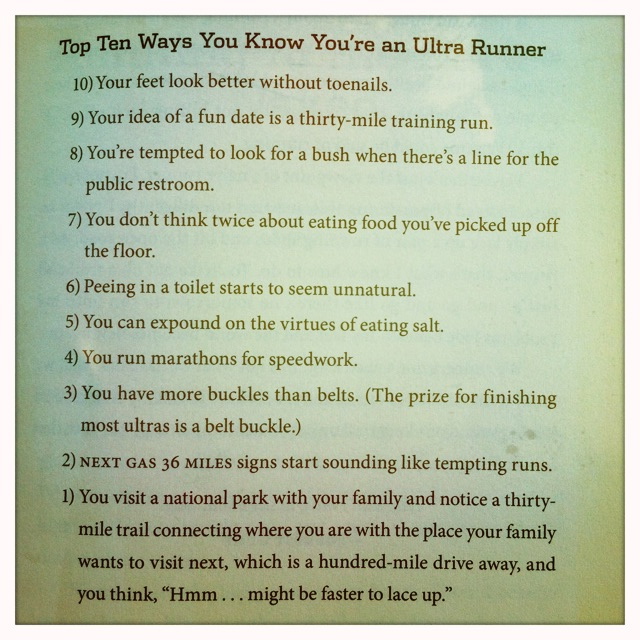 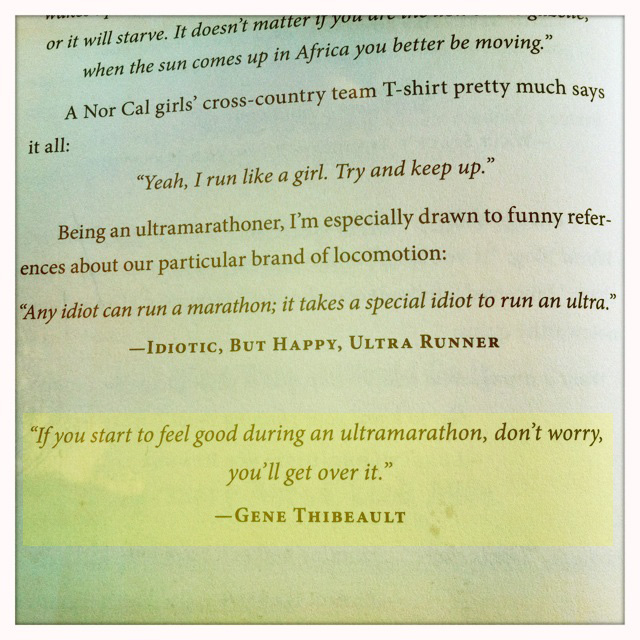 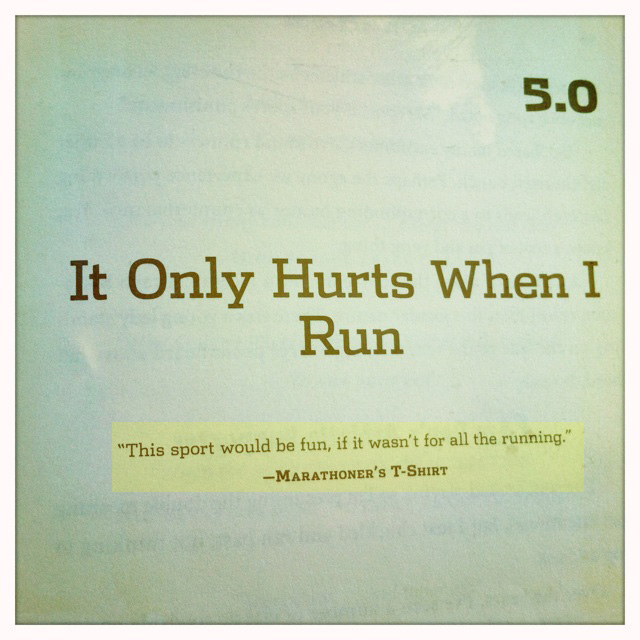 Here's some inspiration for when you feel like giving up: 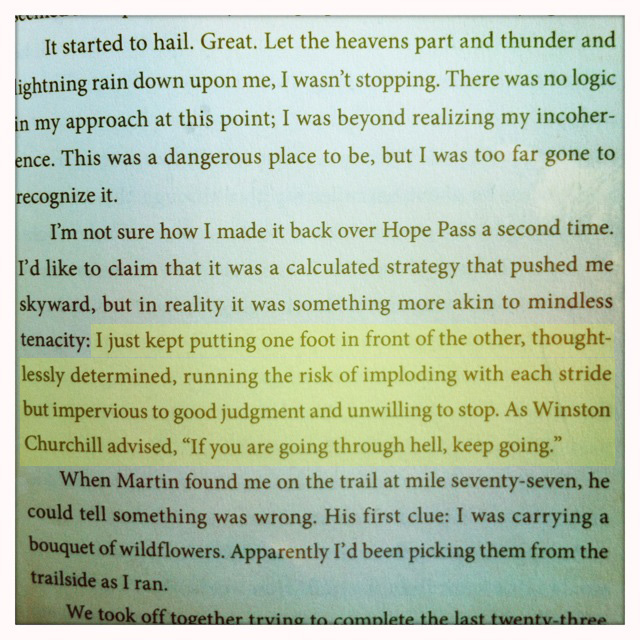 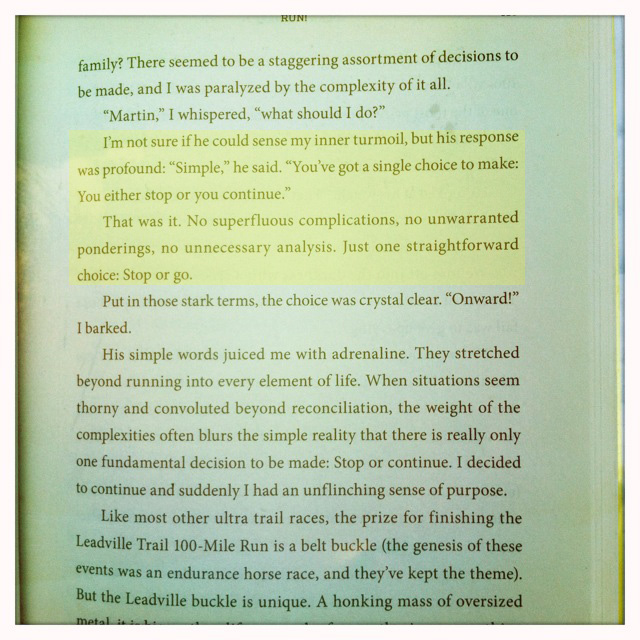 I love this next idea that we wade through failure to grow. 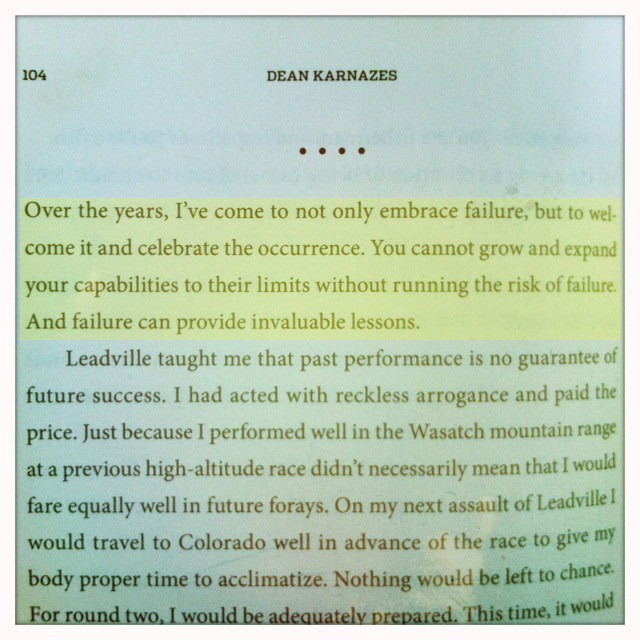 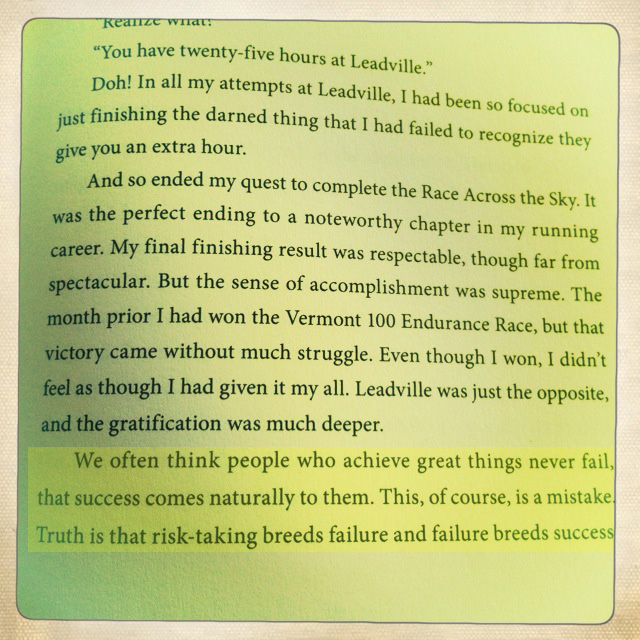 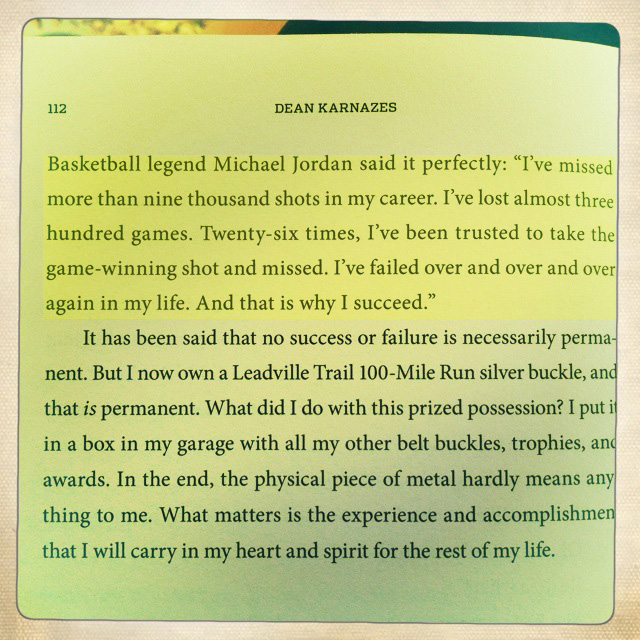 Below was the single most poignant passage in the book for me. 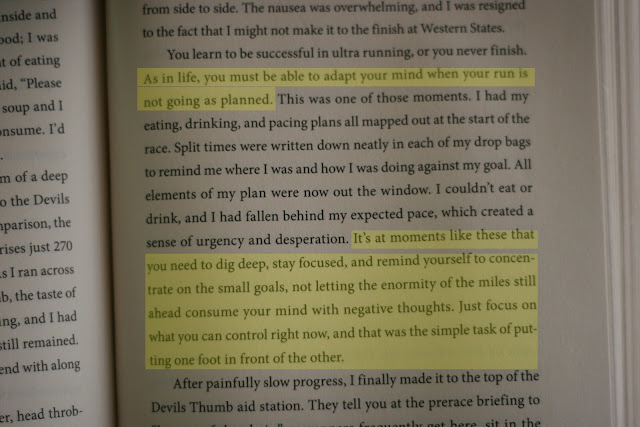 I actually teared up when I read this. Not because I was thinking about running, but because I was thinking about life. When I am knee deep in half-broken toys and skid-marked underpants, I need a little reminder to just keep moving forward and not get bogged down by the day-to-day duties and the bigger disappointments that life inevitably brings. Just keep moving forward.

So even though I was overall not completely enthralled with Run!, there were several segments that I put in my inspiration arsenal. Thanks for that, Karno.

Have you read any Dean Karnazes books?


If yes, what did you love or hate about it?


Have you run any ultras? No, but I've considered adding a local 50K to the schedule next year. Baby steps. A heck of a lot of baby steps.