Monday: 6 miles
Tuesday: 13 miles in 1:50 (making this up from a skipped Saturday run)
Wednesday: 8 miles
Thursday: much needed rest

These workouts felt hard as heck. The 6- and 8-mile days included faster miles in the middle, totally kicking my tail feather, which felt more like a tail boulder. Tough nuggets. 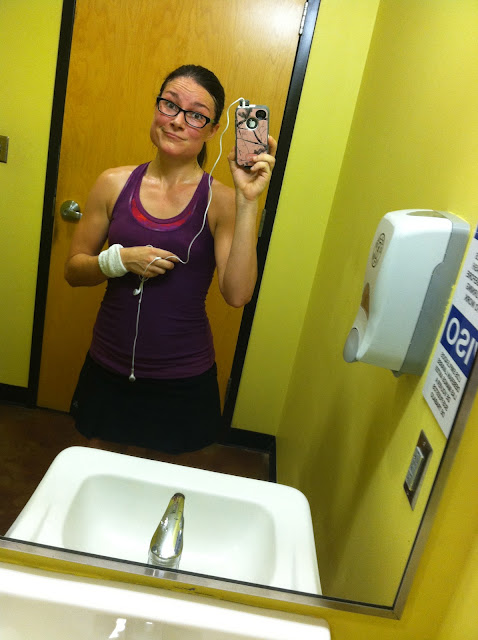 Sometimes I use outings with my daughter as blogger training camps. Lesson one: master the art of self portraits in bathroom mirrors with crapster camera phones. She nailed it. 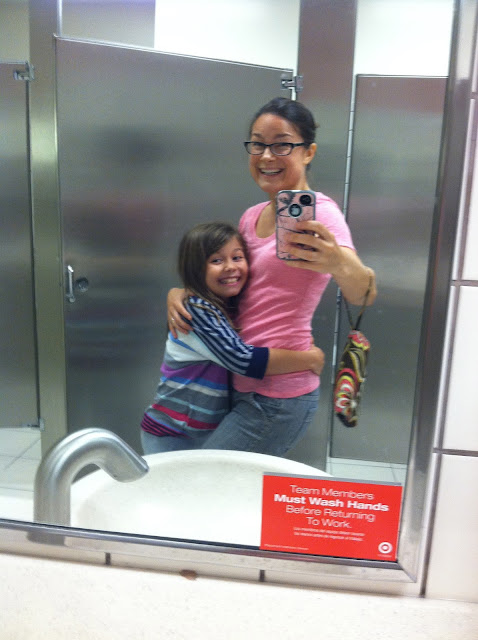 We're currently at a family reunion where I just figured out that our hotel has the most horrible wireless internet that ever existed. Al Gore would be so ashamed right now. So instead of wasting three more hours trying to load some really amazing pictures, I'm going to give you some random thoughts. Joy.

1. Stacking this week's runs on three consecutive days felt like my old Hanson days. So when I finished those 8 miles on Wednesday, I felt like a rock star. A slow, decrepit, pains-shooting-in-every-available-direction, hobbling-the-rest-of-the-day rock star. Super glamorous. Today's rest day felt a-mah-zing, and I'm looking forward to some family soccer for tomorrow's cross training.

2. As some of you may know, I use my bra as a pocket or satchel. On long runs, I can store enough food to feed a small, starving family (read: three GUs) and my phone. This week during the 13 miler, I had some serious chafing, which I normally don't have, from my phone, and I felt nervous that I might have to give up using my bra as a phone pocket. It's so convenient that this thought brings a tear to my eye. I know they make belts and arm bands to carry phones, but honestly, the less stuff I have to strap on during a race, the better. But my phone, now that I have to keep with me. I use my phone for music when I'm indoors, and when I'm outdoors, I use it for safety. My husband can always ping it in case he's worried, and he pings it to locate me in races too. That way he can pull up to a spot just as I'm running by. Timing is everything in race spectating. So my new trick for races might be wearing two bras. Not because I need extra support because I could actually run without a sports bra and probably never notice the difference. The bottom-layer sports bra would be the skin protector, and the top-layer sports bra would hold in snacks and my phone. And maybe I could fit some tools or small pets in there too. This plan is really starting to come together.

3. My son has some serious shag hair going on right now. I'm waiting for the free JCPenney haircuts starting in August, so I'm letting him shag it out a bit longer. Today, as he was finger styling his hair, he told us that the hairstyle he had just given himself was the best he's got, and that he'd like to call it the Man of Your Dreams hairstyle. Is it even possible to stay that cool forever? Because I'd like that.

In case you didn't hear, Aspaeris is having a sale on compression shorts. Buy a red pair and get a black pair free. The code is down there on this coupon, but in case you like to read it in paragraph format, it's RUNRED45. 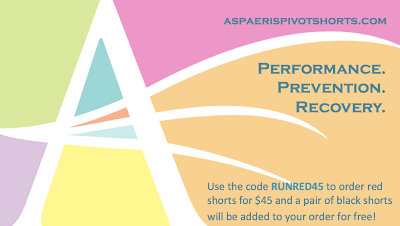 And if you haven't entered to win an entry to the Go Commando Half on October 20th, visit my giveaway here. Your chances of winning are high right now!
Do you run with your phone? If yes, how do you carry it?


What would your Man of Your Dreams hairstyle look like?
Posted by Yo Momma Runs at 12:45 AM