What can $10 get you? A drive-through meal or two, a pair of really nice socks, a pack of toilet paper that will disappear within a week, a few gallons of milk, one package shipped to a friend, one month of average shows on Netflix. Oh, and a race! When I saw that our local track club was hosting a July 4th race for only ten bucks, I was in. If I wasn't in, I was lame.

Peavine Falls Run is 8.2 miles which include a straight uphill climb with, what felt like, very few respites of flatness and then a slingshot at the top to blow you right back down that hill you just conquered (that's if you have a liberal definition of that word). And just for funsies, they throw in a 1.2-mile patch of trail at the end in case all the downhill didn't make you wet your pants bad enough already.

Being new to the area, I haven't heard of this race before, but it's been around for over 30 years. Apparently, our people, meaning runners, enjoy torture. And the cheaper the torture, the better. From the results online, it looks like around 500 people registered. For an offbeat race distance on a pretty hellish route, that's a heck of a lot of folks, especially if they already know what they are getting themselves into with this race.

I was one of the lucky clueless ones. I had read online that it was uphill and then down and then something about single-track trails at the end. You can tell I'm pretty attentive when I'm reading, right? Mostly, I focused on the $10-race-entry information -- cheap enough that you could even treat your friends to race entries.

So I signed up myself and my brother the day before and laid out my Oiselle racing team outfit, my first run for the lady birds (exclamation point to the power of five), that night. When picking out shoes, I decided to go with my most minimal trail shoes because we would be on soft, lovingly gentle trails in the state park. Right? Turns out that I also missed the info that we would be running on roads the first 7 of those 8.2 miles, and half of those 7 miles would be spent pounding your brains out on a downhill chute to either the finish or your face on the asphalt from legs moving out-of-your-control fast.

Seriously, I have a hard time maintaining any kind of form or control on any downhill steeper and longer than a park slide. Just ask my mom bladder. It'll tell you the same. 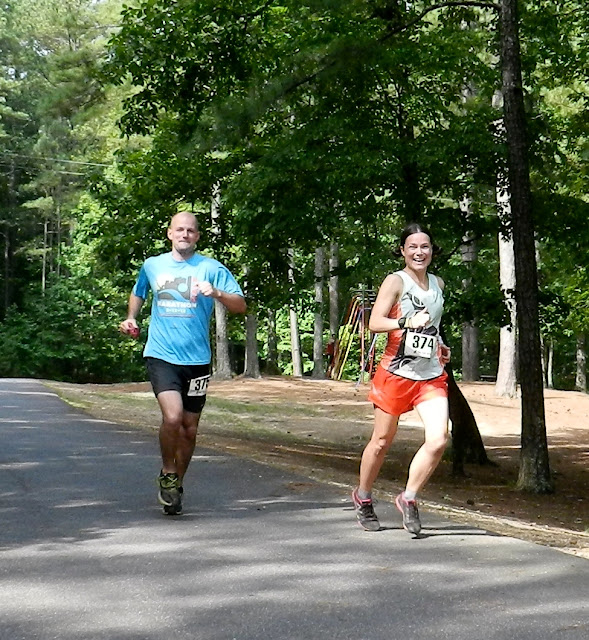 Yup, I wish I had worn some cushiony shoes. The balls of my feet complained for at least four days afterwards, and my calves were also giving me the silent (but deadly sore) treatment. My first thought after the race was, why the h did I not wear one of the millions of pairs of compression socks that are all clean and neatly (sort of) folded in my drawer right now?

When we arrived at the site that morning, the line to get into the park was backed up so far with cars that we couldn't see the entrance hut. Unusually long line for Oak Mountain. Last time I went to a race at the park, I zipped through the same entrance. Once we finally made it to the gate that morning, we figured out that the problem was that July 4th is half-off park entry. So people got up to the gate thinking that they had correct change for the park entry fee of $3/person, and then they had to regroup or fidget around and figure out what to do now that it was only $1.50/person. That's just our theory, but we're really awesome with theories. So go with it.

The race director, shout out to Rick Melanson, made a great choice to delay the 7 a.m. start to let as many people get through that crazy entrance line as possible. At around 7:20 a.m., we all lined up. Someone said a short prayer (please bless the crazy runners), and the horn blew. Within the first mile, both of my shoes came untied (they were double knotted, so that should have been impossible), and I had to stop on the side of the road to tie them. My brother patiently waited for my slowness at that point, but I was really glad when a bit later, when I was struggling on the hills, he took off to push himself for the rest of the race. He usually holds back and runs with me during races we enter together, but I was really happy that he pushed it that day.

Even after waiting for me to tie my shoes and slow jogging (for him) with me for a bit, my bro still came in 30th overall with a time of 58:48, and if they did age group awards, he would have been second in his age group. Nerdy that I counted that out. Word (to our mother). 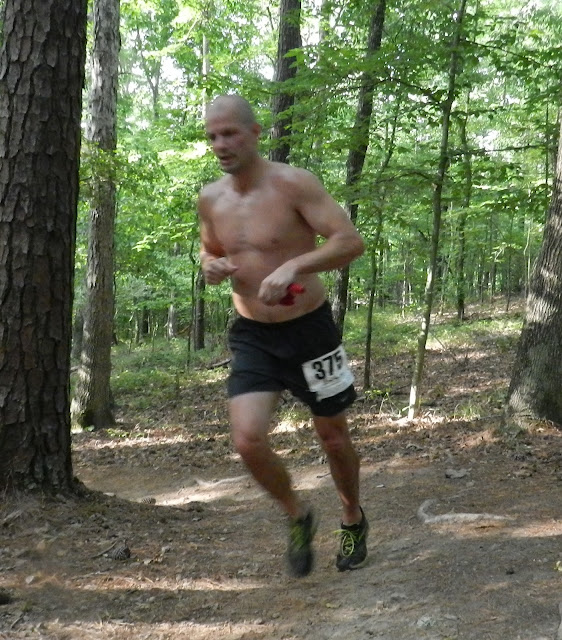 My single thought on the uphill, don't stop, don't stop, don't stop. That deep thought process continued to the very top, after which my downhill thoughts turned to, don't fall, don't pee my pants, don't fall, don't pee my pants. Because I had basically zero cushion for my feet on the downhill, I tried to step as lightly as possible. This may have even helped my speed, but pretty much this whole race was about self-preservation. Get to the end alive and/or get back to the toilets as fast as possible.

On my way down, Michele Parr, who was looking strong on her climb (and who you might know from the Birmingham Track Club Newsletter), yelled to me that I was in the top ten ladies. Top ten ladies get a cash prize, so I thought I would push myself a little harder. Looking at the heart-rate stats, I pushed myself way harder. I honestly have never seen anything over 180s on my heart-rate charts. Usually I'm busting my butt at 170. It was pretty hot that day, so even though my time wasn't super speedy, the hills and heat had me working pretty much the hardest I've ever worked. I saw some e-discussion over at Crazy J's about whether this race is harder than Statue to Statue 15K, and my heart rate says this race was harder. Statue to Statue: 162 average, 180 high. Peavine Falls Run: 181 average, 210 high. And my average speed for Peavine was slower per mile for a shorter distance.

In summary, either Peavine is a harder run than Statue to Statue, or someone slipped some crack into the Gatorade.

Here are the final numbers for the splits. Wow, someone was optimistic that first mile, which included two shoe-tying stops. The official stats for me were 1:05:46, 8th place lady, 71st overall. Looking back at the heart-rate chart, I'm just lucky I didn't require a gurney at the end. 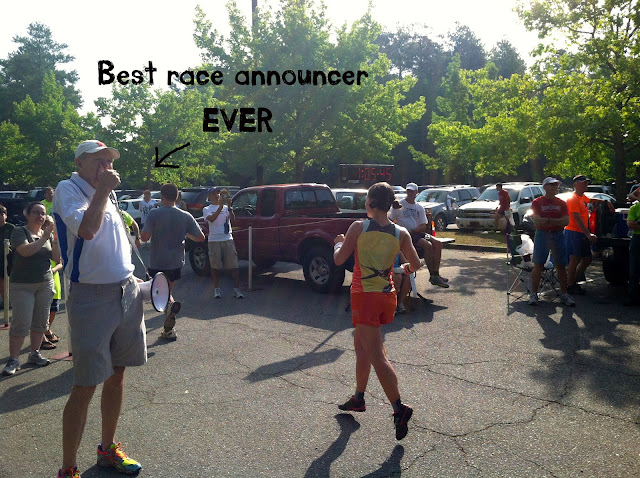 To top it off, while we were waiting for awards, my friend David Christy, who is the track club's volunteer photographer, asked me to do hill sprints because he missed taking my picture during the race. But also thanks to him, I actually have pictures for this race report. Thanks, dude! 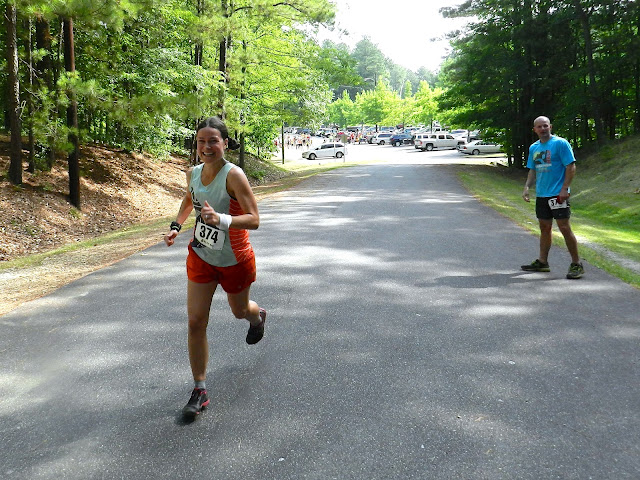 Also while waiting, I met fellow Birmingham blogger Melissa from My Running Journey ... for better or worse. Unfortunately, my camera wouldn't work because water found its way under the Otter Box cover. There is no photo evidence, which in blog world sort of means it didn't happen, but it was great to meet a local blogger!

Oh, and I know you're waiting to hear about that sweet prize money. Don't be jealous, but here are my earnings. 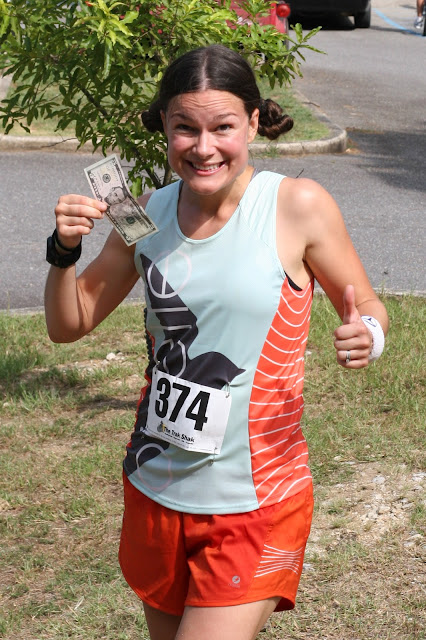 When I opened the envelope, I said with a twangy Southern accent, "Well, isn't that precious?" But seriously, for a $10 race, I'm surprised they had water cups. So five bones was an unexpected bonus.


Will I do this race again? Heck yes! For your money, you get plenty of snacks and drinks, a tough-as-nails course, a smidge of trail racing, a shirt (see it on Rick above) to prove you did it, and great fraternizing with the locals. Love, love, love. What better way would there be to say "I love America" on Independence Day than by busting your buttsauce at Peavine Falls? None.
Posted by Yo Momma Runs at 5:41 PM