Training plan changes and a slice of Hotlanta

Workouts: I went off the plan last week. It all started when I needed another day of running. So far the paces with the Run Less Run Faster (RLRF) plan are either way faster or way slower than what I want to hit on marathon day, so I thought I would start adding in one day a week of a marathon pace run. I stole this idea from my Hanson plan (love you, dude). So on Friday, I did 6 miles, average pace 8:10. I just really want my legs to know what 8:13 feels like for race day, but I think the speed in RLRF will help me get my 1:42 at the Nashville Women's Half.

I followed up my gung-ho extra day of running with a skip of my long run for the week. Don't worry, kids, I plan to make it up today, but I thought it was kind of funny that I was feeling all cool about showing my training plan who's boss on Friday, just to flush it down the rest stop toilet on Saturday.

My amazing sister agreed to watch our four kidlets while we went on an overnight date to Atlanta, which I will from this point on only call Hotlanta. It's impossible not to, so there's no reason to fight it any longer. 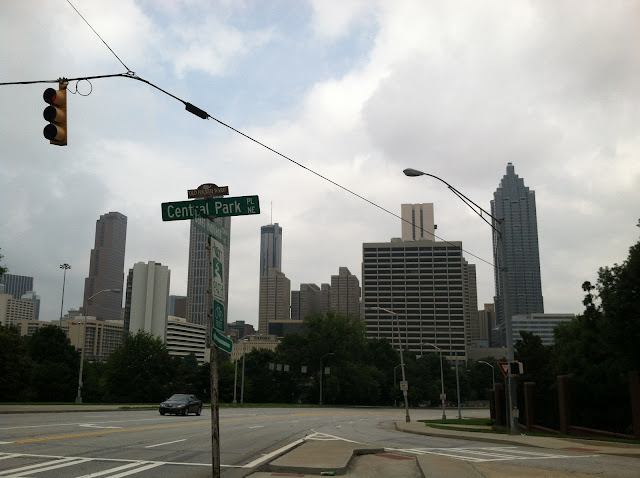 We stayed at the super hip Glenn Hotel in downtown ATL. I knew I was going to like it when they gift wrapped my toilet paper. And in orange. 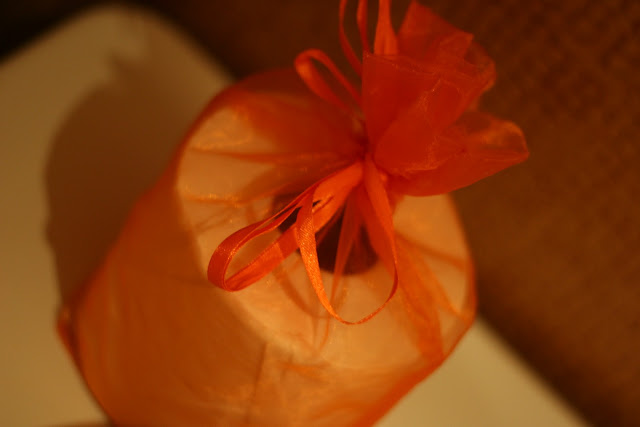 Some other highlights were the spooky glass recessed heads. Two can play this creepy staring game, glass head. 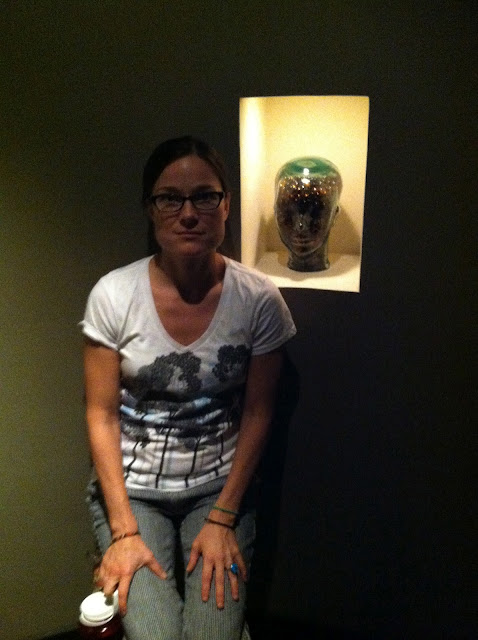 Hallway grass, for when your tiny pet rats need a place to go. 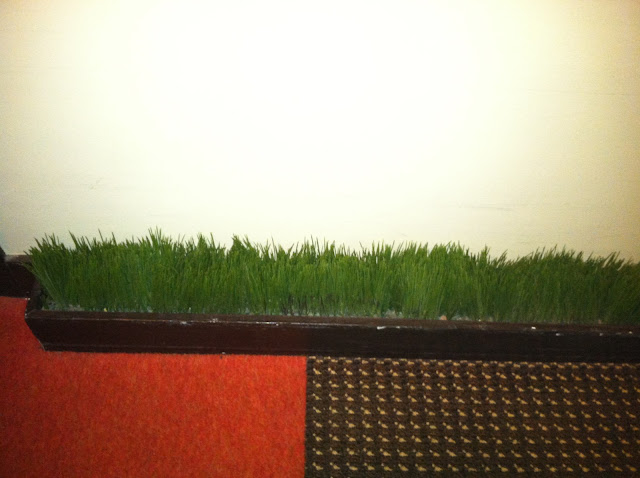 Giant exercise mats. Don't ask why I thought this would be a good bed picture pose. Some things just happen when you jump on a freshly-made hotel bed. 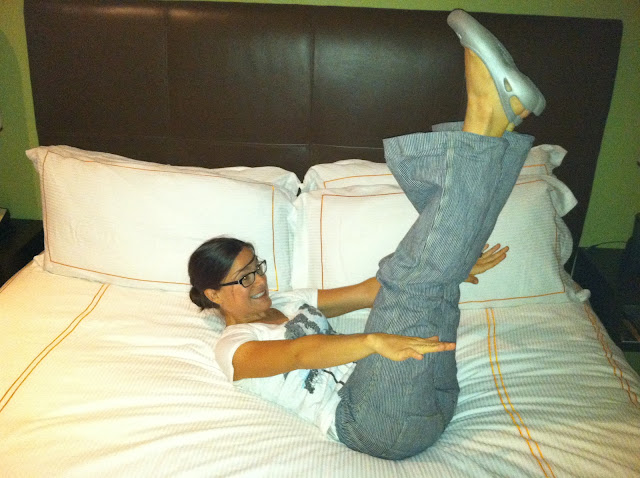 And even though, surprise, my camera phone took a crappy (oh man) picture, I needed you to know that I got the most important shot. Corner toilet, don't mind if I do. 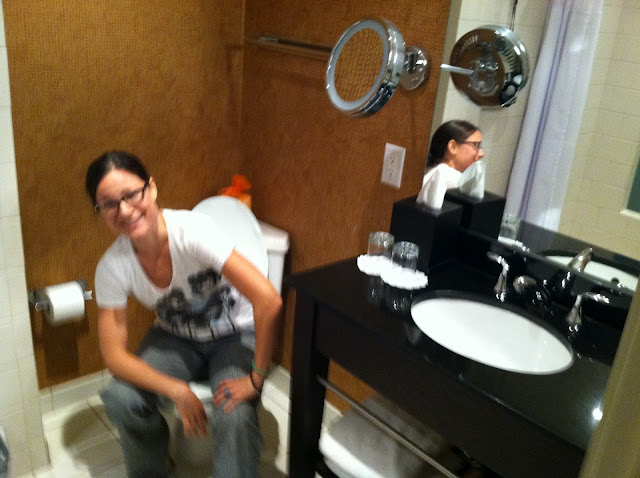 When we first walked into the Glenn to check in, there were dozens of people in the small, open lobby/bar, and I felt like we just walked into someone's cozy house party. We were about three notches below cool enough for the lobby scene, so we tried the rooftop lounge. Also, slightly too cool for us, and the seating was limited. So we took to the streets.

Can anyone from ATL help me identify this building? We were pretty sure it belonged in a science fiction movie produced in the 80s. 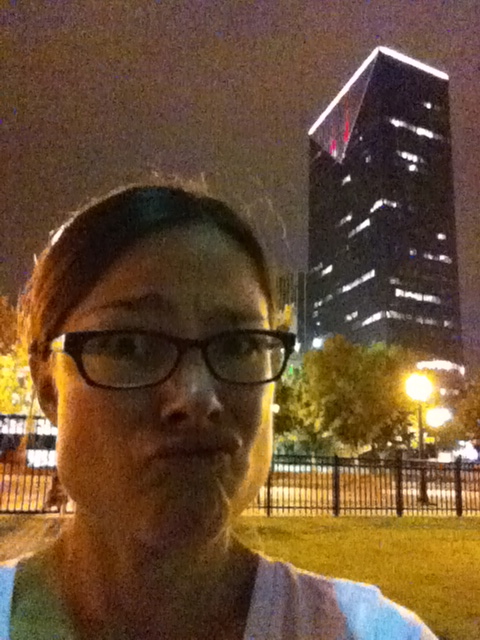 Spock called and wants his Vulcan IDIC back.


The hotel was right beside the Centennial Olympic Park, where we learned that not all Southern statues with giant mustaches are Colonel Sanders. I was shocked. 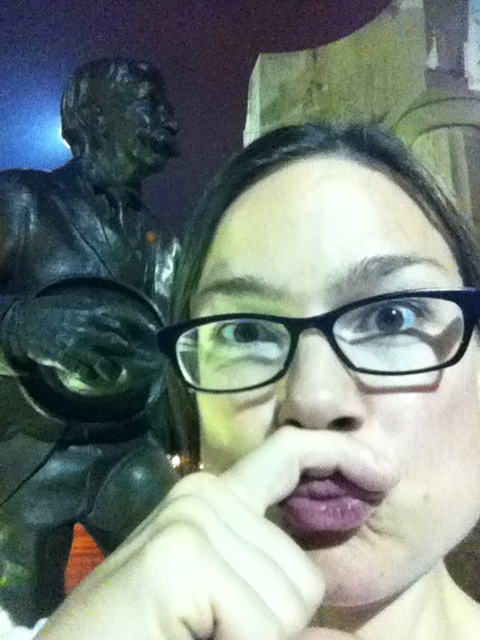 Turns out that this mustache-ier is the Frenchman Pierre de Coubertin, father of the modern Olympic games, who apparently had the most unusually large hands. Perfect for holding on a midnight stroll in the park. 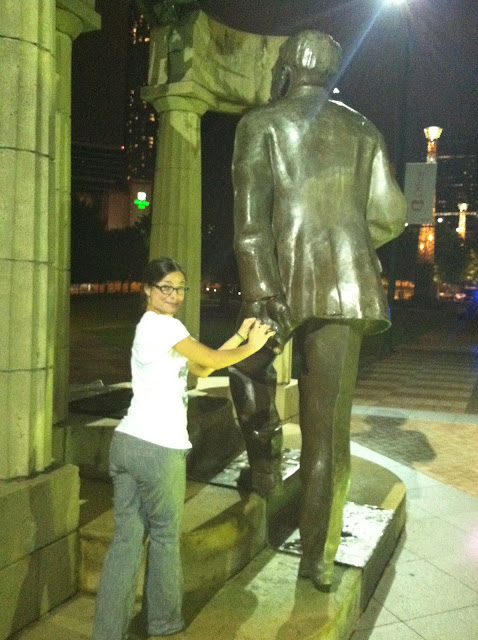 The next day, we woke up late and just sat around amazed at the silence of a hotel room without kids. Turns out that we are pretty quiet when we don't have four small people surrounding us. 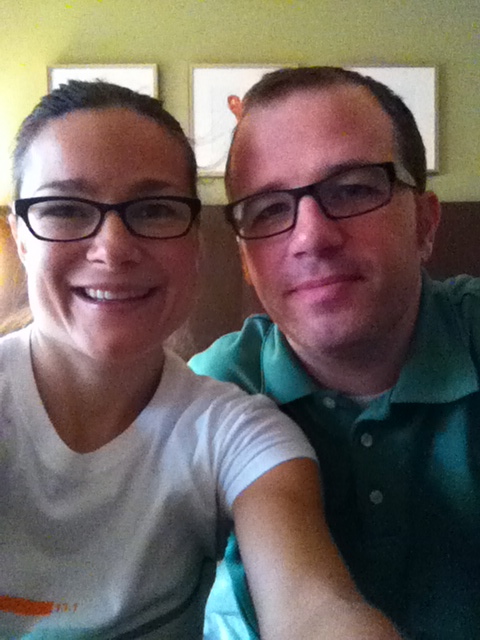 The best decision of the trip was to hit up the Highland Bakery. If you are in Atlanta, you just absolutely have to go there. Unless you hate delicious stuff. 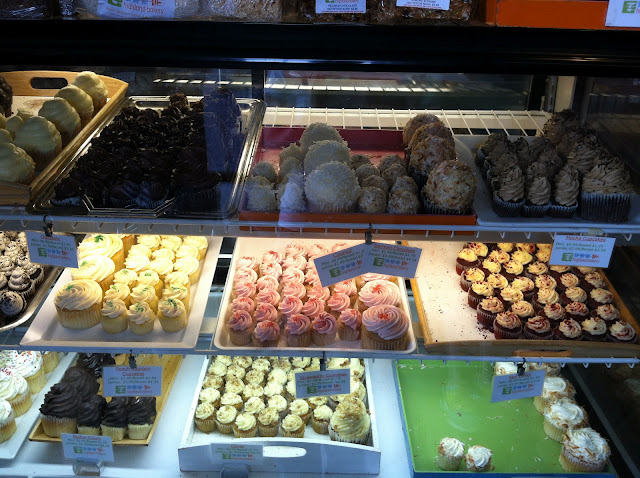 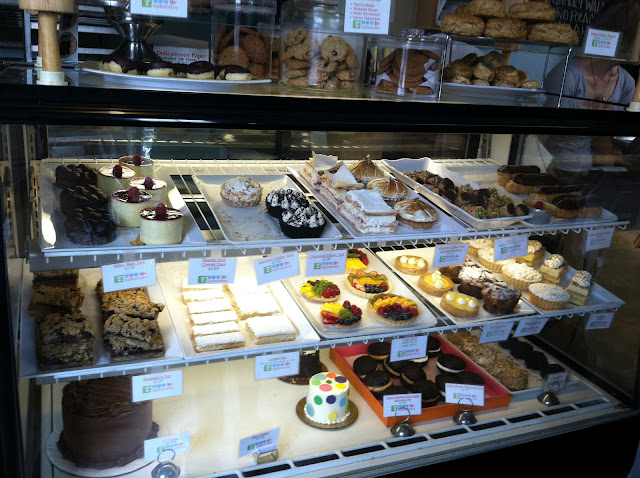 While we waited for a table, we sampled a few of the bakery items. Fresh cinnamon rolls and sweet potato biscuits. 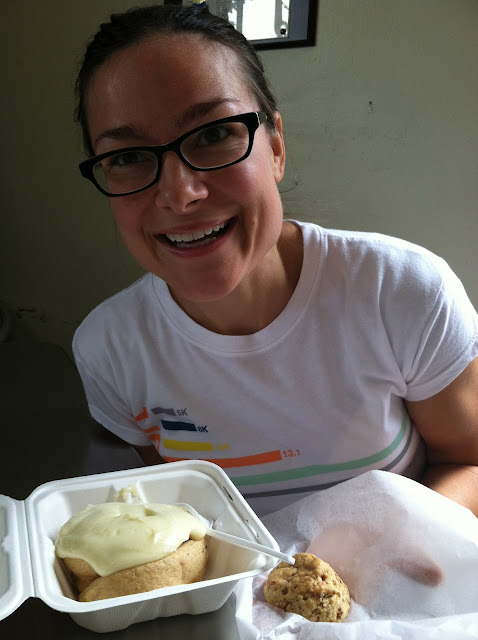 For the main course, we decided to share the shrimp-n-grits and the peanut butter french toast.

Holy amazing grits! And the jalapeño focaccia was a perfect addition to the plate. 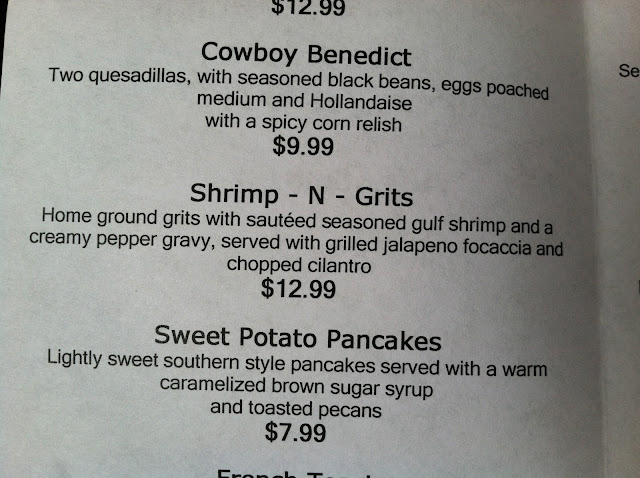 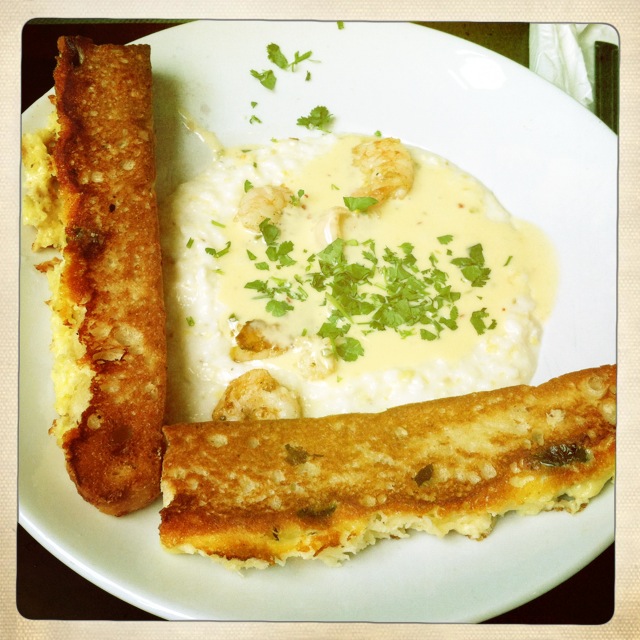 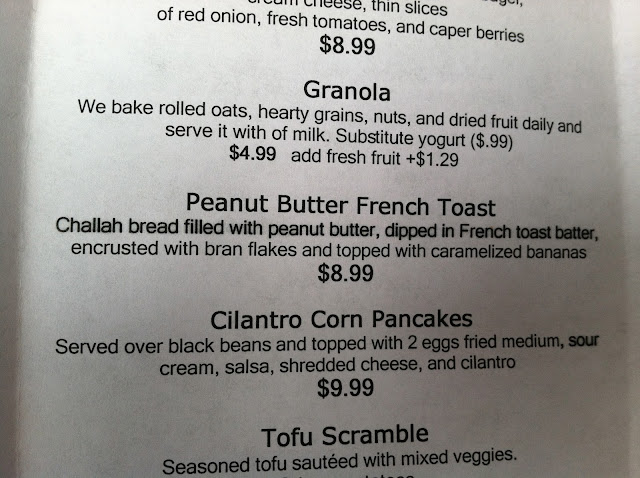 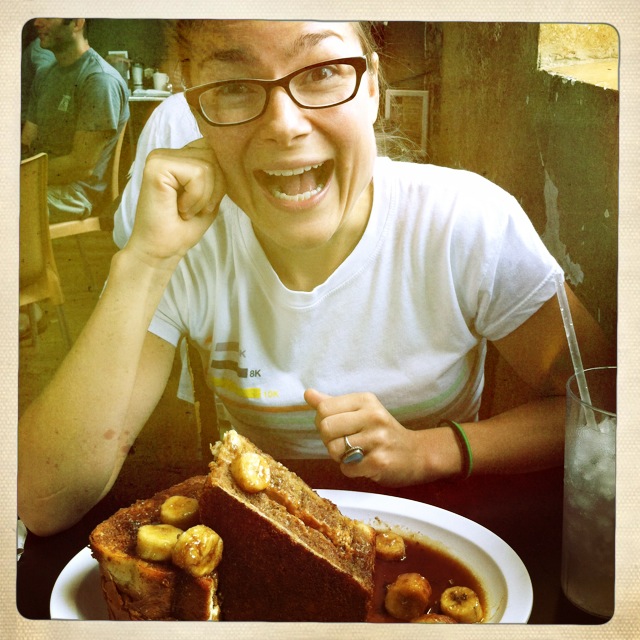 I could barely see my husband over the french toast massiveness. 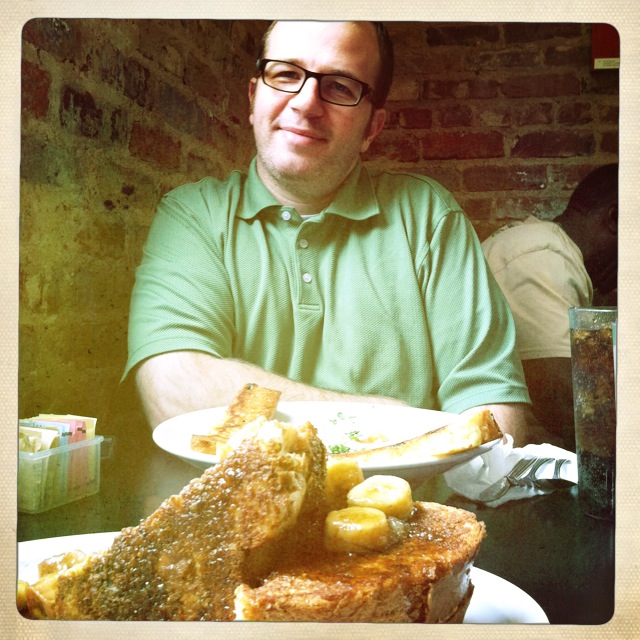 We were in food heaven, and between the two of us, couldn't finish the food. That basically never happens to me. I'm giving this place a hundred thumbs up because 1) everything I tasted was fantastic, 2) the prices were reasonable, 3) the portions were giant enough to turn one meal into three. Definitely go there hungry.

What was the last change you made to your training plan?


Where was your last date?


If you have kids, do you ever get away for a weekend without them? It's a very rare occurrence for us, but I love it because it reminds me why I like my husband so much.
Posted by Unknown at 6:00 AM