Oh my freaky gosh, my long run today was the exact opposite of last week's train-wreck run, and guess what worked -- my fueling.

As I was lying in bed unable to go to sleep at 11:30 last night, I felt slightly hungry, so I grabbed a bagel. I was chomping as I was counting down from 100 to try and lull myself into sleep. In the end, I was unable to sleep until 1 a.m. My heart was beating from nervousness over not hearing my alarm and waking up. No, I didn't have any caffeine, but I was still hyped up and wound tighter than a pair of purple skinny jeans. Somehow after all of the non-sleeping, I still made my 4:30 wake-up call.

Here was my morning fueling:

3. Drink another glass of water with a heaping tablespoon of soaked chia seeds.

Remember how my brother planned to arrive at my house at 5 a.m. to watch my kids so that I could take off to run? Then we planned to meet at mile 12 so that he could finish the run with us while pushing my twins in his double jogger.

I think part of me just assumed these plans would not work. The early meeting time, the random meeting spot, the fact that last week's run was so shoddy.

Well, I was wrong, wrong, wrong. After a full night of thunderstorms, I woke up to dry skies. My brother made it in perfect time for me to jet to the running group's meeting spot. I called my brother at mile 9.5, and I'll be dad-gummed if he wasn't ready and waiting at mile 12. The twins gave me a warm reception which amped up my energy level for the second half of the run.


At mile 17, I tried to talk my brother into just hitching a ride back to the other car, but he refused to hear it. He repeated about 20 times, "I didn't get up at 4 a.m. so you could run 17 miles." Because you know, 17 is so much less than 20. Coach Big Brother forced me to get a move on. Then we not only finished the 20, but we accidentally ran 20.9 trying to route back to the car. By the end I was begging to stop, and I think I told my brother that he was the meanest coach ever and that I wanted to stab someone (possibly myself) in the eye.

The fueling continued after the run:

1. Half a protein bar immediately after the run. And water!

3. A healthy dose of Nutella. 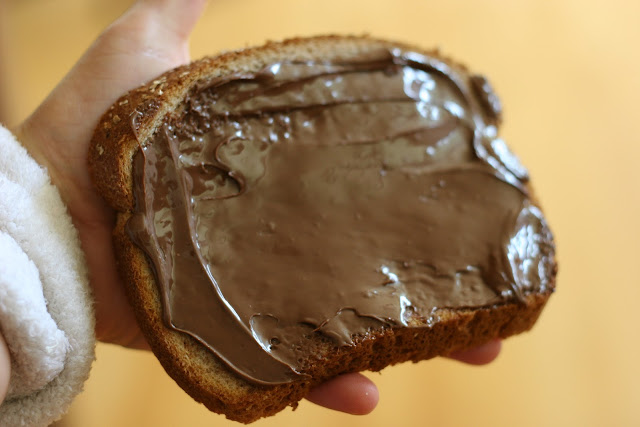 5. Two more slices of pizza and carrots for dinner. I'm trying to finish off leftovers quickly because our fridge is on the fritz.

7. Another slice of pizza.

It's hard to plan well-balanced meals with long-run brain. Thank goodness we had pizza leftovers and Nutella, or I may not have survived the post-run fueling.


My heart is crying over the Olympics ending tomorrow, but I know what could make it better -- if Puma would start selling these shirts again. Bolt may be the cockiest athlete at the Olympics, but if I were giving medals for most awesomest customized shirt, he would also win gold for that. C'mon, Puma. Sell this shirt to me, please.

How was your Saturday run?

What will you miss most about the Olympics?