If you haven't heard of Nuun before now, this might be the first running blog you've ever read. This stuff is everywhere you look on the interwebs! Nuun (pronounced like the noon hour of the day, not like the lady in a habit) is a tube of tablets that you can pop into your water bottle, and the tablets then fizz out electrolytes into your water. No shaking required. The past few weeks I've been testing Nuun out to see if it stacks up to its fanfare. 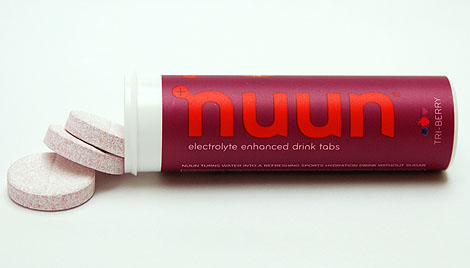 So why are people so over the moon about Nuun (oh, the rhymes)? They were the first company that separated electrolyte replacement from carb replacement.

Nuun has electrolytes like you would get in your old pal Gatorade without all the sugars. It does better than less sugar -- it has no sugar. To get the slightly sweet flavor, Nuun's active hydration tablets include sorbitol, a sugar alcohol which is also found naturally in some fruits, and acesulfame potassium, an artificial sweetener. See the label below for the ingredients included in one tablet.

Another reason that Nuun is so popular is that it is really convenient. The tube comes with 12 tablets that each can be added to 16 ounces of water. They make the tablets so that you can easily half them if you only want 8 ounces.

Over the period of testing, I kept two tubes in my gym bag with barely any added weight and zero inconvenience. I also carried a water bottle that I could fill up once I was at the gym. After you fill up your water bottle, you just drop (the tablet into the water) and go. Below is some Nuun working its fizzy magic in my water bottle. 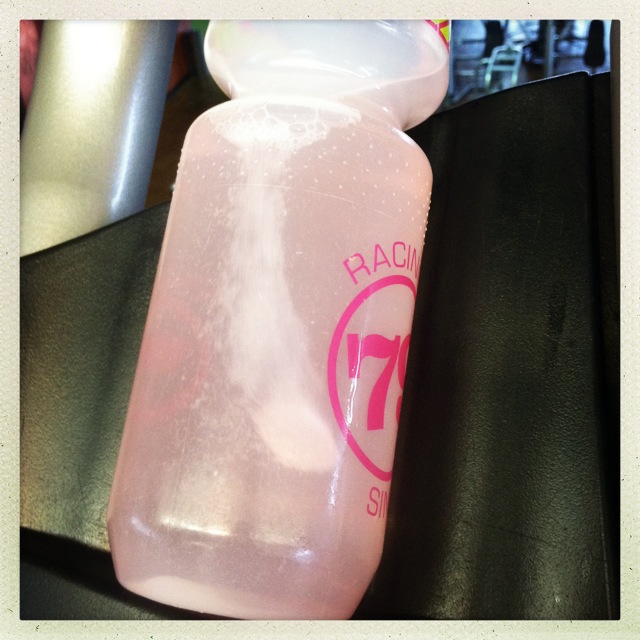 I always opened the water bottle spout when I was letting the Nuun fizz because I was nervous about pressure building up in the bottle. Has anyone ever had a Nuun explosion in their water bottle? I just assumed it would happen but didn't actually want to test that out.

And this is where I was thrown off at first. Because everyone adores Nuun, I assumed that I would love it at first sip. Not so much. I tried Lemon Lime first, and I gagged a little. Not the reaction you want to have when you are testing something that you hope will be awesome. It tasted more alka-seltzery than heavenly. But like a lot of things that gagged me at first try (chia seeds and GU, anyone?), I started to get used to the flavor. Tri-berry was not gaggy at first sip, but maybe by then I was already used to the fizzy, electrolyte-ness of it from trying Lemon+Lime first. But after a couple of bottles of each flavor, I actually started to enjoy the fresh fizz (which goes away if you wait a long time before drinking it) and light flavors.

They have tons of flavors to try, but of the two I tested, Tri-Berry was my favorite.

Nuun is for you if you don't want to get your calories and sugars from a drink but you want to make sure you are replacing the electrolytes your body uses during your sweaty workout sessions. It has less than 8 calories per tablet and no sugars.

I liked using it during my shorter weekday runs, where I'd still like to replace some electrolytes lost but without adding extra calories that I don't need for my workout.

Also, it would be great to use if you prefer not to use Gatorade, GUs, Honey Stingers or Shot Bloks on your long runs. So if you're into fueling with Sour Patch Kids or PB&Js, this would be an excellent means of rounding out your electrolyte intake without eating electrolyte-enhanced foods.

It is comparable to GU Brew, which uses sorbitol, fructose and stevia leaf extract for sweeteners and has 10 calories per serving. Nuun is less expensive at $6/12-tablet tube versus GU's $6.50/12-tablet tube. Also, if you purchase eight tubes or more, Nuun's price goes down to $5.50/tube. 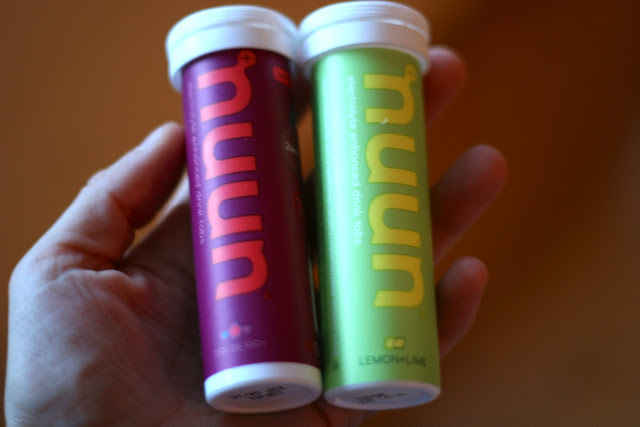 Would you like to try some Nuun or (more likely) add to your Nuun stash? Nuun sent me an extra tube of Tri-Berry and Lemon+Lime so I could share them with one of you awesome readers.

In the comments of this post, tell me why you need some Nuun right now.

Nuun sent me two tubes of Nuun to try and two tubes to share with Yo Momma readers. I received no payment for my review, and as always the thoughts and opinions are all my own.
Posted by Unknown at 4:40 PM