Running in the rain

First off, The Long Run. It deserves to be capitalized because it was tough as nails, the really thick and long kind. First, we followed the wrong group after the first water stop. Who are those people who started with us at 5:30 a.m. just to veer off after a mile? So tricky. That's when planning in advance would have come in handy, but I changed my plans at about 11 p.m. the night before, which meant that the group run which was previously out was now in. So I didn't look at the map, but I made sure to be on time so that I didn't have to play catch up. Well that plan went out the window. Not only did we have to try and catch up, but we had to trek back up a hill down which we had followed the decoy long-run group. Thank goodness for my running partner and her determination to keep trucking, or I might have given up at mile one.

We finally caught up to some ladies from the group who had the route map (it changes every week) memorized. Seriously, they quoted half of the instructions (there were lots and lots and lots of turns) with no problems while I typed into my notes app. Just another reason that I'm happy that I always run with my phone. There is no way that my long-run brain, even two miles in, would have retained that information. Next time, no matter what time I decide that the run is on, I am looking at the map (on my computer because my phone won't pull up the mapping program they use, weaksauce). Seems so simple, yet I manage to keep messing that one up.

So once we were finally running in the right direction and managing a decent pace, the rain started. I thought, that's fine because it's just a slight sprinkle. And five minutes later that thought turned into, I can't see because of the giant rain drops in my eyeballs, and I'm pretty sure that was lightning that just struck right beside my foot. Later I learned that people in the group had stopped running because of the lightning. I'm glad I didn't know that I should be worried (I mean I wasn't in a swimming pool, unless you count how full of water my shoes were) because I most definitely would have used that as an excuse to cut the run short.

Still trucking along, we found another group that was hitting up the same mileage and pace we were, so we started tagging along with them. Somewhere in there we also ran some serious hill-age as the lightning buzzed past our cheeks. If soggy shoes won't tire you out, hills plus soggy shoes will. About halfway through, I knew we weren't going to make our goal pace for the day (8:57), and honestly, I was just happy to be finishing. Period. My feet were soaked and blistering, and the first two toenails on each foot felt like goners. We ended on a good note though, working hard the last mile and finishing our 18 miles in 2:46. Pretty good for a crappy day. The one bright spot was that it was not as hot as it has been. Yay for rain clouds blocking out the sun.

* Completely soaked shoes are really heavy. Take time to thoroughly complain about this to everyone who will listen. Fellow runners love that. And you might as well start splashing in puddles for fun.

* Everywhere that you never chafed before will now chafe. Cover your entire body in Body Glide, or just take a pillow into the shower with you so that you can scream into it as the water pounds the chafiness.

* Sunglasses are totally useless against rain pellets. Hats might help. The best option is to just close your eyes and follow the voice of your running partner.

* If you get thirsty, just let the rain rivers on your face drip into your mouth. CamelBaks not needed.

And in the not-running sphere, we celebrated the first day of school today. In honor of the occasion, we finally cut the shag. 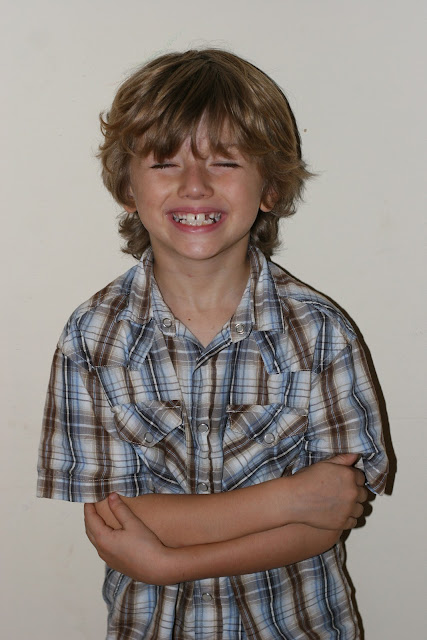 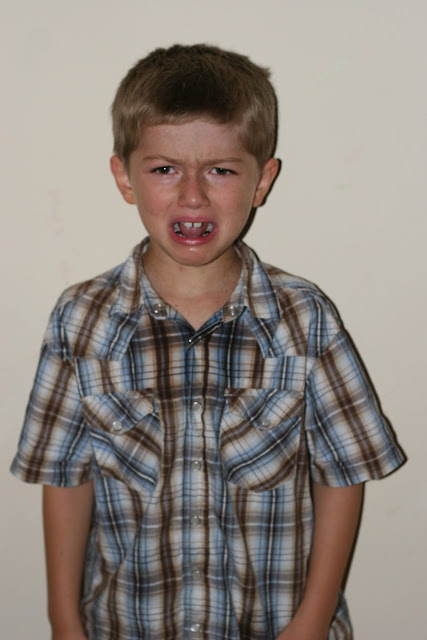 He was really not happy about all the hair bits getting into his mouth. He tried repeatedly spitting them out, hence the spit bib on his shirt. Because I know he would never want to forget the night before second grade started, I still made him take an after picture.

By the next morning, he had forgotten how awful it was. 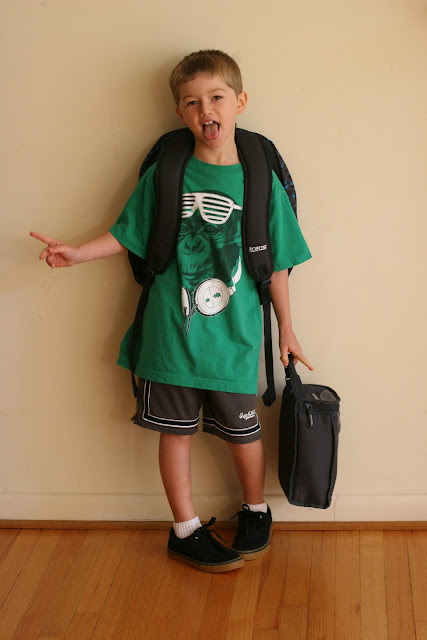 Today was my daughter's first day at a new school, so we tried our hardest to embarrass her. My hanging out the window during the crowded carpool and yelling for her to turn around so we could take her picture (all in my pajamas, no bra, and unbrushed hair) totally worked. Point for Team Mom. 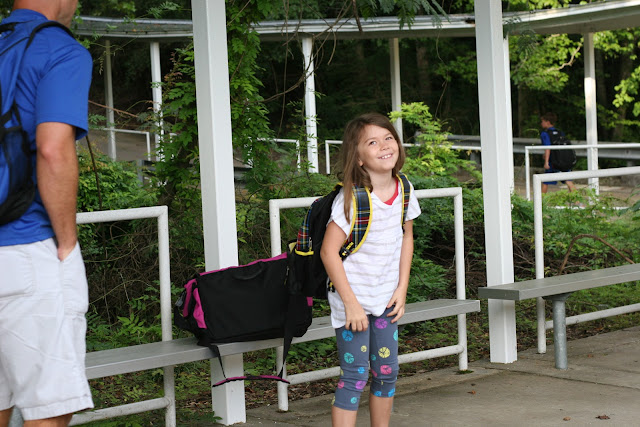 What do you do when it starts to rain during a run?

Would you go inside when lightning starts during a run?

What's your favorite way to embarrass your children or friends?
Posted by Yo Momma Runs at 5:03 PM