This race had a heck of a lot of heart.

I almost didn't run this race. It felt inconvenient to run it on a day that I needed to squeeze in my training plan's 20 miles. The course (my neighborhood) would be hilly. Another $25 on another race. The entry fees flowing from my pocket never end. 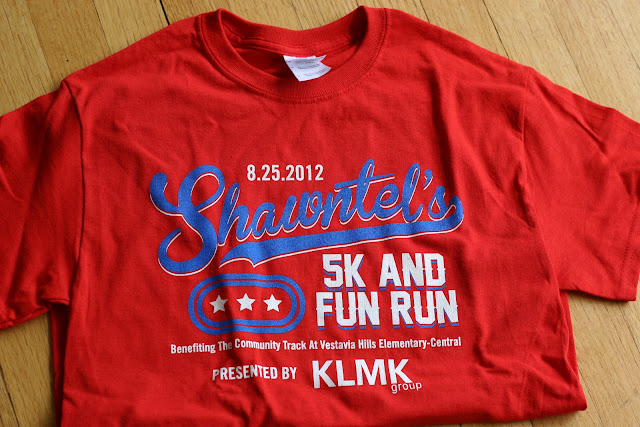 But this wasn't just another race. The race was dedicated to Shawntel Jones, an active mother from my community who passed away unexpectedly. Her friends and family wanted to do something in her honor, and when they heard that Vestavia Elementary Central (less than a mile from my house) was trying to raise $50K for a track, they joined in the cause in Shawntel's honor. I didn't know Shawntel, but she obviously knew lots of folks. And those lots of folks really loved her.

On race day, we parked at the bottom of a hill and walked straight up the most-dreaded (at least for me and running) hill in my neighborhood. At least we weren't running up that hill. My first thought on the way up was, holy horde of 12 year olds. I think a lot of them were part of the middle school cross country team, but also maybe they heard there would be granola bars at the finish. Don't 12 year olds go cray cray if they don't eat constantly? 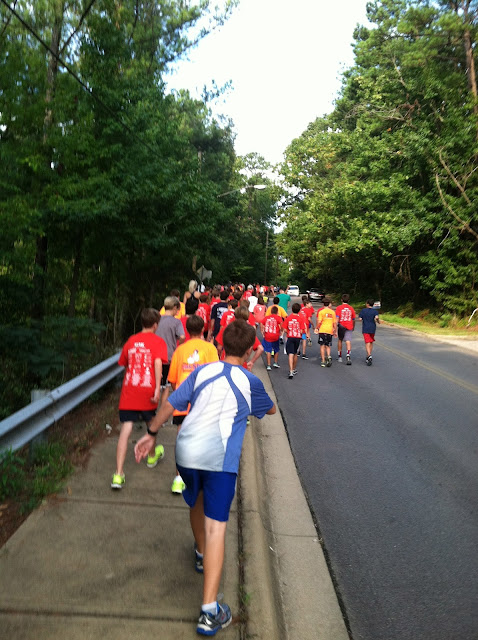 At the start line, they all crowded in to be right at the front. I tried to just get right behind them because I didn't want to get tangled in all the preteen angst. Shawntel Jones' husband took the mic for a moment to thank everyone for coming. With some tears in his voice, he told us that this event had helped him and his sons in the healing process and that instead of raising $50K for the school track, the amazing volunteers and family friends raised $80K. Wowzers, that made me proud of my community. He then said a prayer (love that part of living in the South) and joined the rest of us for the race to start.

Since I had already kicked out 10 miles earlier that morning, I knew this wouldn't be my best effort. My goal was to make the most of the downhills, don't stop for water (I drank a lot right before and right after), and just hang on until the end.

It took a little bit to weave in and out of all the middle schoolers, but we eventually all got into a groove. It was great that they completely blocked off the streets for the race, and we had zero traffic to contend with. Perfecto! The course even went right by my house, but my husband was down with the previous day's root canal so he didn't make it outside with the kids. But one of my gym running partners came out into her front yard to cheer me on. She even brought out a bottle of water for me, which was a lifesaver because I didn't want to get caught up in losing time at a water stop.

Around mile 2, I noticed that there was one particular dude who kept see-sawing with me. I would pass him, he would pass me, pass him, pass me. With about a half a mile left, I knew he was back there, so I tried to kick it in to make it to the finish line first. But I kicked too early. There was one more life-sucking hill before the finish line that I didn't mentally prepare myself for, so I pretty much gave up trying to kick as hard as I could. And random dude passed me just before the finish line. I could tell he was proud. You're welcome for your confidence boost, random dude. There were no awards or posting of times after the 5K. I hung around cheering people down the finish chute, which they had roped off on either side so that it made a little tunnel that finishers could run through and get high fives. That was a nice touch. An announcer stayed on the mic, cheering on runners and announcing their arrival, until the very last runners crossed the finish line. Then all the action moved to the 1-mile fun run around the high school track. 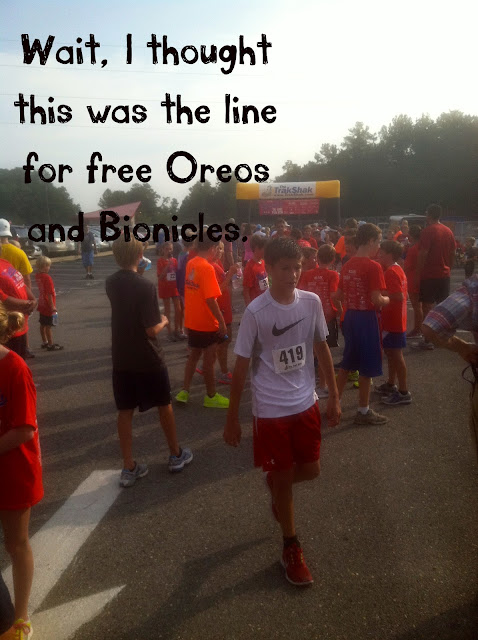 Because I had already raided the snack table, water bottles and Gatorade dispensers, I figured it was time to get a move on and finish up my last 7 miles for the day. Not nearly as fun as unlimited snacks and smiley runners.

My favorite swag was the bandage dispenser. Not kidding, I love useful stuff like that in my swag. I think we used them before we even got home from packet pickup. 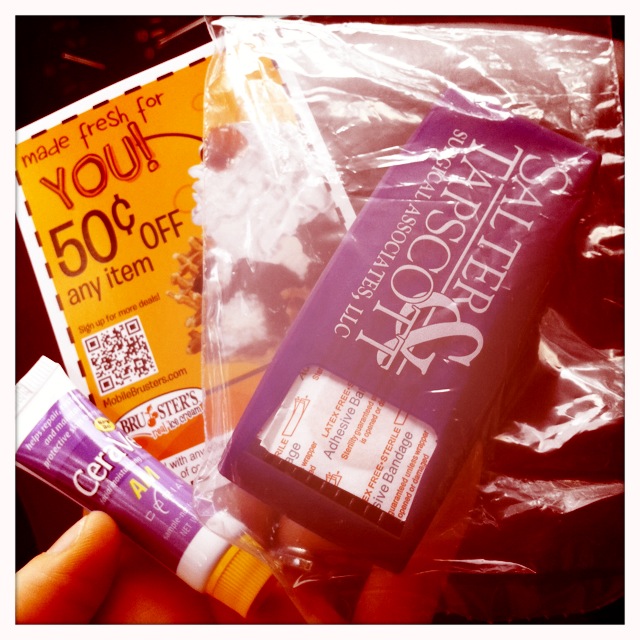 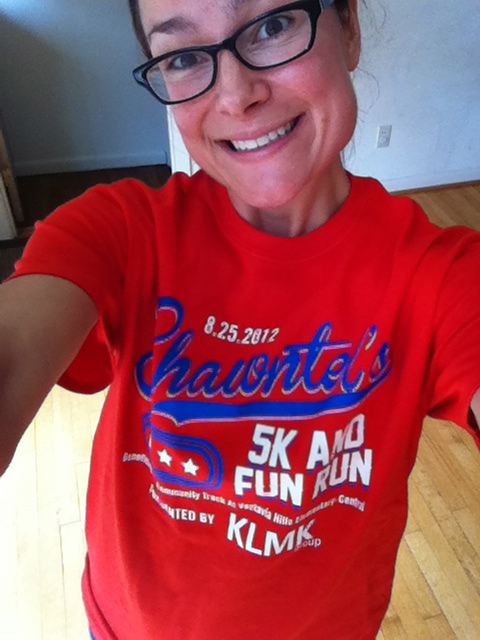 Have you ever run a race just to support a community cause? What did you run for?
Posted by Unknown at 4:38 PM