Poison ivy, I hate you. Plus some running.

Yesterday was double run day. I haven't pulled one of those in a while, but I was racing the Mommy Run Fast 5 mile virtual run in the morning and wanted to hit up Red Mountain again since yesterday was one of those rare occasions when my husband can make it home before everyone's snoozing. He's a work maniac. Plus Tuesday's are Alabama Outdoors Red Mountain runs, so there would be water and friendly people on the trails.

For the morning race, I geared up and hit the gym with the twinners. I warmed up for a mile on the track and then mosied over to the treadmill to try and work out the 5 miler. Before starting, I had looked up on McMillan how fast a 3:34 marathoner (wishful thinking) should be able to run a 5 mile race. Thanks to McMillan, my new goal was 7:17 miles. I started off slower so I could work my way up. 8.0 mph on the first mile, then 8.2 on the second, then 8.5 on the third and fourth. On the last mile, I just went crazy to see how fast I could push it. I got up all the way to 10.1 because I wanted to see if I could run the last .25 at sub-6 pace. 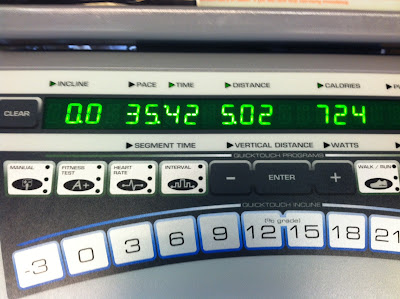 I beat my goal by 9 seconds per mile. There was no inclining or any extra work of the sort, but I did have to waste energy telling 15 people that the treadmills beside me didn't work. They are the most popular treadmills, and only one (the one I was on, obvi) out of the three worked that morning. That's the way Gold's Gym rolls. 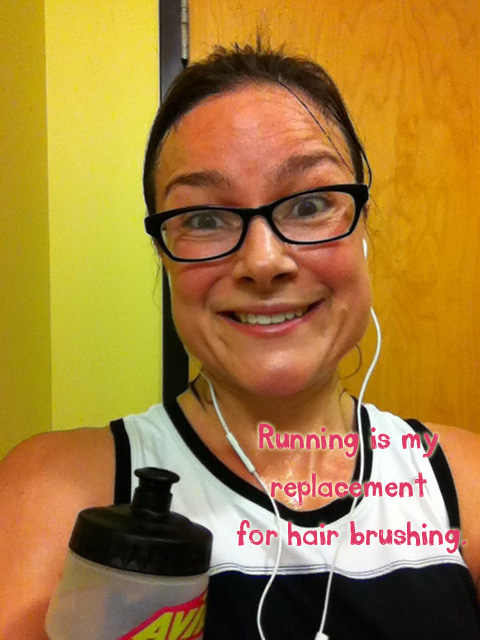 After the morning run, my left knee was kind of feeling wonky, so I knew that I was going to take it easy on the trail run. I got there just as everyone was heading onto the trails, so I decided to use that as my opportunity to truly take it slow and easy. It was really nice to just think (sans headphones) and relax on the trails.

Even though I was taking it easy, I had some great realizations out on the trail. Thinking back to the first time I ran these trails, I remember one particular hill totally kicking my butt. Yesterday, I kept thinking, OK, that hill is right up ahead so get ready. And then it never came. Then I realized that was the hill back there, but it just didn't kick my rear as much. Moral of the story: slowly, slowly over time, there is progress with this running business.

Unfortunately, I had another realization when I woke up this morning: poison ivy. Is it possible to contract a poison ivy allergy? I swear that I have never been allergic to poison ivy my whole life, but since we moved to Alabama, my daughter and husband have been getting it like crazy whenever they look at it. My husband has always been allergic, but I guess we never lived in a place (since we've been married) with lots of it surrounding our house. So (even though I grew up surrounded by poison ivy) suddenly I am allergic to poison ivy too. Dumb. I swear the same thing happened with car sickness. I never got car sick before I got married, but my husband has it always. Now I get car sick. Impossible to contract, but somehow I did. 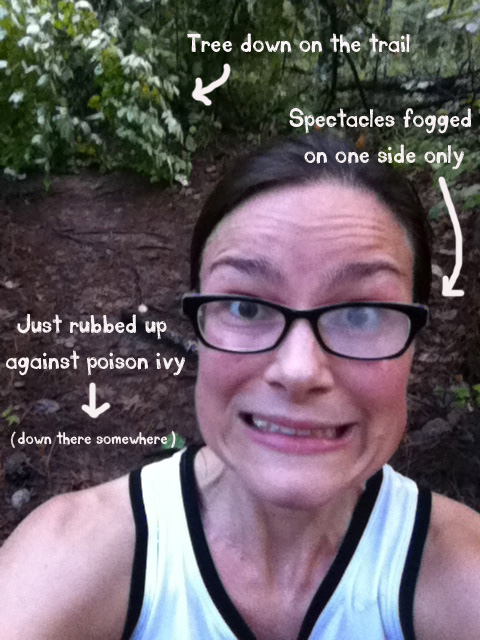 Because the trails still had lots of puddles and some trees down, I probably spent more time in the brush to the side of the trail, which is probably where I rubbed up against the poison ivy. This is my best guess. So don't stray from the trails if you are running Red Mountain and are allergic to poison ivy. Winter, you cannot come fast enough to kill all of these mosquitoes and rash-giving plants.

Last, here's a little motivation to eat more iron-rich foods, from Shape magazine (an old issue that I just found in a disorganized mail stack). You run faster when your body has enough iron! I also started taking a multivitamin after I figured out that I was iron deficient earlier this year. 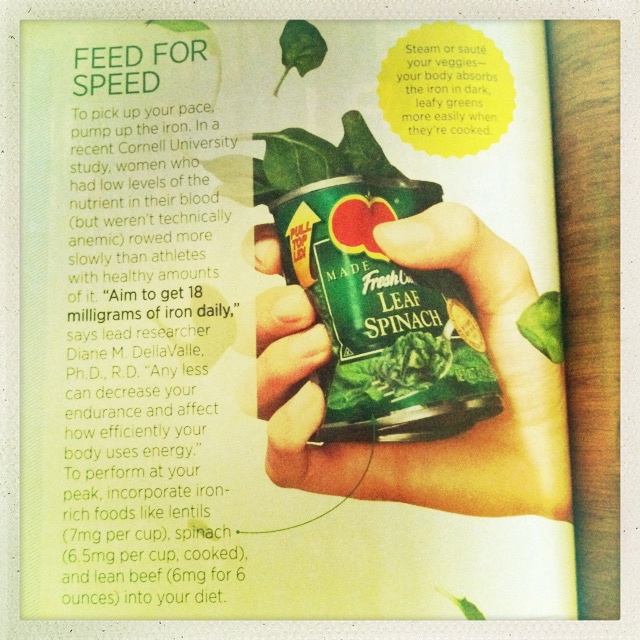 What do you eat to make sure you get enough iron in your diet?

Have you ever gotten poison ivy on a trail run? Are you allergic to it?

Do you have any virtual races coming up? I like to do them as replacement for my speed work.
Posted by Unknown at 5:01 PM