A long run, an ultra, and a pantsless Roman

Thursday: rest day + one hour of myofascial release at the physical therapist's office 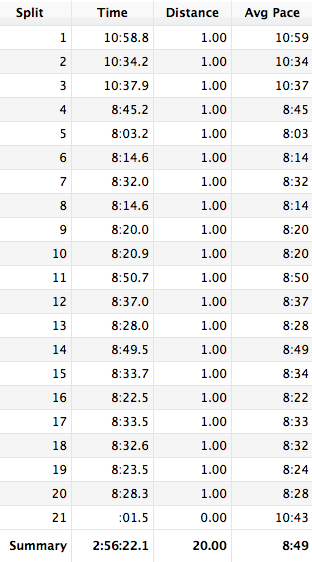 Well, recovering from last week's half marathon was tougher than I anticipated. I swear that I even felt it in this week's Saturday long run. For those of you who are counting, that's seven days later. Part of that is probably because I squeezed in my tempo run the day before the long run, but either way, almost every run (with the exception of Friday) felt really hard this week.

So I've officially decided that at my upcoming Go Commando race, I'll be taking it easy (i.e. not racing). It's a great race to relax and run because Clarksville, TN, is so gorgeous, and fingers crossed that the leaves will be changing colors like they were last year. And you know what slower running and a gorgeous city mean, right? More sketchy cell phone pictures for the blog. I'm so happy.

I missed my running partner on Saturday, but luckily we have the best track club on the planet with lots of cool people making it happen every Saturday. Since this is the only town in which I've ever tried distance running, I'm not sure if this happens in other cities. So I'll tell you what happens every week, and you tell me if you have a similar version in your town. For our long runs, one awesome track club volunteer plans a new route for every Saturday morning, and she plans a shorter and longer version based on upcoming races. This week's distances were 9 and 15 miles. Then she coordinates water stops every two or three miles along the route, and participating runners volunteer (usually two per water stop) to drop a cooler at the stop before the run. So we can run 15 miles and never have to carry a drop of water or worry about dehydration, and we never get bored because there is a new route every week. This week there were at least 30+ people there, so you just fall in with people who are running about the same speed and distance as you. When I discovered that they were doing this every week (thanks to a very helpful local runner who told me about it), I felt like I had just landed on a new planet of awesomeness. If only I had known about it during last summer's training slogfest. There were some ugly, ugly long run days last summer.

So do you have a version of this in your town?

1. Thanks to all of you for helping to clarify my Boston qualifying question. So the answer is, yes, from here on out, I can qualify for 2013 (if by some miracle there are still slots open in November) or 2014 Boston Marathon with a 3:40, giving me five more minutes than I thought I had. Pretty much I shared this info with every runner I looked at this week, and one person realized that she now has ten more minutes than she thought. So it's like a (fancy gold) chain of knowledge that keeps moving along the path to Boston.

2. To celebrate those extra five minutes, I committed to racing the Cheaha 50K in February. Next on the agenda, learn how to pronounce the name of the race. Chee-ha or Chee-a-ha? Locals, your input is welcomed here.

The elevation chart for this race looks something like this: 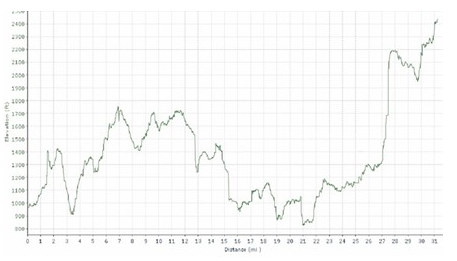 Back to my post-run Saturday.

We stocked up on some Costco grub. Remind me never to go there again on a weekend. Too many people, which equals too much competition for the free samples. 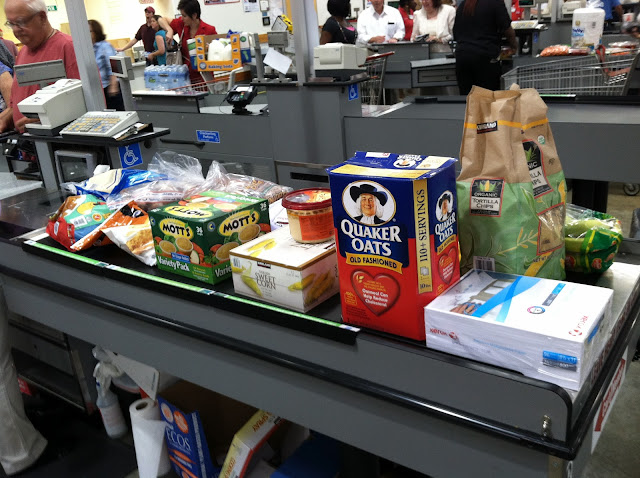 Then we took advantage of free tickets to the museum for Museum Day Live. If you didn't hear about it this year, mark your calendars for next year. It was super easy to get the tickets via email, and we were able to get in free to a museum that, for some insane reason (you'll find out why in a second), I had been really wanting to visit, the Vulcan.

The Vulcan is one of my favorite spots in Birmingham. I love how the giant statue stands protectively over the city, especially when he's all lit up at night in his Roman god-iness. And he wears no underpants, just an apron to protect his vital parts from fire and forge (because that's what he's the god of).

Turns out that the museum portion of the site is pretty informative. I had zero idea that he was first created for World's Fair. And zero idea that people baulked at the idea of making him a permanent fixture in our community because of the no underpants thing. 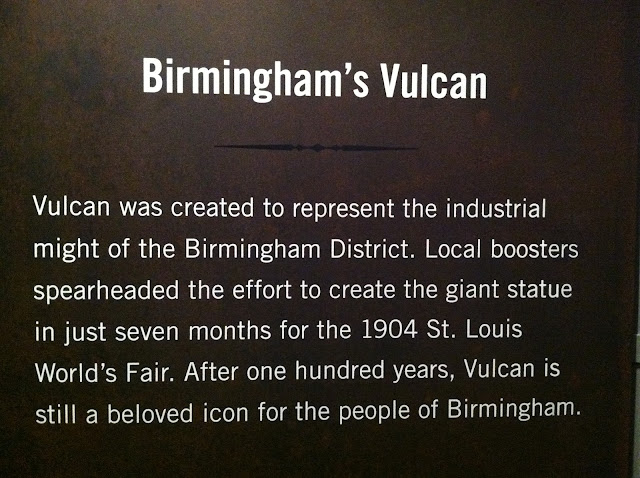 Those same people, if we Back to the Future-ed them to 2012, would hate visiting our house, where these two regularly streak the halls sans pants. Pants are so 2011. 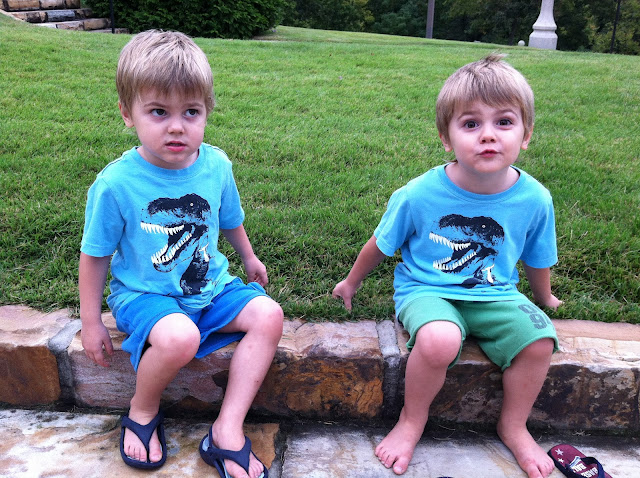 The tour also helped us figure out that our daughter is the size of the Vulcan's toe. And that's been a burning question of mine for about two seconds. 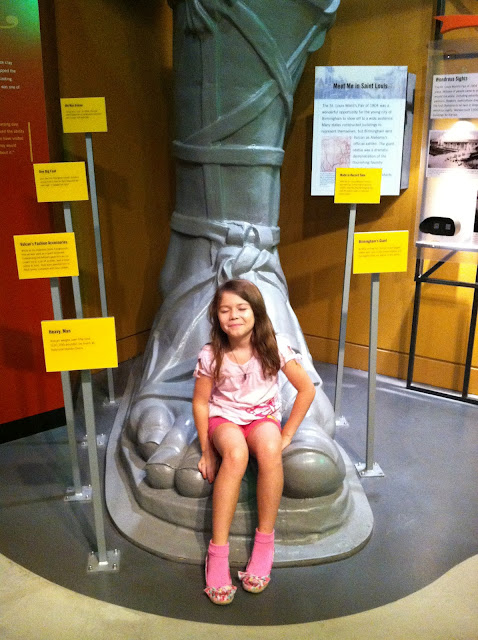 After saturating our brains with Birmingham history, we headed up to the second part of the museum package which is a trip to the top of the statue. My older kids wanted to walk up the stairs instead of taking the elevator, and for some reason that sounded really fun to me, until about three floors up. So stair climbing directly after running 20 miles is the worst idea ever invented. Unless you plan on taking a nap at the landing between every floor. 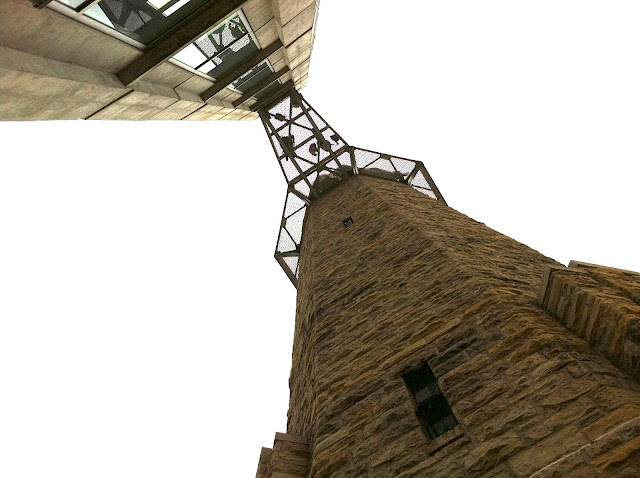 Once we got there my family was scampering around, all free-like. 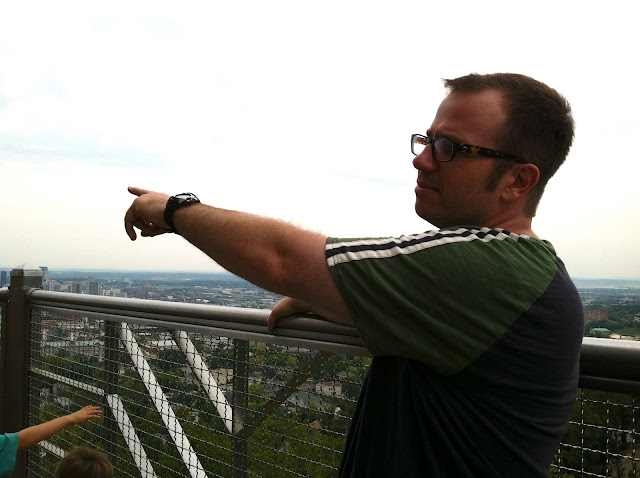 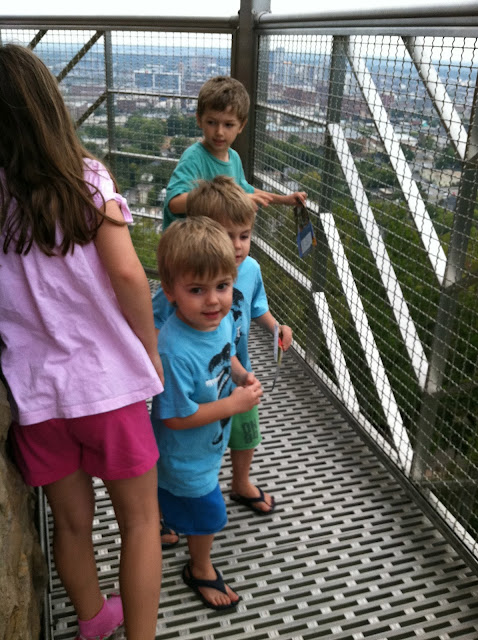 No one even seemed to be bothered by the fact that you could look straight down to the ground, the very-far-down-there ground. 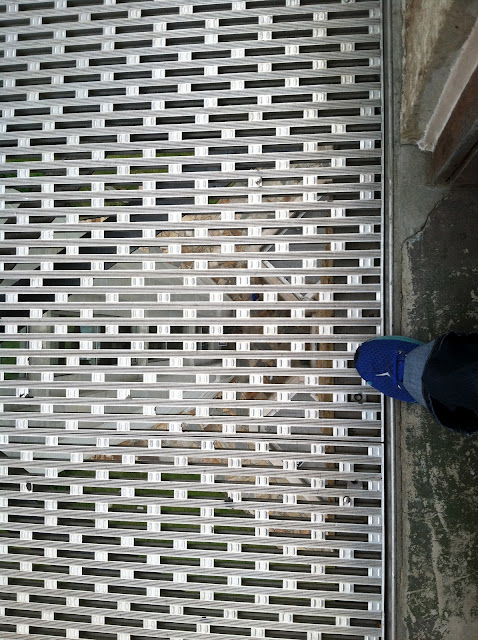 This is not a staged picture. This place was really making me a nervous wreck. Every time someone moved I wanted to staple gun them to the rail. In my mind, I screamed at everyone who made a sudden, or non-sudden, move. How could people be so comfortable frolicking along that see-through walkway a billion miles from solid ground? So I guess this takes the high wire off my list of possible career paths. 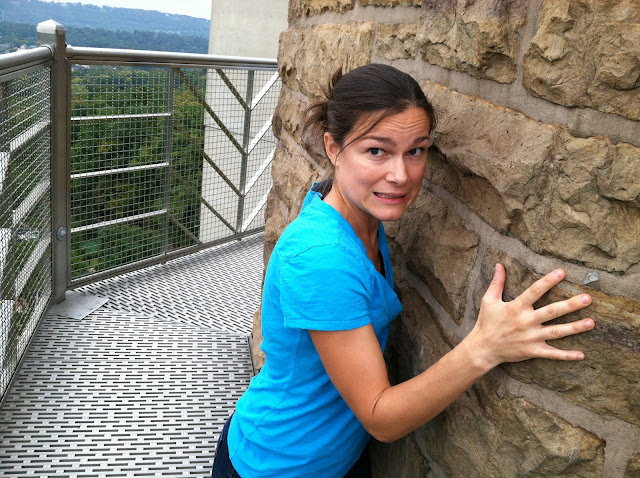 But while I was clinging to the wall for my dear life, I did get a closer look at the Vulcan's hind parts. 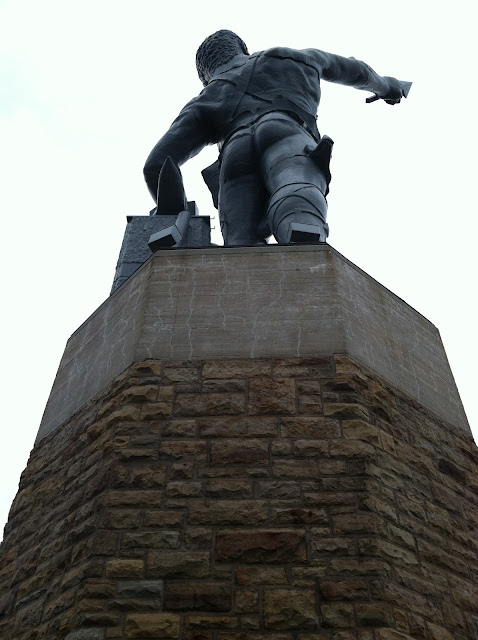 So if you aren't afraid of heights and wimpy like me, you'd probably love skipping around at the top of the Vulcan like the rest of my family. But I feel super happy checking out his rear from the solid ground.

What's your favorite museum ever and/or in your town?

Do heights scare you? If not, what else does?

Have you ever run an ultra? No! Cheaha 50K will be my first one.