Icing and a half marathon playlist

The injured foot is hanging in there. I was supposed to run 12 tempo-run miles yesterday, but I decided to split it between today and tomorrow. After about 5 miles on the treadmill yesterday, I had some soreness, so I slowed it down, which decreased soreness, for the last mile.

Because I didn't get my run in until after 5 p.m., I had to come home and multitask my icing. 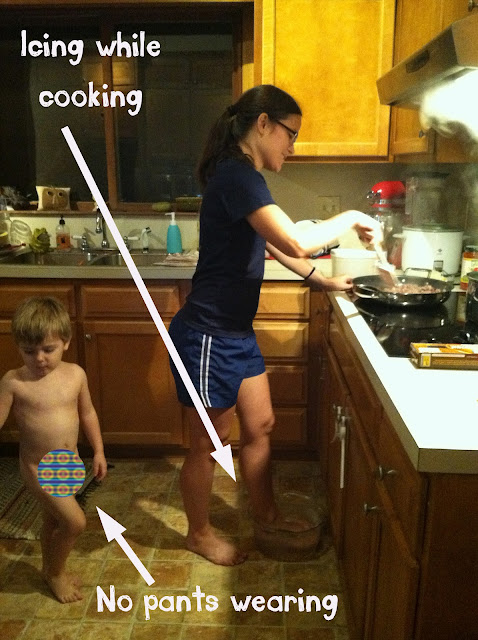 And as I've told you before, the twins refuse to wear pants at home. But at least they poop in the toilet, so the whole no-pants thing is excused. Unless we have company.

Also, my physical therapist explained to me yesterday why icing helps injuries. This is all from my memory, which is quite shoddy, but I liked what I can remember of her explanation. She said that while icing restricts the flow of blood, when you stop icing, your body sends in a fresh rush of blood to the injured area, which promotes healing. I'm sure this is old news to all of you, but I thought icing was mostly to prevent swelling and never considered the tidbit about a fresh blood supply coming in after icing. I know there are some arguments against icing, but I still love it.

Moving on. Here is my playlist from the Nashville half. Song no. 38 didn't fit on the original screen shot, so it's dangling solo down there. But I love that song too much to leave it off the list. 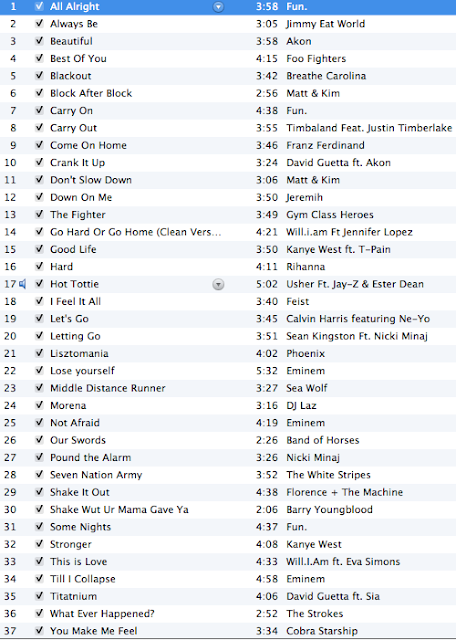 There's a lot of booty music in there (Down On Me

). Booty music is the term I use to describe all music that pretty much focuses on singing about girls' butts. Part of me hates booty music because it's demeaning to women, but the runner part of me loves it for running. So it makes the list.

-- which is my new love song to running. Do you ever dedicate regular love songs to running? This one isn't very romantic, so it was easy to put running in Yo Husband's place.
3. The Fighter

-- this one is still on my mind after the Olympics. Do you remember hearing it when you watched the Olympics? And I freaking loved the Olympics, so this one was a playlist shoo-in.
4. T.H.E (The Hardest Ever)

-- which is listed as "Go Hard or Go Home" up there on the original playlist. J-Lo on repeat is somehow very motivating when I am trying to run faster.
5. Best Of You

-- even though this one's a little depressing if you actually pay attention to the lyrics. I just liked the rocking-ness of it.

Do you ice? What do you multitask with icing?