If you don't read past this paragraph, you have to know that trail runners are the nicest people on the planet. Of the twenty falls I had at this weekend's trail race, someone helped me up or made sure I was OK to keep running EVERY SINGLE TIME. Most times multiple people made sure I was doing fine. I feel like if I fell that much in a road race, which I thankfully don't, people might just hurdle over me.

It reminds me of the time I was pregnant with my first son and shopping at Wal-mart, which is the most disgusting smelling place that exists when you are a pregnant woman in your first trimester. We were just picking out some canned tomatoes for a recipe when I felt my gag reflex kicking in, and there was no stopping it. I had just enough time to pick up a cardboard box and half vomit it in and half vomit on the floor. So what did the customers surrounding us do? Not a single person asked if I was OK. Most people looked the other way, and several openly annoyed people rolled their eyes and tried to reach around me to get their canned goods.

Then I sent my husband to tell the janitor that "someone" threw up on aisle 4.

So the Wal-mart reaction is what I would expect during a road race. It's not that I think road racers are inherently not as nice, but I think the environment of the road race influences people to be more introverted during race time. I know when I race the roads I'm mainly focused on speed and the music in my headphones, two things that I don't have in trail racing. So take those things away, add amazing views and more technical terrain, and you somehow get really nice people. I'm still working on the equation, but I know that the answer is Trail Runners are Superty Duperty Nice every time.

Wait, this is supposed to be a race report, so I should probably talk about the actual race at some point.

The Oak Mountain State Park 21K is part of an XTERRA series of races in Alabama. This race is also partnered with Dirty Spokes, so there was a duathlon on the same day as our race. There was also a 5K and 10K option for the trail racers. The cost was $35 for the 21K.

Swag: I love that the trail races I've done don't start with an expo the day before the race. It's perfect to be able to walk up on race morning and grab your bib with no hassle. I also like that trail races are moving towards less waste in racing. So instead of giving you a swag bag filled with a bunch of paper that goes immediately to the recycle bin, they hand you a shirt, some Power Bar gels, and your race bib. 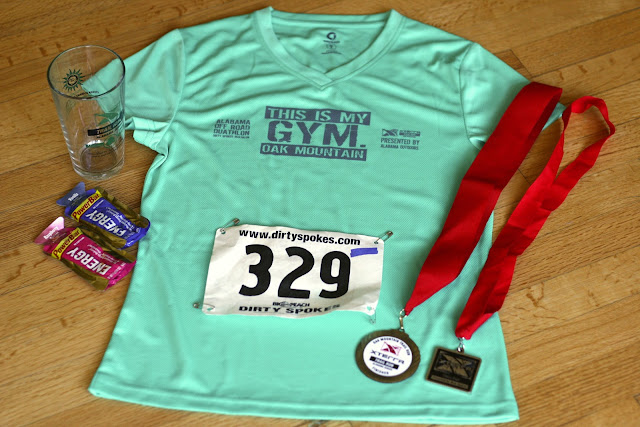 The shirts are dri-fit and gender specific, and I loved the slogan. Although I wish the Oak Mountain gym had daycare.

Race finishers got the round medal and the XTERRA/Dirty Spokes glass, and the square medal is for winning second place in my age group.

Travel: Getting to Oak Mountain from my house is extremely easy with zero traffic issues. On race day, there were also no car back-ups at the front entrance (which I have encountered at other times). Entry into the park is $3 per person.

Race day: Before the race, I went to the Alabama Outdoors tent to meet some other AO teammates. Below is Mary who is also on the AO team with her husband Michael. They are definitely in the Trail Runners are Superty Duperty Nice category.


While we were hanging out, I heard several announcements about which color of plates/disks each distance should follow for the race. For the 21K, we had to follow the blue plates. And they were literally plates. For some reason I pictured something less July-4th-picnic-esque and more official, but they got the job done.

They also announced that the 21K would start five minutes early at 8:25. That was fine with me, but I hope all the runners made it in time. Even though we had a chip, it was for the finish line, not the start.

I think the guy with the beard in the pic below is the one who wore the Born to Run sandals for the race. If it wasn't him, some other cooler-than-I-will-ever-be person wore them, and he passed me, looking light as a feather, on a hill that was killing me. 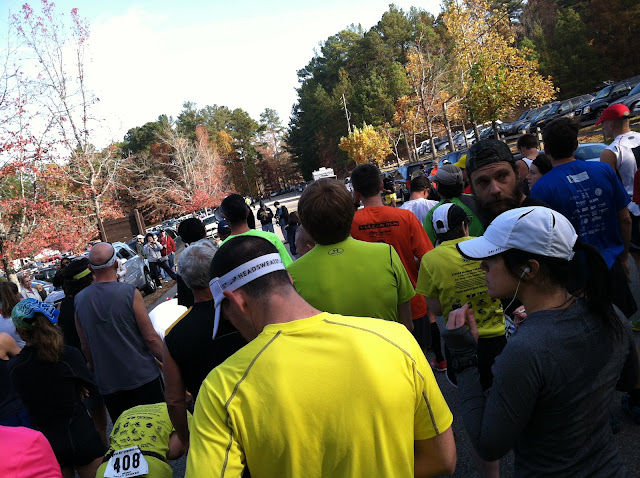 Race course: The course started on a downhill stretch of pavement, which helped everyone get a fast start. After that, we quickly hit the single track trails. The first half of the race was flat and not extremely technical, but there was a lot of leaf coverage on the trails which made navigating an easy trail somewhat trickier.

The second half of the course was packed with more difficult (read: rockier) terrain and elevation. My Garmin read that we gained 1,670 feet during the race.

There were about five or six water stops along the course. I carried my own water, so I only stopped to refill at one of the later water stops.

The best part of this race was that navigation was so simple. One of my fears of trail racing is getting lost. This race had plenty of blue plates to tell us we were headed in the right direction. Sometimes the plates were hanging just to let us know we were on  the right track. Sometimes they had arrows to point out a turn, and sometimes they told us the distance.

Wait, no, the really best part of the race was the time when I was separated from other runners in the quiet forest while the wind blew leaves all around me, like a leafy snow globe. To be caught in the middle of that moment was the best part of this race.

My race: I feel like for me to call it a race is a stretch. I raced the first four miles, but I felt a sharp pain in my right ankle around mile 4. After that, I decided that I would run slower to try and avoid hurting anything long term. Every time my ankle would roll inward (like coming off any rock or root), I would feel a sharp pain.

It was especially acute on the rocky, downhill stretch around mile 11. Surprisingly, it never hurt at all after the race, which I consider very fortunate. I don't know if it would have hurt worse if I had pushed it harder on the course, but I'm super happy that I had no pain after the race.

Here are the Garmin splits. The reception was spotty on parts of the course, so it's about a mile short. And I didn't turn it off for five extra minutes at the end, but you still get the general idea -- I went out fast and ran/hiked really slowly over the hills at the end. 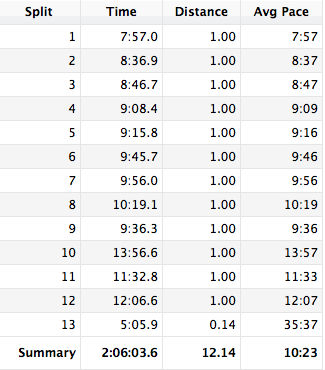 For fuel, I only drank water throughout the race and then ate a pack of Honey Stingers at about mile 7.

My heart rate averaged 121 for the race, so I basically was not putting forth a ton of heart effort. But my perceived exertion was much higher than my heart rate gives me credit for. 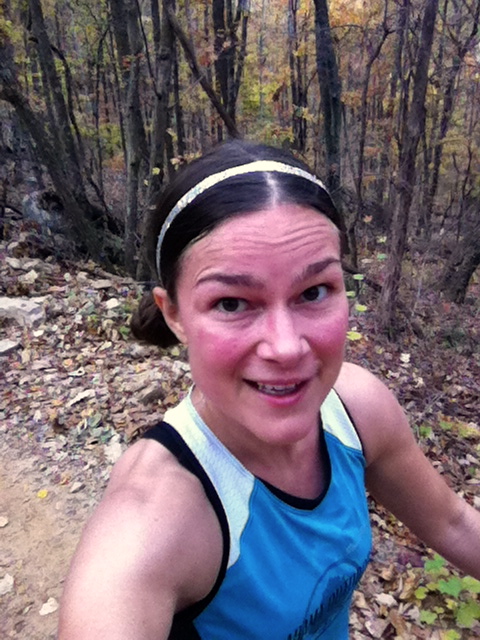 I was hiking up this hill at the time. 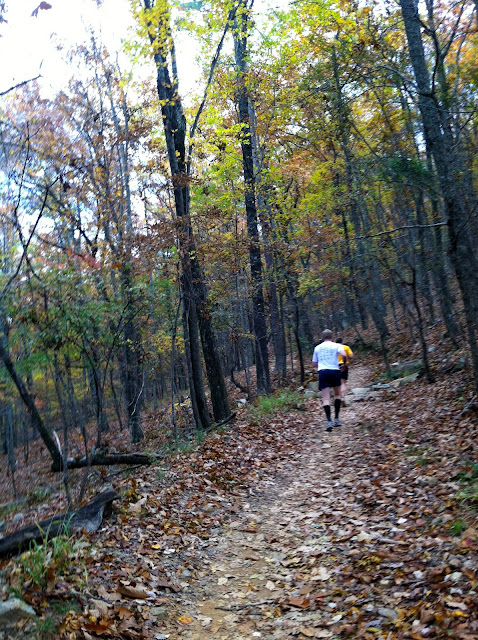 Brian, who I met at my last trail race at Oak Mountain, caught up with me somewhere around those crazy hills, and I was super thankful to have someone to talk to for a bit. We stuck together the last few miles of the race. I'm really hoping that I can find someone to stick with during the Cheaha 50K. Still trying to talk my brother-in-law into running it with me. Having someone in misery beside you makes the time go faster, and it makes me feel safer in case one of my many falls actually turns into something worse than a scraped knee.

Here's the result of one of my first falls of this race. The falls are strangely part of what I also love about trails. Physically post-trail-running aches feel very similar to post-soccer aches. Sore obliques, bruised knees, lots of dirt in my knee-high socks, and even a shoulder bruise. Pretty much exactly the same as soccer. Love. 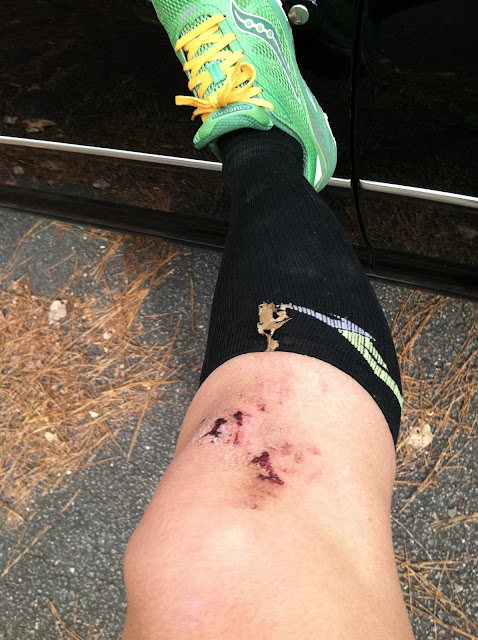 As I got to mile 12, I told myself I was going to kick it in high gear for the last mile. Then we came to a wall of earth. It wasn't very high, but it went straight up. My glutes burned just walking it.

Originally I wanted to get under two hours for this race, but I'm completely fine with my results. My feet were lazy and tired from the marathon, so I was definitely falling more than normal. And with the sharp ankle pain, I ranked ankle preservation over a PR. Plus slowing down helped me enjoy the course more. Bonus.

After party: At the end of the course, they handed us our medals and glasses, and there was a snack area set up under a nearby pavilion. I have no pictures because the thought of any food was making me want to vomit, but normally I would have been all over the red beans and rice they were serving. 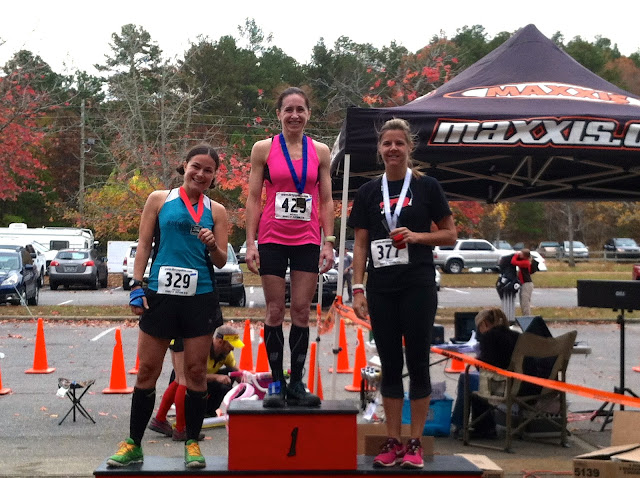 I finished the race just before 10:30, and they started the awards about 40 minutes later. Kristie, who won first place in my age group, was also at my last race at this location in May. She ran a solid race this weekend, and only missed third place overall by a few seconds. It was great to meet another mom who is trying to make time to race trails. I was running behind her in the first few miles of the race, and she is pretty amazingly strong and agile. Now I just need to work on keeping up with her!

Overall: If you're looking for a laid-back race atmosphere on a course that starts easy but gives you a solid hill challenge before the finish, this is the race for you. Also, Oak Mountain has enough trails that the course can change from race to race, keeping it fresh. The gender-specific tech shirts were a great bonus for this round. Also, the course was extremely well marked, and the race staff quickly posted results and handed out awards. I will definitely be back to the Oak Mountain races.
Posted by Unknown at 8:55 PM