Again, thanks to everyone for giving me a few days to thoroughly whine about missing my Boston qualifying time by two measly seconds. It helped that on the day of the race, my friends who were at the race encouraged me to cry about it immediately. Yes, they're awesome friends. I think that helped more than anything to just get it out of my system that day. Then writing the race report pretty much sealed the deal emotionally. I like that writing something down has a tendency to carry pain out of you and onto the paper/computer. And even though it really stunk to get so close but not quite there, there are obviously way more important things in life. So thank you, thank you for not calling me a jerk for whining about those two seconds, and now I'm ready to move forward.

Good thing because I have a trail race this weekend at Oak Mountain Park. It's my first race with team Alabama Outdoors, and I'm very excited to get some trail time in after all of the pavement pounding I've been doing. Also, I couldn't be happier that temps are cooling and the threat of poison ivy is low.

My goals for this race? Since I just came off a week-long rest, I'm going to start conservative and see how I feel. I'll bring my own water, which I didn't do at my last trail race, so I won't have to worry about hydration.

One of my main goals is to start feeling comfortable passing on the single tracks, so I might just try it a few times for fun. Part of the reason I hate passing on them is that after passing, I then feel pressure to keep up a faster pace that may not be sustainable.

As far as a time goal, last time I raced a half in this location my time was somewhere around two hours so I'd like to go sub-two. This race course could be completely different because there are so many trails out at Oak Mountain Park, so that goal isn't really a solid one.

Also, some of you asked if I have a redemption marathon planned, and I do! Before I even ran Savannah, I had signed up for Rocket City in Huntsville, AL, for December 8th. Registration fills up early for this one, so I'm glad I got in before it was closed. When I signed up, I felt like I could use it as a back-up for my BQ goal if I needed to, or I could just run it for fun. So back-up race it is.

Supposedly the course is pretty flat for Alabama, and a lot of people set personal records there, possibly because of the great temps in December. According to findmymarathon.com, a site that compares race times and courses, I should be able to run Rocket City 13 minutes faster than Savannah. I think they are basing those estimates on cooler temps. I don't really expect to run that much faster, but if I can run two seconds faster, I'll be super happy. I was really hoping to go into that race having already qualified for Boston so that I could just enjoy the course and relax that day, but I'm slowly getting my mind back in the game.

Also, I'm going to try and follow one of the pace groups, which I've never done previously. Any advice on following pacers?

As far as training goes, I'm finishing up my week of rest, and then I'll just rewind my training schedule the number of weeks I have until the race. Except this time, with a healed foot, I'll actually be able to do my speed work. Yay for the little things in life.

Here are some other little things that I love.


Also, I have an extra pair of orange shoelaces that I want to mail to one of you. 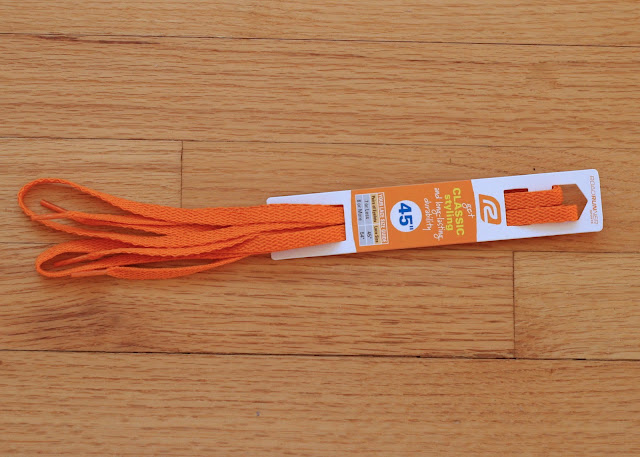 This isn't a contest or anything, just the first person to tell me they want orange shoelaces (confessing that orange is the best color on the planet is optional) will get them. Comment on this post so that people know you're claiming them, and then send me an email at yomommaruns (at) gmail.com with your shipping info.

Do you have any tips for passing during trail races? Or any other trail racing tips?

Have you ever followed a pacer during a race? How did it go?

What's a little thing that you love today?
Posted by Unknown at 9:48 AM