Let's start with the winners. If you see your name listed below, email me at yomommaruns(at)gmail.com for instructions on how to redeem your free TrailMix app. Then get shakin'!

Congrats to Elizabeth at Running for Bling, Cathryn at My Heart's Content, Sarah at Sedwick Studio, Jenn at Run It My Way, and Marla Lenox! And thank you to TrailMix for sponsoring this giveaway.

I'm also feeling like a winner this year because I made it into the Birmingham Track Club's 1200 Mile Club. You probably can't guess what the requirements are. Fine, I'll tell you. Run at least 1200 miles in a year. My total was just under 1600 for the year, so I'm solidly in the club now.

At the track club's annual party, they pass out the gear to those who qualify. The year you qualify, the BTC gives you a jacket that boldly tells that world that you are a rockstar and not afraid to painstakingly calculate and track stats to earn that rockstar-iness. Plus you get a patch for that year's accomplishment. Then every year after that, you get to add another patch to the jacket.


And, yes, of course I immediately put that jacket on over my other jacket. Represent.


Once you're in the club, you're eligible to buy more 1200 Mile Club shirts. Do not, I repeat, do not try to buy these before you are officially in the club because you will be shut down. They're not just handing these out like lollipops at the bank. I tried to buy one back in the summer when I was fairly sure I would make the mileage. Uh no, I got shut down on that big time. So once I joined I was excited to FINALLY get to buy that shirt I was craving like a pregnant lady and a corn dog (just me on that one ... moving on then). 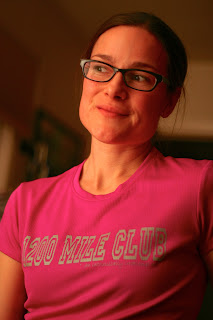 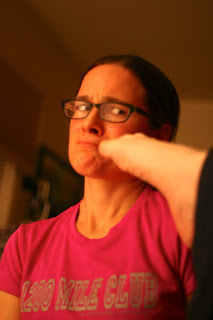 Where did that foot come from in the middle of my serious-look-into-the-distance photo shoot? The photographers around my house are all in time out for not taking their job seriously enough.

One of the side benefits of loving to run and train for long-distance races is that you get plenty of mileage. My original aim was not to earn club status, but once I realized that my training would take me  to that level anyway, I was totally in.

Any Marathon Maniacs out there? My next unintentional goal is to join you in the club.

Do you know how many miles you ran last year? No, this was the first year I've totaled the miles for the year. Is it just me, or do you instantly see 1200 and divide it into the number of shoes you would need to run that many miles?

What running clubs are you a part of?