This morning I took to the streets before the first dash of light hit the streets. Usually my husband takes the morning gym slot, but my niece is visiting us (see the tallest happy-faced kiddo below) and going to an early-morning scripture study with other kids her age from 6 to 6:45 every weekday while she is here.

She only has a permit for driving, so guess who gets to drive her to her early class: me! That means one more opportunity to run outside every day while she's in class. So far I'm one for one: one nap in the car and one run. I think I'll go with nap tomorrow because it's a cross training day. Plus it's been raining since I can remember with no sign of giving it a rest.

Another new adventure I'm experimenting with is creating a Yo Momma Runs logo. Pretty much my main idea is to bribe my kids to draw me a logo. I told them we were having a $5 logo contest. Whoever draws the winning logo gets a sandwich. It's just called the $5 logo contest -- that's not the prize. Naming of the contest was inspired by this Portlandia episode and the 6.5% loan.

So here's what my daughter came up with. A lot of running sumo wrestlers, a princess, a fish, and two ghosty goblins. See any logo potential in there? I'm thinking goblin with motion streaks behind their cape. 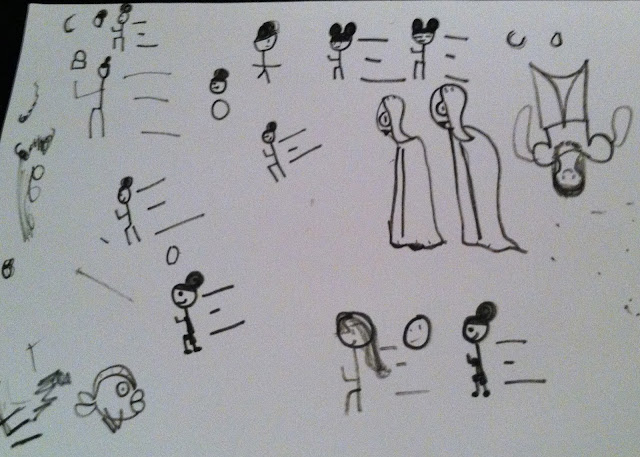 Something else I was trying to figure out this week: how to eat spaghetti without eating processed foods or gluten. Enter the spaghetti squash. I roasted up a whole one and stored the leftovers in the fridge so I can eat this at least a few more times. For the sauce, I just threw red onions in a pan with olive oil to brown, then added cherry tomatoes. Once the tomatoes got hot, I popped them so that their juice would flavor all of the other ingredients. Then I added spinach, mushrooms, oregano and sea salt. 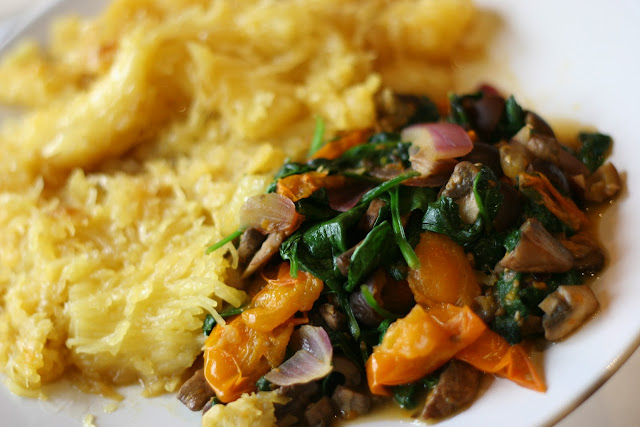 The tomatoes and oregano gave it the red sauce vibe that I wanted to recreate, and the squash gave me the pasta texture (sort of) that I was craving. But together it was so much better than any pasta dish, and I didn't need a nap 10 minutes later.

The most fun I've had with my new eating plan (New Year New Rules) is just throwing fresh veggies in a pan together without a recipe and seeing how the simple, real flavors of food combine to make something amazing.

I just got a message tonight that Prescribe Nutrition, who hosts New Year New Rules, is going to host a second session of this two-week program. If you're interested, you can get 20% off with the code NYNR20. Go here to register. Going into this program, I definitely underestimated the impact it would have on me. My energy levels are soaring. I've lost a few pounds, and I'm seeing food in a whole new light. Food is becoming more real to me, instead of something you add water to from the box.

And on that note, let's see who is going to win some handy organic snacks for their family from Happy Family. 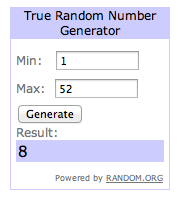 Congrats, Hiker Mom! Email me your shipping address to yomommaruns at gmail.com so we can get those right out to you.

Do you run in the dark? What safety gear do you wear? I wore a neon shirt, white hat, and flashing light on my belt during today's run. But so many things I own are black, which feels so dangerous to wear in the dark.

Which logo would you pick? My son didn't enter the contest so no matter what my daughter gets her sandwich.

When was the last time you ran in the rain? How did you cope? This morning, but it was a light sprinkle. The hat helped keep the water out of my eyes, and I tried to avoid puddles so that my feet would stay drier.
Posted by Yo Momma Runs at 1:17 AM