While the Monte Sano 15K was supposed to be a trail run, the rain that began before the race, and has barely stopped for a breather since, made it more of a mud run. The day started and stayed misty and foggy, but the mist and fog blocked the sun to give us some cooler weather than we've had lately. To be honest, even though it was harder and my quads were telling me about it the next day, the mud made this race even more fun.

Getting there: This race is at Monte Sano State Park, which is in Huntsville, AL. The mountains there reach over 1600 ft. in elevation, which seemed impossible to me since Huntsville itself is pretty flat. We woke up early and met at 5:15 to get up to the park in time for the 7-8 a.m. check-in time. Sure enough, at the very end of our drive, the road started to steadily climb until we reached the race start.
Although the race had sold out, and I was worried about crowded parking, there seemed to be plenty of spots. I noticed that a lot of people, like us, had carpooled. So maybe that helped the parking situation.

Pre-race: Check-in was fast and efficient. We grabbed our bibs and shirts along with a glass filled with some PowerBar gel and gummies. Because it was so fast, we had plenty of time to attempt to stay dry before the race. 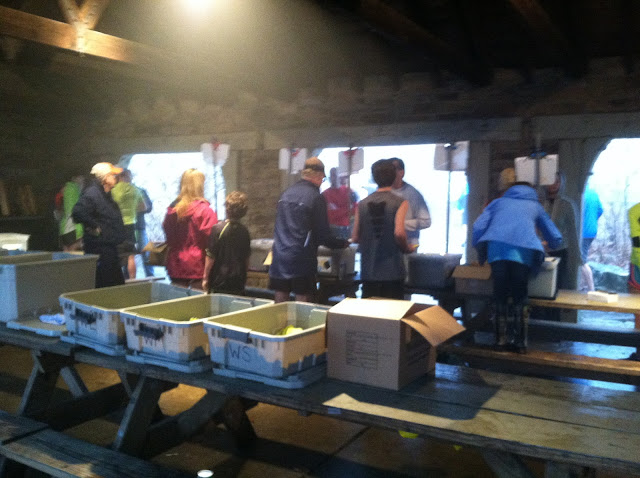 Between the pavilion, tents, and our car, we managed to stay out of the rain. It wasn't heavy, but there was a constant drizzle that could have proved annoying if you had to stand still in it for an hour. 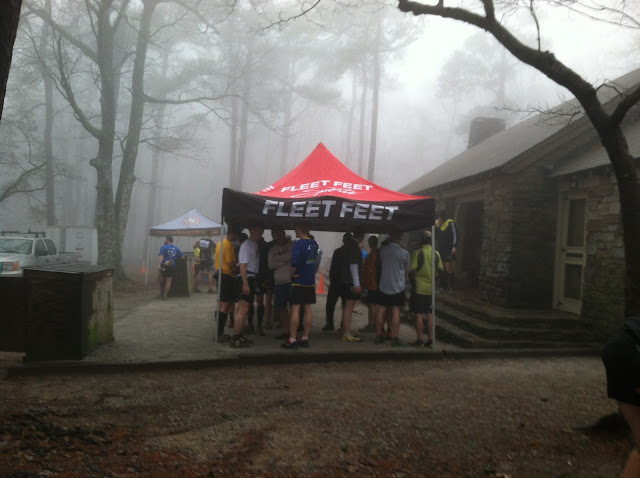 I felt lucky when a local girl told me that there was a women's restroom right around the corner from the port-o-potties, and there was no line, at least until word spread about it. 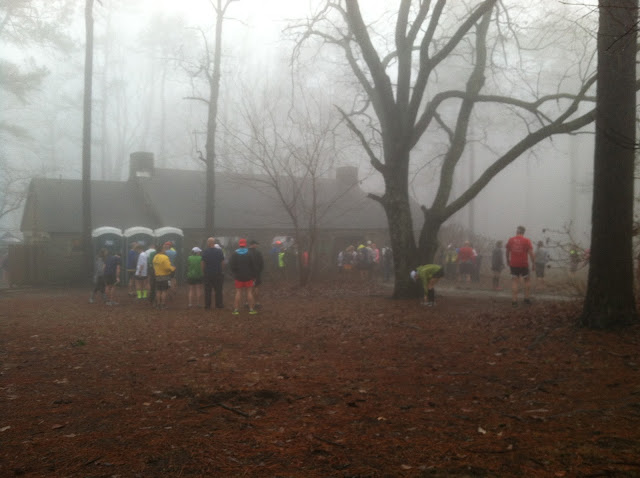 The finish line: bringin em home with the cones. 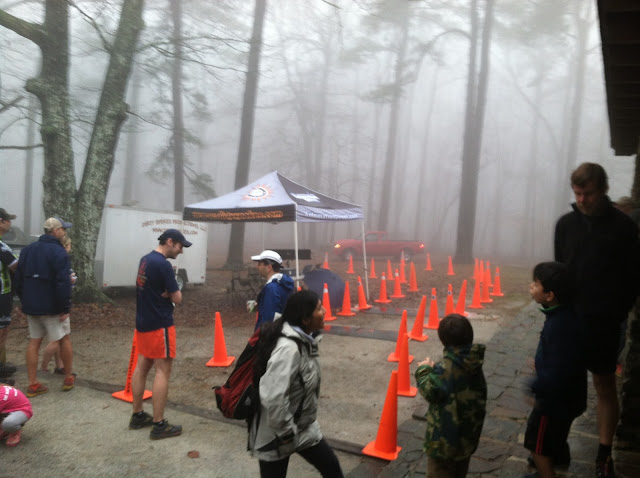 The race: With the entire Dirty Spokes/XTERRA series, they have been so punctual with start times so no issues there once again. Promptly started at 8:30.

Not sure what is happening in this picture, but the Alabama Outdoors guys thought it was sort of funny, whereas I thought it was the most hilarious thing I'd heard possibly ever. And the orange-shirt guy behind me was just not amused. Bottom left corner, I covet your stripy socks.


I definitely wasn't thinking that I could hang with those AO guys for the run, but the last trail race got so bottle-necked at the beginning that I was practically walking. So I was going for an ambitious start. 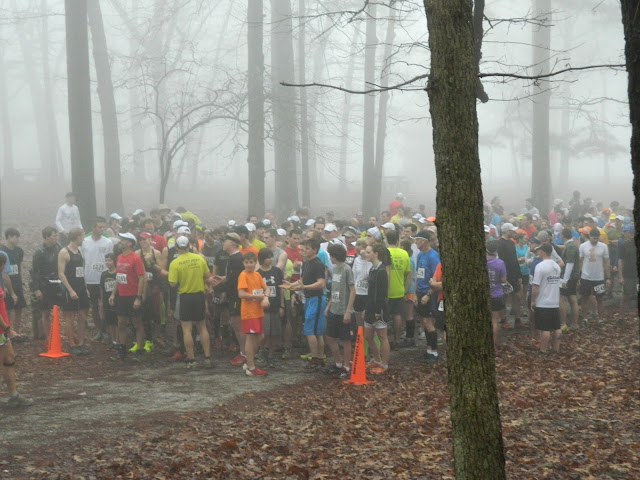 After the whistle blew (possibly not literally), we ran down this trail for a bit, through the parking lot, and then onto the trail we would stay on for a while. So we had plenty of time to space out.

As I mentioned before, the trail was completely full of mud. I wonder if those at the head of the pack had it any better. It seemed like the more the stomping of mud went on, the harder it got to cross the mud pits. There were also lots of little streams to cross. Some of those are possibly new ones that had cropped up with the rain.

One of the highlights of this course for me was all of the rocky formations. We hiked/ran through a rock tunnel. It would have been tricky to run through it, so everyone in my line hiked. And even though this hill (below) kicked my trash, it was gorgeous with the rocky and misty loveliness taking the sting out of my burning hamstrings (and calves and lungs). 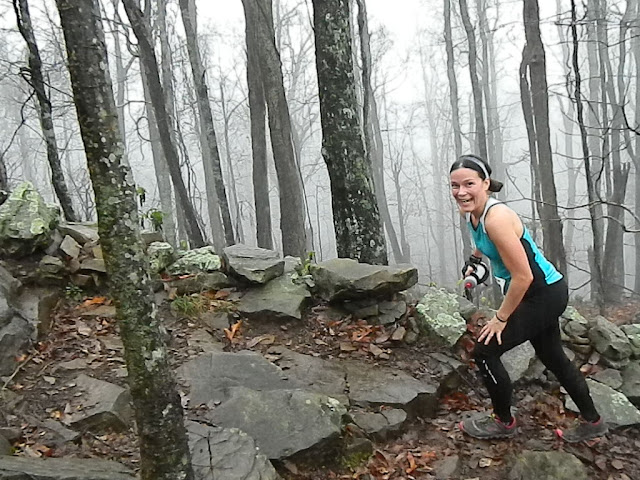 So many parts of this trail made me think, dang, this is amazing. Or, I freaking love this. That could also be the clean diet talking. There was also a long section of trail that was cut right into the side of the mountain, so one side led straight up while the other led straight down. Not a place I wanted to pass someone (luckily I didn't have to) or lose footing, but I loved running there.

After the largest hill (around mile 5), there was a water stop, and it was the only one of the race Definitely prepare to bring your own fluids.

The markings for which trail to follow were not huge, but they were consistent and not too hard to spot.   There were a couple of sections where we crossed over the roads back onto a trail, and they had people stationed there to guide us back onto the trail. Overall I had no directional problems.

The hills were definitely large and in charge, but the downhill wasn't shabby either. I had to slow down more on the downhills because the rocks and mud were slick. If it was dry, this could probably be a pretty fast course, for a trail.

My race: Having not been able to walk the day before because of back issues, I was just happy to be moving along. Although my doc thought it was unwise to run muddy trails, I actually think that helped me to slow it down a bit enough to protect my back and not do anything crazy. I had no falls at all, although there were a couple of largish trips.

For fuel, I carried a handheld of water and some date balls. At about mile 5, I ripped open my baggy of date balls that had now turned into date paste. They were harder to get down than a gel but took similar effort to a gummy. At first I thought maybe they were not going to sit well in my stomach, but the yucks passed. They seemed to be a good fuel alternative. I started to get light headed at the end of the race (when I was also attempting to sprint), so I think that I should probably plan to intake a little more fuel next time. Usually I would carry Gatorade in my handheld, so that might have made the difference.

Several of the steep hills I hiked instead of ran. The major hill (pictured above) was all hiking, but some of the others I hike-jogged. Basically, whenever I was feeling it, I hiked. That is until I got into the last mile and realized that another girl was right behind me. It always makes me so nervous when someone is right behind me, so I tried to pick up my pace a little bit. There was a big hill around mile 8 that I definitely would have walked more of if she wasn't behind me. Thanks, stranger, for keeping me motivated to push it.

Although I could have sworn that she was within arm's reach of me, this pictures says no. Check out the running wonky foot. I get that when I'm really trying (and tired). 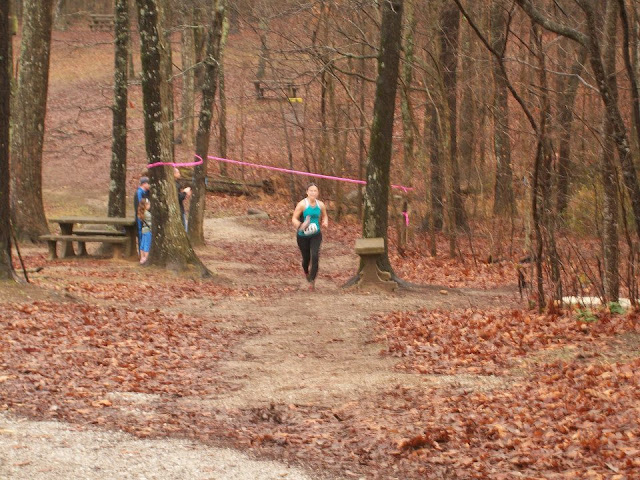 My finish time was 1:36:45 (10:24 pace), which was enough to get first place in my age group and fourth place woman. And, again, awesome for not being able to walk the day before. Thank you, Mr. Miracle Worker Chiropractor.


After-race party: By the time we rolled back in, they had already issued the 5K awards. Mary, below on right, got first place in her age group.


They kept it simple with the eats at the finish. I could only eat the bananas and drink water anyway, so I was solid. 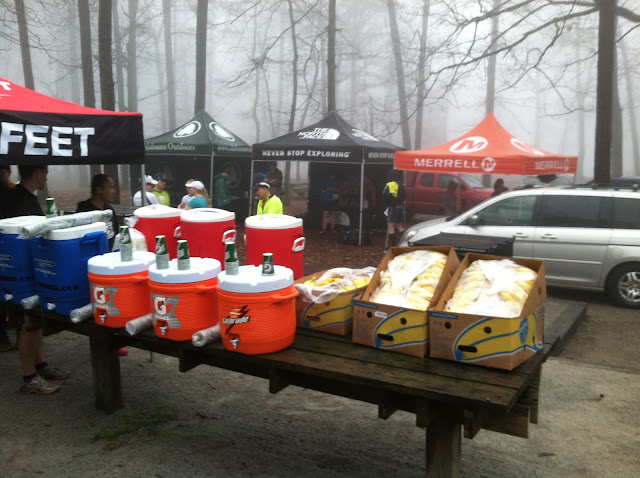 They also brought in a taco truck to help feed the masses. It looks lonely in the picture because that was pre-race. Post-race, that joint was hopping. 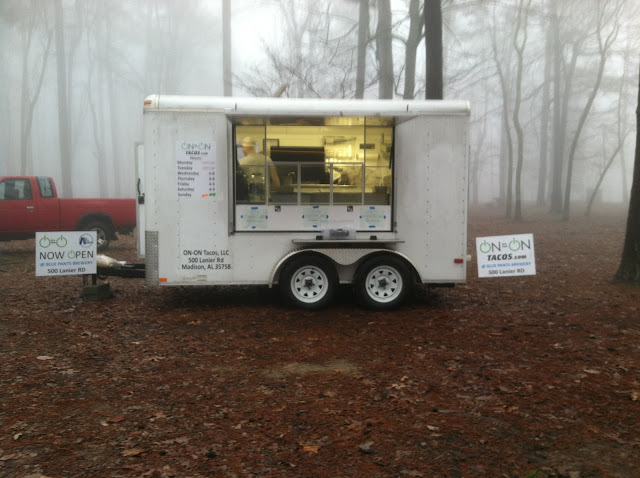 And mostly people took the pants/shorts option, but I might have to adopt this as our house logo. At least for the twins. 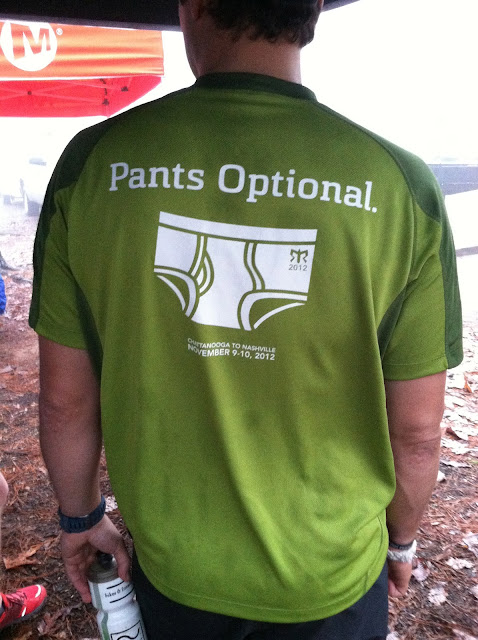 Swag: I've loved all of the shirts from this series. They've done a great job with a unique design and color each race, and the women's cut they chose works really well for me. Not too short, which is a must. 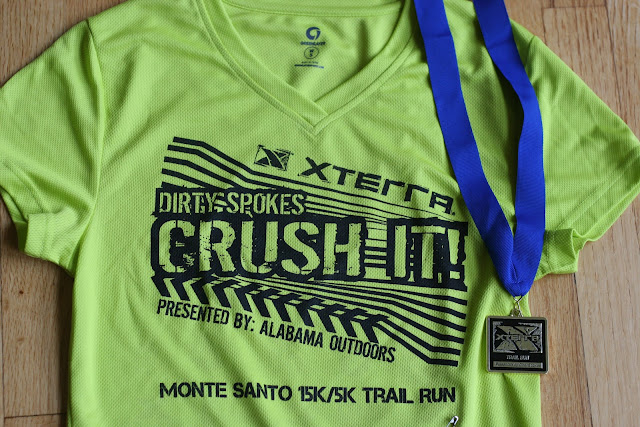 Medals were for age group and overall winners only, but they provided randomly drawn (by bib number) door prizes for everyone. Even though I didn't win (bummer), I saw tons of people walking around holding socks or some other little runner trinket. They had boxes of stuff, and you could go pick out your own prize when they called your number. Cool idea.

Overall: Low profile race with gorgeous, gorgeous (I could even repeat that a third time) trails. They were difficult to navigate in spots because of rocks and mud, but there were also sections where you could gain speed. Carry your own water because not much is provided on the course, and bring cash for the taco truck. Or you could pack a lunch. I would definitely repeat this race to get a chance to head out on those trails again. If you live close to Huntsville or want to make it a weekend (they have camping and cabins), these trails are worth exploring. They're also the home of the Mountain Mist 50K, which dubs itself Alabama's toughest trail run.

Alabama Outdoors sponsored my entry into this race. I received no compensation for this race report, and all thoughts and opinions are my own. Thank you to Mary C., the Vaughns, and We Run Huntsville for some of the above pictures.
Posted by Unknown at 5:41 PM