*If you live near Birmingham, make sure to enter to win an entry into this trail race.

I am not holding myself responsible for anything that is written in this post today. Taxes kept me up until the wee hours of the morning so I'm a little bit loopy from lack of snooziness. But dang it, I finished those suckers, and we don't owe money this year like last year. To realize that after paying taxes all year long it still isn't enough is very deflating.

Now that that's behind me I can refocus on snacks and eating them, my favorite hobby. I'm trying to cook up some things that will be easy to pack in the car on spring break trips. Today, I'm working on this grain-free granola recipe that my sister-in-law shared with me. It only has dried fruit with no other added sweeteners, which sounds like it will be great for the kids. Nothing is worse than a sugar-high kid strapped into a car seat for a nine-hour drive. No thanks.

I also recently discovered that my kids (and me!) all agree that the Cherry Pie Larabar

is edible, even desirable. We rarely agree on snack choices, and I've had a hard time getting them to eat any of the Larabars at all (I myself have gagged on more than one flavor). Even their cousin agreed that Cherry Pie was delicious. When you have three three-year-old boys telling you they like it, it's a keeper. Buy in bulk. 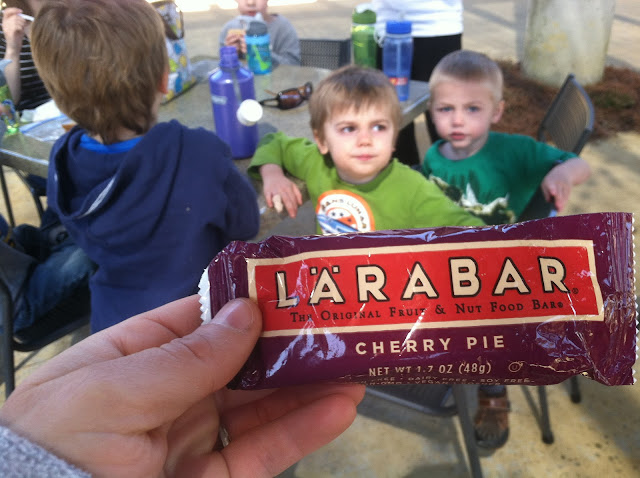 The twinners didn't test this one because I ate it too fast for anyone to even know what was happening. This Manuka Newton snack bar came in my recent Runnerbox, so I'm not really sure where to buy them locally. But I have to find them or learn how to make them because they are tastiness supreme in a wrapper. I couldn't determine if the Amazing Race dude was their pretty-faced spokesperson or pretty-faced creator, but I'm now leaning toward genius-brained creator. 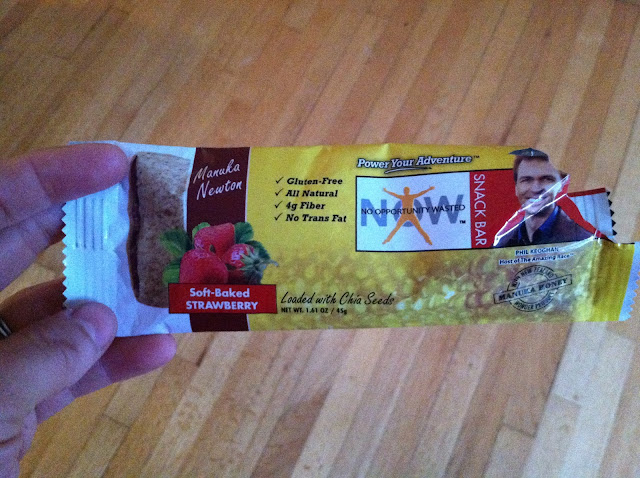 We created something yesterday too -- a dramatic scene at Moe's when I wouldn't buy cookies and juice boxes for the twins. They took it to the lie-on-the-ground-and-scream level. It was one of those moments where you feel glad you can boost another parent's self esteem. Like, at least my kid isn't doing that.

I normally avoid restaurants, especially by myself with the twins, but yesterday was $2 burrito bowl day at Moe's. Since that meal fits my current eating plan and the $2 part fits my budget, I had to take advantage of it, but the twins had other ideas about what would be delicious. Cookies! At least in their flailing, I didn't give in to the cookies out of shame and embarrassment. No cookies for whining! They shared a burrito bowl and maybe (if we stretch it) got halfway through, but they ate every last chip in between crawling around on the restaurant floor. Think of this next time you go up for a kid high five. 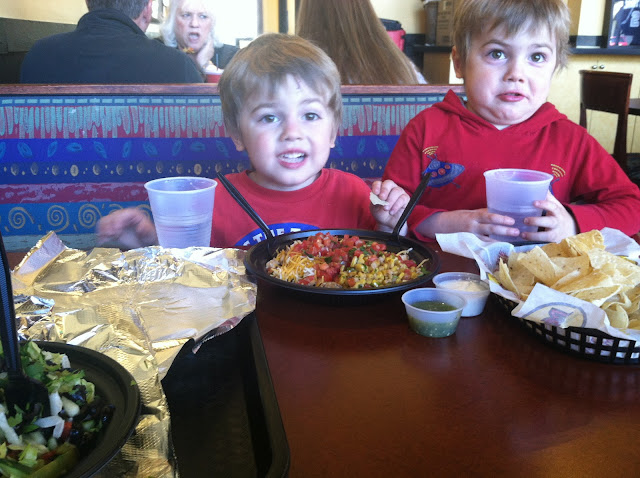 It was much more relaxing to take the family for a picnic at Red Mountain Park. There they can't destroy anything or disturb anyone (well, maybe if there is a super uptight person around). 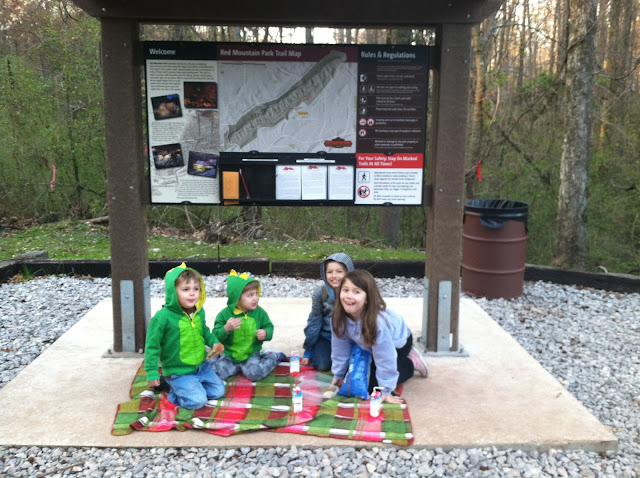 Alabama Outdoors just started up their Tuesday night trail runs at Red Mountain Park, and since my husband was still working and couldn't make it back so I could run, I decided we'd turn it into family night at the park. 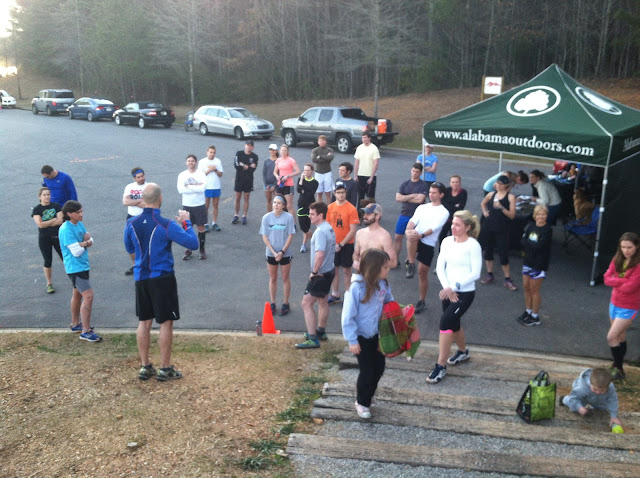 It was great to see a lot of my road running friends out there too! We can't resist the siren call of the trails. Or the ease of taking a potty break on the side of the trail versus in someone's yard.

In other news, Mike the Trainer is still keeping us fit up at Gold's. This week he took on four of us for one session. The cute girl in purple is home from college for spring break, so this was here first torture session with Mike. She dominated and even had the strength to go to Lululemon afterwards. It was hard, but somebody had to do it.

The danger of having friends who wear cute workout clothes is that you want to match them.

To balance out Lululemon, I made a trip to the thrift shop, which is what I call it now thanks to Macklemore. Yesterday, I discovered that thrift store clothes can give you an eye-opening synopsis of your town. Who even knew that we had so many jugglers that we require an intermediate team? And that has got to be deflating when the advanced jugglers are off wearing their sweatshirts to the circus. 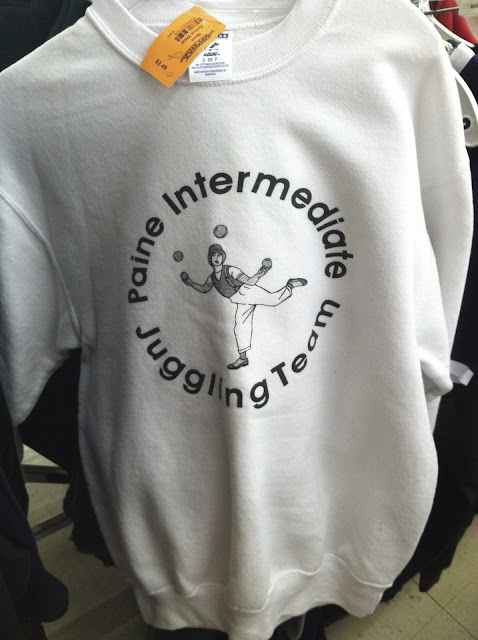 That was my first thought. Then I realized that Paine Intermediate is the name of the school. OK, tricksters.

But this one really got me curious. Mule Day? It's real, and it happens in September. And guess who's putting it on their calendar right now? Thumbs pointing to self. Because I've really been wanting to celebrate an animal that is better than a donkey but not quite as cool as a horse. 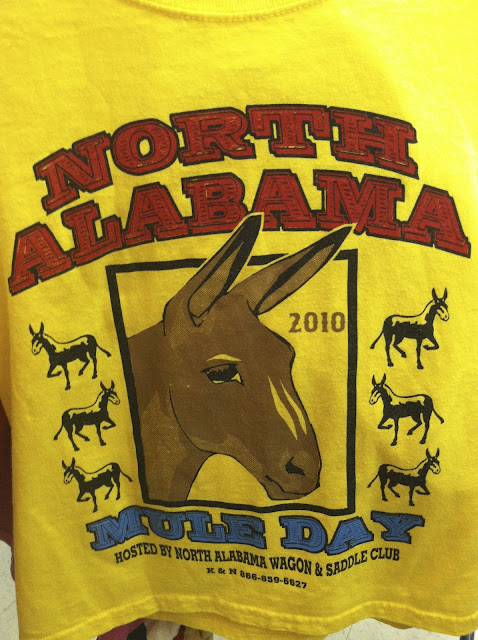 If you could create your own day what would it be? I'd start Massage Day where we celebrate by going to get a massage. You have to because when it's in capitals it's official and has to be done.

What's the worst meltdown your kid has ever had in public? Did it cause you to have a meltdown too?

What are your favorite road trip snacks?

Do you have a favorite Larabar? Cherry Pie is now it.
Posted by Yo Momma Runs at 2:45 PM