Oh right, there was a half marathon recap in there that I completely skipped. After Boston, I wasn't feeling as much like funny blogging, which is why you've seen a lot of serious posts lately, but I think I'm ready to finally get back to talking about peeing my pants (or just doing it) regularly again. I'm sure you missed that a ton.

As for this race (I call it the Jesus Half for short), I was planning to attempt a personal record that day. My coach set my pace for the race at 7:38. My last PR for a half was back at this race in October of last year, so this would be my first attempt to set a PR again and only my second half (on roads) since then.

Because it was my birthday weekend, I did the most logical thing you could do the night before attempting to PR -- stay out until 2 a.m. at a concert the night before, fall asleep before setting your alarm clock, wake up as your ride is ringing the doorbell, get ready in five minutes (three of which are a date with the toilet), and follow zero of your pre-race rituals (eating, drinking, twisting up hair into double buns, watching Kid President's pep talk -- wait, maybe I did that one). If I didn't feel unsure about the PR before that morning, I did now. And to clarify, I did feel unsure before that morning because I had been in major slacker mode, not really pushing myself very hard during runs or really accurately tracking training.

But was I still going to go for it? Sure was. Because it was my birthday, and you win on you birthday no matter how sleepy you are. I nursed twins (which involves sleeping about ten seconds per day), for crap's sake, so my groggy brain told me that I could handle a PR on four hours of sleep.

Getting there: Because this is a small local race in its first year in Homewood, AL, there were zero traffic problems and plenty of parking. We ended up parking at the Resolute Running Center, where Coach Alex was giving all of his runners the VIP pre-race treatment -- warm hangout spot and a not funky toilet (aerosol spray included). Sold!

Pre-race: Once we got to the race start, there were more indoor bathrooms at a building near the starting arch. Just before our 7 a.m. start, we all huddled next to the arch and waited for the gun to fire. They played a recording of the anthem, which was really confusing and I kept looking around to identify an invisible-to-me singer -- remember, I hadn't slept much. Then they prayed (more common in the South, but definitely a must at the Jesus Half), and we were off.

Weather: The high for the day was 76, low of 45. Because we were starting early, we got the better side of the day's weather. I was chilly without my jacket at the start, but I warmed up super quickly on the course.

The course: Because I train on these streets a freakin' lot, I didn't want to look up the course before the race. I wanted it to be a surprise. Although when I got there, I immediately started asking people about it. All signs pointed to a normal start and middle with a hilly finish, which helped me decide to take it hard out of the gate and see what happens.

Turns out that hills also happen in the start.

But if someone tells you they're flat, they feel flatter somehow.

Interestingly, the middle flat section of the course felt the most boring and hardest to stay motivated to run my speediest. But see that little spike at mile 10? That's the dude that deflated my running heart. After that hill, my energy and breathing never fully recovered.

The police and other runners were our main spectators. There were a handful of families out cheering on their loved ones too, but overall, this was a sparsely spectated race. It's new, so hopefully the community will get more behind it with time.

My race: Well, other than the waking up late and not sleeping, it was my lucky day because my coach ran this race with me. Would I have PRed without him? Maybe, maybe not. But I dang sure wasn't going to waste the opportunity to PR with my coach. So it was extra motivation to get serious at the start line.

As you can see in my splits, I started off too fast, but the first two miles were also downhill. Just taking advantage of the natural decline. 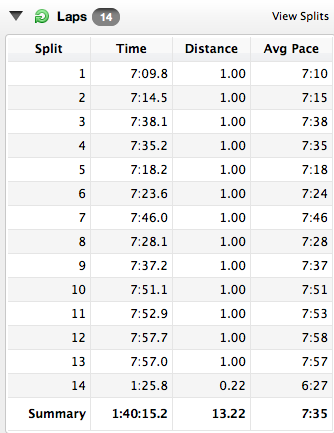 The coolest thing about having Coach A there was that he was constantly updating me on my surroundings. Who is running where, what turns are coming up, how our pace is looking. Basically, I didn't have to think about anything during that race except just staying with him. It was really refreshing, and I highly recommend it if you have a huge goal coming up.

Also, when I was in the hurt locker on the last 3-4 miles, he really kept me going. He maybe could clarify these statements (things get foggy with race brain), but I'm pretty sure he mentioned something about how this was easy compared to having four babies.

Just before mile 10, I made the crucial mistake of saying that I felt really great. That was before that brutal hill that seemed to come out of nowhere. You turn a corner, and there it is -- it's steepness making you feel small and insignificant. That took some of the gusty wind out of my running sails.

For eating, I took a gel at around miles 5 and 10. Because I was only hydrating with water from the aid stations, I felt like I needed to take in a few more calories during the race through gels.

After the few miles of hill brutality at the end, the speedy downhill finish was like heaven (you know, because it was the Jesus Half). I would have loved to be able to run it in just under 1:40, but my legs just didn't have it that day. My official finish time was 1:40:12, 7:39 pace, and I was third overall lady. I actually crossed the finish line in second place, but later I learned that a late starter (my speedy friend, Kelly) had a chip time that put her in second place. Dang, I wish I would have known so I could have pushed for those 45 extra seconds. Not likely, but it would have been worth a shot.

For those of you who may not know, the first time I met Alex was at the Nashville full marathon last year. He was part of Team Random Stranger, which is the name I made up for a "team" that forms any time you help a random stranger during a race. Turns out that this random stranger was actually from my hometown, and I was really surprised when I figured that out a few months down the line. I can honestly say from that the first moment I met him, he has inspired me to run harder and happier. Thanks, Coach Alex!


After the race: So this was one of the most fun post-races I can remember. The setting and snacks were all nice, but the real treat was being able to run it in with my gym buddies. We have trained together for so long that I forget what it was like to train without them. Oh wait, no I didn't -- it was freaking boring as dirt to run on a treadmill without them. Moms do what they have to do to get training in, and the treadmill is a necessary part of the running package for me.

Our dream was for all of the gym mommas to get to the finish line together, and we made it happen.

I have to throw in this picture of Diane because it's the face we see every day while running on our side-by-side treadmills. We're rarely not laughing. 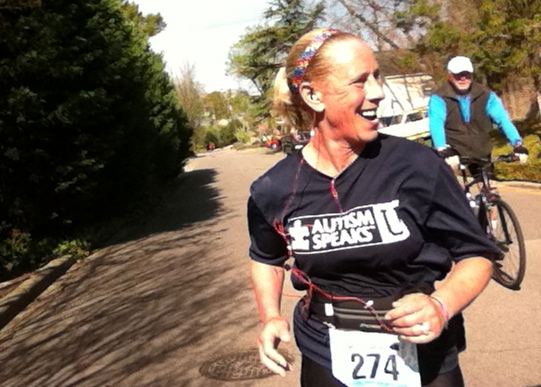 Mission accomplished at the finish! 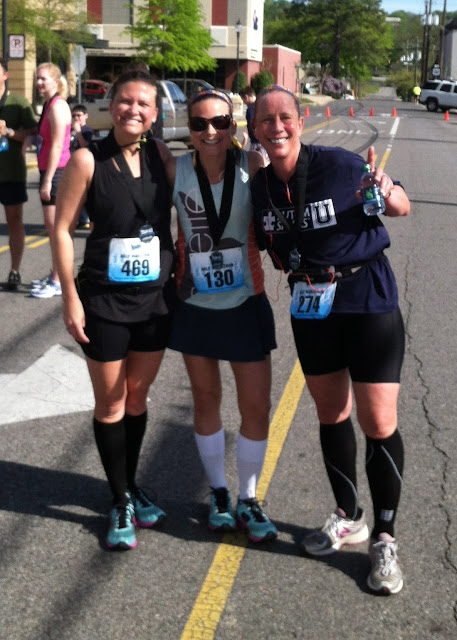 Diane's husband also brought his own personal cooler full of what we needed for a real after party. That's right -- you guessed it. Coconut water! Bring it.

I was also super proud of my friend Annie, who now also works with me at Life Time Fitness. She ran a 1:43 and some change, making it a huge PR day for her too! 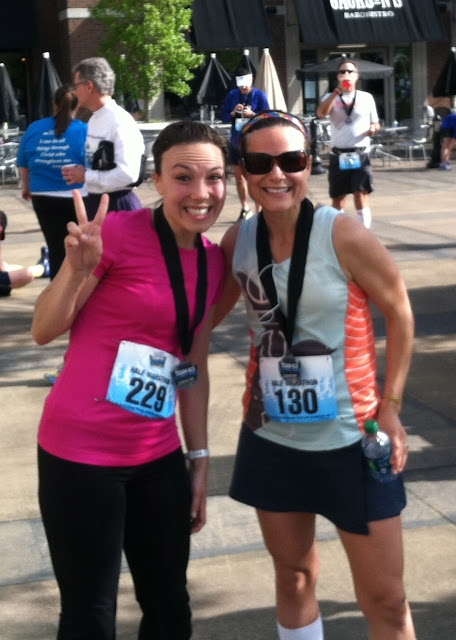 Also shout out to Tanya, who blogs at All in Stride and who was a pacer for the race. Check out her blog to read about what it's like to be a pacer. 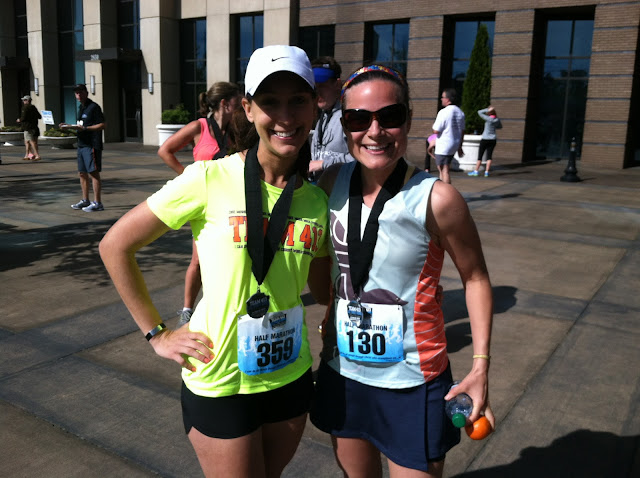 Swag: They only offered the giant unisex shirts. So I got one for my husband. As I was taking this picture, my 50mm lens literally split apart and fell onto this shirt, so you get no picture of the back. But it has no advertising and instead has a Bible verse (Phillipians 4:13, of course). Rarely do I get a shirt without a million ads on the back. 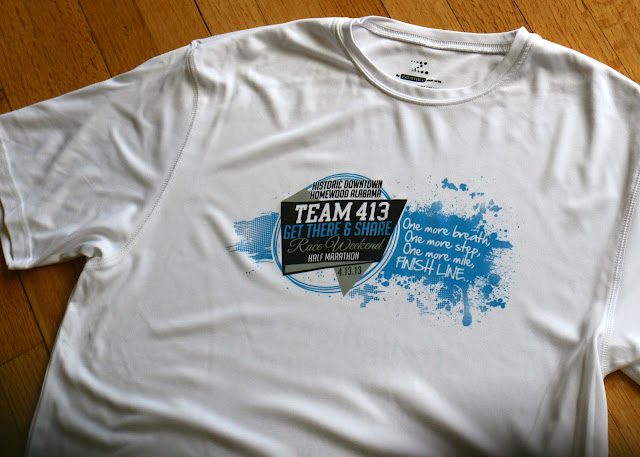 Here are the medals for the half marathon finishers. 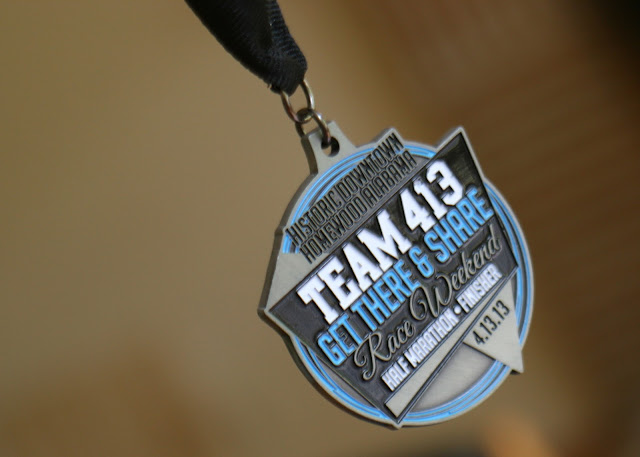 We also got a coupon for a free 6-oz. froyo at Yogurt Mountain. Possibly one of the best ever swag coupons I've received from a race.

The only weird thing about the awards for this race was that they only had first overall winners, instead of first, second, and third, but then they went three deep in each age group. So even though I was third overall, my place is second in my age group because the second-overall girl was also in my age group. Just a little different from most races. Have any of your half marathons followed that pattern with awards?

Also, there was an issue with shipping the awards, so they only had the awards for first-place finishers and told the rest of us that they would ship ours. I still haven't received it, but I'm really not worried about it.

Overall: For $50 (I registered with a coupon at the Mercedes expo), it was a decent race. The police did a fantastic job with traffic, and the course offered some challenging spots. Especially near the finish. Most of the spectators seemed like they were cheering on a loved one. It would be awesome if they could figure out a way to encourage people to come out of their homes and cheer. We completely run through neighborhoods for the last few miles, and only an occasional person was out to spectate. I would also love to have women's shirts (of course) next year. Choose this race if you like small races with a homey feel or if you like getting a race shirt with a scripture on the back instead of ads.
Posted by Unknown at 1:28 AM