Remember when I revealed to the e-world that I often get mistaken for a twelve-year-old boy based on my profile in a smashy sports bra, or maybe in any bra? Well, today I second that revelation. In the past year, since that not-shocking-to-anyone-who-has-seen-me-in-a-tank-top revelation came out, pretty much zero has changed. In fact, I was insulted just today by a tank top that I purchased online that fit everywhere but in the chest region, where it bagged out like a parachute floating someone gently back to solid ground. To be fair, I would like to see the model for whom this tank was fitted because it seemed like it wouldn't work for anyone without surgical enhancement. Or just more bra-filling genetics. Neither of which I have.

To think that a year ago I was just discovering padded sports bras is like thinking back to the moment I first loved running. It wasn't so long ago that the memories have faded into cloudy brain soup, but at the same time, I don't really want to remember living without it. The now makes me happy.

In case you're not familiar with Handful, check out this video. I especially like the part where they pull a water bottle out of the bra pocket. I feel like I might try that one day.

So I'm bringing all of this to the forefront today because I recently found a site that is getting its start by selling running products that I happen to also love. The site is called Free Sole Activewear. I first took notice of this site because they sell Oiselle running duds, which I obviously adore, and they had some sale items that I was interested in checking out. They also sell Handful bras, which I love to wear every day with our without an impending workout.

Not surprisingly, the founder of Free Sole Activewear, Danielle, is also a runner. Her goal with Free Sole Activewear was to create an e-hub of her favorite runner gear so that she could share what works with fellow runners. On top of that, she wants to provide quality products that won't totally bust your budget.

So to help her celebrate the entrance of Free Sole Activewear into the runner marketplace, she is letting me host a giveaway of an adjustable Handful bra (color and size of your choice) from her site. When I was originally reviewing Handful, I remember reading that the straps were too tight for some people, and they wished that Handful made adjustable straps. So guess what Handful did. They made a new bra with adjustable straps. You ask, they listen -- another reason I love their company. Plus I am totally into the fact that their company is created and led by women. You can see them dancing and kicking general butt in this video.

Here is the original bra vs. the adjustable one. The straps on the original bra worked fine for me, but it's always nice to have that option in case you are built slightly different from the mold they use. 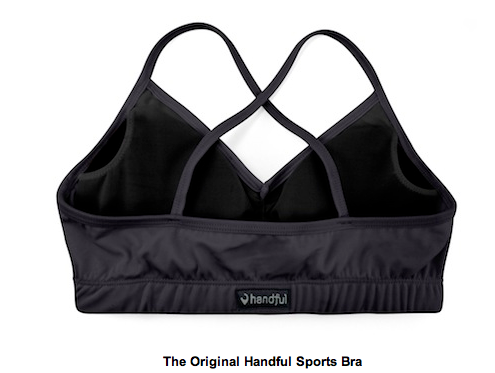 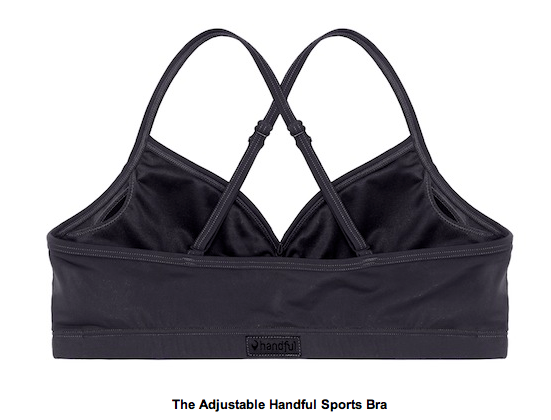 And check those pockets for the bra pads on either side. That's a perfect spot for people, like me, who can't break the habit of storing things in their sports bra. Long runs require stuff (like eating stuff, drinking stuff, emergency communication stuff), and my sports bra is the most convenient place to load and unload said stuff.

Here's proof I like to put a truckload of stuff in my sports bra.

Here is my review of the original Handful bra in case you wanted to read a lot of awkward comments about my baby feeders.

Moving (quickly) on. Let's get this giveaway started!

To enter: Leave a comment here or on Facebook telling me that you want to win. And, dudes, you can totally enter for your wives. Or for your cross-dressing. Whatev.

For bonus entries: These are completely optional! But if you do them, make sure to leave a separate comment for each so I can count them all.

Enter up until Wednesday, May 1st, at midnight. I'll pick a lucky winner after that using random.org! Because lately I've gotten some feedback that people's comments aren't going through on the site, feel free to enter on my Facebook page. Good luck to all of you, and thank you again to Free Sole Activewear for sponsoring this giveaway!
Posted by Yo Momma Runs at 11:26 AM