Rise each time you fall

After the emotional roller coaster with Boston this week, I was looking forward to my long run this weekend (an 18-miler that came closer to 19 without me even noticing because of the great company), spending time with my family and just letting go of my supercharged emotions in general.

Then at church today, one of the speakers shared the below poem, which, of course, resonated with the runner me. I've heard this one before, but it's been a while. And it sparked a memory from the Team 413 race, that I had almost forgotten about.

As the last finishers were headed towards the blow-up finish arch, the race director called those of us still there to come over to the finish line and cheer them on. As we did, a couple (I assumed they were husband and wife) were walking into the finish. When she got a little closer, I realized that as we all lined up and cheered, she was crying. I'm not sure if she was in pain, happy to be finished, or grateful for our support, but either way, she was overwhelmed with emotion. And it set off my cry-ometer, which is easy to set off these days. I didn't even know her, but I felt so happy for her that whatever obstacle brought on that emotion for her was getting pushed aside at this finish line. She had done it! And as one of the last finishers, she got more cheers than anyone else I had seen finish that day.

And just when you thought you couldn't find everything on the internet, I found this picture of them finishing with me and my happy cry face in the background.


So here's a tribute to this random lady above who inspired me at the Team 413 finish line and all of us who finish behind sometimes.

"Quit! Give up! You're beaten!" They shout at me and plead,"There's just too much against you now. This time you can't succeed!"And as I start to hang my head in front of failure's face,my downward fall is broken by the memory of a race.And hope refills my weakened will as I recall that scene.For just the thought of that short race rejuvenates my being.A children's race - young boys, young men - how I remember well.Excitement, sure! But also fear; it wasn't hard to tell.They all lined up so full of hope; each thought to win the race.Or tie for first, or if not that, at least take second place.And fathers watched from off the side, each cheering for his son.And each boy hoped to show his dad that he would be the one.The whistle blew and off they went! Young hearts and hope afire.To win and be the hero there was each young boy's desire.And one boy in particular whose dad was in the crowd,was running near the lead and thought, "My dad will be so proud!"But as they speeded down the field across a shallow dip,the little boy who thought to win lost his step and slipped.Trying hard to catch himself his hands flew out to brace,and mid the laughter of the crowd he fell flat on his face.So down he fell, and within him hope; he couldn't win it now.Embarrassed, sad, he only wished to disappear somehow.But as he fell his dad stood up and showed his anxious face.Which to the boy so clearly said: "Get up and win the race!"He quickly rose, no damage done; behind a bit, that's alland ran with all his mind and might to make up for his fall.So anxious to restore himself, to catch up and to win,his mind went faster than his legs; he slipped and fell again!He wished then he had quit before with only one disgrace."I'm hopeless as a runner now; I shouldn't try to race."But in the laughing crowd he searched and found his father's face.That steady look which said again: "Get up and win the race!"So up he jumped to try again, ten yards behind the last."If I'm to gain those yards," he thought, "I've got to move real fast!"Exerting everything he had he gained eight or ten,but trying so hard to catch the lead he slipped and fell again!Defeat! He lay there silently, a tear dropped from his eye."There's no sense running anymore; three strikes: I'm out! Why try?"The will to rise had disappeared, all hope had fled away;so far behind, so error prone; a loser all the way."I've lost, so what's the use," he thought. "I'll live with my disgrace."But then he thought about his dad who soon he'd have to face."Get up," an echo sounded low, "Get up and take your place.You were not meant for failure here. Get up and win the race.With borrowed will, get up," it said, "you haven't lost at all.For winning is no more than this: To rise each time you fall."So up he rose to run once more, and with a new commithe resolved that win or lose, at least he wouldn't quit.So far behind the others now, the most he'd ever been,still he gave it all he had and ran so as to win.Three times he'd fallen, stumbling; three times he rose again;to far behind to hope to win, he still ran to the end.They cheered the winning runner as he crossed the line first place.Head high, and proud and happy; no falling, no disgrace.But when the fallen youngster crossed the line in last place,the crowd gave him the greater cheer for finishing the race.And even though he came in last with head bowed low, unproud.You would have thought he'd won the race to listen to that crowd.And to his dad he sadly said, "I didn't do so well.""To me, you won," his father said. "You rose each time you fell."And now when things seem dark and hard and difficult to face,the memory of that little boy helps me in my own race.For all of life is like that race, with ups and downs and all.And all you have to do to win is rise each time you fall."Quit! Give up! You're beaten!" They still shout in my face.But another voice within me says: "GET UP AND WIN THE RACE!"

We win when we don't give up.

There is one thing I don't like about this poem though -- it leaves out the girl racers. Maybe the setting is the pre-Katherine-Switzer era.

Now on to the most important question of the day. How long does a Slinky last at your house? We made it almost 24 hours before this happened. And even though this was the handiwork of the twins, I have to admit that I am sometimes tempted to take a new slinky  and spasmodically stretch it all out of shape. It's the same urge that I fight every time I'm standing on the edge of a cruise ship and want to throw random objects over the railing into the rolling ocean below. For no reason whatsoever, other than that you are not supposed to. 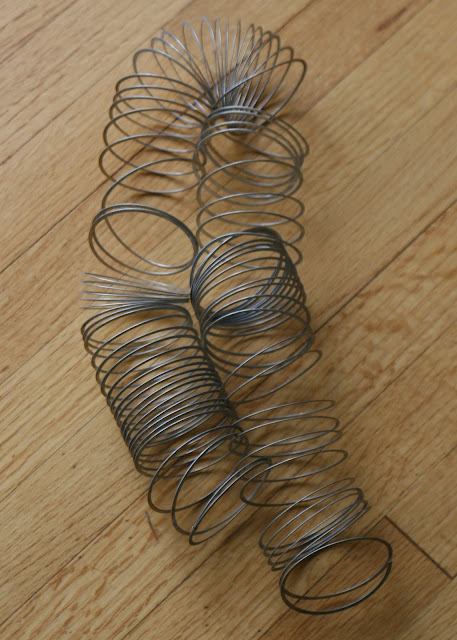 Have you ever been overwhelmed by emotion at a finish line? I definitely was after BQing at Mercedes. I made it through the finish arch without tears, but then I cried sporadically the rest of the day.

When was the last time you were glad you didn't quit something? I get overwhelmed with parenting many days (or several times an hour), but I'm definitely glad I haven't quit.

And really, how long would a Slinky last at your house?
Posted by Yo Momma Runs at 12:06 AM