Cahaba River Ramble was part two of my double race weekend. Since it was the second part, it was much more painful in an I-can-barely-walk-much-less-run kind of way, but that didn't take away from the awesomeness of the course.

Getting there: From Birmingham, it was about a 45-minute drive to West Blocton, AL. We met early and got there in plenty of time to pick up our packets. We were following someone who has already been there, so I can't really tell you if it's easy to find or not. Once we arrived, all of the racers just parked along the side of the dirt road. This worked out great until the giant dually with the trailered hovercraft tried to squeeze through to get to the river. I think I held my breath for about ten minutes while he eked through about as fast as I climbed the hills in this race (i.e. painfully slow).

Pre-race: Signing up for the race was easy. My brother had to register that morning ($40), and they got him right in with no issue at all. Once we were registered, we all just hung out and chatted by the start line, which was about ten feet from the registration table and two steps from the port-o-pots. I was grateful for the proximity because I was still kind of walking sideways with a foot drag to compensate for my sore achilles. And I was about to run 10 miles. Super smart, I know. Remember that I never said on this blog to follow my example. It's like how you learn from your parents' mistakes what you don't want to ever do. Then you end up being like your grandparents who your parents were trying to be the opposite of -- and the beat goes on.

Also I got to meet some Yo Momma readers, who I still swear are related, but they were not claiming each other. I think they seemed like sisters because they were both so equally nice and smiley. You know how you feel related to certain friends after you've been friends for a while. I think that's these two. 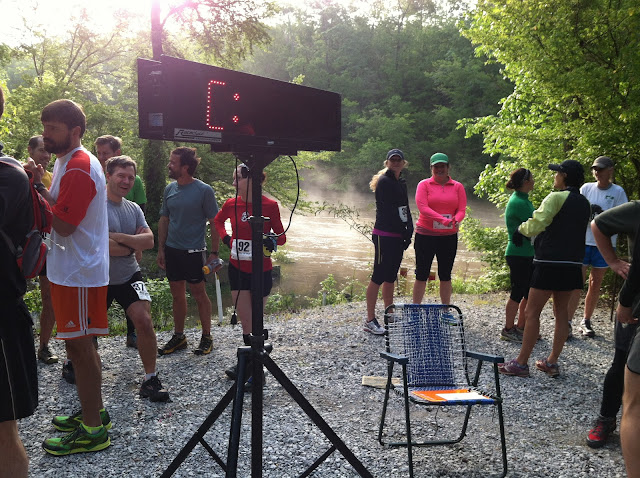 Now see that misty river above. When it's in the 40s outside, that water is cold. Someone tried to convince me that the water was warmer than the air, and that person was wrong. If you're reading now and you were the one who told me that, I don't hold it against you because at least you gave me some hope that I wasn't going to die when I jumped into a freezing river.

And that's right, about five minutes before the race was when I learned that we were going to be required to jump in the river and swim across. Huh?! No one had my back in telling me about this before I got there and registered. The word on the street (trail) was that it normally isn't as high, and you can run through it. But we got lucky, and this year it would be over our heads and require swimming. I was still shivering from running for 5.5 hours in the freezing rain on the previous day, and I was very, very dissatisfied with the prospect of being that cold again.

So I did what any frozen person would do -- I tried to convince my brother that the 5K, which did not require river crossing, would be so fun. He promptly responded with heckles and boos and other big brother taunts to get me to feel douchey about trying to only run the 5K. Basically if I ask him to wake up before 5 a.m. to run with me, we are doing the prescribed/promised workout for the day or more. Never less!

So that was it. I was back in. Frozenness and all. 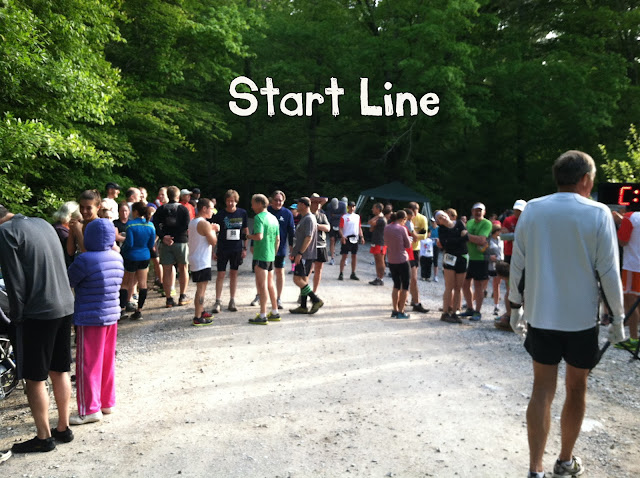 Bonus, they had snacks at the start line: bananas, oranges, some other breaded things that I don't eat, water, and such. Since this was also the finish line, these snacks doubled as our after-race treats.

The course: Even though I tried to convince my bro to run the 5K, I'm glad he was unrelenting on sticking to our plan. The 5K was down the gravel road (as pictured above) to the water and back. All gravel road equals less fun.

Once you jump into the river on this course, the fun starts. Also, jumping into freezing water takes your breath away. I'm not sure that I've ever experienced anything like that because I'm usually creeping slowly into freezing water (or not at all) instead of diving in as fast as I can. It literally took my breath away, and it felt like I was going to drown because I couldn't breath. So I flipped over and floated on my back for a minute. Then we stood around taking these pics for even more minutes. Not the best use of our "race" time, but it definitely made it more fun.

There were some ropes to help you along, which I used on the return trip more than the trip out, and the guy in the canoe was there to watch out for us in case anyone got in trouble, which was almost me with the whole not breathing thing. 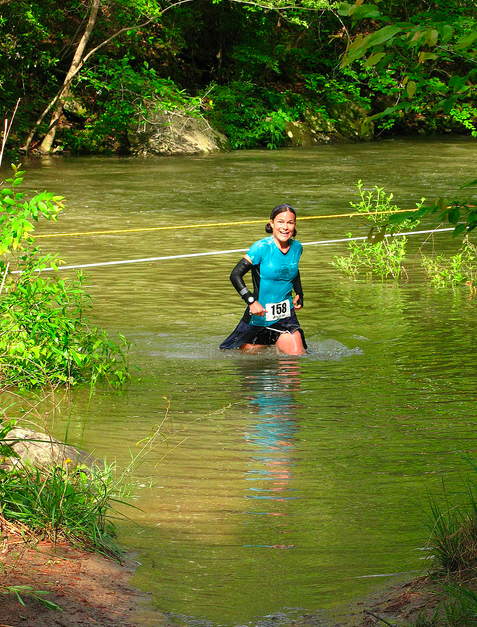 After the freezing river, which actually wasn't as bad as I thought it would be once we were warmed up from running, we ran along the edge of the water, through sand and over downed trees. The terrain of this course was my favorite part. It had the water crossing, sand running, downed-tree hopping, rocky hills, weedy paths, pine straw covered climbs, screaming descents. It felt like places I've been in Florida, Alabama, Utah, and California, but all in one.

So I loved the course. I was slightly confused because they described the route as a lollipop. We decided that they need to work on that imagery because it wasn't even close to a lollipop. I would call it more of a skin tag, but I guess that they were going for something more appealing with their description. 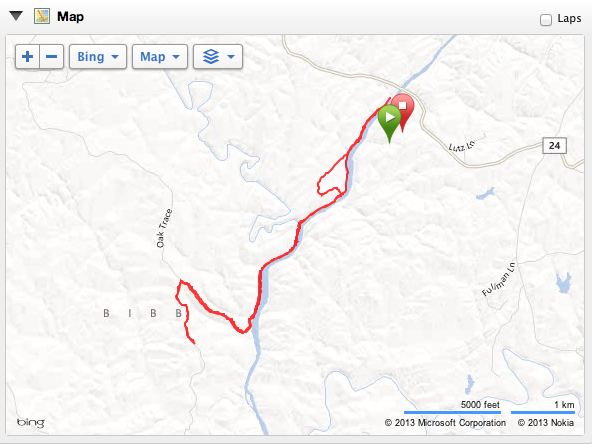 In case you can't tell from this map, you run up and back along the same path, and then you break off for one extra loop right before the finish.

I had heard about The Equalizer, a killer hill in this race, so I was happy that we hit it around mile 3 and got it over with. Oh, but wait, that's not the one they were talking about. It was that other one at the end. That one's The Equalizer. Super steep, but not very long, so I actually thought it was easier than the first hill. Whatever, I hiked both of them because they were both trying to kill my lungs off.

I'm very glad that my brother was with me because I ran past the sign that told us to turn onto the route's skin tag (that loop at the end with The Equalizer). I started my watch late, so I just figured that it was a little bit off on mileage. That sign should be more neon or something because it really didn't stand out at all. Luckily, my brother was paying attention and got me to turn around and come back. Maybe I should listen to what people say at the start line, but after they said "lollipop," I lost concentration. Something Pavlovian was happening.

My race: So as I mention above I was feeling rough at the start. Somehow my first mile was the fastest, but it really didn't feel that way. You can see that about halfway through I had a little burst of energy that conveniently coincided with some downhill running. Downhills always remind me that I totally love running. 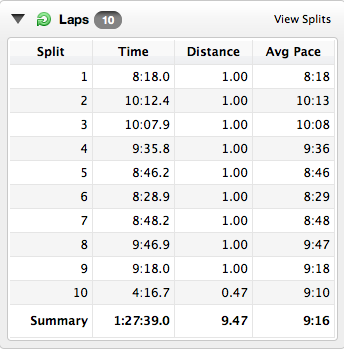 One thing I would not do again is wear so many darn clothes. I thought it would help to bring a jacket (that I could possibly keep dry) to put on after I got out of the water. Well, that would have been cool if you didn't have to dive completely into the water.

Surely I can keep this tiny ball of jacket dry. 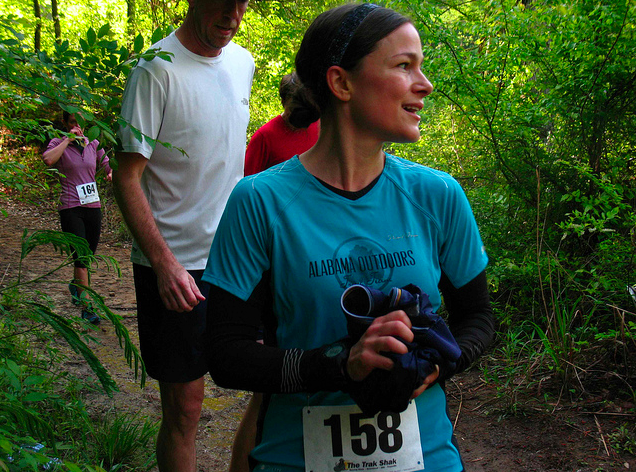 That was a big no on keeping anything dry. So I ended up wearing that jacket tied around my waist the entire run with the zipper slapping my leg. I kind of hate running with jackets tied around my waist. They always twist and wind around and try to hurt you in wicked ways. 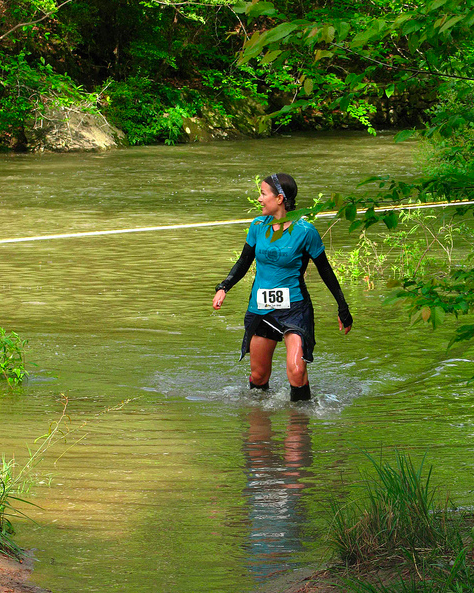 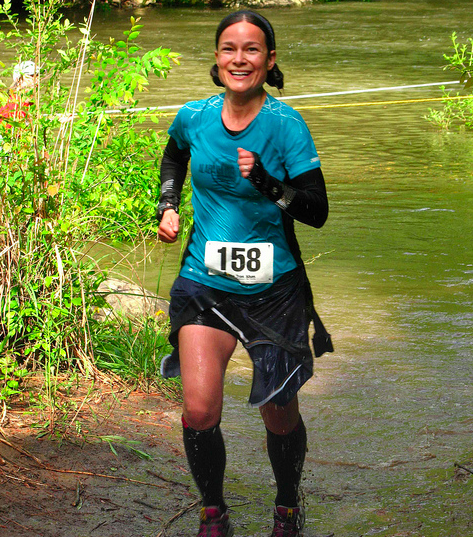 So I really felt like I was racing starting around mile 5, which appears to be how long it took for my legs to warm up and forget that they had just run a 50K the day before. I'll look for that to be my warm-up period during the stage races too. Five miles in, and things should hopefully start to work in the leg region.

The final stats for me were 1:28:16 and fourth woman (I think). My brother beat me by a minute by outsprinting me at the end. Punk.

After party: I changed clothes immediately after the race to avoid freezing my buns off. Then I partook of the aforementioned snacks while we waited for some of our Alabama Outdoors teammates to receive their awards.

Congrats to John (far left) and Ali (the girl who isn't me in the pic below) on their first place finishes! They both won a new pair of kicks for finishing first. Dan (far right) came in second, and the other John (yellow-ish hat) came in just 25 seconds behind him including a vomit session before the finish line. We should start a new winner category for fastest finisher who also vomits at least once during the race. That takes skills. Or skillz -- because the z adds street cred. 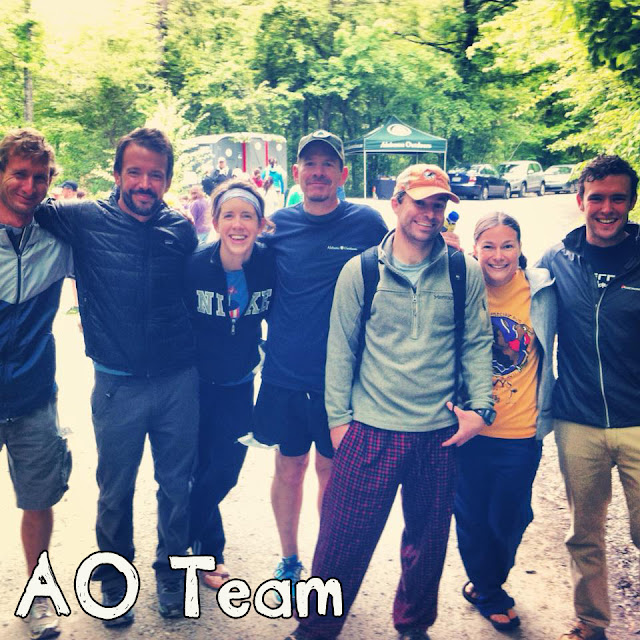 Special thanks to my brother for taking it slower with me. I love living in the same town as him! 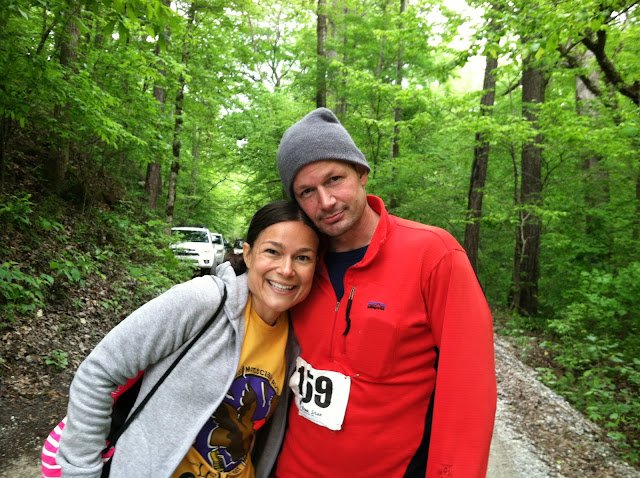 Overall: This is a must-run trail race in Alabama. It's short enough that it's not going to kill your legs, but the scenery is gorgeous. The water is not usually as high as we had it, but there's always at least some water to splash through. All of the race proceeds go to benefit the Shane Hulsey CLEAN Environmental Education Program. Definitely run this in 2014.

Alabama Outdoors comped my entry into this race, but all thoughts and opinions regarding this race are my own.
Posted by Yo Momma Runs at 5:00 AM