Thanks to everyone who responded with tips and concern for my achilles! The chiropractor worked it over thoroughly yesterday (fingernails-digging-into-the-table kind of worked it over), and Coach Alex gave me some exercises to work into my routine. This weekend I'm going to be in 100% rest-from-running mode while the kids and I visit the grandparents' farm in Kentucky. I'm almost absolutely maybe sure my achilles will thank me later for that.

In the meantime, I still need to fill you in on the run that started (more like continued) some of my most recent aches and pains, the Run for Kids Challenge 50K at Oak Mountain State Park. There was also a 12-hour race and a 10K that day. The great thing about this race is that all the proceeds go to Camp Smile-a-Mile. Registration was $75 for the 12-hour race, $50 for the 50K, and $35 for the 10K, and I think I read somewhere that the registration fee is tax deductible. Am I making that up? Anyone who knows, feel free to chime in. Also they gave discounts to any high schoolers (and younger) who were signing up to run. Pretty cool!

Getting there: Oak Mountain is very easy to find from I-65, and I've never had any trouble parking there. Usually there is a $3 entry fee, but on the morning of this race, they waved us through. That's never happened to me before on race day or not, so that was a cool bonus.


Pre-race: The 12-hour and 50K runners were starting at 7 a.m., which just happened to be in the middle of the longest rain storm ever known to humans. I can't prove that or anything, but just go with it. It rained all week, all night, all morning, all of forever. I dreamed about rain, I sloshed in rain, I shook my fist at rain, and I loved the rain (mostly).

The earth was already thoroughly soaked upon our arrival, so we knew we were in for a fun day on the trails. We all huddled under the pavilion with our giant, medium, and small rubbermaids and coolers. I kind of wanted to examine the contents of all the boxes to get ideas for next time. Somehow I managed to fit everything I thought I would need into a plastic container the size of a shoebox. And guess how many times I used it during the race. Zero. I had extra shoes and socks in there just in case, but I just never needed them.

Amazingly, a lot of my local running buddies got into Western States this year, so they used the 12-hour race as a training run. Vanessa, who is the race director for the Trail Running Festival at Ruffner, won third place for the ladies in the 12-hour. P.S. I love this picture.


Kyle (middle in the pic below and BUTS creator) also got into Western States. He and Greg (far right in the pic below) ran the 12-hour too, and Stan (far left in pic below) and I stuck with the 50K. Even in the pouring rain, Kyle didn't run with a hat.

Surprise, he wasn't the only one. Jonathan (out in front in the pic below) didn't mind rain all up in his eye either.


The course: This would be a perfect introduction to the 50K for someone who is a little nervous about the distance and wants to test their legs on a less hilly course. Basically, you do the same 3.something-mile loop nine times to reach your 50K. 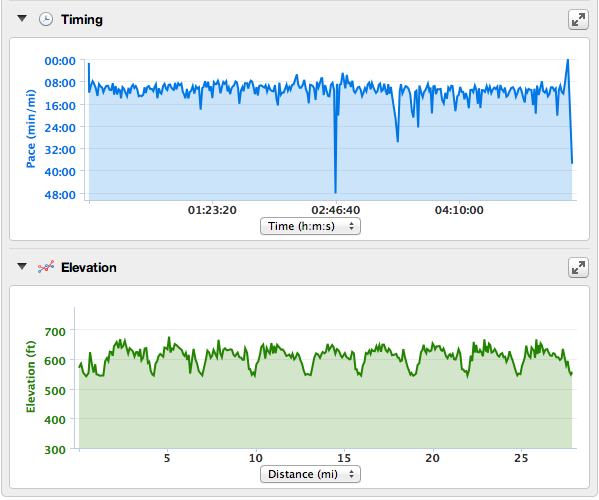 Each lap has 200+ feet of climbs, making it all runnable. You can see from the chart above that I started taking walk breaks on some inclines a little over halfway through the race. I wasn't trying to run all out on this day, just going for the finish, so I didn't push myself too hard at the end. But if you are trying to race, it is definitely possible to run this whole course.

The wet conditions made this course a little trickier/more fun. As the day progressed, the rain eventually slowed, and the trails started to dry a bit. Most of the damage was already done though, and at the final turn on the course, there were some serious mud pits. Perfect for mud wrestling and perfect for falling, which I almost did every single time. You would think you would learn after the first five laps, but nope. Every time, I thought I could skid in no problem, only to realize the breaks were out.

Every time we looped around, we got a chance to pick up snacks, plus we had to check in with the race timers so that they could count our laps. The snack selection was plentiful with Hammer Gels (my faves!) and Hammer Heed to drink. Somehow the HEED did not taste half as crappy as it did at Mt. Cheaha 50K. This is either a case of better flavor combined with better drink mixing or a case of you just learn to live with eating nasty junk while you're running.

My race: My only goal going into this race was to finish with a better time than at Mt. Cheaha. If the ground was dry, I could have possibly given it a little more gas on the trails, but as it was, I was just happy to finish without breaking anything.

Each time I passed through the aid station, I grabbed something to eat. I took about four gels total, and the rest of the time, I ate chips, oranges, and bananas. I went through two fillings of my Camelbak, so about 100 oz of fluid. It was hard to force myself to drink as much as I needed to because it was already so wet and drenched outside that it was hard to remember to keep at it.


The other great part of this course is that the loop enables you to see tons of people as you run along. I never ran with anybody for a junkload of time, but I got to see little snippets of people and talk to lots of different folks along the way. I loved that part of the loop. The part I didn't love about the loop is that there were not enough places to hide if you needed to, you know, go. Plus there were so many people on the same loop that it made mooning everyone in that scenario inevitable.

I ran all of Mt. Cheaha without having to go pee -- weird, I know. But this race was totally opposite. I had to pee from step one. Finally I stopped to go in the toilets that were a little bit off the course, and just a couple of laps later I had revisit the facilities. It was actually a welcomed rest both times.

For the entire race, I only looked at my watch once around mile 9 to see if the loops were adding up to what I thought they were. I never once looked at or cared about pace. I just wanted to keep moving forward.

I wore these Injinji socks, which I credit for allowing me to keep running without having to stop and swap socks. I don't wear this pair a ton because I normally prefer the knee-length compression socks, but I really loved them for this race. I had no new blisters, and my feet stayed warm, whereas my hands locked up from cold so much that I couldn't even tie my own shoes.

About lap five is when my right calf started hurting (maybe compression socks would have helped to prevent this), and I decided that I would hike some of the inclines to give it a rest. So that's exactly what I did. My calf never bothered me after the race, just my achilles, which I'm pretty sure is related to the calf pain.

My final time was 5:21:24 (see official results here), which was more than an hour faster than Mt. Cheaha 50K, not shocking considering the difference in elevation. I also won first place for women (sixth overall), which was a really cool surprise. Plus I got this mug that spells out "winnah"! 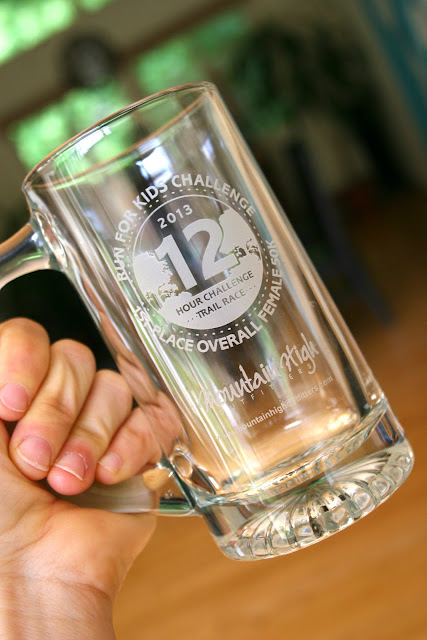 And my gym buddy gave me some post-race flowers too. Seriously, you can't outnice some people. 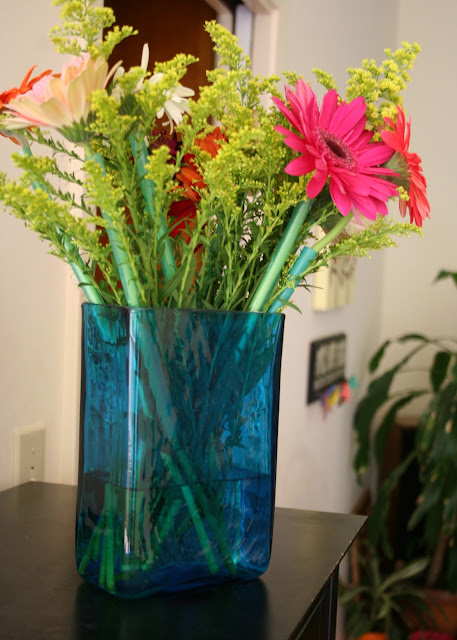 Post-race: The best part of the post-race party was the grub. The race directors picked up giant Chipotle burritos for us. I was in some serious food heaven after this race. Whoever came up with that plan is a genius with whom I always want to brainstorm from now until forever.

Also, I got to chat it up with some of the other 50K folks (most all of the 10Kers were long gone, and the 12-hour kids were a long time from finishing). I finally put together that my friend Wade is the creator of a local running group called Norm's Gnomes, which I wanted to be a part of ever since I saw that they had this shirt. 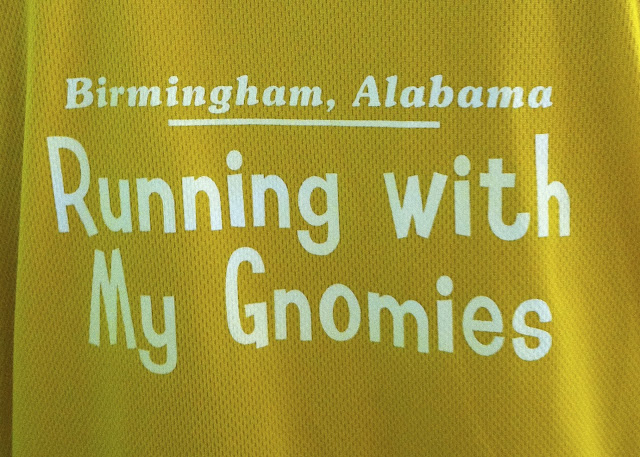 And there is an actual gnome that goes to races and lets people rub his belly just like Buddha (or Budai) for good luck. I guess we'll see if it works at Choccolocco 50K next month. 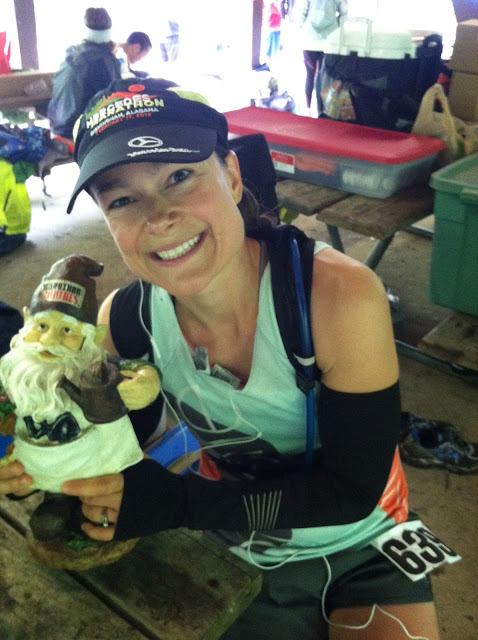 Swag: The shirts for the race were gender specific from Salomon. 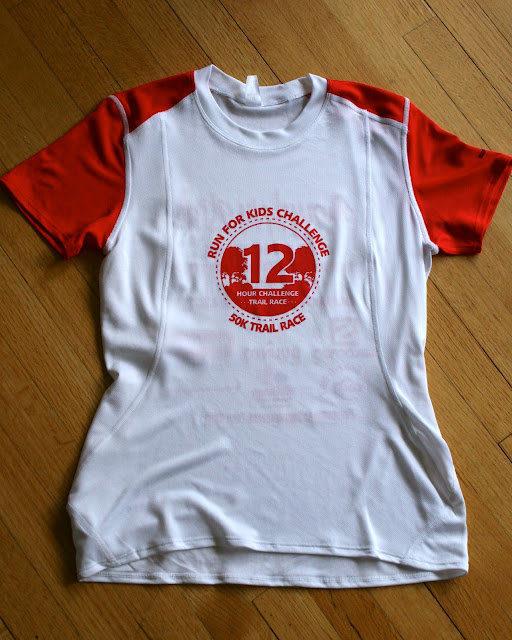 At the finish, they gave you a finisher's cup. Not to be confused with the winnah mug above. I should never have to buy glasses again. 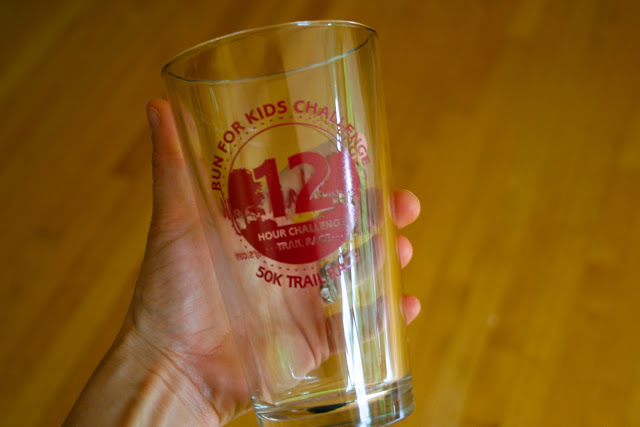 Special thanks: David Christy comes out to so many of our local races and takes pictures for us, and he let's us use them for free! Thank you so much, David!

The volunteers at this race were awesome too. Ali and Michael (below) were a great cheering crew on every lap, and Michael coached me along the whole race, giving me advice and encouragement every time I looped around.

And finally, thanks to Marye Jo and David Tosch, who are officially the happiest race directors on the planet.

Overall: Perfect 50K for a training run or a first-time 50Ker. The easier elevation makes this one accessible to all, and I liked being able to chat with lots of folks around the loop. The race directors provide great snacks during and after the race. Plus they're raising money for a really great cause!
Posted by Unknown at 6:00 AM