What not to forget on race morning

Take a stroll back in time with me to two weekends ago when my husband was out of town for the weekend and I was scheduled to run a 14-mile race at Oak Mountain State Park.

My brother so kindly agreed that he would come over with his son and do a state park play date while I had my date with the trails. In case you need a summary, that's one adult, four 4 year olds (they brought an extra friend), one 8 year old, and one nine year old -- totaling six kids under age 9. He should have won some kind of award for that.

All I had to do for that morning was get the kids up, which is not usually a problem until I actually want them to wake up on a certain morning. Then we had to eat breakfast, brush teeth, get in the car, and verify that everyone had shoes. I can't tell you the number of times (and the increasing scale of annoyance) we have arrived at a destination to discover that one or more of the kids failed to secure shoes before getting into the car. And I'm not talking about the 4 year olds!

So we're partially washed, fully fed, and all in the car by 6:50 a.m., which means that we'll be at the park at least 30 minutes before the race starts. I wanted to leave by 6:30, but with four kids in tow, I'll take it. As we pulled up to the race start, some of my kids were already trying to jump out of the moving vehicle (excitement over being at a state park?), and I'm already convinced that it will be a really long day.

As I parked the car in the grass on the side of the road and opened the door to stretch my legs before my run, I looked down at my sandal-clad feet and realized that one of my worst running nightmares just came true. The trail shoes that I meant to grab from the garage on my way out were still collecting dust in the same spot on the garage floor. I forgot my shoes!!!

Race morning or in route to a race is one of the few times that I develop OCD. I have stopped my car on the side of the road, walked around to the trunk, and unzipped a suitcase just to touch my shoes and verify that they were in there. This is after touching them three times before I left the house.

Forgetting my shoes at home is my racing nightmare.

My crap-I-forgot-my-shoes options: call my brother, who is already running behind, to stop by and pick them up for me; run barefoot; drive home and guarantee that I will be late; or wear some shoes from the Salomon rep who is just now setting up his tent.

My brother ended up zipping into the parking lot as we were lined up for the race start, so that would not have worked. There was definitely not enough time for me to make it home and back, and I've never run barefoot before, unless you count running around my yard as a kid.

I've sometimes wondered why reps come and bring shoes to races. Do people really wear those to test during a race? Isn't wearing new shoes that one thing you don't want to do at a race? Well, I take it all back. Please keep coming to races, shoe reps! The Salomon guy saved my day with his shoe testing tent and the Sense Mantra that I laced up in for the race. 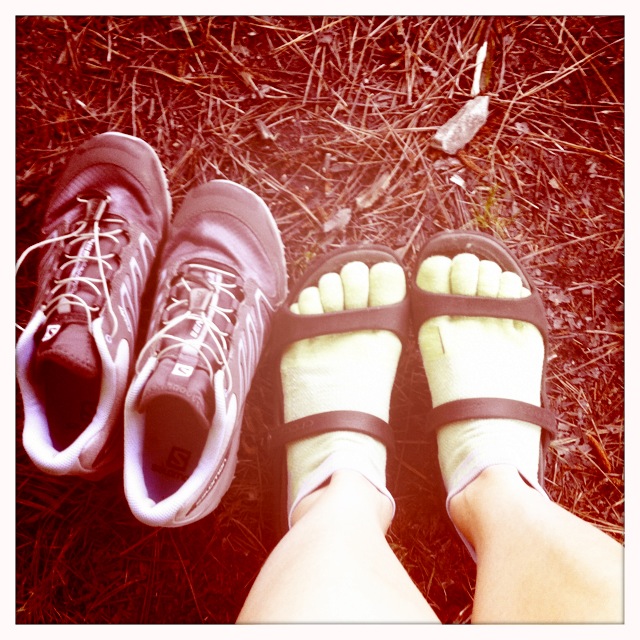 Because I knew that my brother would have his hands full during the race, I decided to cut my distance to the 7-mile race that was running at the same time. The 14-miler was actually just two loops of the 7-miler.

The course: We started off running around the road to spread out a bit before heading into the woods. As soon as we got into the woods, we were climbing, climbing, climbing. For the bulk of this race, you're either headed straight up or straight down. This is a great course to practice hill climbs and descents on, so if you're looking for about a 7-mile hill route at Oak Mountain, check this one out.

From what I gather from the Oak Mountain regulars, David Tosch, the race director, had cleared out a lot of the weeds and brush before the race so that the trails were clear for us on race morning. The weather was pretty mild that morning too, which combined with the shading to keep us from overheating. I'm not expecting the same weather-wise at the next race in this series: Hotter N' Hell on July 27th.

Because it is a tough, also tough to get to, loop, they only had an aid station at the start. They told us in preparatory race emails to bring our own fluids for the course. The 14-milers got to pass the aid station once, and the 7-milers got to refresh at the end. They had pb&j, Hammer gels, chips, drinks, cookies (which my kids stole a million of), and more.

My race: I really wanted to win this race because winning meant that I had a chance to win a pair of shoes. They drew between the overall male and female winners of each distance, so if I won, I had a 50% chance to win some new shoes.

My goal for climbing the hills was to really put some power in my climbing. My brother reminded me during my worst race ever that even though I was walking, I didn't have to just do a slow pathetic walk. Walking fast makes a difference in your time! So I decided to apply that to my walking during trail races too. There are times when you will inevitably need to hike, but try and make it a speedy hike.

Then on the downhills, I just tried not to fall. I actually ended up turning sideways for some of the steepest descents because I could get more solid footing underneath myself that way. I've never really done that sideways running before, but those were some pretty intense drop-offs.

My final time was 1:03:08, which put me in first place for the women and fourth overall.


Plus I could relieve my brother of kid duty earlier than if I had run the loop again. Double super buzz. That's a Jesco White reference BTW.


Even though, I was back early from not doing the second loop, I stuck around while they played some more so that I could wait for that shoe drawing.

While waiting, I got to see some fellow BUTS cross the finish line.


Swag: They gave all of the finishers that day a medal. 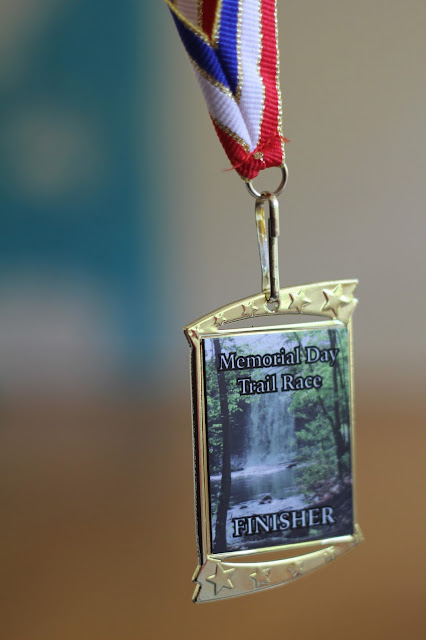 Plus we got shirts at packet pick-up. 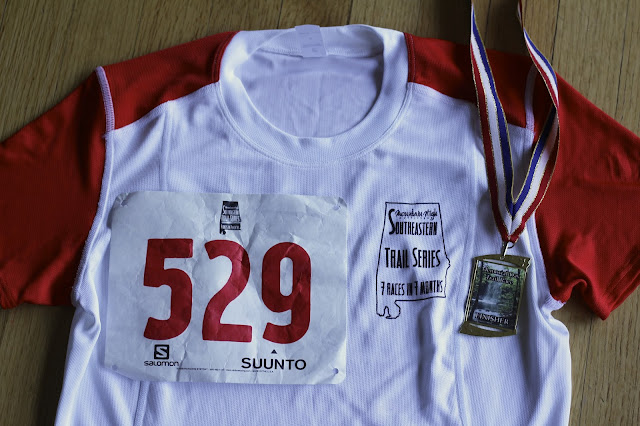 They also gave us some Salomon bags with handles and reflective stripes. This is a swag bag that I actually am reusing all the time. 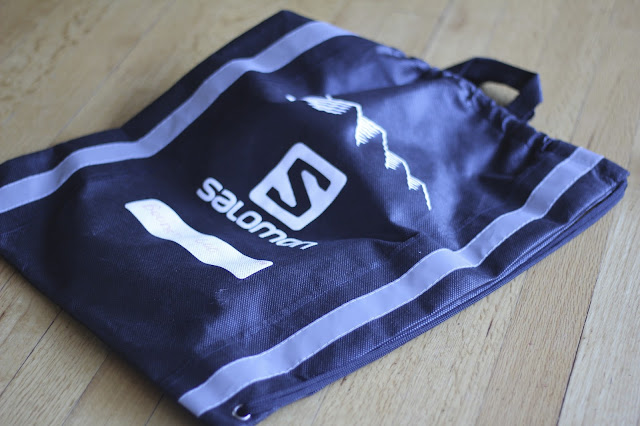 And I won the shoe drawing! So I ordered some of the Sense Mantras that I wore that day. I'll let you know how they work out.

Overview: The Memorial Day Trail Race is another great race in the Southeastern Trail Series. The course was my favorite of the series so far. A great challenge, and you might just get lucky with some mild weather.
Posted by Unknown at 1:37 PM