Days since my last run: five.

How much I care: zero.

We're having so much fun hiking and swimming in more parks than Mr. T has gold chains. So, you know, a good amount but not too crazy. And because of all the fun times, I really haven't noticed the no running thing, except that I've been sleeping in every day, so I'm possibly more well rested.

We are currently on our trip home from California, and my sister is hitting the road with me. Since she just got married, we're calling it our honeymoon trip. Don't worry, she's been together with her now-husband for ten years, and they have a 7-year-old daughter. They're saving up their honeymoon-ness for their biannual trip to Japan.

If you are getting tired of travelogues, come back to the blog in a week or so. Until then, welcome to part million of our cross country trip: the final leg before Los Angeles. Yes, I'm rewinding.

After the crush I had on Santa Fe, I had a hard time breaking away from New Mexico, so we stretched out our time there like some banana Laffy Taffy, longer but not Slinky long. We actually reversed course for a day to hit up some historic spots around Santa Fe before heading back down to Phoenix, AZ.

First stop of the day: El Santuario De Chimayo in Chimayo, NM. The sanctuary is built on the site of the miracle of the crucifix of Our Lord of Esquipulas, and it's also the site of a small pit of holy dirt that people believe possesses healing powers. It's a popular pilgrimage site for believers.

In general, not the best stop for rambunctious four-year-old twins, but it was peaceful. Plus I really enjoyed the Native American rendering of the Last Supper (see pic below). And we now have holy dirt inside of a Christmas ornament that we purchased from the gift store. Hopefully we won't have to crack it open, but we have it just in case.

After spending a lot of time shushing our kids at the holy site above, we pushed on to another site that required an equal amount of shushing and restraining of small children: Taos Pueblo.

Not part of our next stop, but I thought this city sign, that we passed on the way to Taos, was really cool. Any idea what that is made of? It looks like bones, but unless they unearthed some dino bones recently, probably not. 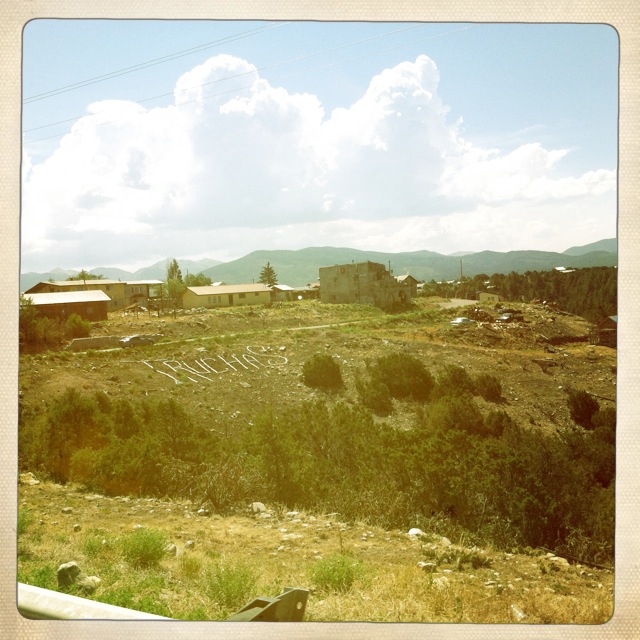 Amory has a special connection to Taos because he built houses there the first summer after we met. I was in Russia that summer, so he would write me letters that he had to drive many miles (at the time I was sure he exaggerated the number to prove his love for me) just to deliver them at the distant post office. When he drove me far out to the houses he built (and they're still standing!), I started to believe his stories. BTW, he wrote me twice a week for the whole year and a half that I was in Russia. That's part of how I learned that he was a solid dude.

Moving on to Taos Pueblo, a 1,000-year-old pueblo where they still operate without electricity and running water. Honestly, this place didn't really match my expectations. No disrespect to the people living there, who I know need to make money to live, but it's like paying an entry fee to walk around someone's yard that also doubles as a strip mall. It's $10 per adult to enter and $6 to take in a camera for pics, which is really the only activity that you can do inside. Although our kids tried to make climbing on ancient holy artifacts one of the activities, and we found out that surprisingly (kidding) that is not cool. 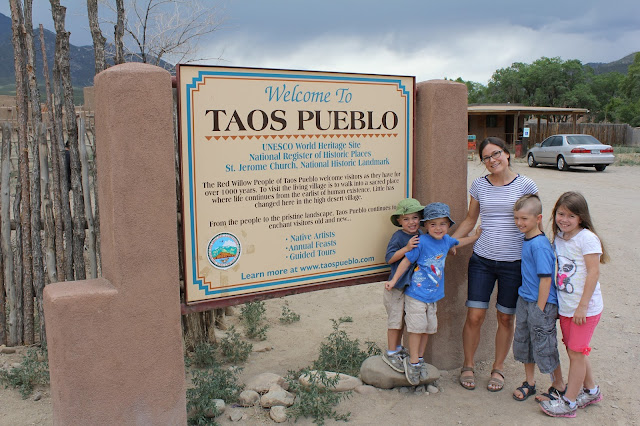 The only buildings that you can enter are the church and the shops that line the interior of the village. For some reason I thought it was going to be like Williamsburg, VA, where you go into houses and people show you how they lived in the olden days. No, it is not. It's still cool to see the multi-storied adobe houses from the exterior, and the stream running through the village was peaceful -- but overall just not what I expected, especially for the entry fee. 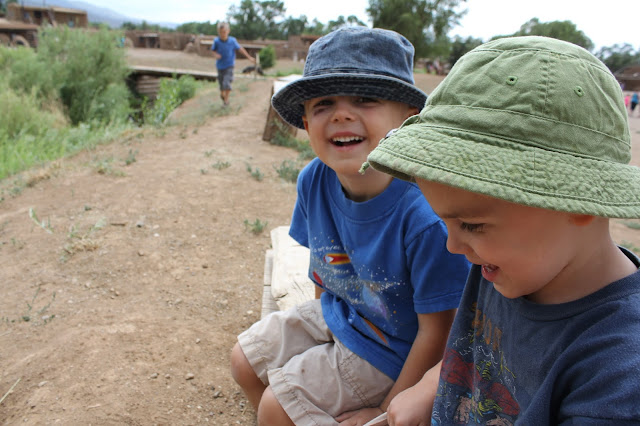 I found a few too many souvenirs at the shops: turquoise earrings, a wedding drum for my sister and her husband, a corn necklace for my niece, a carved stone coyote charm for my daughter, and a drum Christmas ornament. I'm blaming the massive (for a road trip with an already packed car) number of purchases on the fact that shopping was pretty much the main/only activity there. 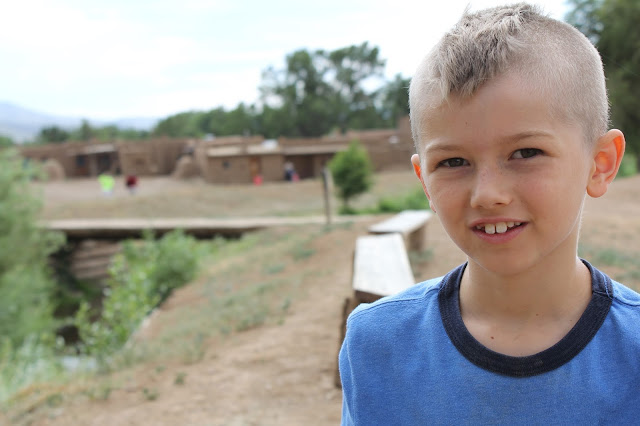 And we took a bazillion pictures because, by george, we paid $6 to take pictures, so we were going to make the most of having a camera. 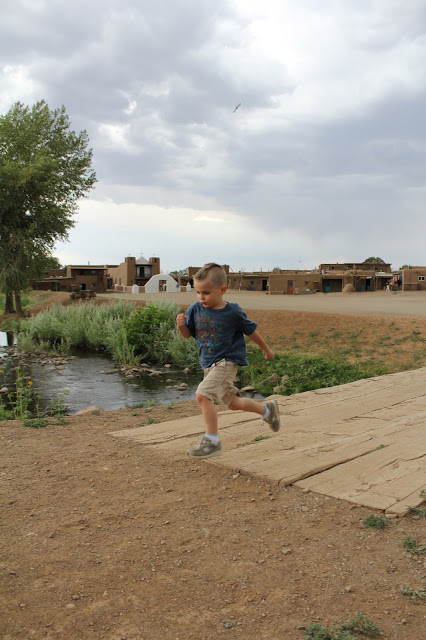 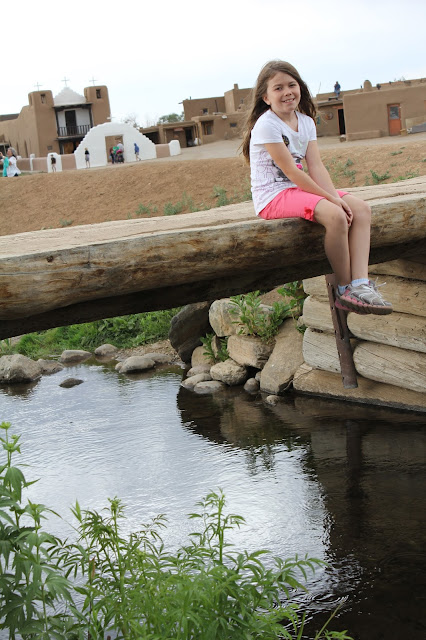 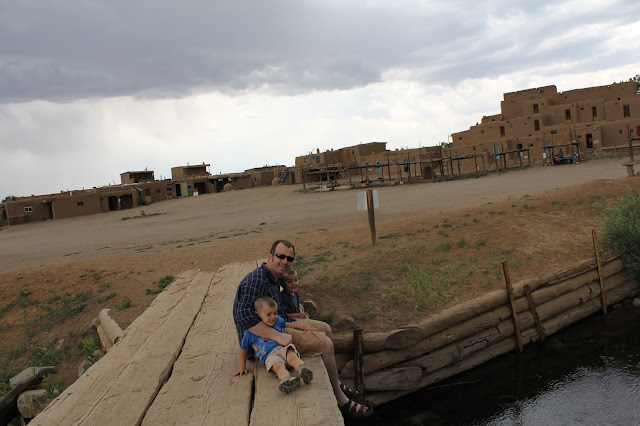 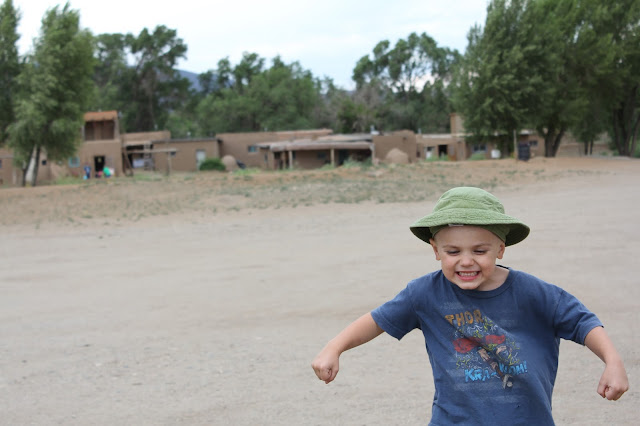 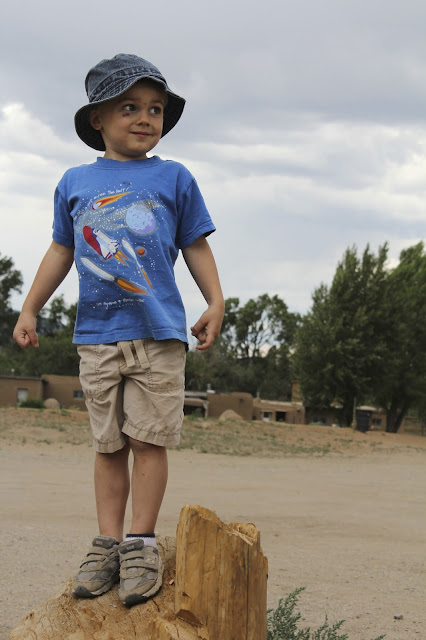 We picked El Malpais as our final stop in New Mexico. The draw: sandstone bluffs and lava fields. Entry is free. 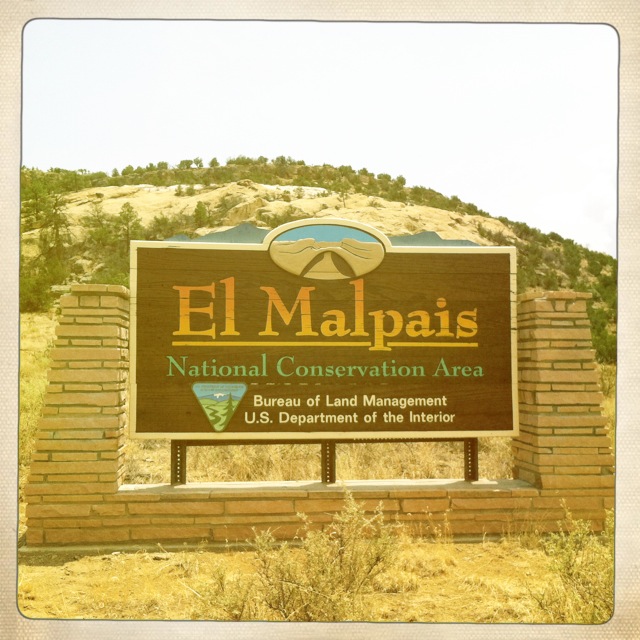 Being afraid of heights in general, I was highly uncomfortable with my kids running free on the sandstone bluffs. 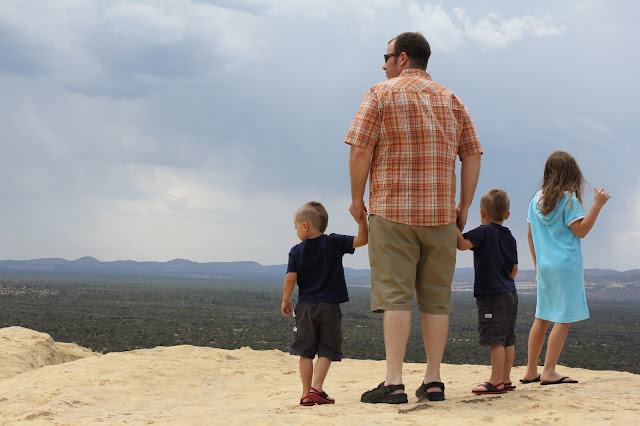 Amory was much more relaxed about it and encouraged our kids to take pictures like the cliffhanger one below. I am dying just looking at this. 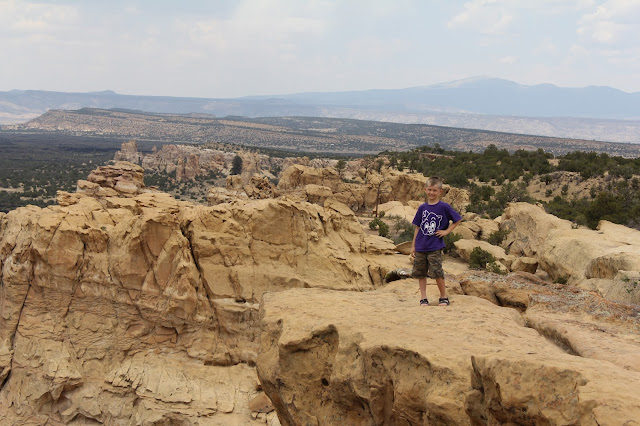 I tried to replicate my son's picture to prove that I was just as brave. When Amory told me to step closer to the edge for the picture, I just shakily shimmied my right leg out as you see it below. Does that count as a step? Also, you can see in this pic that my right hand is not quite relaxed in case I need to drop and cling to rocks when a gentle wind blows. 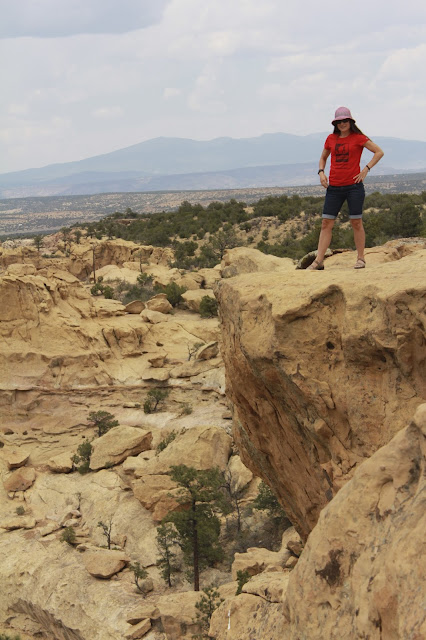 And this is one of those trick pictures, where you act like you're brave enough to leap around on sandstone bluffs, but really you just peed your pants.

I was happy to get to the solid ground at the lava fields. 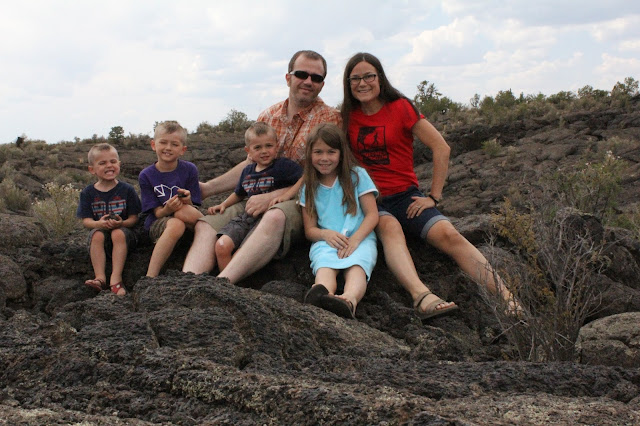 After being on the road for several days, we were more than ecstatic to get to Amory's brother's house in Phoenix, AZ. The youngest of their six kids is turning 15 soon, and the four kids who are still at home are so sweet to our little kiddos. It's always a blast to hang out with them and my awesome sister-in-law. Plus, huge bonus, one of Amory's sisters lives there too, as well as another adult niece and her family. Lots and lots of fun family time potential.

And who wouldn't have fun with a sword fighting Dorothy in their midst? 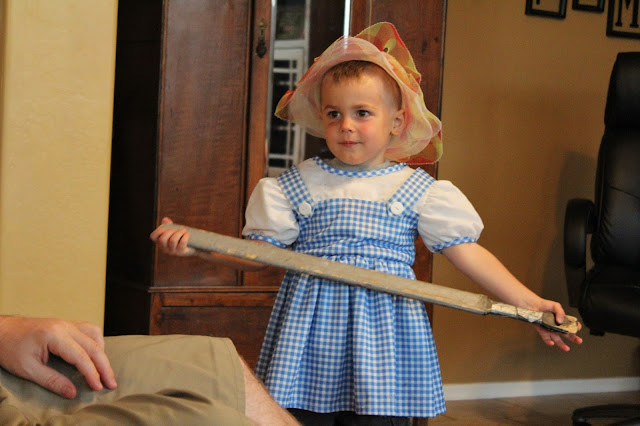 Or a sword fighting viking cheerleader? 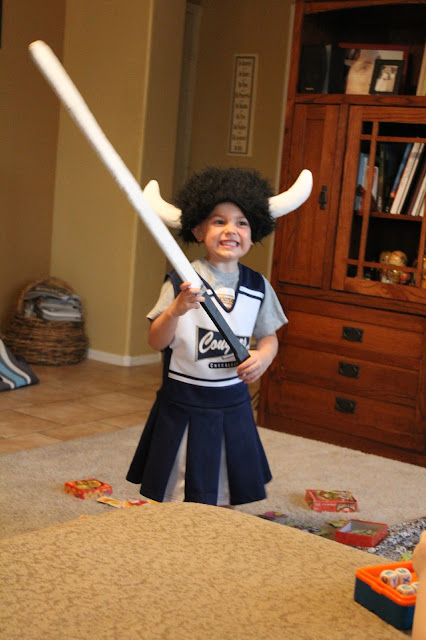 Plus my brother-in-law took me for a beautiful Phoenix run down a canal path. You can see why we were sad to leave them!

Our next and final stop before Los Angeles was the underwhelming Joshua Tree National Park in California. I can't really give this park a fair review because we were so bored and hot by the time we got to the entrance, that we turned around. Entry is $15 per car. 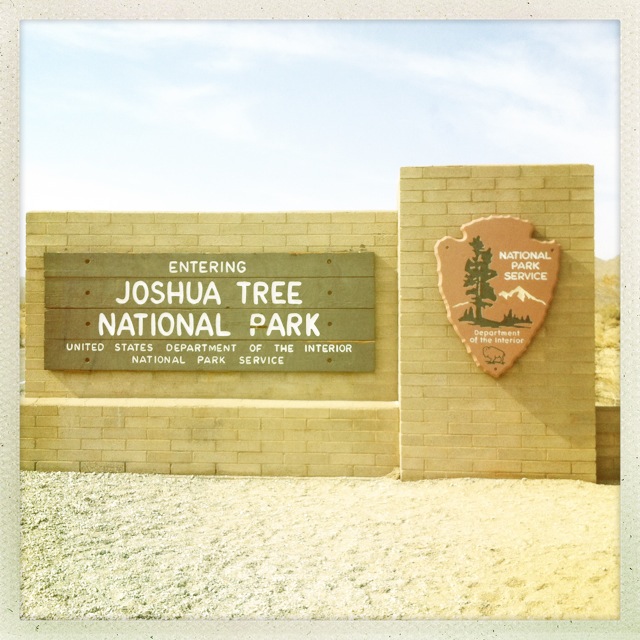 On the way to the park entrance, there was a lot of what you see in the picture below, except just imagine more boring. Somehow we found a slightly interesting looking spot for this pic. Do not get the wrong idea. Maybe it just takes a lot more time than we had to adequately explore it. Anyone know? My sister says there is good star watching and that we should have driven in further to actually see joshua trees. 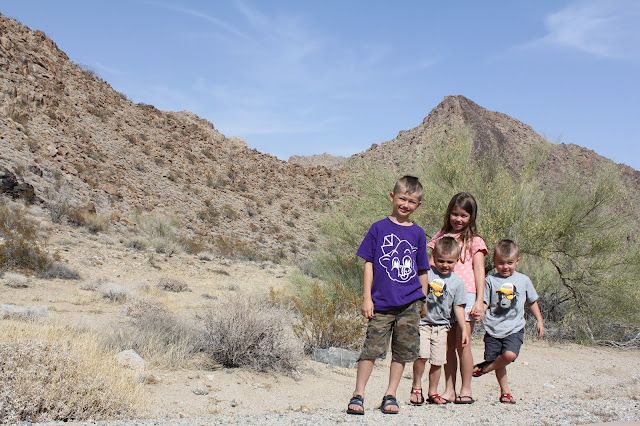 Here are a few more highlights from our trip.

Favorite thing to do at side-of-the-road pit stops: jump around. That and pee in the bushes. 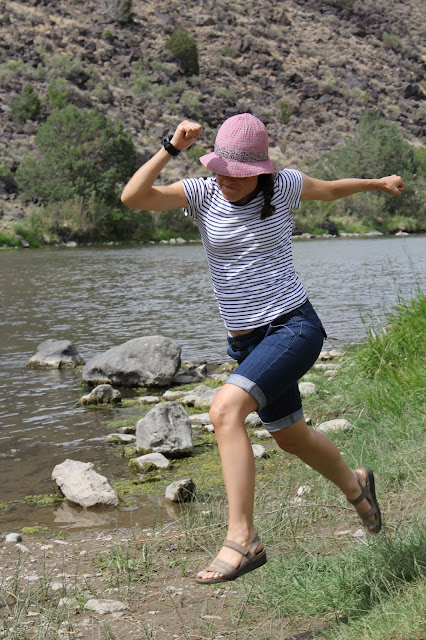 Hottest temps on the trip: 114. Crayons and chapsticks are not safe in car interiors. 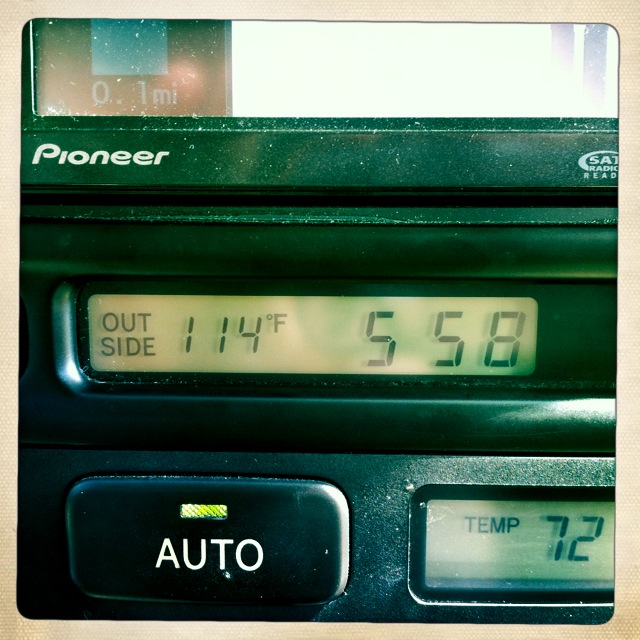 Best billboard: Jesus. Not, Jesus loves you. Or, You'd have hell to pay without Jesus. Just straight up Jesus. 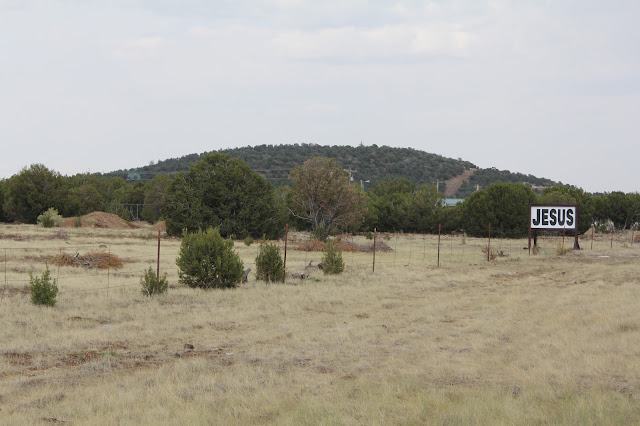 What's the best billboard you've ever seen? Or seen recently?

Heights: freak you out or give you an great adrenaline rush? My brother Jimmy is a mountain climber, and I still don't get how he does it. I am just so terrified by them. Sky diving is the lowest thing on my must-do-in-this-lifetime list.
Posted by Yo Momma Runs at 11:58 PM