While Los Angeles is the land of Hollywood stars, freeways instead of interstates, Inglewood being up to no good, and sunny-all-day-every-day weather, the biggest reason to drive over 2,000 miles to get there was to see my sister get married.

This was a low-key wedding with only a few guests, who pretty much all participated in the wedding, so it was easier to keep costs in check. But I was still super impressed with just how inexpensively she pulled off this wedding. For less than $500, she had a refreshingly simple and beautiful wedding ceremony that is etched into the forever part of my memory (unless I get pregnant, then I forget everything).

Want to get some ideas on how you can pull this off today? Keep reading!

Dress: zero dollars. Found in a plastic bin in the garage. We think that it's possibly a vintage ballet costume. 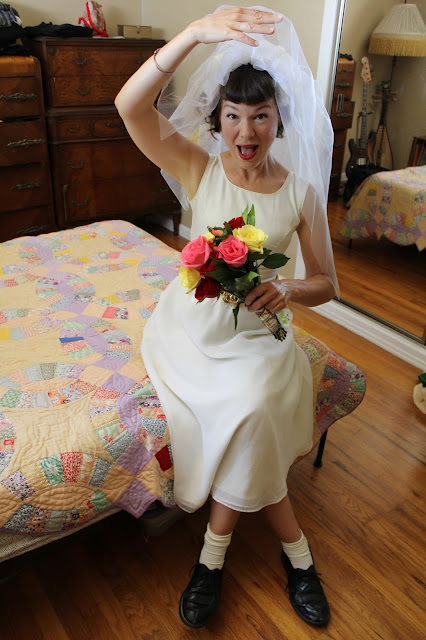 Belt: zero dollars. It's also a vintage belt that has been hanging in my sister's closet for years. This was actually her first time ever wearing it. You can see the detail in the beading a little better in these pictures from the afterparty. 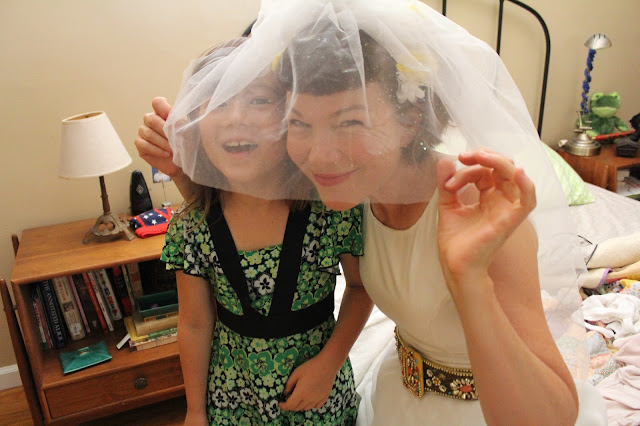 Flowers: $70. The morning of the wedding we biked over to Trader Joe's, where we purchased flowers for the bride bouquet, bridesmaid bouquets, boutonnieres, and for wedding decorations. We used some ribbon found around the house to tie the flowers together for the bouquets.


Other decorations: zero dollars. We used paper flowers leftover from a Mexican Halloween offrenda (here's a paper flower tutorial). The stage used during the ceremony was an already-owned flatfoot dance board. The black iron music lyre was a birthday gift from fifteen years ago, and the gazebo that housed the ceremony was free from someone's garage clean-out. The chairs were found on the side of the road last year. 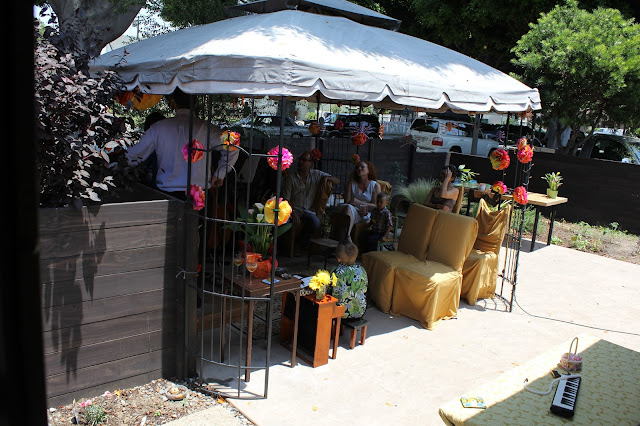 Venue: zero dollars. They used their front yard, which was perfect because it already housed a gazebo and provided for some drop-in guests from the neighborhood and even a drop-in bridesmaid.

Refreshments: $7.99 plus some donated. This total includes $2.99 for the saltwater taffy purchased for the twins to throw on the aisle. So instead of flower girls, we had taffy boys. They also spent $5 on peanut crackers to tame the waiting children pre-wedding. The peach komubucha for the toast during the ceremony was homemade by my sister-in-law, and the tiramisu was homemade by her Italian husband. Note: it was the best tiramisu of my life.

Charm bracelets (instead of rings): $15. They purchased matching charm bracelets for the whole family, including their seven-year-old daughter. 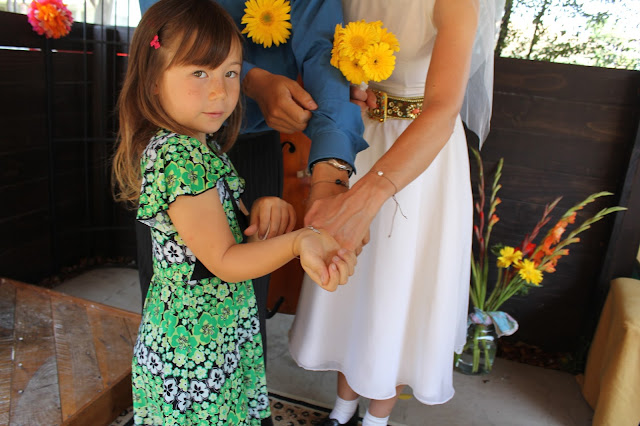 
Lunch: $200. After the wedding, we paraded the whole wedding party over to the City Tavern in Culver City for lunch. By "paraded," I mean that we took all the leftover taffy and threw it, or handed it, to everyone who did (or didn't) make eye contact with us. For lunch, we had eight adults (one who was juice fasting -- that's so California) and five children eating. The worst part: no kid menu for the five kids. But that was canceled out by the restaurant bringing out a gratuitous birthday-style dessert for the new couple to share. Then we sang, "Happy Wedding Day to You." 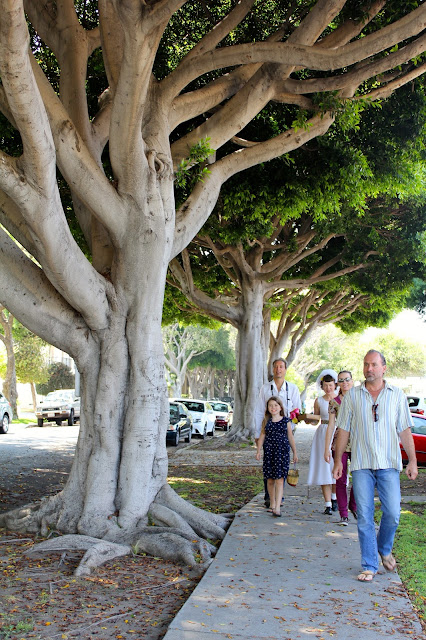 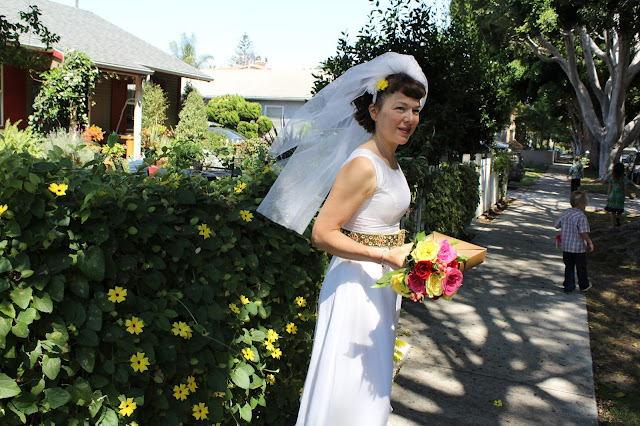 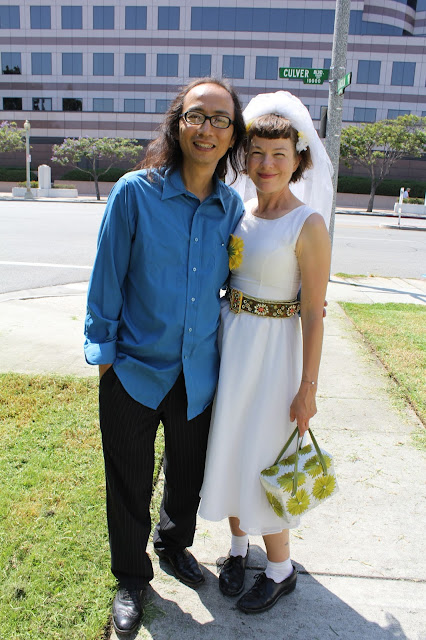 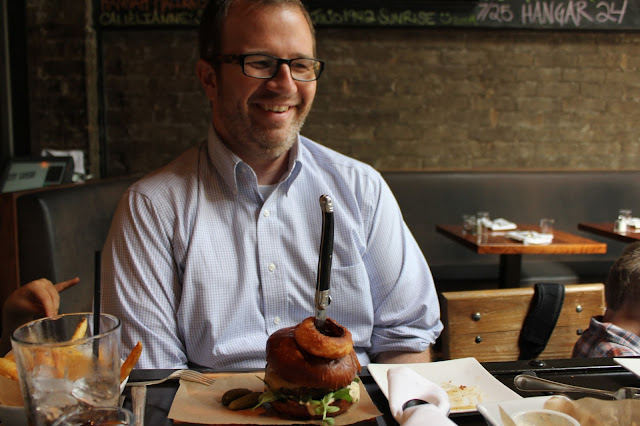 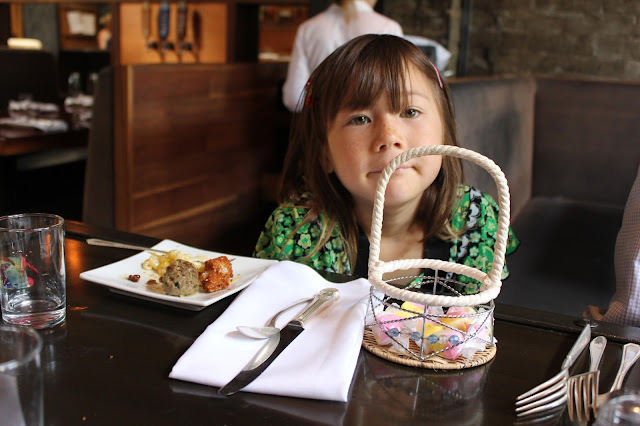 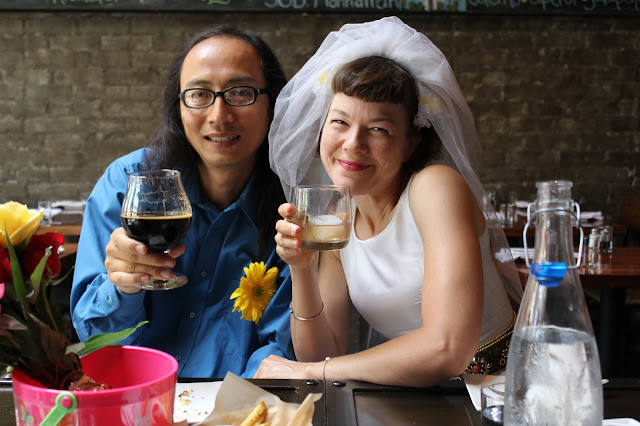 Musical entertainment: zero dollars. Bella and Enoch both played pre-wedding piano pieces, and Mary played a pre-wedding pianica solo. June, my new brother-in-law, played the upright bass while my sister walked down the aisle, and he played it while she flatfooted after the ceremony. Instead of "you may now kiss the bride," they got the "you may now mutually drop a beat" version. 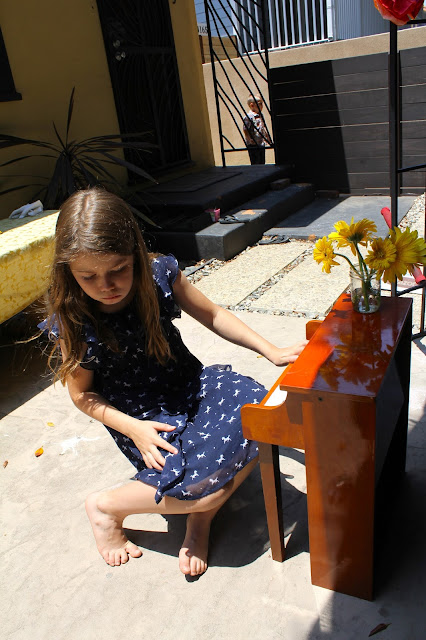 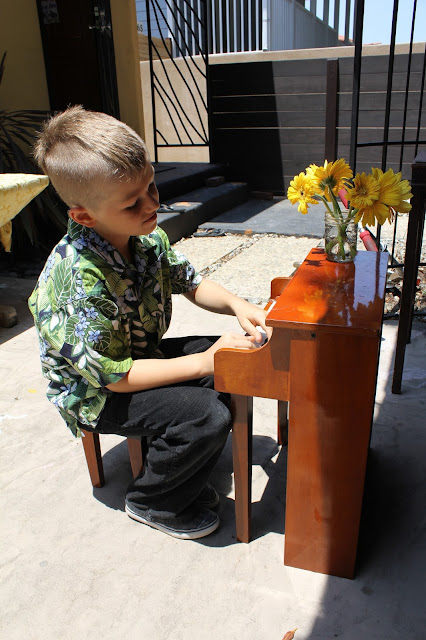 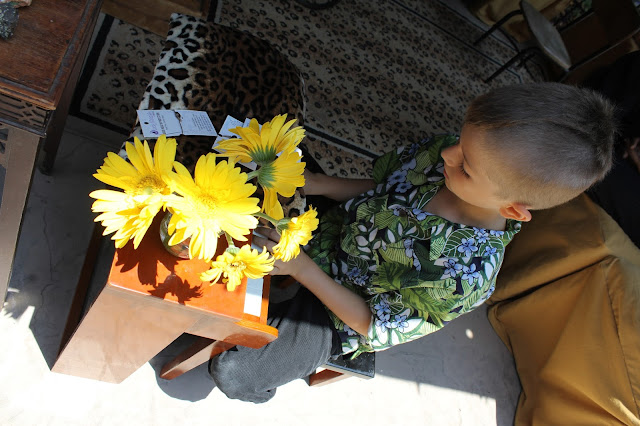 Photos: zero dollars. Courtesy of yo momma and yo sister-in-law.

Minister: zero dollars. My husband got ordained to marry them by www.churchofweddings.com (I made that up, but it was some type of dot com). You can also pay a small fee and get a one-day certificate to marry people in California.

Groom's clothes: zero dollars. Picked from the closet that morning. 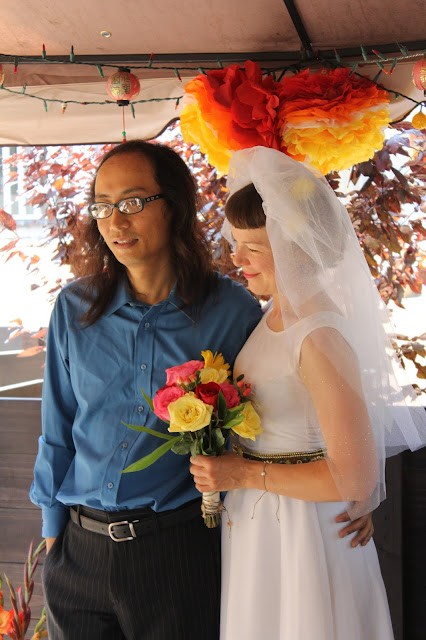 Post-wedding block party: $65. The block party was a July 4th party hosted by a friend in West Adams. The $65 was for a bounce house that my sister rented for the kids. There were several bounce houses along the block, pretty much every kids dream come true. Also at the block party: music (we brought a collection of instruments to share), flatfoot dancing, street dancing, fireworks, lots of friends, and the mother load of food. 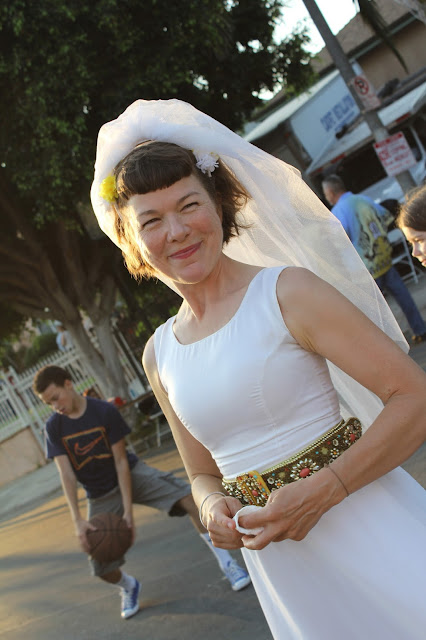 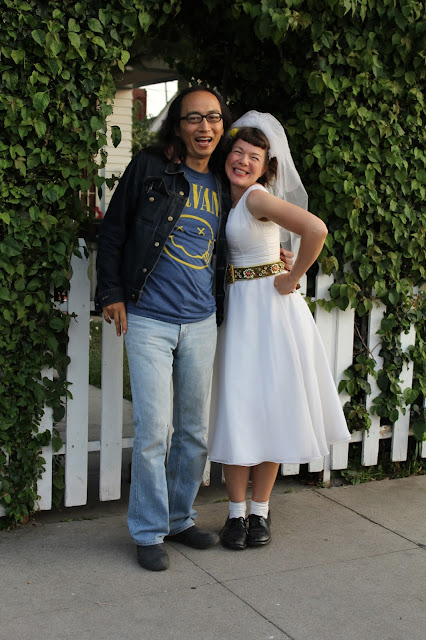 Other highlights: During the ceremony, Bella got up and read this poem by Walt Whitman.

This is what you shall do; Love the earth and sun and the animals, despise riches, give alms to every one that asks, stand up for the stupid and crazy, devote your income and labor to others, hate tyrants, argue not concerning God, have patience and indulgence toward the people, take off your hat to nothing known or unknown or to any man or number of men, go freely with powerful uneducated persons and with the young and with the mothers of families, read these leaves in the open air every season of every year of your life, re-examine all you have been told at school or church or in any book, dismiss whatever insults your own soul, and your very flesh shall be a great poem and have the richest fluency not only in its words but in the silent lines of its lips and face and between the lashes of your eyes and in every motion and joint of your body. 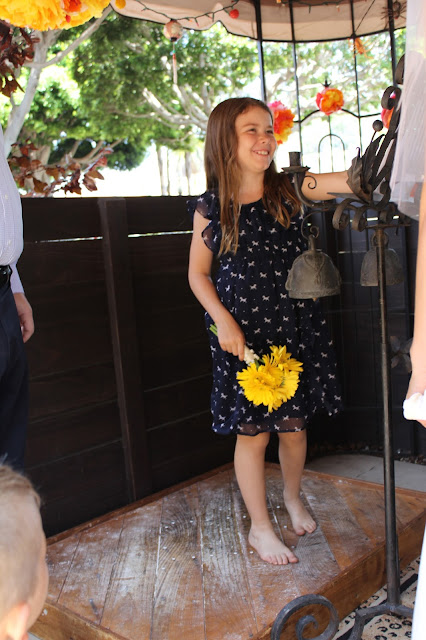 And in case those pics weren't enough, here are a few more of my favorites. 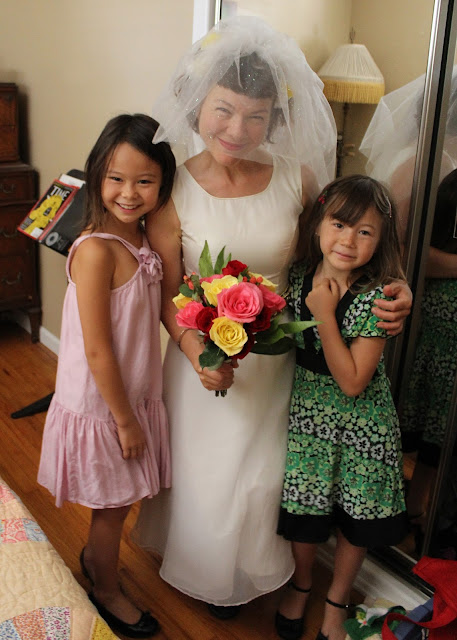 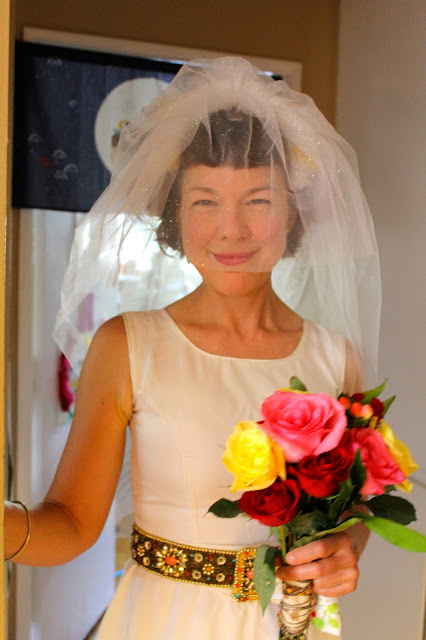 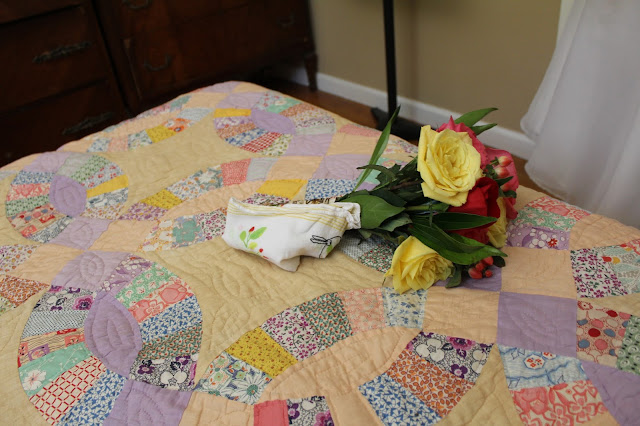 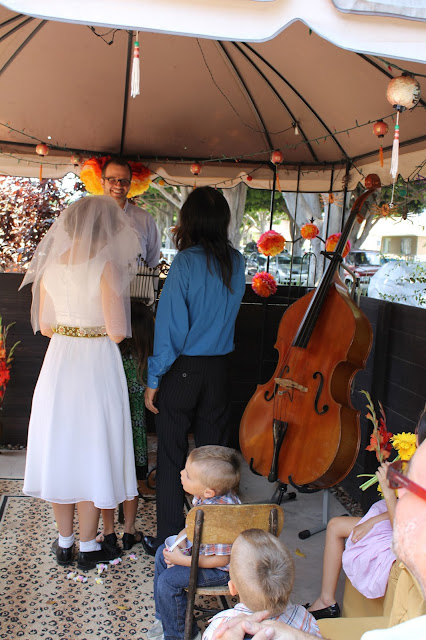 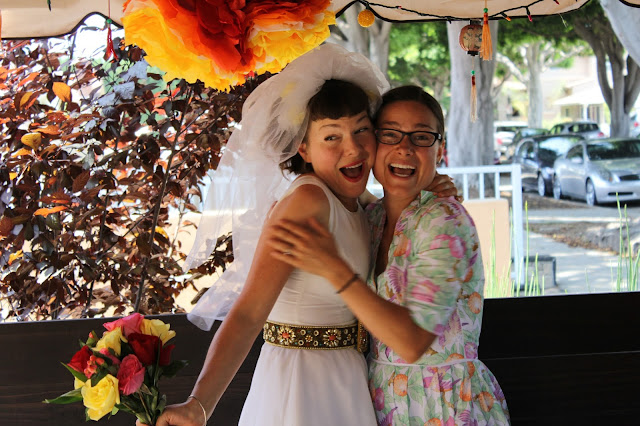 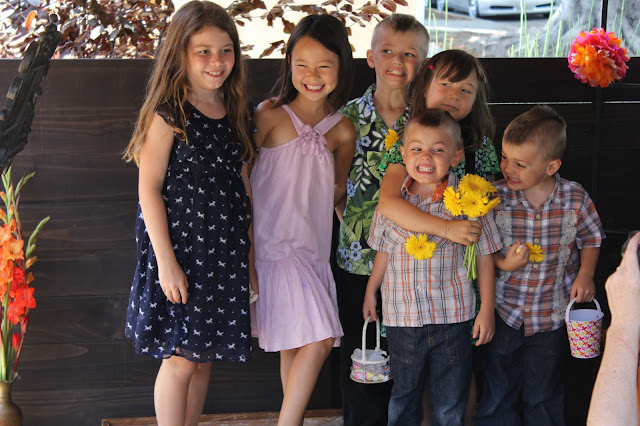 You may not be able to find your wedding dress in a bin in the garage like my sister, but there are so many ways to make the day cost less without losing any of the love that's there between friends and family.

And to wrap this post up, I want to send all my love out to my sister through the Interwebs. She is an amazingly talented mother, musician, dancer, friend, and now wife, and I'm constantly inspired to strive for more because of her example. Words just aren't enough to tell her how much it means to me to have her as my sister. I love you, Becky Boo!
Posted by Unknown at 9:48 AM