Do you ever finish a run and wonder why people aren't lined up to give you high fives and throw snacks at you? When I finished my long run at the gym yesterday, nobody even seemed to notice how well I held my gag reflex for the last two miles, and definitely nobody cared that I woke up at 4:50 a.m. to start that run, just to continue it after I took a break to get the older kids ready and off to school. By the time I restarted, it was hot, and I was running in my hilly neighborhood where I thought I could make a six-mile loop without carrying water (mistake!). Oh, and I ate a full breakfast after the first segment of the run, and that breakfast was just the thing to trigger that gag reflex I mentioned earlier.


When I went back to the gym to finish the last five miles of the 18-mile run, not even a single person realized that I was down to the minute on my childcare limit for the twins, so those last two miles were miraculously fast (not in real time, but in because-I-feel-like-crap time). 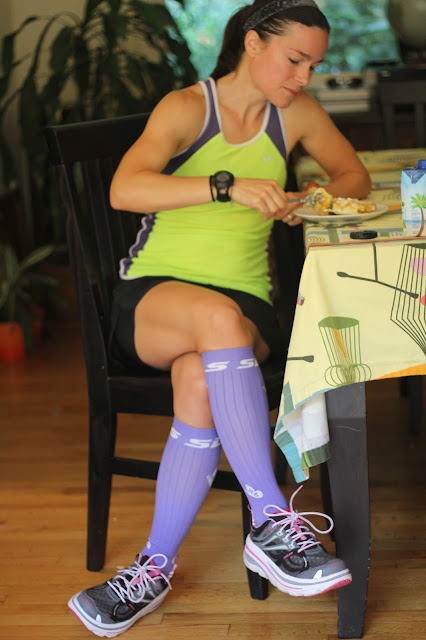 And I did all of that wearing the ugliest (but I still love them) shoes ever invented.

Even though I had running partners (thanks, Jimmy and Michael) for the first 13 of those miles today, there was something weird about ending a long run by myself and not having anyone to talk to about it. I wanted to do a happy dance (except my legs were too stiff from the long run) and sing a song about how I felt crapster and then happy and then crapster again, but I finished!!!! And doesn't everyone in my line of sight right now get how important that is?! Especially right in that moment when you finish something that just 30 minutes ago you had convinced yourself was impossible and had been an inch from quitting at least twenty times. Anyone care at all? Anyone, anyone? Nope, no one, nobody. Everyone at the gym just kept about their regular gym business of squatting and bench pressing, while I had just witnessed my own personal running miracle.

When you're with people who also just ran 18 miles under tough circumstances (or when the tough circumstance was that you felt like crud), you might talk for a second about the actual run, but there is that silent camaraderie and shared heck-yes-we-dids for finishing a challenging run. I know a lot of you are great at running solo, and there is definitely a reflective quality in solo running that I sometimes enjoy. But I need/really want running buddies to give a round of high fives to at the end of a long run, to observe just how gross the circumstances of the run were (even if they weren't, we can exaggerate to make ourselves feel tougher), and to excitedly plan the next torture session.

So next time you are running by yourself and you do something that you want to shout to the oblivious-of-your-awesomeness world, just know that there are others of us runners out there silently rejoicing and imaginary high-fiving with you.
Posted by Yo Momma Runs at 10:15 AM