Yes, it's that time of year when threadbare backpacks and lunch boxes get traded in for a fresh new set, with colors still vibrant and unmarred by sticky after-lunch hands or by muddy streaks from being dragged down the sidewalk on those especially hot and exhausting afternoon shuffles to the carpool line. It usually takes about a week for the I-love-this-lunchbox-so-much-I-want-to-marry-it phase to turn into the where-did-I-put-it/oops-I-left-it-full-of-food-and-in-the-hot-car-all-night phase. And that, folks, is how sassy new lunch boxes turn into the moldy ones of years past.

We did a surprisingly small amount of back-to-school shopping, including a quick trip to Old Navy for my daughter (which doubled as her late-July birthday present) and an even quicker trip to Nordstrom Rack for shoes for my son.

These Spiderman shoes at Nordstrom for $29 caught his eye and wouldn't let it go. As a third grader, this is probably one of the last years that he will get this excited about shoes featuring a comic book character, which makes me sad when I think about it too long. 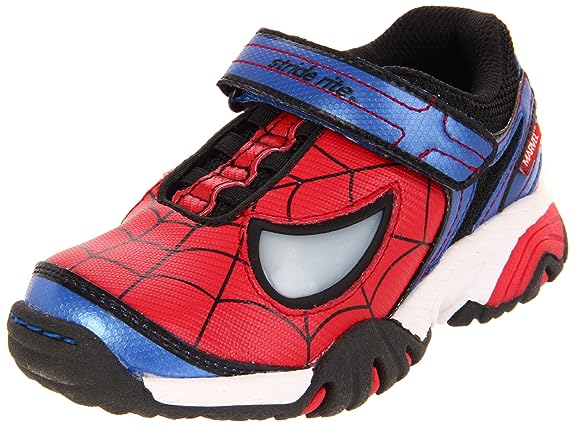 Normally I don't like paying that much for kids shoes, but I decided to give it a shot because every year we buy a pair of shoes on the clearance rack at Target that turn grubby and start falling apart after a few weeks. Fingers crossed that Stride Rite made a slightly higher quality shoe that will last longer for the higher price. Plus I bought a size up so that he can wear them for an extra week (exaggerating -- but the little dude is rapidly growing).

I "accidentally" wandered into the women's clearance section where they had some Brooks PureFlow for $35. 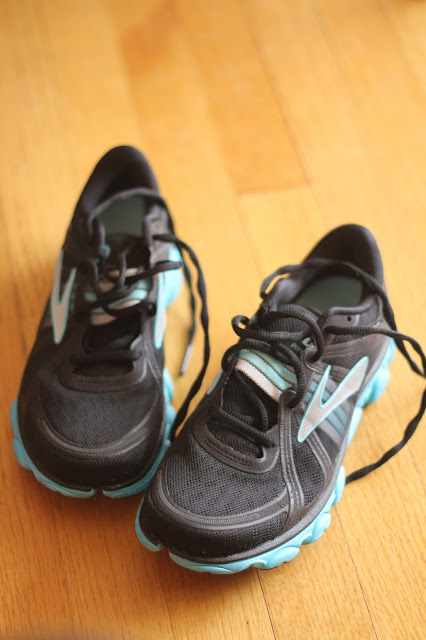 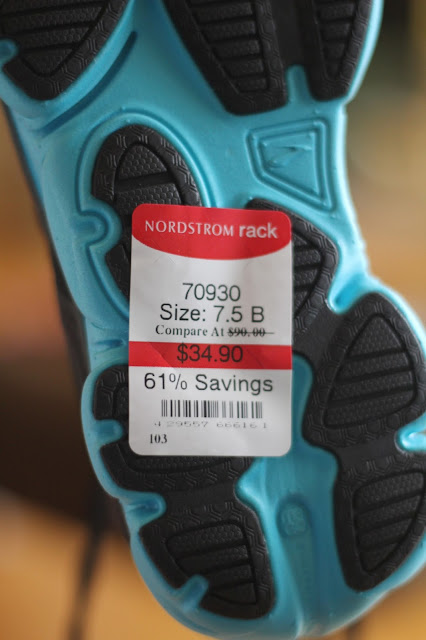 Since I recently tested and loved the Brooks Cascadia 8 for trails, I thought I would give these a shot. Any PureFlow lovers out there? Haters? There are a lot of Birmingham runners (and just regular gym wearers) who swear by them, which is why I was up for giving them a shot.

On the topic of shoes.

The shoes by which I am most annoyed: Toms. 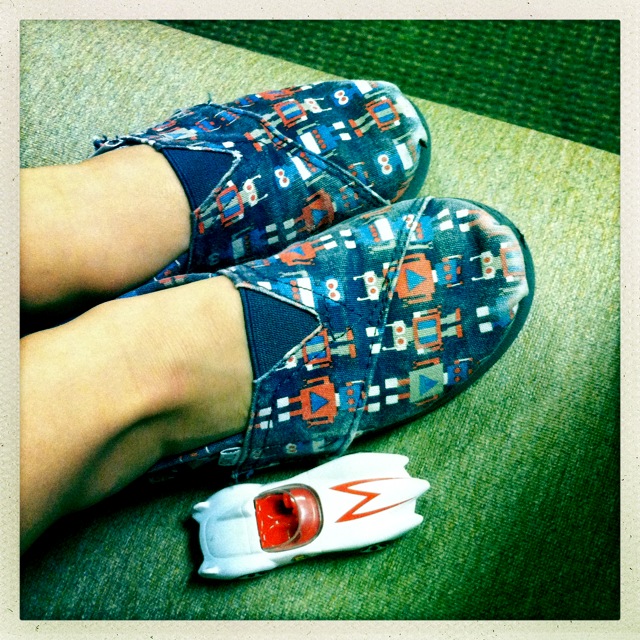 These shoes that look a century old above were only worn twice before this picture. Somehow we managed to avoid the whole Toms craze until a few weeks ago when I found these irresistible robot ones on sale for the twins. So cute, but they are the worst quality shoes for the money they are charging. How can you get away with making a shoe that fades that much after two wears? And people cannot get enough of them. Am I the only person on the planet that is so confused by this?

So did we actually go thrifting for any of our back-to-school purchases? Yes! We found this Puma Procat backpack (new with tags) at the thrift store for $8. 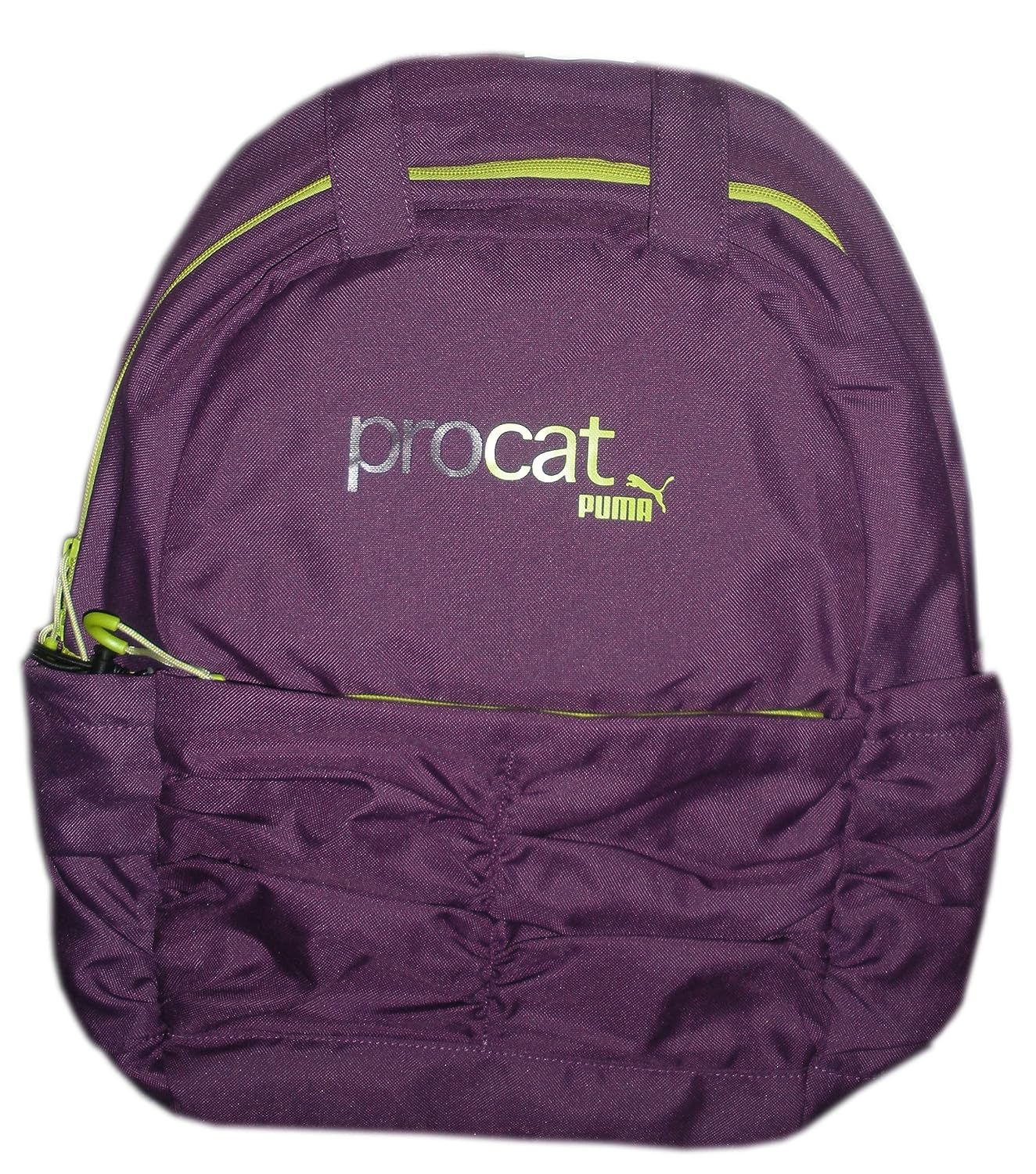 Not the best thrift store price, but considering it was new, I was happy about it.

We also found a handful of shirts for Enoch (my third grader), including a Battleship shirt that I knew he would love. You see, Battleship is one of his favorite games, even though his favorite move in the game is telling his opponent that he should try aiming higher or lower. Hint to Enoch: telling your opponent where to aim is not the best Battleship winning strategy.

If you squint your eyes (or close them) and look at this shirt, you will see it like I did in that hazy back room of the thrift store. I was so focused on the ships, that I didn't even read the message of the shirt before I threw it into the buggy (yes, that's what we call carts in Alabama) for immediate purchase. Luckily that day we were with our friends at the thrift store, and when I showed it to them (thinking I was probably the coolest, smartest thrifter ever for having found this shirt), they read the message out loud to me. 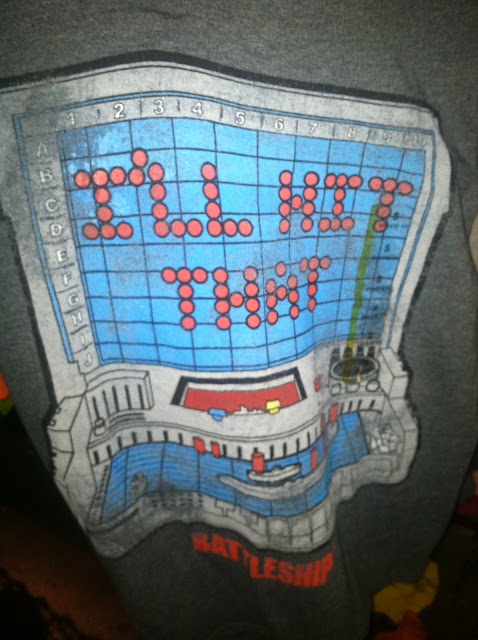 And that's why you always leave a note preview your thrift store purchases with a friend before making your final selection. I cannot believe I almost bought such a trashy shirt for my third grader without noticing, and secondly, I cannot believe that some manufacturer made a shirt saying I'll hit that in third-grader sizes. I die.

Back to good stuff, I found this vintage bedspread at an estate sale for $3, and I want to stare at it forever. I'm not sure I'll actually use it as a bedspread because I'm strongly considering cutting it up and making things out of it (like pillows and baby presents). But since marathon training really cuts into the minuscule amount of sewing time I had, it will remain an awesome vintage bedspread thrown over the back of a chair so I can stare at it. 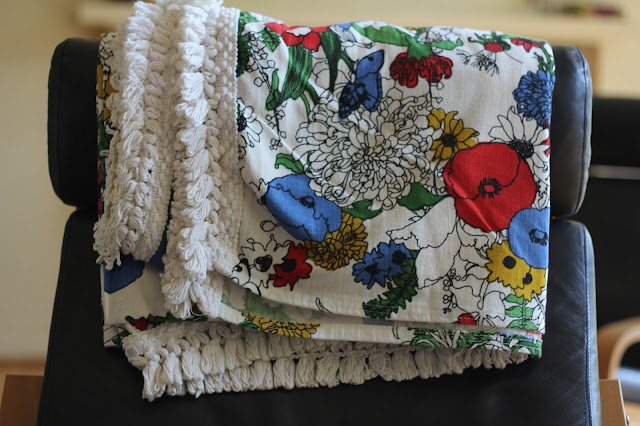 Are you a Brooks PureFlow fan? I still haven't taken them for a run. They are waiting on the sidelines to get a chance to enter the magic shoe rotation that I have going. Magic because (serious knock on wood) I'm currently not injured, and I thank my shoe rotation for that.

Where and what kind of shoes do you usually purchase for your kids? I couldn't pass up the $5 clearance Target tennis shoes for my daughter, but I'm glad we upped the budget for my son. He trashes everything so quickly that the quality can really make a difference in longevity of shoes for him.

What's up with age-INappropriate sexual references on shirts? Maybe it's just me, but I cringe whenever I see that. Like the adults are trying to make a joke out of innocent children. With all of the sexual abuse targeted at children going on around the world, it's really not funny to me at all.

Toms are the worst shoes ever created: yes or no? If no, please tell me which you would vote the Crappiest Shoes Ever Created.
Posted by Yo Momma Runs at 7:00 PM