Last week's training flew by, and I think it seemed easier than normal because I performed zero trail runs. I had one planned, and it got pushed to the side to accommodate car repairs that had to be finished before closing time.

Props to my husband who spent all weekend tearing one of our cars down, replacing a bunch of parts, and putting all of the pieces together again in the correct order. His car skills have never stopped amazing me. He hears a sound or feels something a little off in the steering. Then he googles a few things, orders a bucketload of parts, and starts ripping things apart. I guess I'm most amazed that he can put it all together again without some sort of manual with step-by-steps. We just did not grow up doing our own car repairs.

My dad taught me to check the oil if I was on a cross-country trip by myself, but that was it. And, yes, there were repercussions to this laissez-faire car repair style -- like the time my transmission locked in the middle of the interstate at midnight, right before some people on crack whizzed by us going 100+mph. We only knew they were on crack when they reversed it back to us almost as fast as they whizzed by us. They were checking on us, which seemed very ironic at the time. Moral of that story: oil is not the only important fluid in your car; transmission fluid also helps.

And to bring this back around to the point (it's in there somewhere), thank you, Amory, for growing up on a farm and learning how everything (and I mean everything) is put together so that one day you could save us thousands of dollars in car repair bills. Missing the trail run was minuscule compared to that.

1. 6 miles @8:48. Did this run on a treadmills, so it was easy to keep the pace. Still felt hard because the weekend before was rough with back-to-back trail runs, including the So Long Summer 15K trail race.

2. Planned 7 miles @9:07, actually ran 1 mile. So 7 miles was on the schedule, but since run club got rained out, I only ran one of the miles (so I could watch everyone else kick butt on the treadmills, which were all full). Letting this one go didn't hurt my feelings at all, my legs were dead from the weekend and felt like they needed a rest anyway.

3. Training with Mr. Mike, foam rolling (like a boss), and aqua bootcamp. Did I tell you guys that I also started teaching at our local Gold's Gym?! I just took over the Wednesday night aqua bootcamp, which we are switching to Thursday nights in September. Whatever you pictured aqua class to be like, throw that idea out the window. Unless your idea was that we kick major butt and work really hard. 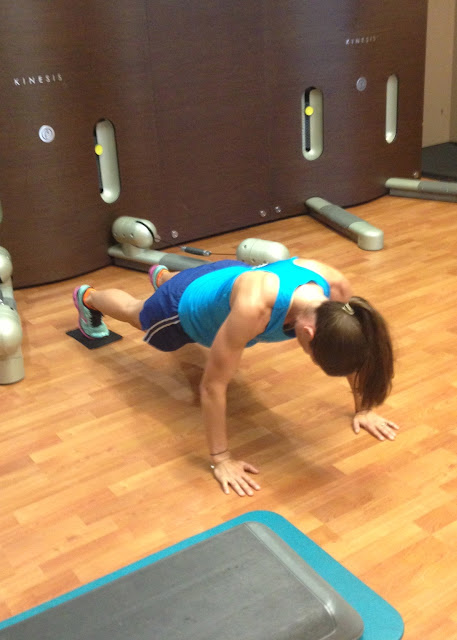 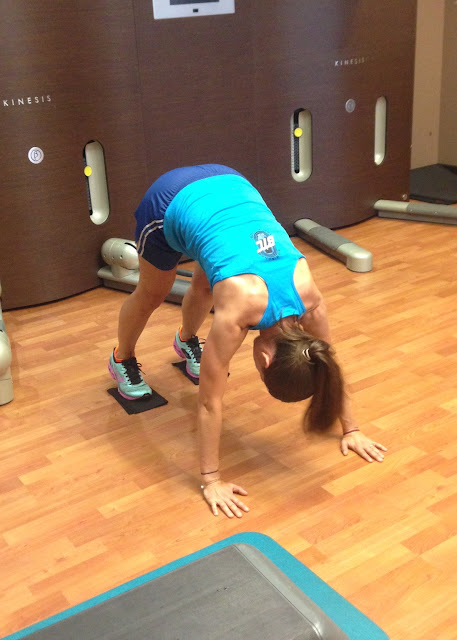 4. Speedwork on the tready, 4x1200 @ 7:03. That's the basic version of the speedwork. There were some rests and a 10-minute B-pace (8:48) "rest" in between two sets of the 1200s. I really loved this one, and I'm loving that our treadmills have a picture of a track so that I don't have to add numbers. So for these 1200s, I can just watch the dot on the track to go around three times back to the point it started. Not adding is always a good plan for me while running. Somehow it never works out. A couple of weeks ago, I tried to convince my coach that I ran 8.5 miles when I really only ran 6.25. He hadn't been running, and I had. That automatically makes him right. So basically, never trust the math skills of a person who is fully exerting themselves while running.

5. Rest day. Although I walked one mile on the treadmill beside the treadmill posse, who were all doing their long runs on Friday. Then I decided to ask Mr. Mike to race down the straight of the inside track. That planned turned out poorly, in that he beat me while running backwards.

Right after this pic was taken, he turned around backwards and ran to the end. And, no, I still couldn't catch up. I think it's his high knees, like Usain Bolt's. If you have Netflix, you can watch a documentary about Bolt on there. It's definitely entertaining, and the main thing I gleaned from it was that if you want to run fast, you have to pick up your darn knees. Is it just me, or are all distance runners not that great at picking up their knees?

6. 17 miles @9:35. Which turned into 17 miles @ 8:40. It's hard to hit certain paces out there because you just kind of fall into a group and do whatever they're doing. I ran these miles in my Hokas, which still feel like running on marshmallows.

The most important part of my long run is the post-run food. I picked up some gluten-free Rudi's bread on the way home. Publix had it on buy-one-get-one-free sale, which makes it much cheaper than normal. I need to stock up tonight before it goes off sale because it's not too bad tasting, and it works great for when you are just craving something that only bread can give you, like an egg sandwich.

7. Recovery miles 6 @ 9:55 and yoga. I took the recovery miles to the treadmill because I ended up doing them at night. A long time ago, my husband asked me not to run roads at night because he thought it wasn't safe, so I've tried to stick to that. I'm pretty into staying alive while running, so I thought it was a smart plan.

The twins' most creative exercise for the week was slithering around the aisles at church. 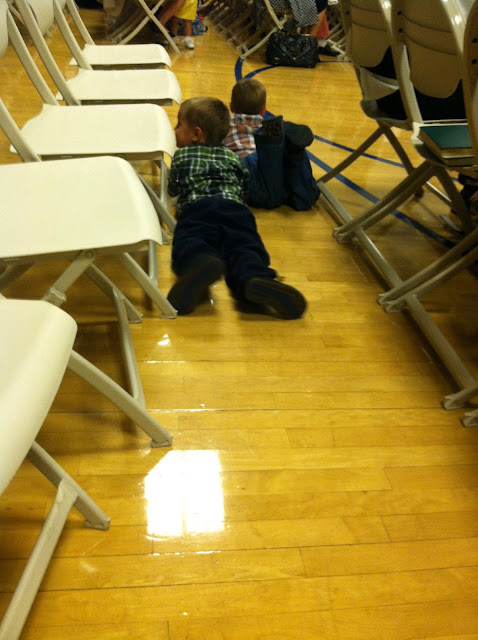 My new training plan has several recovery running days (running at slower paces), but only one real rest day from running. That's six days of running per week. I'm interested to see how my body responds to that, and I'll definitely be paying attention to anything that feels off. Plus I'm on an intense foam rolling and theracaning kick, like doing it almost every day. I think it's going to save me some future chiropractor visits.

How many days per week are you running right now? I was at five per week, which my body seemed to tolerate if I made a couple of those trail runs. I think my body would rebel if all of those were on pavement.

Favorite post-run snack right now? That sandwich started a new trend. Plus I always down a giant glass of tart cherry juice to help speed recovery.

Who's your favorite Olympian? I'll be honest that I really loved Pistorius, so I was totally thrown off by his being charged with murdering his girlfriend. Did not see that one coming at all. I loved Bolt too, even if he's pretty full of himself. Cockiness and all, he's an amazing athlete.

And if you haven't yet, go enter to win some Feetures socks here!
Posted by Yo Momma Runs at 4:48 PM