Like running? Like water? Like combining things you love and rolling them up into a juicy burrito of awesome? Then you should check out the Seven Bridges Marathon in Chattanooga, TN. Coming up on October 20th, Seven Bridges gives you a chance to explore the gorgeous water, hills (but mostly from a distance), and trees surrounding Chattanooga. I want to go to there.

This event is in its third year, so it's still a smaller race. Last year, there were over 400 finishers, and with a cool town like Chattanooga as the host(ess), my educated (read: obvious) guess is that that number is going to keep growing every year. 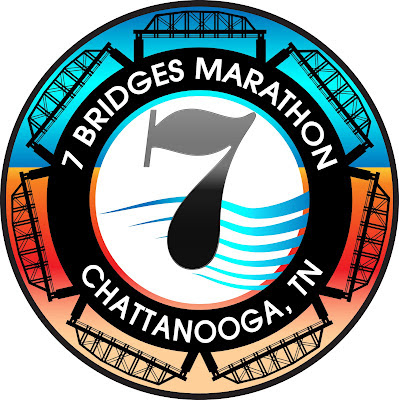 The swag looks legit too. I love the bridges on the ribbon, and well, orange is where it's at. So A+ on that one, y'all.

And about those hills. I don't see any climbs over 100 ft., and I'm guessing that those spikes correspond with bridges.

Living in Birmingham, we're only a couple of hours away from Chattanooga, and people here talk about Chattanooga as if it's the really cool big sister of Birmingham. Like, one day I'll be punk rock enough to dye my hair fire red and be in the recording studio all night with my band like my big sister. Except it's really like, one day I'll be metro enough to have an aquarium the size of a small city and a classic enough to have a song all about you written by the great Glenn Miller.

For more info about the race itself, check out these reviews. Last year one of my running buddies scored a huge PR there, and these are a few of his thoughts on the race.

Overall, I thought it was a fantastic race! The course is challenging but not as hilly as you'd think for the area. It was well organized for only being in its second year. The thing that really stood out to me was the scenery. Running along the river and over the bridges provided some great views of the river and the surrounding mountains. I also liked the novelty of running over that many bridges (including one over a dam)! The shirts and the medals were both nice. Chattanooga as a whole has a lot to offer. A vibrant city with so much to do! I would definitely do this race again.

So here's what I've got for you: a chance to win one of five entries into this race! You and your friends can all win and make it a road-trip-party-athon. And I'll have some extra race swag to mail to winners too. Just a little bonus with your win.

To enter: Leave a comment here or on my Facebook page (for the people who have blog commenting problems) telling me why you want to win. Is it for an awesome training run, redemption race, sightseeing adventure, or you just like punishing yourself by running marathons? Check your calendar first to make sure you can actually make it there on October 20th!

For bonus entries: These are completely optional! But if you do them, make sure to leave a separate comment for each so I can count them all.

I'll close this giveaway next Friday, Sept. 27th, to give you (and your four friends who win with you) enough time to plan your trip. Random.org will help me out with picking the winner.

Seven Bridges Marathon is providing the entries for this race. I was not compensated for this post.
Posted by Unknown at 10:57 AM