In case you didn't see the Facebook post, I got my Boston confirmation! Finally! I was feeling so nervous because several folks in my running group got their confirmations on Friday just a few hours after registering...except for me. They have to verify your time before they send out your confirmation, and I guess it's just slower verifying a smaller race like Mercedes. I could also just be totally making that up. Whatever it was, I was the last to know, but that didn't void my obnoxious excitement. With that email confirmation, it just got real real up in here. So real that I made hotel reservations.


It's a good thing they let me in because on the day I qualified (in February 2013) I went ahead and put it on the calendar for April 2014, which BTW equals a lot of scrolling through the calendar app. BQ problems. It was (and still probably is) my only solid plan as of now for 2014. 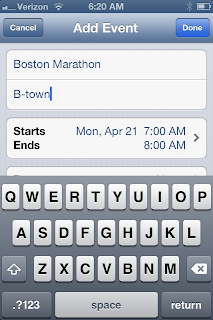 Ahh, the iphone memories of that week. 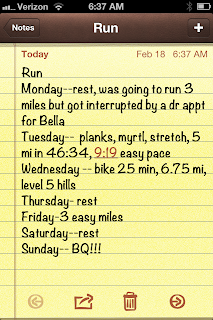 Turns out that between now and then, I've got some other cool (to me) goals in the mix.

This is my upcoming racing schedule, on which I'm trying so hard to limit myself to one race per month. That sounds like an easy goal, but I tell you that it's harder than it might seem. Because I won an entry into the Southeastern Trail Series, I have those races that I can run for free. Plus with the Alabama Outdoors run team, I can run the Alabama Outdoors trail series for free as well. So it's really hard to convince myself to pass up on free races, but family comes first. And to thank my husband for eagerly planning our Boston adventure in April, I'm trying to keep other running slightly chilled out. That's another reason that lately I've pushed some of my long runs to Friday, so I can create a better running/family balance.

So here's what's coming up:

Sept. 21, Carrera 5K, Birmingham, AL. This is an event that is sponsored by my husband's employer for the workers and their families and friends. Pretty cool, right?! So our whole family is in on this day together. And I think this is the only race that my husband cares about me running. Even though on most days he is totally bored/over my running, he really wants me to do this with (read: in place of!) him, and I'm definitely going to shoot for a 5K PR.

Sept. 27, 28, 29, Birmingham Stage Race, 53 miles total. I'm going to go ahead and predict that this race will end up being closer to 60+ miles. This race director is quickly becoming well known for making extra challenging courses (and adding in bonus miles for our enjoyment). This will be my first stage race ever, so I'm focused on recovery, not racing each individual day, and staying healthy  in order to complete all three days.

Oct. 12, Crusher Ridge 63K, Ruffner Mountain, AL. This is the point in my race schedule where I begin to question my sanity. This equals 39 trail miles, which will be a distance record for me. My plan is to take it slow and easy and just finish!

Nov. 9, Savannah Marathon, Savannah, GA. So looking forward to this race. My first, and therefore my favorite, marathon. This race has become an annual tradition. Some friends from Gainesville, FL, come up with their families, and we all hang out for the weekend, with the race as our reason for coming. I think we're up to three people actually running this year. For the past two years, our ratios were struggling. Two out of the 24 people visiting were running. OK, so that includes kids too, but some of them are old enough to run. As a bonus, this year I'm pacing one of my BRFs (best running friends) in what will be her first ever marathon. I'm not sure if she's more excited or if I am.

Nov. 23, Tranquility Lake 50K, Oak Mountain, AL. This is the capstone event of the Southeastern Trail Series. The whole purpose of the series, other than to have a blast running and eat lots of food at the finish line, is to prepare someone to run a 50K, so each race builds on the previous distance, until you get all the way up to 50K. I love the concept!

Dec. 14, Coldwater Mountain 50K, Anniston, AL. I'm not sure if this race still exists because when I googled I found zero info, but at one point it was a thought and on a schedule that I saw somewhere. If I don't run this, I will gladly take December off.

Feb. 16, Mercedes Half Marathon, Birmingham, AL. My goal for this race is to be a Bell Runner, who raises money for the Bell Center, an early intervention center/program for kids with special needs. I don't plan to run more than the half marathon.

April 21, Boston Marathon, Boston, MA. As of right now the plan for this one is to have fun! No PR attempts, no gluing myself to my Garmin -- just run and enjoy the city and the people along the path to Boylston. And it looks like registration is already full for 2014. Because of the bombing last year, I think more people than ever are determined to support this event and show the world and crapster terrorists that we are strong and refuse to be bullied as a nation/city/running community. We're making a family road trip out of it, which means my family will be there to support me on the sidelines on race day, and my sister is still trying to plan her flat foot marathon to coincide with my finish. If you know any buck dancers, tap dancers, cloggers, or flat footers who would like to join her, please let me know!

Which race are you most looking forward to on your schedule? Of course, B-town because it's a once-in-a-lifetime thing.

Do you race every event you sign up for, or do you run some just for fun? I usually say I'm running for fun but can't get the racing bug out of my psyche on the run.

Have you ever run for a charity? Which one? This February will be a first for me, and I'm really excited to try and serve the community while I run. Running is all about me, me, me, so it will be nice to switch that focus.
Posted by Unknown at 6:00 AM