So there were a couple of races in between my last race report and this one that I never told you guys about. I know you're shaking your fist at the sky right now. Well, quick summary for you right here and now. The first of those two races was Hotter n' Hell 18 miler that wasn't necessarily hotter than hell, but it was harder than hell. I hadn't run much during my month long summer road trip, and this many trail miles was a pretty scary way to break my legs back into running. My quads were cramping up horribly which isn't normal for me. The calves are my usual go-to cramper. It was a double-loop course, and it was really hard not to stop after that first loop. So hard that I walked for about ten minutes before I decided that I wasn't going to turn around. 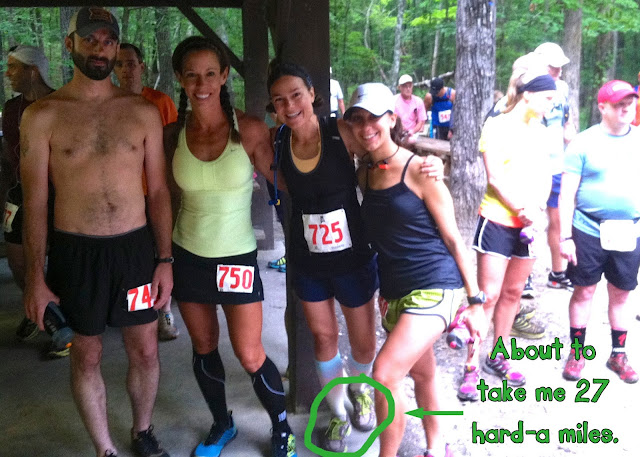 Here's what the 9-mile loop elevation looked like. I finished the 18 miles in 3:44. And just for a bonus, I hiked it a third time to help sweep the course post-race. Where these brilliant ideas come from, I don't know.

That elevation chart tells me that I freaking earned this medal and shirt. 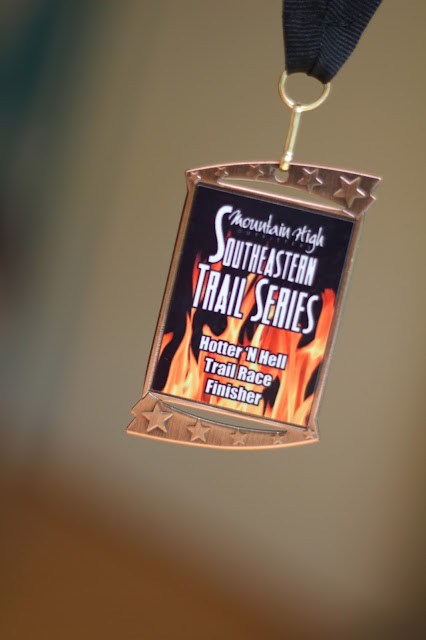 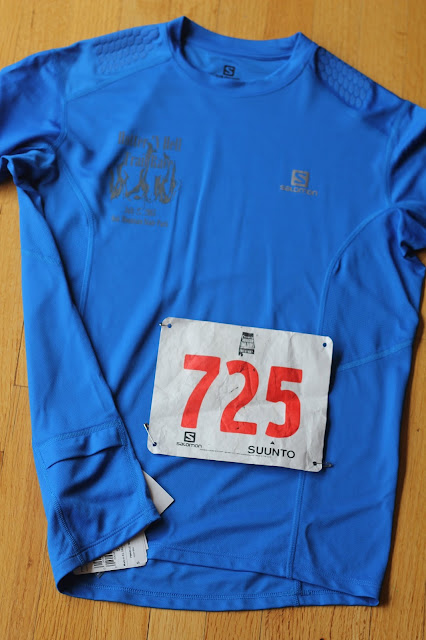 My next race went a bit better. August 10th was the Adios Summer 15K at Ruffner Mtn. Ruffner is known for eating unsuspecting trail runners alive. It's got brutal hills, rough terrain, and wild (read: poison ivy filled) brush. But for some reason, I've so far had great luck with my trail races there. For my second time ever, I came in first overall in my event. The first time was also at Ruffner. So weird.

I think it was due to Melissa's braiding skills. Also, thank heavenliness that I have had a haircut since then. My hair was getting out-of-control long, which equals hot. 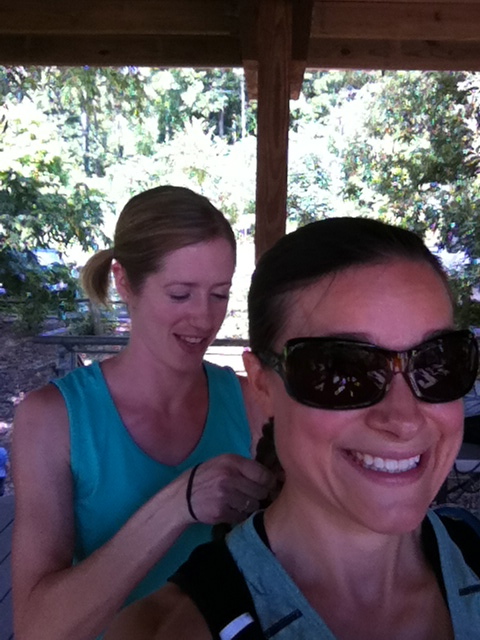 The best part of this race? No, not the hills. And why don't the hills look worse in this elevation chart? I swear they felt twice as high.

No, the best part was definitely the awards. Useable frying pans. Cannot beat a skillet for a prize. Ever. Don't even try. 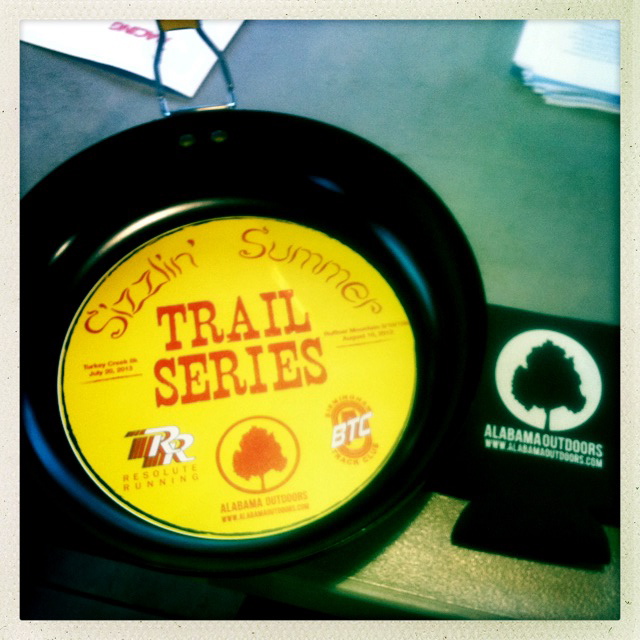 And here are some photos from the day that will speak a thousand words to you so that you don't have that much more to actually read.

So now to the hopeful finale of hot summer races -- meaning: please hurry up, fall weather. The temps for the September 8th Ridge to Ridge 20 Mile Race (actually 24 miles) reached 90, making it the hottest of these three races. That didn't stop a lot of sweaty folks from hitting the trails that day. Plus a lot of these people had just been out to the free trail race the day before this. We've got folks gearing up for the three-day, 60-mile stage race at the end of this month, myself included, so they're intent on making life tough for their legs in order to prep. 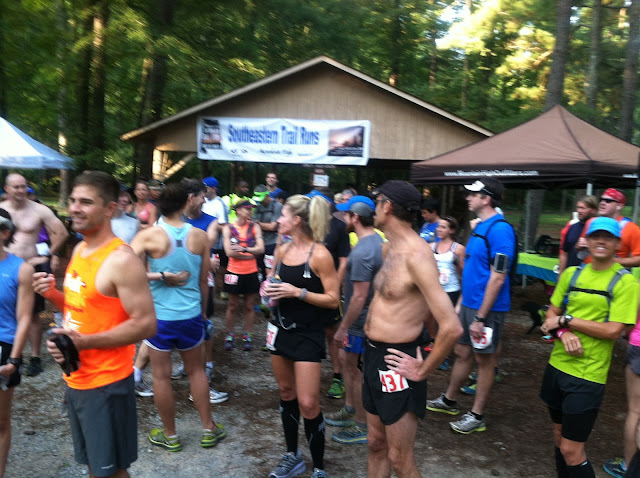 These hydration pack carriers had the right idea. There was an 8-mile gap between aid stations, which feels even more brutal in 90 degrees. 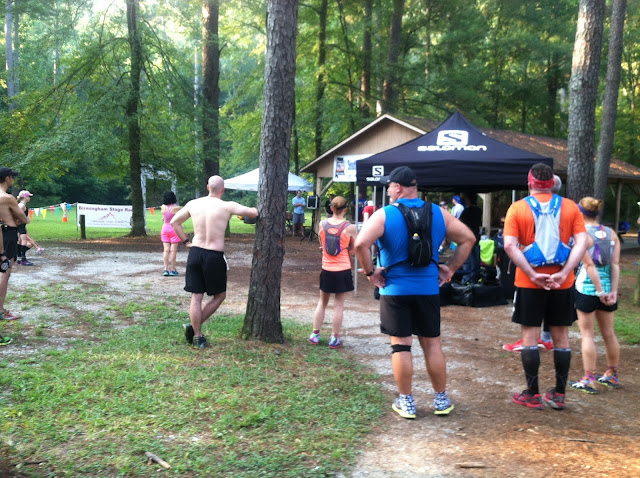 And I'm pretty sure that the race director takes special pride in finding the most challenging path between two points. He either loves or hates us all a lot to go to this much effort to make the hardest race possible.

At one point, I wasn't even sure if we were actually following a trail anymore because it just turned into the side of a mountain. If it weren't for the occasional blue flag, I would not have recognized this spot as a trail. Note: slippery pine straw and steep hillsides are not the best mix. 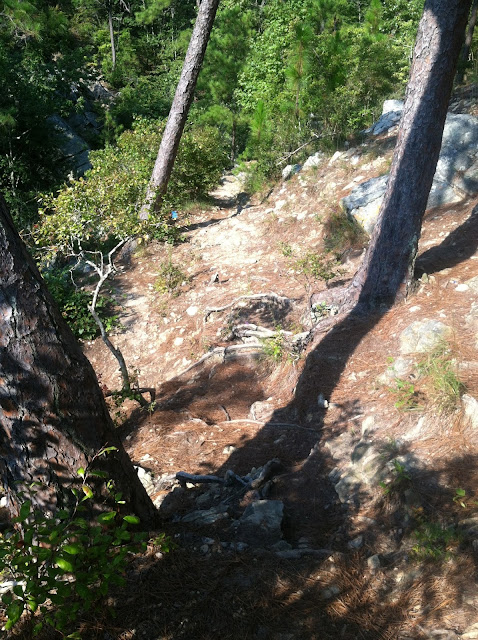 Then there was the brutal hike/run down into and up and out of the other side of the waterfall. We were all so happy to see the photographer on the steep climb out (frown smile).


For most of the first 10(or 12)-mile loop, we had a pretty long chain of runners going, and by the time we hit the second loop, most of the chain had dropped out. I think the main causes were heat and the extreme inclines and declines that were killing off legs/knees/quads. But mostly heat.


By the second loop, our numbers were fewer, but we were still pretty determined to make it a decent loop, or at least to finish. My trail pal, Michael, was using the day as a training run, so he stuck with me through both loops. Luckily he was there to lend me a little water when I ran out with a few miles left. Oops, guess I should have filled my pack up again at the 4-mile aid station, even though I thought it would last the whole loop like it had the first time around. Turns out that I was downing it quicker the second, hotter time around.

I was very slow moving up the steep climbs, and at the end of the race, I was talking to people who weren't there (I swear they were behind us at some point, and I just didn't realize that we lost them). The effects of the heat were definitely setting in, but Michael just kept chatting away like everything was totally fine, which helped me to focus on something besides the pain and desire to already be finished. There is usually a point in the long distances that I wonder what I was thinking signing up for this, but I keep coming back for the physical and mental challenge plus camaraderie of the other trail junkies. Oh, and we saw some deer bounding in front of us through the forest. So there's also that reason to come back for more.

But, man alive, I was happy to be finished. When am I going to learn that doing these moves after longer races causes serious cramp-age? I think the race director thought I broke my leg doing this when I immediately fell over in pain. Nope, no breaks -- just a giant, debilitating calf cramp is all.


My final time was 4:51, which was good enough for 3rd place that day, but I was just happy to be alive.

And happy that I saw this Zombies Hate Fast Food shirt.


What was the hottest, toughest race/run you attempted this summer? Would you do it again? I like the challenge of the heat (even though I hate it in the moment) because I know it's going to make me so much stronger for the fall/winter races. But it takes it out of me for a couple of days afterwards when I give a huge effort on a really hot, humid day. So, yes, I would do it again! And Choccolocco 50K still wins the prize for the hottest, worst race of my summer.

Do you ever get useful running awards? The frying pan was up there, but we also sometimes use the mugs they give out as prizes too. But I would have to say that cash is the most useful of all. Too bad I never win any of that!