One pack was hanging on my right shoulder to house my warm clothes when I shed them at the aid station, and another pack with extra shoes, socks, and food for my runner was hanging on my left. Squarely in-between, my Camelbak was already filled and strapped on tight. It was 3 a.m., and my family was all still snoozing somewhat soundly in their tents in the middle of our primitive campsite a half mile from the Bull's Gap aid station, the 85-mile mark at the Pinhoti 100. I snuck off as quietly as I could to hop on the trail and join the quiet shuffle of runners making their way through the dark to the aid station. I looked a lot different from them because I was bundled up in a puffy jacket, I had been sleeping, and my legs didn't feel like someone had been trying to rip them off for the previous 21 hours.

The runners started at 6 a.m. the day before to travel 100 miles through Alabama's Talladega National Forest. We heard the first runners start slipping past our campsite (mile 84.5) at 9 p.m. My runner was due into the aid station anywhere between 3:30 a.m. and 7:30 a.m. As I descended into the aid station a group of about twenty people huddled together around a fire were cheering for me. I mumbled sleepily to them that I wasn't a runner, but they kind of made me wish that I was.

Once I made sure that my runner hadn't already passed through the aid station (my biggest fear of pacing), I settled into warming my legs by the campfire and searching the woods for unoccupied "toilets." While sitting by the fire, I spent a lot of time being fascinated by the ritual of the aid station. Runners would come into the aid station and people (maybe their crew, maybe the aid station workers) would immediately surround them and start performing the rituals of feeding them, changing their shoes, powdering/vaselining their feet. And it all happened with minimal talking, the evidence of experience from the previous 85 miles.

I was also trying to watch out for Jeremy's crew chief (a person who coordinates your care, pacing, supplies for the 100 miles), Greg, to get an idea of what kind of shape Jeremy was in. At some point (time was foggy), I heard someone talking right behind me and realized that it was Greg, and there is no telling how long he had been standing right beside me in the dark before I recognized him.


He already had a collection of stories to tell me about the previous 24 hours of trail madness. Some turned out well, like the doctor who just happened to be waiting to pace someone 500 feet from a racer who started to have seizures and the guy who just happened to have a car jack to loan out when our crew locked their keys in the car in the middle of the night. There were also lots of sad stories about trail warriors who had already been forced to give up the 100-mile fight. As we talked about each one, I felt like the final players in Survivor who have to walk by each name of the ousted players in the game and remember something about them.

And of course he gave me an update on Jeremy, who I fully expected to be in 100% zombie mode by the time he arrived at mile 85. He would already have been awake and running for for more than 24 hours by the time he would meet me, way past the point of requiring a nap.

Shortly after I found Greg, Jeremy popped over the hill and ran, not hobbled, down the hill into the aid station. He sat down in a camping chair, and I kneeled down beside him to follow the ritual that I had seen performed dozens of times while I waited. I was surprised to be able to carry on an actual conversation with Jeremy. Feeling sure it was a fluke, I focused on helping him get his necessary fuel (hot soup, Coke, and an energy drink) and shoe change. I pulled Micheal, who had just paced Jeremy for the previous 40+ miles, aside to get the real scoop. Michael had been doing an amazing job of pushing Jeremy forward through the night, forcing him to cut short his time at the aid stations.

My favorite story, heard from both Jeremy's and Michael's perspectives, was that Jeremy was trying to get a cup of boiled potatoes at an aid station, and Michael, who had already warned Jeremy to hurry up, just took off without him. No time wasting! So Jeremy grabbed his cup o' potatoes and attempted to scarf them down on the run. Running plus eating boiled potatoes equaled upchucked potatoes. I figure that half the things I heard were made up or hallucinated in some way, but for some reason, I can't get enough of running vomit stories.

But, for real yo, pushing through the aid stations is a perfect strategy. Michael is usually a super laid back kind of person, but he's also good at trail math. If you spend 10 minutes per aid station at Pinhoti, you'll have tacked on three hours by the end. Probably at some point (specifically at Pinnacle, the most welcoming aid station because it was run by our hometown BUTS crew) Jeremy was annoyed that he was getting pushed through the aid stations, but by the time he got to me, he was all business. He even left me at the last aid station, and I had to quit stuffing my face with brownies (a running first for me, but the volunteers kept swearing that they were amazing) to catch up. 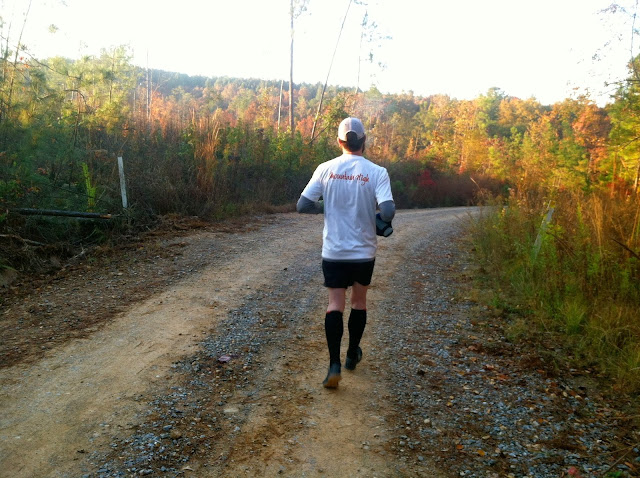 So instead of a zombie runner, I got a super intense version of Jeremy. The closer he got to the finish, the more determined he got. I would say that in normal trail running and racing life, Jeremy is relatively laid back (from my perspective anyway). We're all a little competitive when it comes to racing, but you know how some people are just really intense about it. Jeremy is typically chill on race days, and he spouts off minimal trash talk. Because he had taken it easy at the beginning of the race (i.e. a very smart strategy when running 100 miles), his legs still felt great when he got to me, so we were even running up some of the hills, which we would usually use for a hike break. There were a lot of people hiking and in survival mode at the end of this race, and every time we passed someone, I swear that it made Jeremy run faster. So much so that at the end of the race, when we popped out on a couple of miles of pavement on the way to the finish line, I looked down at my Garmin and saw 9:??s and 8:??s for our mile averages. What the heck -- who does that at the end of running 100 miles?

I also expected Jeremy to be incoherent and possibly hallucinating, which is a typical side effect of running for over 24 hours. Although he did go heavy into calculations, meaning he was calculating end times over and over and over again, he was able to correctly add numbers. I personally found that impressive, because I can't figure out 1 + 1 with race brain. As far as I know, he didn't hallucinate at all, and he kept talking and laughing right on to the end of the race. Pretty much everything I expected to find was the opposite. Instead of a zombified, incoherent, hobbling runner, I got an energetic, saucy, competitive runner. There were a couple of points, like when he was sprinting up hills, that I wondered if I was actually going to be able to keep up with him for the final 15 miles. I didn't look at his final times, but if he didn't run those last 15 faster than any other segment in his race, I would be surprised. His final time was 27:26. That's 27 hours not minutes, y'all. Just amazing.

Observations about this specific race: Pinhoti is a point-to-point 100 miler and includes some pretty tough, hilly running during the night portion. There are also some water crossing that can be rough if your feet are sensitive to running while wet. I saw a lot of pics of gnarly blisters after this race, but my runner made it through fine with some toe socks. From what I heard, he changed socks at least once, and I helped him change shoes at mile 85 (he probably that before as well). Plus they took their time to pick their way through the water so as not to get too wet. The final 15 miles are pretty runnable on fire roads and some easier trails.

The aid stations that I saw were well stocked, except one had run out of coke. I think that is illegal during a 100 miler. Also it should be illegal to run out of belt buckles at the finish. When we (by that I mean Jeremy who actually ran 100 miles) busted our butts to haul it into the finish, the no belt buckle part was extremely anticlimactic. Word is that they ran out. He was finisher 95 of 164. I'm not sure when they ran out, but even if he was the first one to not receive one, that is a lot of anticlimactic finishes.

Also there was no food at the finish. Maybe this is normal for 100 milers? Like not even a bag of chips. I think they had some water bottles somewhere. I'm not sure if all 100 milers end like that, but it felt kind of sad after all that work. Does anyone know if that's normal?
Edit: Someone just let me know that there was food across the street at the parks and rec building. So if you finish and don't see any, ask for directions. Thanks for the tip, Jennifer!

Do I want to run 100 miles straight? Of course! Before this, I definitely thought this was not on my list of goals, but honestly, it just looked so fun. And my friend Danny Haralson promised to crew for me if I do! Ok, so he vaguely mentioned that in passing, but now that it is on the internet with an exclamation point, it is true. I have decided that it is important to pick the 100 miler that is close to home and has the best belt buckle.

So here are three options:

Since this is a new race for 2014, there is no official belt buckle picture yet, but the scoop is that it will be based on this photo. I love a good lighthouse. And the race directors for this one are my favorite people on the planet earth.


But my real favorite belt buckle is from the Zion 100, where they use materials from the course to make a different buckle for all the finishers.

I freaking love it. But it's so far away that it would probably be impossible.

Which race would you choose? And don't try to bring up race logistics or anything relevant! All voting is based strictly on coolness of the belt buckle.

Do you have any desire in your heart to run a 100 miler? I seriously hope my husband does not read that part about how I think this sounds like a really fun idea.
Posted by Yo Momma Runs at 12:17 AM