Aid station volunteering: all the fun of racing without needing to vomit

Do y'all remember Ruben Studdard? You know, the American Idol contestant, possibly winner (I can't remember and am too lazy to Google it), who's from Alabama plus was recently on Biggest Loser. Well, he started a half marathon here in Magic City (nickname for Birmingham) that just finished its third year.

I really like that this race tours a historic part of Birmingham that is usually left out by other races because it's too "rough." I'm sure somebody reading this can point out how this area statistically has more crime, but when I first moved here, I used to run this route safely all the time with my brother. Now that I've moved on to running trails and the Saturday morning long run with the Birmingham Track Club, I don't see this side of town as much, and I miss it. It's a cool area with sites like Birmingham Southern College, Legion Field, and Rickwood Field, and the people were always friendly to us.

The bad part to me is that there aren't as many built-in water stops in the area (like playgrounds with public restrooms), so it makes doing long runs there difficult unless you plant water stops in advance.

But on race day, the runners don't have to worry about water because this truck dude had a bed full of jugs for the water stops, one at which I was volunteering. 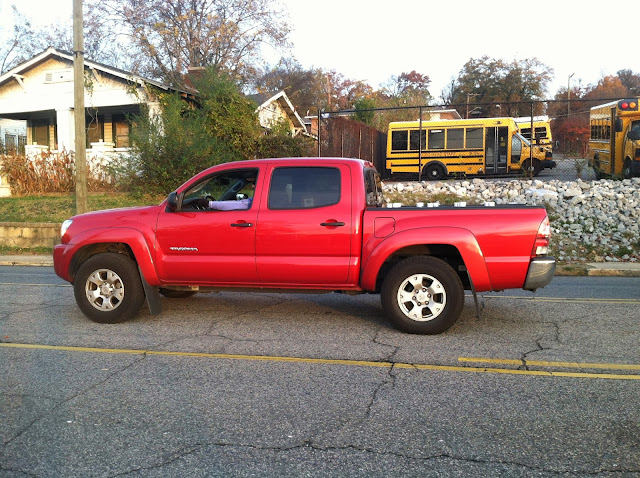 I've volunteered for some trail race aid stations, but somehow, I've never signed up to work a road race before now. There is definitely a different water strategy at road races, and it was fun trying to figure out how to accommodate a) the really speedy runners who grab cups on the go and b) the giant throng of runners that you have being the first water stop of a race. We were at mile 2, so probably they didn't have as much of a problem with the giant runner cloud as things spread out along the course. 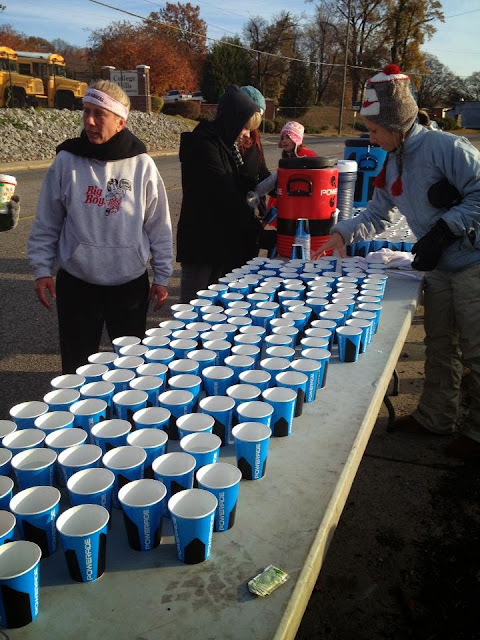 Our aid station was organized by Resolute Running (my coach's team!), so I knew most of the folks volunteering. But we had some extra helpers too. 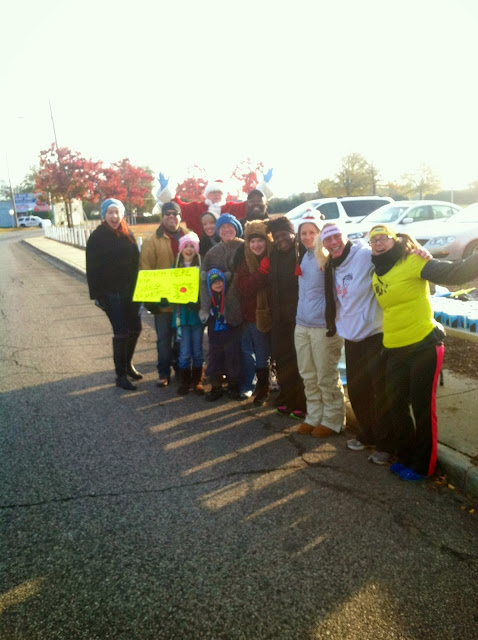 The best extra helper was the tiny baby zipped into my brother's jacket. She brought the panache. 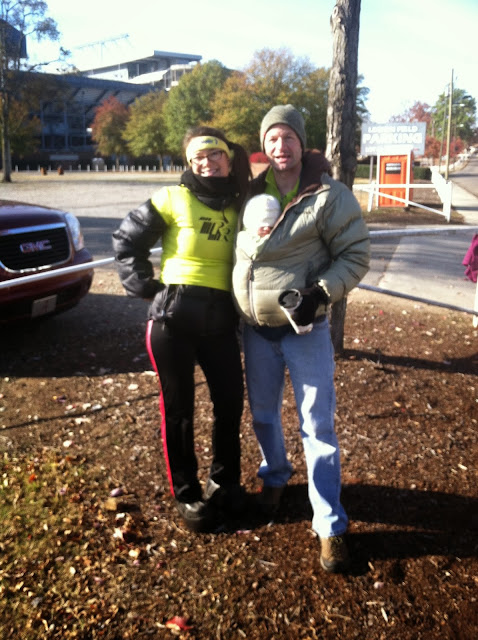 The best parts of our water stop: 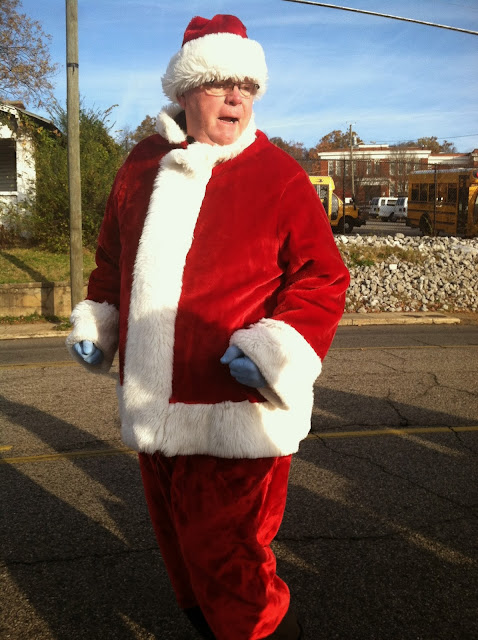 Kids to hold signs like this. These signs lose some of their power when adults are holding them. Mega wigs. Oh, and yes, that's me in the background rocking the baby tee over the puffy jacket (the temps were in the 10s, or at least that's how it felt), Spice Girl platforms, and a side ponytail. The official theme of the water stop: being awesome. 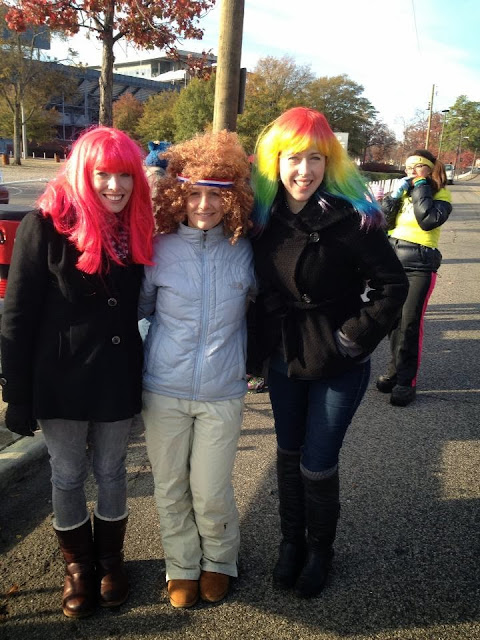 Diane, my gym buddy who is married to the dancing Santa, didn't leave me hanging on the side ponytail. It's actually more comfortable to have a side ponytail than I thought it would be, and it works better if you are trying to do sit-ups or shavasana, both of which I was not doing at the water stop. I'm going to start the Bring Back the Side Ponytail campaign. Except I think the hipsters are already on that. 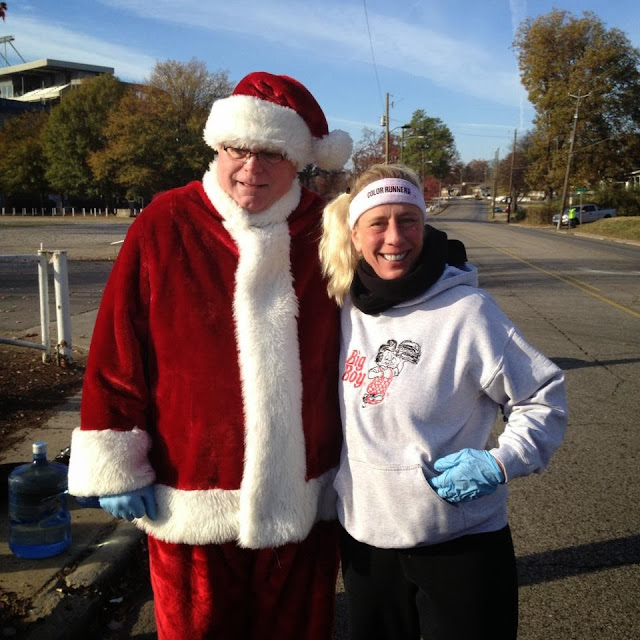 One thing that worked for handing out water: holding your hand out flat, palm up, so that runners can just quickly grab the cup off the top of your hand.

One thing that didn't work: getting so into your own dance moves that you accidentally dance too far away from the table to get replacement cups quickly.

Do not even try to beat us in a dance battle!


Because we were the first water stop, we finished the job in less than an hour after the race start and still had time to go back and cheer on runners. So I would highly recommend working aid station numero uno at any race. Also, if in general you love the energy of races but sometimes don't want to run until you feel like vomiting, water stop volunteering is the perfect fit for you. All of the excitement of racing, but you don't feel like dung afterwards.

This was a far cry from sitting in the woods for hours at a trail race station where you will maybe see five runners simultaneously. We were bombarded by hundreds of runners for a 20-minute frenzied stretch, with a trickle of runners before and after the madness. At trail races, runners usually stop at aid stations, at least to grab a quick drink. No one is standing there handing you a cup as you fly by, usually. Typically you only run through a trail aid station if you have already packed all of your own supplies (e.g. you are Joel Maxwell, local friend who packed like he was trekking west at our last 50K).

At a road race, I try and run through all the aid stations, and it can get messy. At Savannah, I knocked about five GUs off of a table trying to grab one at race speed.

Do you run through aid stations at races?

Describe your dream aid station. Mine has hip hop music (preferably Snoop Dogg) blasting, homemade almond butter energy balls (no, I've never seen these at a race, but it is my dream), Steaz energy drinks, and some people dance battling.

If you could pick one person to go head to head with in a dance battle, who would it be? My pick would be Justin Timberlake, all the way. He's got skills.

Side note: first day officially back to running after Thanksgiving, and my legs felt like bricks! Seven miles on the schedule tomorrow.
Posted by Unknown at 11:12 PM